Langerhans Cell Histiocytosis (LCH) is a rare neoplastic disorder characterized by the proliferation of Langerin (CD207) positive, CD1a positive, and S100 positive myeloid progenitor cells which contain Birbeck granules on microscopic analysis (Figure 1). LCH can infiltrate most organs, classically producing osteolytic bone lesions (77%), an erythematous popular rash (39%), and/ or oral lesions [1]. LCH is most commonly seen in children (4-5 children per million annually) [2]. Although adults, more frequently men with a mean age of onset of 33-35 years-old [3], may be affected as well (1-2 adults per million annually) [4]. Multisystem LCH, which often leads to dysfunction of the liver, spleen, and bone marrow, has a poor prognosis even with optimal treatment [5]. Xanthogranuloma (XG) is a non-Langerhans cell histiocytic proliferative disorder that is characterized by one or more benign, self-containing cutaneous nodules typically appearing in infancy [6]. There are no well described nodular predilection sites for adult XG [7]. However, juvenile xanthogranuloma (JXG) predilection sites include the head and neck, but cases of extracutaneous, truncal, and extremital nodules have also been reported [6,8]. The occurrence of concurrent Langerhans cell histiocytosis and non-Langerhans cell histiocytosis is an unusual event. There is a known, complex relationship between the development of LCH and XG. However, the histogenesis of both disorders is not well defined. Here we report a 59-year-old man with a rare case of perianal LCH who presented two months later with XG of the right abdomen. 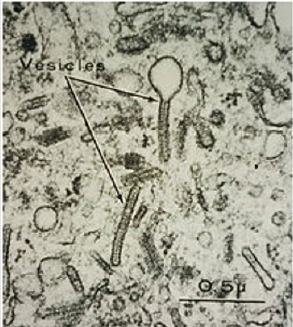 Figure 1: Electron microscope imaging of Birbeck Granules within the cytoplasm of Langerhans cells.

A 59-year-old male initially presented to the clinic with anal discharge. Physical examination revealed an infected 2.5 x 2.0cm perianal mass with surface ulceration. The mass was excised and processed. The gross examination revealed a skin covered mass. Margins were inked and specimen was entirely submitted in 4 cassettes. Hematoxylin and eosin stained slides showed skin with surface ulceration and sheaths of infiltrative histiocytic-like cells with nuclear folding, intra-nuclear grooves, and abundant background eosinophils (Figure 2). Additionally, tumor cells penetrated the subcutaneous tissue and were present at resection margin. Mitotic figures were present with approximately 10 mitoses per 10HPF. On immunohistochemistry staining with review of appropriate control tissue, the tumor cells were positive for Langerin (CD207), CD1a, S100, and CD68 (Table 1). A positive BRAF stain was also obtained at an outside institute, indicating a BRAF V600E mutation. Given the positive stains for Langerin, CD1a, S100, CD68 (Figures 3-6) and negative stains for pancytokeratin (Figure 7), a diagnosis of LCH was suspected. After excision of the mass, the wound was left open to drain and the lesion resolved over a few months without any further intervention or treatment. 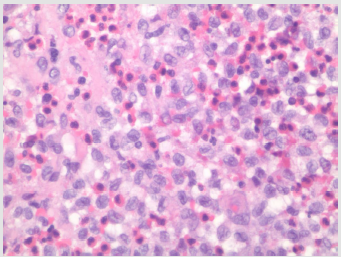 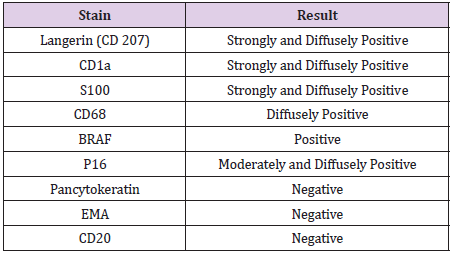 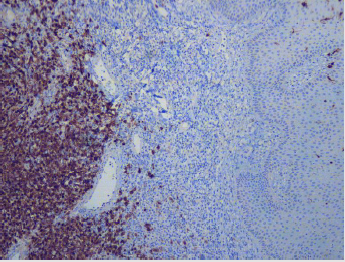 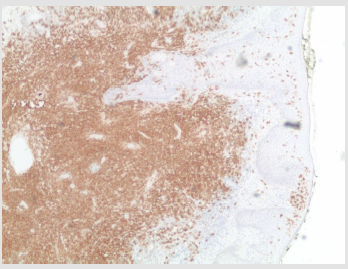 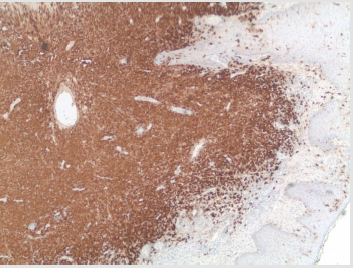 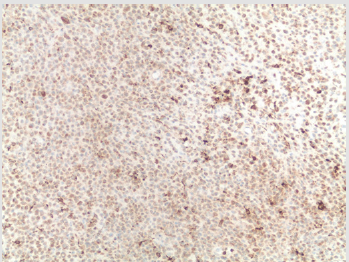 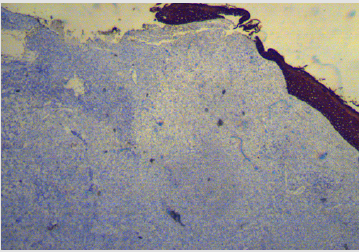 Two months later, the same patient presented to a different clinic with a right abdominal cutaneous lesion. A 0.4cm punch biopsy of the lesion revealed a nodular infiltrate of cells with abundant pale homogenous appearing eosinophilic cytoplasm with moderately large oval nuclei and interspersed lymphocytes, neutrophils and eosinophils. Some cells with lipidized cytoplasm were also noted. On immunohistochemistry, the right abdominal cutaneous lesion stained negative for Langerin (CD207), negative for CD1a, faintly positive for BRAF, and positive for Factor XIIIa (Table 2). These immunohistochemical findings suggest a diagnosis of adult xanthogranuloma. The patient was later lost to follow-up.

The pathophysiology of LCH is not well understood. LCH may spontaneously regress, suggesting a reactive nature, however monoclonal populations point towards a neoplastic condition. Biopsy of LCH reveals mixed cellularity with Langerhans cells, eosinophils, neutrophils, and lymphocytes. In addition to staining positive for CD1a, S100, and Langerin/CD207, 57% of LCH are positive for BRAF V600E mutations which is associated with higher risk of disease [9,10]. Langerhans cells contain Birbeck granules (Figure 1), rod-shaped organelles commonly described as “tennis rackets”. LCH most often presents as a single system disease, most commonly involving flat bones of the axial skeleton (ribs, pelvis, and skull) [11]. Single system LCH has also been described as involving the skin, thyroid, lymph nodes, thymus, or pituitary gland. Skull or pituitary gland involvement may present with Diabetes Insipidus [2]. Lungs are also commonly involved in adult LCH and 90% of pulmonary LCH cases are associated with smoking [12,13]. Additionally, perianal LCH has been seen in adults [14- 18], but this represents an uncommon site for LCH involvement. LCH may be difficult to diagnose without immunohistochemistry as it can involve many organs and present similarly to diseases such as Erdheim-Chester disease (ECD), Langerhans Cell sarcoma, multiple myeloma, and Juvenile Xanthogranuloma (JXG). ECD is a rare non-Langerhans cell histocyte disorder that may present with similar bony infiltration, a BRAF V600E mutation, and cutaneous lesions [19]. The patient’s perianal lesion was positive for BRAF V600E. However, ECD is negative for CD1a and Langerin. In this patient, Langerhans cell sarcoma was also ruled out due to lack of required threshold for cytological atypia. Additionally, multiple myeloma can present with similar lytic lesions within flat bones of the axial skeleton and was subsequently ruled out with immunohistochemistry.

JXG is another rare non-Langerhans cell histiocytic disorder characterized by one or more yellow, red papulonodular lesions, typically presenting in infancy, that stain negative for Langerhans cell markers (Langerin/CD207, CD1a, S100) and positive for Factor XIIIa [20]. Given the patient’s immunohistochemical findings, a diagnosis for xanthogranuloma of the right abdomen was made. The occurrence of concurrent Langerhans cell histiocytosis and non-Langerhans cell histiocytosis is an unusual event. While rare, cases of developing xanthogranuloma (XG) as a sequela of LCH have been reported in children [21] and as a consequence to chemotherapy in adults [22-24]. The patient in this case report was not given a chemotherapeutic agent for treatment of his LCH. As far as we know, this is the first known case of adult perianal LCH and concurrent XG in the literature.

Although rare, LCH can involve uncommon sites including the perianal region. Immunohistochemistry work-up is needed in order to differentiate LCH from other histiocytic lesions such as Erdheim-Chester disease, Langerhans Cell sarcoma, multiple myeloma, and Juvenile Xanthogranuloma. To our knowledge, this is the first documented case of perianal LCH and xanthogranuloma appearing concurrently.

No other data or other supporting materials were collected or used for this report.

The authors have no conflict of interest.