Epidemiological Study of Antibiotic Self-Medication in Tehran 1399: A Descriptive Study

Background: Self-medication is the use of medication to prevent, treat, or control the symptoms of illness, and often involves a combination of therapeutic resources, over the counter (OTC) medications, and antibiotics. Improper use of antibiotics and poor monitoring make antibiotic resistance a global health crisis, and the situation is exacerbated by the difficult discovery and production of novel antibiotics.

Materials and Methods: A cross-sectional descriptive study using questionnaire was conducted during the period from January 2020 to March 2020 targeting people who are living in Tehran.

Conclusion: This study showed a very high prevalence of antibiotic self-medication that can lead to the development of microbial resistance and failure therapy. Therefore, educational interventions targeting the general public, pharmacists, and health care students are of particular importance.

Self-medication is the use of medication to prevent, treat, or control the symptoms of illness and often involves a combination of therapeutic resources and the use of over the counter (OTC) medications, including antibiotics [1]. According to the World Health Organization, self-medication means the selection and use of medications by individuals to treat self-diagnosed diseases or symptoms. Self-medication is a relatively widespread practice around the world. Developed and developing countries focus on self-medication as a component of health care policy [2]. It has also been suggested that self-medication can help prevent and treat diseases that do not require medical advice and provide a cheaper alternative to treating common diseases [3]. In fact, self-medication is a part of self-care, which has greatly contributed to the efficient use of the health care awareness system with all its legal aspects [4].Antibiotics are the first successful class of drugs that can cure diseases and are effective in treating many infections [5]. Proper use of antibiotics (correct medication, correct dosage, and course of treatment) can prevent Create an infection, treat, and prevent the infection from spreading. Antibiotic resistance is the ability of a pathogenic microbe to develop resistance to the effects of an antimicrobial (antibiotic) [6].

Antibiotic abuse and poor monitoring have turned antimicrobial resistance (AMR) into a global health crisis, and the situation is exacerbated by the difficult discovery and production of novel antibiotics [7].In recent years, various studies on antibiotic selfmedication have been conducted in different parts of the world to identify the prevalence, risks and factors associated with antibiotic abuse [8-11]. The World Health Organization announces the sale of drugs without Prescription is challenging in most countries [12], however, according to a 2017 study, it is estimated that more than 50% of antibiotics are purchased without a prescription and are used without a prescription in most parts of the world [13]”. Various studies state that the incorrect use of antibiotics among individuals is due to lack of awareness about the authority use of antibiotics or insufficient information [14-16]. However, one study states that despite sufficient knowledge about the side effects of self-medication with antibiotic, self-medication with these drugs is common [17]. In this regard, most studies of education and community awareness are considered important and necessary in the prevention of self-medication with antibiotics [14,18].

The present study was a cross-sectional descriptive study that was conducted in the spring of 1399 (April to July 2020) on community members (including students, ordinary people, businesses, passers-by, and patients in Tehran). It was done with ethical considerations. After designing the questionnaire, ordinary people in the community entered the study with the condition of consent to participate in the project. All questionnaires were anonymous. Participants were assured of confidentiality. Questionnaires were filled out by researchers in each section. Data collection tool in this study was the use of a written questionnaire that information was completed using two methods of selffulfillment for literate participants and interviews for illiterate people. The questionnaire included questions in the form of two axes of personal information and self-medication habits with antibiotics and its causes. Each questionnaire was numbered, and coded information was extracted.

SPSS 23 software was used for statistical analysis. Data significance level was considered 5% (P-Value <0.05). Descriptive statistics analysis was performed, and the prevalence of selfmedication with antibiotics was calculated. The same descriptive analysis was used to calculate the frequency of causes of selfmedication with antibiotics and drug classes usage.

In this study, 932 people in the community were studied, of which 764 (82%) were self-employed and 168 (18%) were other people (companion or parents) who answered the questionnaire. The mean age of the participants in this study was 62 ±39. Out of the total population, 800 (86%) had self-medication with antibiotics during the last 6 months. Self-reported diseases are listed in the (Table 1). Sore throat (pharyngitis) was the most important cause of antibiotic self-medication. Cough (with or without sputum) and runny nose were two relatively common causes of antibiotic selfmedication. Genital infections (such as vaginitis), diarrhea, and urinary incontinence are less common causes of self-medication with antibiotics.Several antibiotics have been used for selfmedication. Amoxicillin 226 cases, cephalexin 204 cases, cefixime 155 cases, azithromycin 126 cases, erythromycin 40 cases, ampicillin 30 cases were the most used antibiotics. The following were used by 19 cases: ceftriaxone (ampoule) 8 cases, cefazolin (ampoule) 6 cases, penicillin G 4 cases and clindamycin (ampoule) was 1 case.Participants were asked to change the dose of antibiotics used during self-medication. 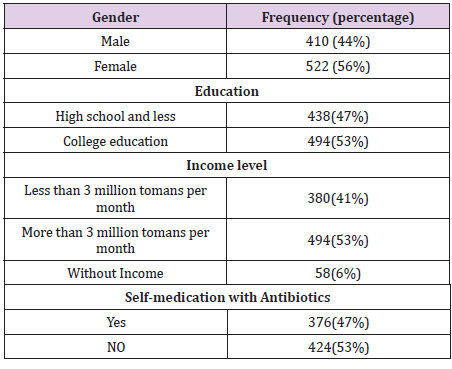 Table 1: Demographic information of the participants.

(43.25%) said they did, and 354 (44.25%) said they did not change their dose.100 cases (12.5%) also stated that they did not know about this. Participants were then asked why the dose of the drug was changed. The results are shown in (Tables 2-4).The most common reason for increasing or decreasing the dose of the drug was to accelerate the recovery process. Also, reducing the side effects of the drug such as diarrhea, nausea and heartburn and insufficient medication were the second and third reasons for changing the dose of the drug.Participants were asked when to discontinue antibiotic self-medication.357 patients (44.5%) after the disappearing of symptoms, 258 patients (32.5%) after drug running out,100 patients (12.5%) after completing the treatment period and 85 patients (10.5%) discontinued antibiotics after a few days, regardless of the outcome. Respondents were then asked “after completing the treatment period” what source they learned about the treatment period. 38 people experienced previous doctor visits, 37 people with medication information (catalog or brochure), 17 people consulted a pharmacist, and 8 other family members experienced antibiotic treatment. 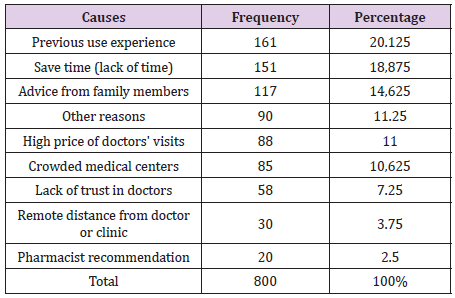 Table 2: Frequency distribution, by different causes of selfmedication with antibiotic. 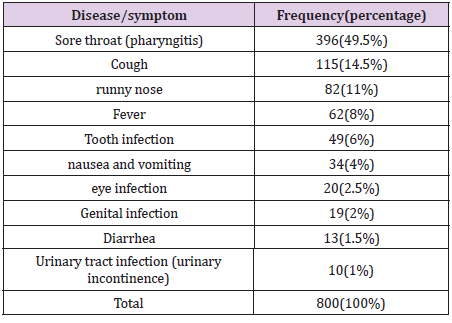 Table 3: Frequency distribution of disease which self-medicated with antibiotics.

Amoxicillin and cephalexin are the two most commonly used antibiotics in this study. Amoxicillin is the most widely used antibiotic for self-medication in many countries [9,18,22,27]. Amoxicillin and potassium amoxicillin / clavulanate are considered as effective and safe first-line antibiotics for upper respiratory tract infections such as pharyngitis and otitis media [28,29]. It seems that high use of amoxicillin may be limited due to its low cost, easy availability, and limited side effects [30]. Amoxicillin and macrolides are also the most common antibiotics prescribed and patients tend to use these prescriptions as a reference for similar diseases in the future [31,32]. Also, since the most common disease treated with antibiotics was sore throat or pharyngitis, and amoxicillin is a good treatment for pharyngitis, amoxicillin had the highest rate of selfmedication. Although many cases of sore throat or pharyngitis are related to viral infections and need not to be treated with antibiotics, this study is limited to confirming the bacterial infection of self-treated pharyngitis.In this study, antibiotics were commonly used for sore throats, cold symptoms such as cough, rhinorrhea, and fever.This is consistent with other studies, and several studies confirm that the most reported cases of antibiotic self-medication included sore throat, cold, cough with sputum, flu-like symptoms, pain, fever, and runny nose [22,33,34].

The four main sources of information about self-medication with antibiotics reported by the participants of this study: previous experience (23%), medication prescription (catalog or medicine box) (21%), consultation with a physician (19.5%), search On the Internet (10%), however, a study by health care professionals identified the most important source of antibiotic information [15].A serious finding in the present study was the change in the dose of antibiotics used. Less than half of the subjects changed their dose of antibiotics during the course of self-medication with antibiotics. This is consistent with a similar study [35]. The most important reason for changing the dose of the drug was to accelerate the recovery process. Patients appear to be seeking antibiotics for symptomatic treatment and expect symptoms to improve with decreasing or increasing the dose of the drug. Less than half of the population stopped taking antibiotics after their symptoms disappeared. Only one-third of patients stopped taking antibiotics after taking the drug (which does not necessarily mean ending the course of treatment). More than 10 percent of the population stopped taking antibiotics after completing the treatment period, often learning about a previous doctor’s visit and the instructions in the medication brochure about the treatment period.

The results of a study show that people often inform the pharmacist and doctor about the course of antibiotic treatment [35].There are several limitations to this study. The cross-sectional study design limited our preference for causal inference between self-medication with antibiotics and related factors. Although self-reported data may contain a reminder bias, our findings were almost consistent with most other studies. Antibiotic selfmedication may vary from population to population, such as medical students. Given that only one province was surveyed, these results cannot be generalized to the whole country. Selection bias was also established by setting a 6-month limit for antibiotic selfmedication.

This study showed a very high prevalence of antibiotic selfmedication, which can lead to the development of microbial resistance, antibiotic resistance, and treatment failure. This study also shows that amoxicillin, cephalexin and cefixime were the most commonly used antibiotics for self-medication. Previous experience and lack of time were the most important reasons for selfmedication with antibiotics. Sore throat and cold symptoms (such as cough, runny nose, and fever) were the most important symptoms for self-medication. A relatively large proportion of people changed their antibiotic dose, which was the most important reason for accelerating the recovery of the disease.Educational interventions targeting the general public, pharmacists, and health care students are of particular importance. It was considered a powerful tool to increase the rational use of antibiotics in the community and improve patients’ behavior regarding the use of antibiotics. Physicians and pharmacists should be encouraged through national health programs to provide more information about the proper use of antibiotics and their importance to individuals or patients when prescribing or distributing these drugs.

This section is not mandatory but may be added if there are patents resulting from the work reported in this manuscript.

The study was not financially supported.

The authors are thankful to all the respondents for their voluntary participation in research.

Epidemiological Study of Antibiotic Self-Medication in Tehran 1399: A Descriptive Study

Background: Self-medication is the use of medication to prevent, treat, or control the symptoms of illness, and often involves a combination of therapeutic resources, over the counter (OTC) medications, and antibiotics. Improper use of antibiotics and poor monitoring make antibiotic resistance a global health crisis, and the situation is exacerbated by the difficult discovery and production of novel antibiotics.

Materials and Methods: A cross-sectional descriptive study using questionnaire was conducted during the period from January 2020 to March 2020 targeting people who are living in Tehran.

Conclusion: This study showed a very high prevalence of antibiotic self-medication that can lead to the development of microbial resistance and failure therapy. Therefore, educational interventions targeting the general public, pharmacists, and health care students are of particular importance.