Glaucoma is a steady degeneration of retinal ganglion cells (RGCs) and optic nerves axons. 66 million people are worldwide affected by the glaucoma. Based on pathophysiology, anatomy glaucoma is classified as close-angle glaucoma and open-angle glaucoma. Several factors contributing to glaucoma are increased intraocular pressure (IOP), Migraine headache, family history, systemic hypertension. Severe eye pain, headache, nausea, vomiting and visual blurring are the main symptoms of glaucoma. Tonometry, Pachymetry, Gonioscopy are some of the tests used for the analysis of glaucoma. Different treatments are now available to treat glaucoma.

Glaucoma is a gradual degeneration of retinal ganglion cells (RGCs) and optic nerves axons. Retinal ganglion cells are the neuron cells of central nervous system, cell bodies of neurons are present in the interior retina and their axons are present in optic nerve. Actual Biological basis and factors contributing to the progression of glaucoma are still not fully understood. Main reason yet known for glaucoma is the increased intraocular pressure within the eye, which is responsible of the degeneration of retinal ganglion cells and nerve cells. 66 million people are affected by the glaucoma worldwide. Several factors contributing to glaucoma are increased intraocular pressure (IOP), Migraine headache, family history, systemic hypertension, high myopia, cardiovascular disease, prior nerve damage, peripheral vasospasm, Visual damage caused by glaucoma is irreversible. Blindness is induced by neuronal cell death which leads to increased IOP.

Glaucoma is classified based on pathophysiology, anatomy as close-angle glaucoma and open-angle glaucoma. Both close-angle and open-angle glaucoma can occur with no identifiable cause, ensuing in idiopathic or primary glaucoma. The type of glaucoma which has an identifiable cause of elevated IOP, resulting in optic nerve damage is referred as secondary glaucoma e.g. Pseudoexfoliative glaucoma. Primary Open –angle glaucoma (POAG) is a frequent type of glaucoma with 0.58% occurrence rate in Asia Americans and in African Americans 67%. Optic nerve damage at earlier age is contributing to high prevalence in African Americans. Based on age of onset POAG is characterized as primary congenital glaucoma (start up to the age of three years), juvenile open angle glaucoma (JOAG initiate at age is 3-5 years) and adult onset POAG[1].

Primary open angle glaucoma is caused due to visual field defect, increased IOP and morphological loss of optic disk as shown in Figure 1. In early stage of glaucoma peripheral vision is affected and central vision is resistant to glaucoma. Changes in peripheral vision area can be identified by visual field testing and selective perimetry. Structural changes (loss of macular ganglion cells and retinal nerve fiber layer [RNFL] can be detected by the optic nerve imaging techniques.Open angle glaucoma is not described by the Mendelian mode of inheritance rather it involves multiple genes. In contrast, Reiger’s syndrome congenital glaucoma involves specific genes. Primary open angle glaucoma is associated with genomic mutations for example myocilin, shows autosomal dominant pattern of inheritances leading to 2-4% of open angle glaucoma in world. Therapeutic decision can be easily done after determining the disease stage and its progression[2]. 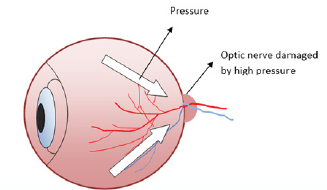 In Glaucoma, the loss of retinal ganglion cells is linked to intraocular pressure. Intraocular pressure is determined through the balance between secretion of aqueous humor by the ciliary body and its drainage through independent pathways the uveoscleral outflow pathway and trabecular meshwork. Intraocular pressure produces mechanical stress on the posterior structure of eyes, lamina cribrosa and its adjacent tissues.Glaucoma makes the sclera perforated at lamina; this is a point at which optic nerve fibers of the eye exit. Lamina is a delicate point of pressurized eye. Stress applied by the intraocular pressure may lead to deformation, compression, mechanical axonal damage, remolding of the lamina cribrosa, disruption of axonal transport. Oxidative stress excitotoxicity altered immunity and impaired microcirculation may cause glaucoma[3].

In Glaucoma, high concentration of glutamate is observed in the inner portion of the eye. Receptors of glutamate are either ionotropic or metabotropic (mGluR)[4].

Death of neurons, growth and differentiation of neurons is regulated by neurotrophins or neurotrophic factors (NTF). Neuotrophic factors are polypeptides originated from calliculus of the central nervous system and increase IOP may disrupt their transport. NTF are produced locally in the lamina, retina, optic nerve body and cribosa. Decrease in NTF results in RGC apoptosis. These factors bind and phosphorylate the Trk receptors and cause antiapoptotic effect[5].

T-cells protection axonal injury of neurons by removing pathogenic agents and destroy damaged cells, referred to as protective immunity. Survival of neuron in increased IOP condition may be possible by the activity of T-cells[6].

Glaucoma is associated with genetic/congenital eye malformations. Mutations at several loci of genes are associated with glaucoma. One third of POAG is comprised of normal tension Glaucoma and it is also linked to genetic mutations. There are 6 % chances of glaucoma to be occur in a person having family history[7].

It is frequent type of glaucoma. The occurrence of COAG elevates with age. Along with the aging process the drainage system of eye gradually gets clogged. As a result, the proper drain of aqueous fluid is disturbed. Without any symptoms or pain pressure builds up with in the eye, results to initiate the loss of vision of peripherally of eye[7].

It is uncommon and inherited type of open-angle glaucoma. It results because of improper development of drainage area before birth. Consequently, the pressure in eye is increased that lead to vision loss. In this condition the increased pressure and optic nerve damage lead to loss of vision[7].

It may be caused by decreased flow of blood to the optic nerve fibers of the eye. This situation is specified as the continuous damage to optic-nerve and lack of peripheral vision (visual field) [7].

It is a form of open angle glaucoma, which may result due to iris inflammation, eye damage, and cataract, use of systemic or topical steroids. Retinal detachment or retinal vein blockage may be associated with secondary open-angle glaucoma[7].

In early stages of chronic angle-closure glaucoma and openangle glaucoma generally have no symptoms. Infrequently patients of variable levels of intraocular pressure might have lack of clarity of vision, particularly in morning. In acute angle-closure symptoms are severe eye pain, nausea, headache, visual blurring and vomiting. In congenital glaucoma symptoms which are usually observed in few months old child is red eye, Cloudiness of the front of the eye, sensitivity to light, tearing and Enlargement of one eye or both eyes[7].

The pressure induced by IOP in the eye can be determined by estimating the firmness of eye surface through this technique. For this test there are different types of tonometer’s, most common is application tonometer. In this analysis eye is first treated with anesthetic eye drops, then tonometer’s sensor is placed against the front surface of the eye and the pressure in the eye can be determined[7].

It is one of a latest test for the analysis and treatment of glaucoma. It checks the cornea thickness. After anesthetic eye drops treatment, tip of the pachymeter is touched lightly to the front surface of cornea[7].

It is used to observe drainage area and drainage angle of the eye by marking the eye with anesthetic drops and insert the contact lens of type along with the mirror within the eye. The mirrors facilitate a doctor to analyze the interior of the eye from various angles. Gonioscopy can also find out different abnormalities, such as blocking of drainage due to abnormal blood vessels[7].

] It is a surgical method utilized to treat glaucoma. In this procedure, an opening is created by removing small part of clogged trabecular meshwork and a new drainage path is created for the fluid to flow out of the infected eye. Aqueous shunt devices (glaucoma implants or tubes) are synthetic drainage devices are employed to low the IOP in the eye. Viscocanalostomy is one more surgical process employed to decrease IOP pressure in the eye. In this procedure a short piece of the sclera (eye wall) is removed to make a thin membrane tissue from which aqueous fluid can drain out without any difficulty[7].

These drops are utilized to decrease eye pressure, either by decreasing the amount of fluid it produces or increasing the eye’s ability to drain. Beta-blockers, Prostaglandins, Alpha-stimulators, Carbonic anhydrase inhibitors, Miotics, Epinephrineare utilized along with other medicines to reduce eye pressure[7].

Drugs used to treat glaucoma are:

Glaucoma is a serious eye disorder, for which different strategies are being adopted to treat it. Patients should visit to a doctor regularly.

Glaucoma is a steady degeneration of retinal ganglion cells (RGCs) and optic nerves axons. 66 million people are worldwide affected by the glaucoma. Based on pathophysiology, anatomy glaucoma is classified as close-angle glaucoma and open-angle glaucoma. Several factors contributing to glaucoma are increased intraocular pressure (IOP), Migraine headache, family history, systemic hypertension. Severe eye pain, headache, nausea, vomiting and visual blurring are the main symptoms of glaucoma. Tonometry, Pachymetry, Gonioscopy are some of the tests used for the analysis of glaucoma. Different treatments are now available to treat glaucoma.