There are a number of hand-held cholesterol testing devices such as the CardioChek, Mission, 3in1 available. These devices measure a range of lipid fractions such as the Total Cholesterol (TC), Low Density Lipoprotein Cholesterol (LDL-C), High Density Lipoprotein Cholesterol (HDL-C) and Triglyceride (TG). One of the challenges that these hand-held self-monitoring devices such as the Mission; CardioChek and the 3in1 need to overcome to take their place in clinical practice, is the ability to transmit the data. Smart phones have data transmission capabilities using Global Systems for Mobile Communication (GSM); Wireless Fidelity (Wi- Fi); bluetooth and Universal Serial Bus (USB), making it easy to transfer the information from point of test to a centralized location where this information can be viewed by the specialist [1]. In addition, latest smart phone developments, with the use of built in or external sensors and devices to enable sample application and testing, have placed them at the centre of point of care testing [1,2]. Recently, the elemark™ lipid check, a smart phone based point of care device for self-testing of a lipid profile with transmission capabilities was described. This device can store and send the result of the measurements to a server where the patient’s clinician can gain access to the information. It was shown to correlate very well with hospital laboratory tests (r >0.97, p<0.001) for all threecholesterol blood tests: TC, HDL-C and TG [3]. We have performed a few studies on the device and found the precision of the elemark™ comparable to that of the CardioChek and it had an acceptable biological variation for TC, HDL-C and TG [4,5]. Current advances have led to the development of the smart CARD – smartphone Cholesterol Application for Rapid Diagnostic system, making it possible to measure total cholesterol. The test cartridge is fitted over the camera and the inbuilt flash provides uniform diffused light to illuminate the test strip. An application on the smart phone calibrates the image colour values on the test strip and the results appear on the phone. This device was shown to measure total cholesterol comparable to the estimations made by the CardioChek [6]. The 1drop™ TC is a total cholesterol testing device smartphone (Galaxy J3) with a specially designed mobile application that measures total cholesterol. In this pilot study, we evaluated the performance (intra-individual variation, intra-assay precision and comparative data) of the 1drop™ smart phone in measuring total cholesterol.

Within Person Variation (see Figure 1). On days 1 to 17, the total cholesterol values estimated ranged between 4.1 mmol/L -7.38 mmol/L (Figure 2). The within person variation CV% of total cholesterol in this healthy volunteer using the 1drop was estimated as 14.6%. However, this includes results on days 5 and 6 which are clear outliers. When the results of days 5 and 6 are excluded the CV% estimate was calculated as 7.2% (Table 1). 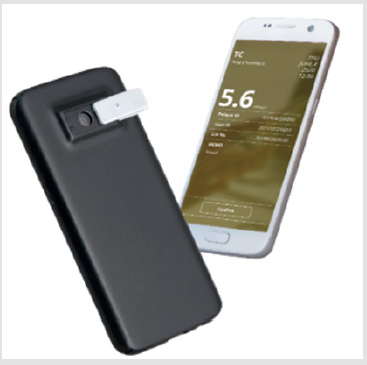 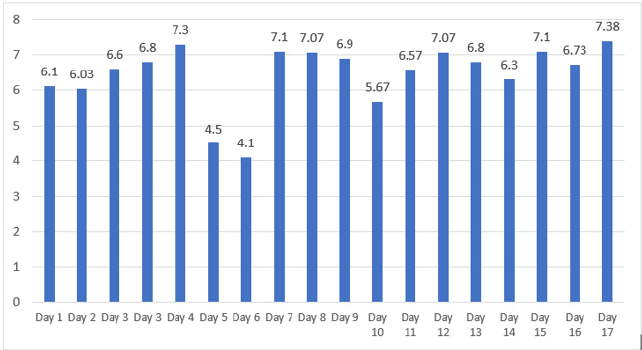 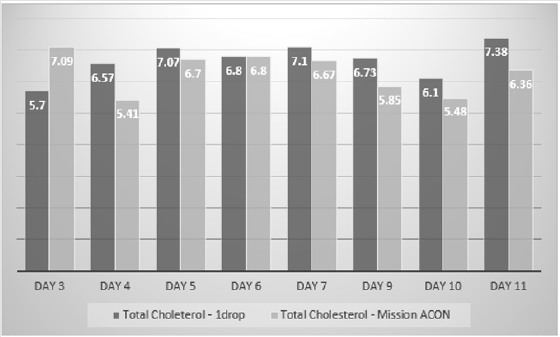 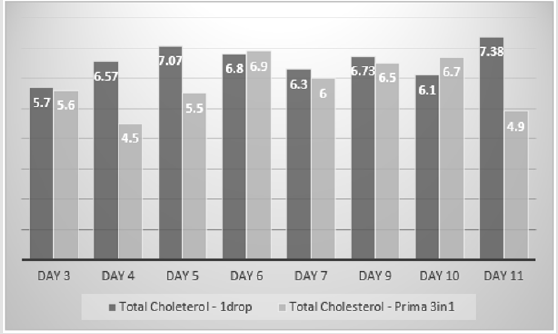 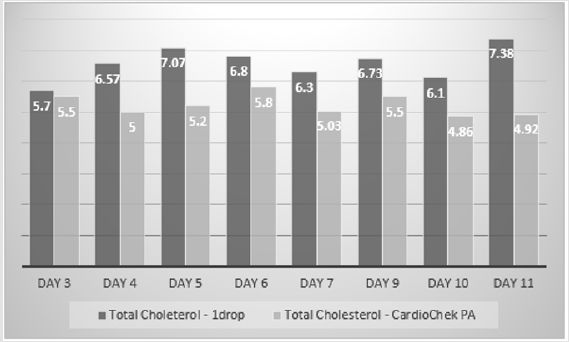 In this study, we have been able to demonstrate that the 1drop™ total cholesterol smartphone testing device has an acceptable intra-individual variation, intra-assay precision and compares well with other hand-held cholesterol testing devices. Self-monitoring of blood cholesterol, with these devices, has been shown to be beneficial. In a randomized study in patients being treated for their hyperlipidaemia, one group of patients were given the CardioChek to measure and report their lipid levels over a 6 month period by telephone and the other group had their lipid levels measured in the traditional laboratory setting. The results showed that both groups showed comparable reductions in their LDL-C, HDL-C and TG levels and there was no significant difference observed between the two groups [13]. We look forward to more studies in the real world setting to demonstrate using such devices as the 1drop and believe that the future clinical practice will include the use of such devices as the 1drop™ used routinely in the management of patients on cholesterol lowering treatment.