Diagnosis: Granulomatous inflammation, cytologically consistent with tuberculosis. After getting the initial two months of Category-1 Anti TB therapy, the general condition of the patient improved with no jaundice and right hypochondriac pain. There were no space-occupying lesions in the USG scan of the liver. The continuation phase was started (Table 1). 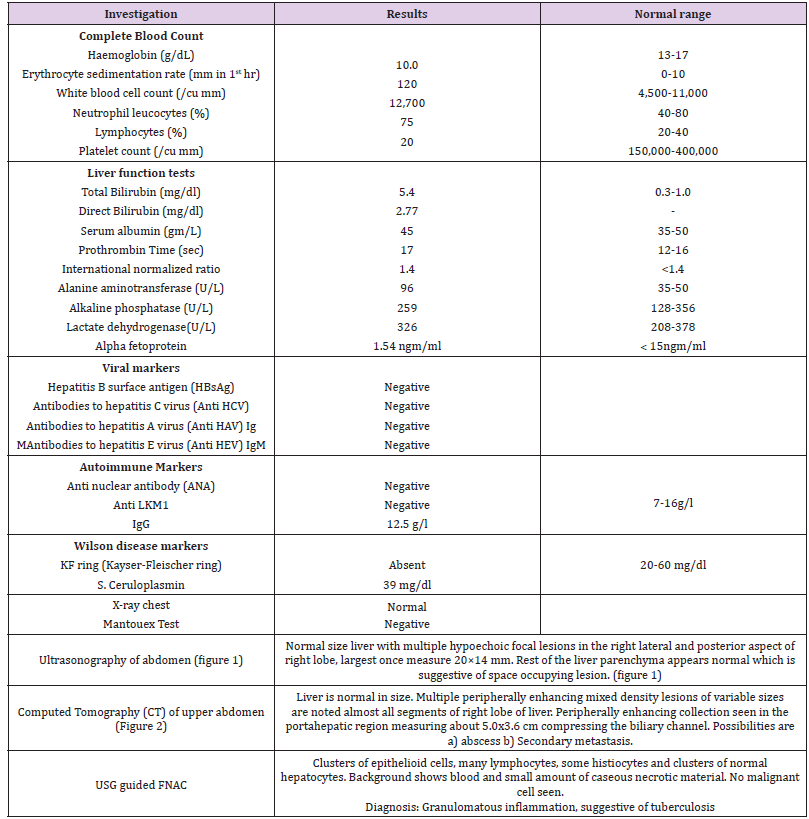 In world literature, 30-50 years are the common age group and usually presents with fever (50-90%), abdominal pain (45- 66%), and hepatomegaly in localized hepatic TB [4,5]. Various clinical features, inconsistent of clinical and biochemical findings makes diagnosis difficult of patient of hepatic tuberculosis. Nonspecific and constitutional presenting complaints include anorexia, weight loss, night sweat, fever, malaise, and abdominal pain [9,10]. Generally, tuberculosis elsewhere is the clue for the diagnosis of hepatic involvement. Epigastric or right upper quadrant tenderness is a common manifestation [10]. Hepatomegaly is a common finding and can be associated with splenomegaly [11]; On the other hand, in the extensive miliary form, splenic involvement is common [12]. Jaundice can present due to direct destruction of the liver parenchyma by tuberculosis [10], with or without obstructive processes [12]. The most frequent clinical-laboratory findings in tuberculosis of the liver are hepatomegaly (~90%), elevated serum alkaline phosphatase levels (~80%), fever (~70%), weight loss (~60%), and abdominal pain (~55%); all of them were present in our case. Moderate to a marked increase in the serum alkaline phosphatase level, along with normal or mildly increased serum bilirubin, is suggestive of hepatic tuberculosis; though these are not specific and may occur in other conditions, such as liver abscess, metastatic carcinoma, amyloidosis, echinococcosis, granulomatous diseases of other etiologies, and also inactive cirrhosis.

This type of biochemical abnormality was observed in our patient. Hyperglobulinemia and low serum albumin also suggestive of hepatic tuberculosis [13]. Normal to moderately raised aminotransferase and gamma glutamyl transpeptidase levels sometimes markedly raised are also seen. prothrombin time abnormality is a common finding in some series. Nonspecific laboratory findings, such as anemia and leukocytosis can be seen. Sometimes there is pancytopenia. Increased erythrocyte sedimentation rates are also common. In our case, most of these laboratory abnormalities were observed. Localized hepatic TB diagnosis is always difficult. Liver function abnormalities as elevated liver enzymes, hypoalbuminemia, hypogammaglobulinemia are non-specific and not helpful for definite diagnosis [4,5]. In our cases, the liver function test also did not help in a specific diagnosis. Sometimes, chest X-ray of hepatobiliary tubercular patients may show old tubercular lesions but only in <10% cases, active pulmonary TB may be observed [4]. In our case, we could not find any radiographic or microbiological (sputum for acid-fast bacilli) evidence of pulmonary tuberculosis. A similar case of isolated hepatic TB was reported without any pulmonary lesion [7]. In localized hepatic TB, ultrasound examination of the liver shows nodular hypoechoic lesion or complex mass lesion mimicking primary or metastatic tumors. In our case, USG revealed hypoechoic lesion.

CT scan has some fallacies like ultrasound mimics a tumor. In our case, both CT scans and ultrasound misled us as a primary hepatic neoplasm or solitary metastatic nodule. Imaging-guided FNAC can confirm the diagnosis, but in our case, only necrotic material but no acid-fast bacilli were not found in Ziehl Neelsen staining. For diagnosis of localized hepatic tuberculosis, Liver biopsy, either by image guidance or laparoscopic procedure and histopathology is a very effective tool. Caseous necrosis, multiple will form epithelioid granulomas, and presence of Langhans giant cells are the histopathological features of localized hepatic TB [4,5]. A caseous granulomatous lesion in liver biopsy is also observed in coccidioidomycosis, brucellosis, and Hodgkin’s disease but clinical presentation is different [5,14]. In an endemic region, the absence of acid-fast bacilli, we should not distract from the diagnosis of tuberculosis [15]. Treatment of hepatic TB includes the standard four-drug regimen with isoniazid, rifampicin, ethambutol, and pyrazinamide as for any form of extrapulmonary TB. The duration of therapy is recommended generally for 1 year. Clinical improvement is frequently seen within 2 - 3 months. Study shows that with 4 drug regime 67% of cases respond well with good clinical response. Despite the response, the overall mortality rate is 12%-42% and much higher in cases those present with jaundice (4). Adverse prognostic factors include acute presentation, younger age (<20 yr), and coagulopathy, etc for multiple large lesions and refractory lesions to medical treatment, surgery is an option [16,17]. In our case, the duration of therapy was 12 months; however, symptom relief was achieved within 2 months. Also, surgery is not required.