Aim: To compare the clinical effect of modified Pringle with traditional Pringle for vascular occlusion during laparoscopic hepatectomy.

Since the Louisville Statement in 2009, the use of laparoscopic liver resection (LLR) had gradually increased in recent years [1,2]. LLR was used for Benign tumors located at the Surface lateral with solitary lesions of 5 cm or less, located in liver segments 2 to 6. that could be resected more easily than segment VII VIII[3-7]. With the update of surgical instruments and the accumulation of surgeon experience, LLR has been expanded for Hepatocellular carcinoma treatment, major liver resections, complex hepatectomy and donor hepatectomies by experienced staff[8]. In 2016[9], the first Asia Pacific consensus meeting on HCC was held in conjunction with the 7th Asia-Pacific Primary Liver Cancer Expert Meeting in Hong Kong to declare the advantage of LH is Less intraoperative bleeding and faster postoperative liver function recovery if the procedure is performed by experienced surgeons. Laparoscopic major hepatectomy for HCC remained a challenging technique and should only be performed by experienced surgeons. However, postoperative mortality, morbility and recovery of liver function are associated with major blood loss[10] which is always the main cause of conversion to laparotomy[11] and remains a challenge for surgeons[12,13]. Pringle[14]first described the method to arrest the hepatic hemorrhage by compression of the porta hepatis and this procedure was widely spread as well as the in laparoscopic field currently. Here, we described a new modified of Pringle maneuver using Bulldog to block vascular during LLR, and compared its effects with traditional pringle maneuver.

From Dec, 2014 to Jan, 2019,200 patients underwent LLR in our department, at the 2nd hospital of Anhui medical university and in which 110 patients underwent LLR with vascular occlusion. There were 54 patients in the Bulldog group, and 56 patients in the traditional group.38 femail and 72 mail participants were included in this study, with the mean age of (56.1±10.9 and 60.0±8.8) years old, Respectively. Clinical characteristics of patients, were summarized in Table 1. 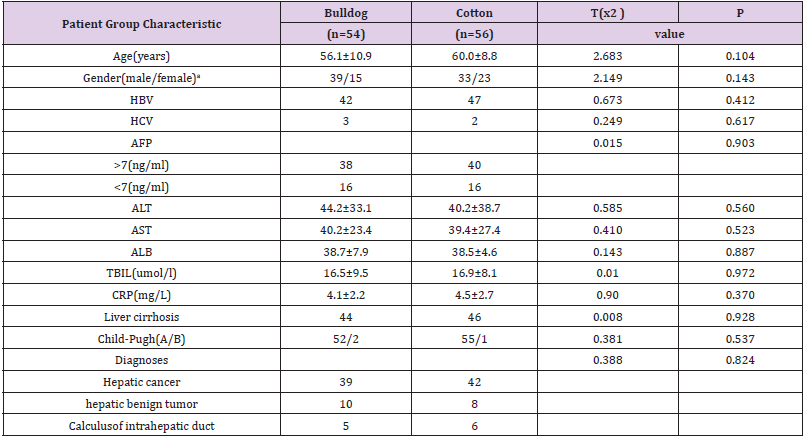 This study has been approved by the ethics committee of The Second Hospital of Anhui Medical University. Each participant in the study provided written informed consent. The inclusion criteria including:

a. All the participants were corresponded with the application of LLR, according to the Louisville Statement [2,8] and underwentlaparoscopic liver resection.

b. The bulldog and cotton tape were applied in operation.

c. The tumor did not invade main vessels.

d. Pringle maneuver clamping time was unified as 15min every time and right Glission pedicles was clamped only once.

The LLR was not limited to the disease, including benign tumor，malignance tumor, calculus disease and others (Table 1). The cases that did not agree with the inclusion criteria were excluded.

General anesthesia was performed routinely. The patients were placed in the supine position, and a 10-mm trocar was placed 2cm right the umbilicus under direct vision(Figure1). Intraabdominal pressure was established and maintained around 14mmHg and Central Venous Pressure(CVP) was set below five cmH2O[15]. The rest four trocars were placed based according to the tumor position. Intraoperative laparoscopic ultrasound was used as a requirement. Liver parenchymal transection was performed using a combination of a harmonic scalpel, ultrasonic dissector (Cavitron), and bipolar forceps. For cases with Pringle maneuver, the cotton and bulldog method were applied. In the bulldog group, we routinely exploredthe abdominal cavity, dissociated the mucosal tissue around the hepatoduodenal ligament, exposed the hepatic portal as well as the right Glissionean pedicles. Bulldog was delivered into the abdominal cavity with the matched forceps through the 12-mm trocar to block hepatoduodenal ligament or the right Glissionean pedicles (Figure 2) to block the hepatic inflow. While, in the cotton clamping group, we need another 5-mm port trocar, which should be positioned in proper place to ensure the encircle of the hepatoduodenal ligament, A forceps went through the the hepatic pedicle and an 80-cm cotton tape was placed around it. Then, the ends of the cotton tape were pulled out through the 5-mm trocar port, and a tube was pushed inside the abdominal cavity close to the hepatic pedicle, and was fastened by pulling cotton tape through the tube [16](Figure 3). 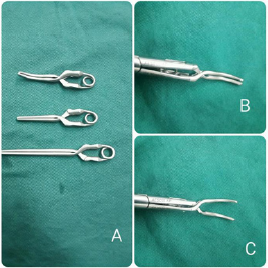 A. The different lengths of Bulldog, the longer was used to pringle manuever, the other were used to the right Glission pedicles, the unique curved design fits better with the baseline than ordinary straight clamp, further ensuring complete vascular occlusion.

B. The matched forceps,non-working status. 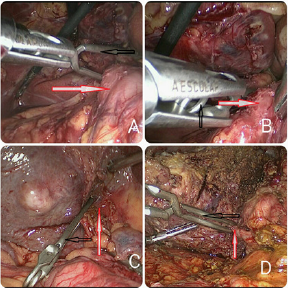 Figure 2: The Bulldog in intraoperative pictures. 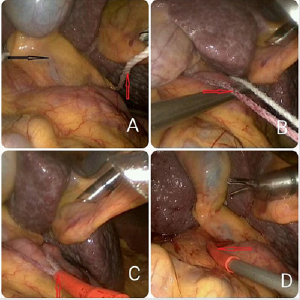 Figure 3: The cotton in intraoperative pictures.

All the patients underwent the operation by one team and received the same postoperative care. The postoperative complications were recorded and analyzed.The CRP and liver functionmarkers including ALT,AST,TBIL and ALB were checked at first , third and fifth day after liver resection as well as the postoperative duration.

Data were analyzed with SPSS 17.0 (IBM Corporation, NY, USA). Continuous variables weredescribed as mean± standard deviation(SD) and subjected to Student’s t test. The x2 test (with continuity corrected x2 if the expected count was<5) or the Fisher exact test was appropriate for categorical data. A p value of <0.05 was set as statistically significant.

Baseline clinical characteristics of patients are shown in Table 1. 110 patients underwent the laparoscopic liver resection with vascular occlusion, the patients with vascular occlusion in laparoscopic liver resection with a bulldog(n=54) and cotton tape (n=56) , included hepatic cancer combined liver cirrhosis , hepatic hemangioma and calculus of intrahepatic duct and so on. We blocked the right Glission pedicles in right hepatectomies patients, and the rest were blocked with Pringle maneuver. The patients in the two groups were matched age, gender, BMI, HBV, liver cirrhosis, side of resection and diagnoses in Table 1. All the patients were received similar preoperative assessments and postoperative management.

Introperative clinical outcomes are summarized in Table 2. The number of bulldog group blocked the hepatic vessels was 126 and the cotton group was 156. No statistical differences were observed in the type of liver resection, the duration operation time and blood loss , but the clamping time was significantly shorter in the bulldog group(36.2±5.6 vs.277.3±88.4 s, p<0.001). 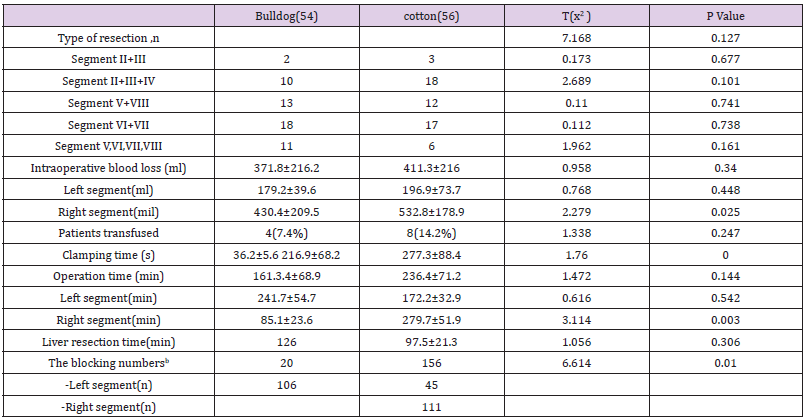 Note: SD: standard deviation. a: clamping time represent the overall time consuming by clamping the tourniquet which obtained from surgery video. b: the summary times of blocking. Segment V,VI,VII,VIII: including V,VI,VII,VIII and right hepatectomy. 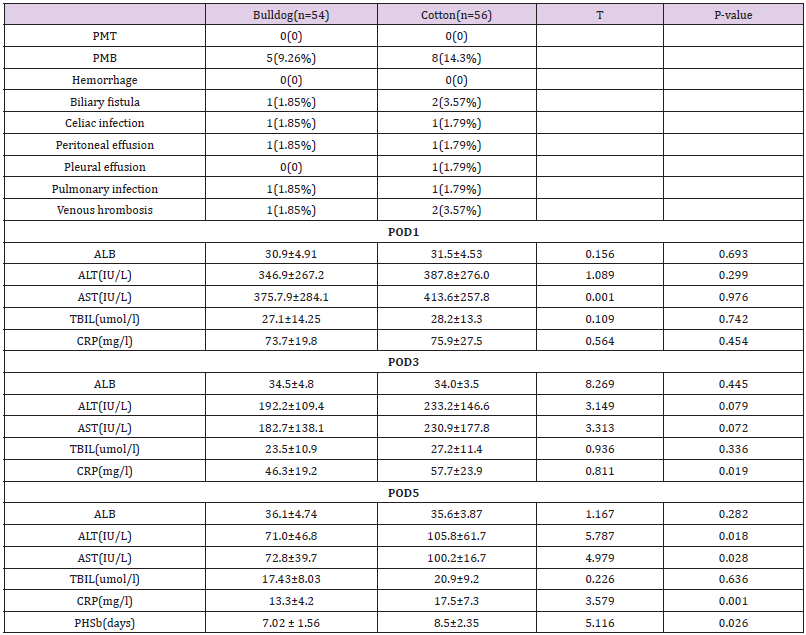 With the innovations of laparoscopic technique and specialized equipment, laparoscopic liver resection became the dominating resection surgery approach[17]. From Dec of 2014, laparoscopic hepatectomy was firstly carried out in our department, extracorporeal[16,18,19] Pringle maneuver has been applied in most laparoscopic liver resections which need to block the hepatic inflow, the cotton tape was frequently applied[20]. Also, there were many novel devices, Shin-ichiro[21] recommended the smooth and effective way of Biliary Scope for Pringle’s Maneuver in laparoscopic hepatectomy in 2007. Next year, Akihiro[22] investigated 32 consecutive patients with Endo Retract Maxi for Pringle maneuver during laparoscopic hepatectomy and Dua MM used umbilical tape[23] in 2015. We used to block the hepatic inflow by extracorporeal Pringle maneuver method with cotton tape5 for its validity , softness and safe for vessel protection, but it was always tricky for clamping in a two-dimensional view to encircle the hepatoduodenal ligament, and it delayed operation time for unexperienced surgeon. Bulldog has been widely used in urinary surgery[24,25] for vascular occlusion, In gynecology, Yang[26] Express the bulldog clamp is a well crossover clamp with serrated blades that effectively occlude vessels without slippage or significant crush injury, is the laparoscopic instrument for minimizing blood loss during the surgical procedure. But bulldog in hepatic surgery has rarely been mentioned, this is the first report to formally demonstrate the clinical application in hepatic surgery. in this study, we compared the cotton and the bulldog for vascular occlusion during laparoscopic hepatectomy , all the tourniquets were clamped successfully, in spite of the position of the patient or the presence of cirrhosis.

The intermittent Pringle maneuver blocking time was consistently 15min no matter which way and 5-min release periods. all the right Glissionean pedicles were clamped only once to assure that two clinical data were comparable. The comparison of clamping and declamping the tourniquet is indispensable. after all, we prefer to the laparoscopic instruments which are useful and easy to implement . Ischemic reperfusion injury and amount of blood loss play a significant role in liver function, which was reflected by the clamping time and blood loss. In subgroup of operation time, the results show us that the operation time of the right segment in bulldog group was shorter(p=0.003). There is no statistical difference occurred in left segments, which suggested that the Bulldog’s superiority stands out in right segments, especially located tumors involving segments 7, and 8[27]where procedures were considered the most difficult. When we compared to the clamping numbers, we found that the mean proportion of every procedure in left segments was 1.67 and 2.1, and which in the right segments were 2.52 and 3.17, which demonstrated that Ischemic reperfusion injury was worse in the traditional group(p=0.010).

Cotton with Extracorporeal Pringle maneuver needs another incision[29], and the tourniquet need to vary following the tumor location to encircle easily. Besides, it is difficult to clamp with laparoscopic instruments and easy to enwind. Most procedures required at least once blocking, so the cotton process in laparoscopic context were mess around for freshmen. The postoperative clinical outcomes also showed more complications occurred in traditional group. How about the Bulldog? First, it did not have any effect on operation field and easy to operate with low requirements of laparoscopic technique with less time and promoted the procedure. Second, small teeth covered the bulldog surface which can clamp the hepatoduodenal ligament or the right Glissionean pedicles toughly and no one creep down to guarantee the security. Third , took it out without any difficulties when you need to loosen it to avoid the overlong ischemia reperfusion injury, and reused it after disinfection. Fourth, its special material and easy to manipulate may reduce the risk of injury for vascular[30], bile duct and surrounding parenchyma which contributed to the earlier recovery of postoperative liver function. The last but not the least, They have less incidence of postoperative complications of 54 patients.

Bulldog for vascular occlusion is effective and time saving during laparoscopic liver resection with 54 patients than the traditional group, maybe the number is limited and more information are needed to witness its superiority, but we believe bulldog will be effectively performed approach for suitable patients undergoing laparoscopic liver resection with the advantages of simpleness, security and effectiveness.

Liang He and Weixiang Li are co-first authors, Xiaoping Geng and Hui Hou are co-corresponding authors. The authors would sincerely thank the reviewers and editors for critically reviewing and editing this manuscript. This manuscript is being submitted as an original article. This manuscript has not been presented on a society or meeting before.

The study was supported by grants from Anhui Medical University Science Foundation(2015hhjh05).

The authors declare that they have no conflicts of interest.

Aim: To compare the clinical effect of modified Pringle with traditional Pringle for vascular occlusion during laparoscopic hepatectomy.