Methods: This study aimed to test the hypothesis that EC aqueous extract was as potent as EG aqueous extract in lowering basal and postprandial plasma glucose levels of diabetic mice. The chemical profiles of the two extracts were also analyzed using ultra performance liquid chromatography.

Conclusion: In conclusion, EC was of similar potency as EG and can be considered as an alternative of EG in diabetes management.

Edgeworthia chrysantha Lindl. (EC) of family Thymelaeaceae is a shrub widely distributed in east Asia. It is cultivated in Japan for making traditional Japanese paper (Washi) from its bark fibers. In China, this plant is mainly found in Henan Province, Shanxi Province and some other provinces along the southern side of Chang Jiang (the Yangtze River). According to Flora Reipublicae Popularis Sinicae, the whole plant of E. chrysantha is commonly used to heal bone fracture or rheumatalgia [1] as it possesses anti-inflammatory and analgesic activities [2]. In western Hunan Province, people of Tujia ethnic group pick the EC flower buds, dry them and then soak them in hot water to make herbal tea for daily consumption to tranquilize the mind, remove obstruction and improve digestion [3].

A closely related species Edgeworthia gardneri (Wall.) Meisn. (EG) distributes in areas at high altitude in eastern Tibet and northwest Yunnan Province. Its dried flower buds, named “Lu luohua” in Chinese, are marketed as precious Tibetan floral tea which is renowned for its broad pharmacological activities in treating diabetes mellitus, cardiovascular diseases and hyperlipidemia. As reported by Geng and colleagues, the water extract of EG flowers could inhibit-D-glucosidase in vitro and significantly lower blood glucose level of alloxan-induced diabetic mice [4]. Recently, it was further elucidated that the water extract of EG flowers considerably decreased blood glucose level and ameliorated insulin resistance in diabetic mice through the regulation on gut bacterial phylotypes [5]. Owing to its promising anti-diabetic effect, EG has been used as the major component of a patented auxiliary blood sugardecreasing composite in China since 2014 [6].

Many compounds have been isolated from EC and EG flowers [7-10]. They can be mainly grouped as coumarins, flavonoids, flavone glycosides and triterpenes. Among these compounds, some isolated from EG have been proven to possess anti-diabetic effects. Edgeworin and daphnoretin were evaluated for their effects on two critical enzymes for carbohydrates digestion and metabolism. Edgeworin displayed strong inhibitory activity against α-glucosidase, while daphnoretin exhibited potent inhibitory effect against both α-glucosidase and α-amylase [11]. Another compound, tiliroside,was identified as the major constituent of EG flowers. It showed a significant α-glucosidase inhibitory activity and acted as a competitive inhibitor. Moreover, oral administration of tiliroside at 300 mg/kg could significantly reduce the fasting and postprandial blood glucose levels of streptozotocin (STZ)- induced diabetic mice [12]. Besides tiliroside, quercetin was also found to be a promising anti-diabetic agent. Quercetin induced insulin secretion in MIN-6 cell line in a glucose-dependent manner. Treatment of diabetic mice with quercetin resulted in remarkable decrease in blood glucose level, increase in insulin secretion and protection of pancreatic islets [13].

As shown in Figure 1, the appearance of flowers and dried flower buds of EC and EG are very similar in shape, color and size. Therefore, people of Tujia ethnic group very often collect EC flower buds as a substitute for EG and they believe that EC can help in managing diabetes mellitus as well. Although there are several scientific papers reporting the anti-diabetic effect of EG both in vitro and in vivo [4,5,14,15], the effect of EC on basal or postprandial plasma glucose level is still unknown and needs to be investigated. Hence, in the present study, the hypoglycemic and antihyperglycemic effects of water extract of EC flower buds, in parallel with that of EG, were evaluated and compared in diabetic mice for the first time. Moreover, the chemical profiles of the two extracts were analyzed and the contents of those active anti-diabetic compounds (edgeworin, daphnoretin, tiliroside and quercetin) were quantified for comparison. 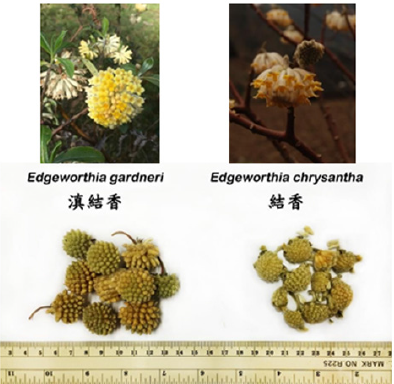 Dried flower buds of EC and EG were collected in Shaoyang of central Hunan and Tengchong of west Yunnan, respectively, and morphologically authenticated by Prof. C. L. Long. Herbarium voucher specimens were deposited at the museum of Institute of Chinese Medicine, The Chinese University of Hong Kong, with voucher specimen numbers assigned as 3483 for EC and 3494 for EG. Dried flower buds of EC or EG were extracted with distilled water under reflux twice. After lyophilization, the extraction yields for EC and EG were found to be 18.0 % and 20.1 %, respectively.

Diabetic (+db/+db) mice (5.5 - 7 weeks old, male) were supplied by Laboratory Animal Service Centre, The Chinese University of Hong Kong. They were housed under the conditions of 22-25°C and a 12-hour light-dark cycle. Standard animal chow and tap water were accessed ad libitum. Hypoglycemic effect and antihyperglycemic effect in Oral Glucose Tolerance Test (OGTT) of aqueous extracts of EC and EG on overnight-fasted diabetic mice were performed as previously reported with minor modifications [16]. Metformin (200 mg/kg) was used as a positive control.

The UPLC profiles of EC and EG aqueous extracts are shown in Figure 2. It was found that the active compounds edgeworin and quercetin were not present in the extracts. On the other hand, tiliroside and daphnoretin could be detected. Their amounts were quantified and listed in Table 1. Effects of 14-day treatment with EC or EG aqueous extract on body weights and basal plasma glucose levels of overnight-fasted diabetic mice are shown in Figure 3. It was found that the body weights of all groups of mice increased gradually during the course of experiment (Figure 3A). However, weight gain of mice in EG group was the least. On average, their weight increased by 7.7 % on Day 15 when compared with that on Day 1 whilst other groups, including water, EC and metformin groups, had around 17 % increase in body weight. As shown in Figure 3B, the mice of EC and EG groups had lower plasma glucose levels than the water (control) group on Day 8. However, the effect was not statistically significant and the trend of decrease disappeared on Day 15. It implied that EC or EG aqueous extract at 200 mg/kg did not exert hypoglycemic effect in our current experiment setting. 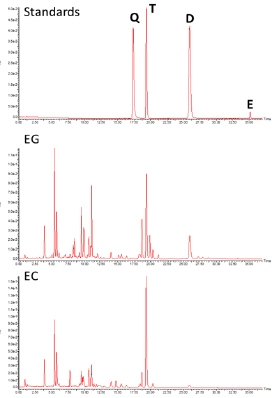 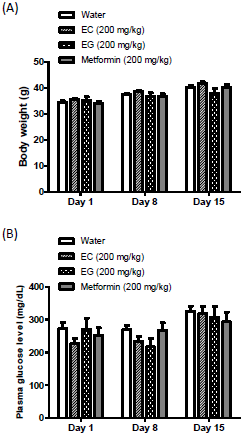 (A) Body weights and

(B) Basal plasma glucose levels of overnight-fasted diabetic mice during the course of 14-day treatment with EC or EG aqueous extract at 200 mg/kg.

Data are mean ± SEM (n = 6-13). No significant difference was observed among groups on the same experiment day.

Results of OGTT are shown in Figure 4. As the positive control, metformin could significantly lower plasma glucose levels of diabetic mice after glucose challenge when compared with that of water (control) group (p<0.05). After a single treatment of 200 mg/ kg of EC or EG aqueous extract, a trend of antihyperglycemic effect was observed. However, no statistical significance was detected (Figure 4). 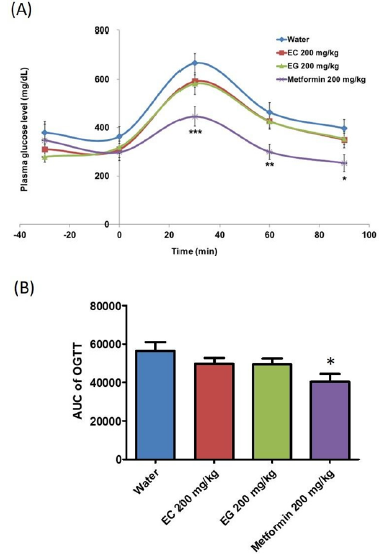 Figure 4: Effect of EC and EG aqueous extracts on Oral Glucose Tolerance Test (OGTT) in diabetic mice. (A) Plasma glucose levels of different groups at different time points. Plasma samples were taken before drug treatment (-30 min), before glucose challenge (0 min), and various time points after glucose challenge (30 to 90 min). (B) Area under the curve (AUC) of each curve plotted in Figure 4(A). Data are mean ± SEM (n = 9-14). *p<0.05, **p<0.01 and ***p<0.001 when compared with water (control) group.

As a substitute of EG, flower buds of EC are always used by people of Tujia ethnic group for the management of diabetes mellitus. In the present study, the chemical composition and anti-diabetic effect of EC aqueous extract were investigated and compared with that of EG. In the hypoglycemic animal experiment, the weight gain of mice in EG group was the least (Figure 3A). Moreover, 4 out of 10 mice in EG group died before the end of experiment (data not shown). Taking these pieces of information together, the dosage of EG at 200 mg/ kg might be too high for diabetic (+db/+db) mice. However, Geng and colleagues reported that single intragastric administration of EG aqueous extract at 1000, 2500 and 5000 mg/kg did not cause any acute toxicity to normal mice [4]. The inconsistency between our findings and the reported ones might be due to the variations in animal strains, animal conditions and dosing intervention. On the other hand, continuous treatment with EC at 200 mg/kg for 14 days seemed to be safe to the animals.

It was reported that intragastric application of aqueous extract of EG at 1000, 2000 and 3000 mg/kg for 4 weeks could lower fasting blood glucose of high-fat diet- and STZ-induced diabetic mice [18]. However, the hypoglycemic effect of EG at lower dosage (200 mg/kg) for shorter treatment duration (14 days) could not be demonstrated in our study using genetically diabetic mice. Similar to EG, EC did not exhibit any promising effect in lowering basal blood glucose level either (Figure 3B).

According to traditional practice, floral tea is usually prepared by soaking flower buds in hot water. Under this extraction condition, edgeworin and quercetin are not available for consumption as reflected by the fact that they were not detected in EC or EG aqueous extract (Table 1). Even though they have been reported to possess anti-diabetic effects[11,13], edgeworin and quercetin were unlikely to contribute to the activity of EC or EG aqueous extract.

Tiliroside was identified as the major constituent of EG flowers [12]. As determined using UPLC, EC aquoues extract contained 1.311 % of tiliroside, which was double the amount in EG aqueous extract (0.660 %) (Table 1). It has been reported that tiliroside at a dose of 300 mg/kg could significantly reduce the fasting and postprandial blood glucose levels of STZ-induced diabetic mice [12]. However, tiliroside might not have contributed a lot to the antihyperglycemic effect of EC or EG (Figure 4) because its actual amount in 200 mg/kg of EC and EG aqueous extracts were only 2.6 mg/kg and 1.3 mg/kg, respectively, which were much lower than the reported active dose (300 mg/kg). Therefore, the in vivo antidiabetic effect of EC aqueous extract was not significantly different from that of EG aqueous extract, despite containing higher tiliroside content.

In conclusion, the results of the present study showed for the first time the mild antihyperglycemic effect of EC, supporting its traditional usage by ethnic people in China. At tested dosage (200 mg/kg, according to traditional human use in making tea), EC and EG exhibited similar potency. Although EG is more common and commercially available as products, our findings suggested that EC can also be considered as an alternative of EG in terms of diabetes management.

The authors would like to thank Mr. Ching-Po Lau of Institute of Chinese Medicine, The Chinese University of Hong Kong for his help in preparing the aqueous extracts.

The authors have no conflicts of interest to declare.

Methods: This study aimed to test the hypothesis that EC aqueous extract was as potent as EG aqueous extract in lowering basal and postprandial plasma glucose levels of diabetic mice. The chemical profiles of the two extracts were also analyzed using ultra performance liquid chromatography.

Conclusion: In conclusion, EC was of similar potency as EG and can be considered as an alternative of EG in diabetes management.