Tungsten trioxide (WO3) nanostructures have been synthesized with sodium tungstate dihydrate (Na2WO4-2H2O) additives Ceteareth-25 and alkyl hydroxyl ethyl dimethyl ammonium chloride (HY) surfactants using precipitation process. For the structural investigations of the samples, X-ray Diffraction Technique (XRD) and scanning electron microscopy (TEM). Optical features of samples were studied by UV-vis absorption and photoluminescence (PL).X–ray analysis shows that hexagonal WO3 nanoparticles are formed. The mean particle Size of samplesbetween10-17nm. The presence of cationic HY surfactant reduced the particle size of the samples. The absorption spectra of WO3/HY showed a blue shift, while the spectra of WO3/ Cet. showed a red shift. PL spectra of pure WO3, WO3/ Ceteareth-25 and WO3/HY nanoparticles showed ultraviolet emissions (369, 373 and 354nm) and red emissions (624nm).

In many fields of chemistry, physics and material science, metal oxides play a very important role [1-6]. The metal elements are capable to make a huge sort of oxide compounds [7]. These can receive countless basic geometry with an electronic structure, which will show metallic, semiconductor or insulator character. Oxides are used in the manufacture of microelectronic circuits, sensors, piezoelectrical devices, fuel cells, surface passivation coating against corrosion and in technological applications ascatalysts. Within the emerging field of nanotechnology, the objective is to create nanostructures or nanoarrays with unique properties that are appreciated by large or single particle species [8-12]. Because of dimension their small and high density of corner or edge surface sites, oxide nanoparticles can show specific physical and chemical properties. Tungsten oxide (WO3) may be well known n-type wide band gap semiconductor, inexpensive, environmentally friendly and chemically stable [13-15] among the prevailing metal- oxide semiconductors. Tungsten oxide has been investigated for photo catalysts thanks to their fantastic electrochromic, gaschromic and optochromic properties [16]. Its other unique properties have additionally been explored in flat panel displays [17], optoelectronics [18], energy devices [19] and gas sensors [20].

In recent years, due to photochromic effect, WO3 based materials have been utilized in clinical and natural examination as antibacterial coatings, biosensors, the ranostic materials, and materials for proliferation control [21]. Various methods are made to organize WO3 nano-particles like template assisted growth [22], anodization [23], conventional thermal evaporation [24], hot wall chemical vapor deposition [25], arc discharge [26], pulsed laser deposition [27], hydrothermal method [28] and solvothermal method [29]. Previous studies are conducted to synthesize WO3 nanoparticles. Priya et al. prepared WO3 by using precipitation method within the presence of surfactants CTAB and PEG- 600 [30]. Hariharan et al. synthesized WO3 nanoparticles using EDTA as a surfactant by simple household microwave irradiation technique [31]. However, in another study, WO3 nanoparticles were synthesized by facile solution procedure using different cationic surfactants [32]. Abdul Razaket et al. synthesized WO3 nanoparticles with CTAB surfactant assisting the hydrothermal method [33]. Zhang et al. have correctly developed monoclinic WO3 nanoplates via a topochemical conversion manner through onestep template-free hydrothermal route. The results showed that WO3 nanoplates are approximately 100–170 nm long and 30–50nm thick [34]. Another researcher developed WO3 square nanoplates using natural acids specifically L (+)-tartaric acid and acid as assistant agents [35]. Hexagonal WO3 phase used to be determined in the presence of hydroxy acid with particle size ~200nm and thickness ~100nm, whereas orthorhombic phase was once came about in the presence of acid with average particle length ~500nm and thickness ~100nm, respectively. The SAED pattern suggests that the pure WO3 square nanoplates are single crystalline. The precipitation technique among these methods is reasonable, easy and yields small particle size, excessive homogeneity, and stoichiometry that could not be performed at high temperatures. Ahmad Umar et al. used different cationic surfactants with various chain lengths eg., Cetylpyridinium Chloride (CPyC), Cetylpyridinium Bromide (CPyB), Hexadecyltrimethyl Ammonium Bromide (HTAC) and Tetradecyl trimethyl Ammonium Bromide (TTAB) were utilized.

These serve as double need: initially, functionalization of the nanoparticles beside controling the stoichiometry, subsequently preventing the agglomeration in the nanoparticles [36]. The use of different types of surfactants offers the potential to accumulate control over the WO3 nanoparticle measurement, morphology and size distribution, which is essential for customizing optical, electrical, chemical, and magnetic properties of nanoparticles for special applications [37-38]. To our knowledge, however, tungsten oxide nanoparticles are synthesized using a chemical method of co-precipitation within the presence of nonionic Ceteareth-25 (polyoxyethylene ether of higher saturated fatty alcohols) and cationic HY surfactants and their optical properties were presented for the first time during this study.

The X-ray diffraction pattern (XRD) of the dried as prepared and labeled samples was obtained using a PANalytical X0 pert (PANalytical) X-ray diffractometer with a wavelength of Cu Ka 154nm below 40kV and 200mA. The morphological studies of prepared nanoparticles were studied by Scanning Electron Microscopy (SEM) with a Philips X130 ESEMFEG.

WO3 nanoparticles were synthesized by dissolving sodium tungstate dihydrate (Na2WO4 · 2H2O) in 20ml deionized water solution. The solution was diluted separately with oxalic acid (1M), (1g) and hydrochloric acid 1M (HCL), diluted with deionized water, and stirred in a precursor solution. The final product solution is heated to 60oC for 1 hour to ensure complete reaction. White and green yellow precipitate was obtained in the presence of surfactant, then washed several times with de-ionized water and ethanol. Finally, the precipitate powder was collected and dried in an oven at 600oC for 6 hours. Samples were placed in a muffle furnace at 4000C for 1 hour to ensure the crystallization of WO3, WO3/ HY and WO3/ Ceteareth-25 nanoparticles. 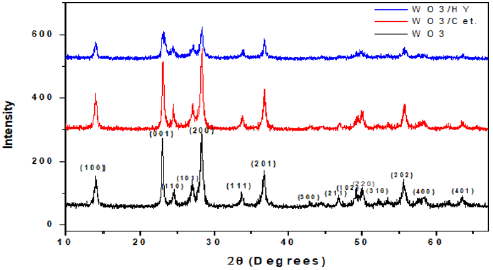 Figure 1: XRD pattern of the pure WO3, WO3/ Ceteareth-25 and WO3/HY nanoparticles.

where D is the particle size, k a fixed number of 0.9, λ the X-ray wavelength, θ the Bragg’s angle in radians, and B the full width at half maximum of the peak in radians.It should be noted here that the Full Width At Half Maximum (FWHM) of the diffraction peaks changes with various additives of surfactants. Furthermore, the crystalline size can be estimated to be 15, 17 and 10nm, for pure WO3, WO3/ Ceteareth-25 and WO3/HY nanoparticles respectively. On the other hand, in case of HY, the WO3 nanoparticles show smaller crystalline size of 10nm. SEM analyzed the morphology of the WO3 samples. (Figure 2a & 2b) shows some SEM micrographs of WO3 and WO3/ Ceteareth-25, and WO3/HY nanoparticles. Figure 2 shows the surface morphologies of all samples, which have agglomerated irregular particle structure. Obviously, the WO3 nanoparticles have grainy shapes and tend to form aggregations. The optical measurement of the prepared sample was performed at room temperature by using UV–visible absorbance spectrophotometer. The recorded absorbance spectra of WO3, WO3/ Ceteareth-25, WO3/ HY nanoparticles are shown in (Figure 3). The absorption peak corresponding to WO3, WO3/ Ceteareth-25, WO3/HY nanoparticles samples are obtained at 303, 306 and 300 nm, respectively (Figure 3). Absorption is generallydependent on several parameters, such as band gap differences and Impurity centers [39]. The optical band gap samples can be calculated using the Tauc equation that shows a relationship between the photon energy incident of semiconductors and the absorption coefficient [40]: 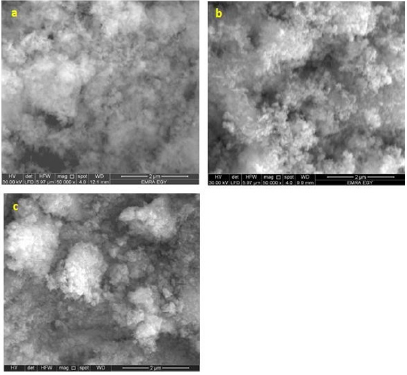 Figure 2: SEM micrographs of WO3 and WO3/Ceteareth-25, and WO3/HY nanoparticles. 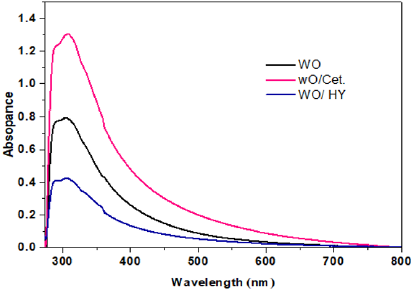 Figure 3: UV-vis spectra of WO3 and WO3/ Ceteareth-25, and WO3/HY nanoparticles.

Where B is the constant and Eg is the band gap energy of the material. The energy band gap (Eg) of sample can be found by plotting (αhν)2 versus hν and extrapolating the linear portion of the absorption edge as shown in Figure 4 Band gaps 3.19, 3.23, and 3.26 eV were obtained for these samples, respectively. These values offer an good agreement with the reported value [38]. A significant blue shift in excitonic absorption compared to that of the WO3 nanoparticles for nanoparticles prepared in the presence of surfactant HY. The prepared nanoparticles in aqueous solution of various cationic surfactants have different dimensional parameters, and this is quite evident from their spectrum, which demonstrates thesize dependence of the absorption spectrum arising from the quantum confinement of photo-generated electron-hole pairs [32]. PLspectro- scopy is a useful study to measure the energy distribution of photons emitted after optical excitati on and to understand the pair of electron hole in semiconductor oxide materials [41]. The spectra of photoluminescence can be used to analyze WO3 samples, oxygen vacancy and lattice distortion as shown in the (Figure 5). The spectra were recorded under the excitation wavelength of 300nm at room temperature. Both pure WO3, WO3 / Ceteareth-25 and WO3/HY nanoparticles show ultraviolet emissions (369, 373 and 354nm) and redemissions (624nm). 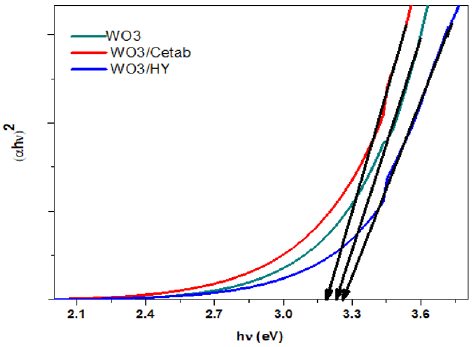 Figure 4: Optical band gap spectra of WO3 and WO3/ Ceteareth-25, and WO3/HY nanoparticles. 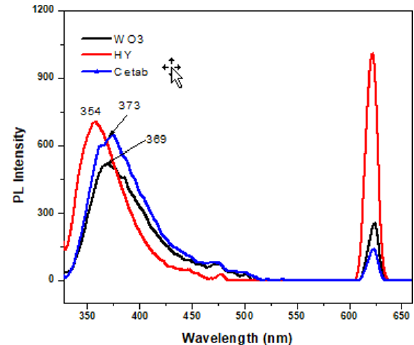 The ultraviolet band matches the excitonic near band gap emission. The red emission peak (624nm) is associated with oxygen vacancies and these emissions can be linked to various luminescent centers, such as oxygen gaps and energy levels caused by bond hanging in nanocrystals. The PL peak position in the WO3/ HY nanoparticles has a blue shift to lower wavelength relative to the pure WO3 nanoparticles. The PL spectrum obtained supported our spectrum of UV absorption and showed a similar change in peak position. In comparison to pure WO3 nanoparticles, the PL intensity of WO3/HY nanoparticles is clearly enhanced in the visible region. Typically, different surfactant materials are used to regulate particle size as well as passivate active surface sites in the precipitation process. The quantity and composition of the surfactant determines not only the size of these materials, but also the luminescent properties. These organic additives on the nanoparticles surface reduce the number of irradiative surfaces trapping sites, resulting in an increase in PL property [42].

On behalf of all authors, the corresponding author states that there is no funding for this paper

Tungsten trioxide (WO3) nanostructures have been synthesized with sodium tungstate dihydrate (Na2WO4-2H2O) additives Ceteareth-25 and alkyl hydroxyl ethyl dimethyl ammonium chloride (HY) surfactants using precipitation process. For the structural investigations of the samples, X-ray Diffraction Technique (XRD) and scanning electron microscopy (TEM). Optical features of samples were studied by UV-vis absorption and photoluminescence (PL).X–ray analysis shows that hexagonal WO3 nanoparticles are formed. The mean particle Size of samplesbetween10-17nm. The presence of cationic HY surfactant reduced the particle size of the samples. The absorption spectra of WO3/HY showed a blue shift, while the spectra of WO3/ Cet. showed a red shift. PL spectra of pure WO3, WO3/ Ceteareth-25 and WO3/HY nanoparticles showed ultraviolet emissions (369, 373 and 354nm) and red emissions (624nm).