Changes of Arterial Pulse (Augmentation Index) in Normotensive Subjects with Family History of Hypertension: Implication in Primary Prevention of Hypertension

2Department of Medicines and Therapeutics, The Chinese University of Hong Kong

Conclusion: AI is significantly higher in normotensive subjects with family history than those without family history. Measurement of AI may be promoted as indicator of potential risk of hypertension, with implication in primary prevention.

5117 Chinese volunteers in the community were enrolled in a hypertension survey. 143 ‘healthy’ subjects with family history of hypertension (either parent has BP >140/90mmHg, or has been prescribed anti-hypertensive treatment) were recruited into the study group, and 143 age and sex-matched ‘healthy’ subjects without family history, were assigned as the control group. All the subjects were screened for cardiovascular history and physical findings; those with valvular heart disease or chronically treated cardiovascular diseases including hypertension (SBP>140mmHg, DBP>90mmHg) were excluded. Blood pressure was measured by conventional cuff sphygmomanometry. The radial arterial pressure waves by applanation tonometry were recorded by the Sphygmocardiography using a Millar pencil strain gauge transducer (Sphygmocor System, PWV Medical Pty. Australia) after 5 min. resting and at least 2 hour’s post-prandial (Figure 1). Radial artery-derived aortic Augmentation Index (AI), as the ratio of systolic augmented wave over pulse pressure of unaugmented wave x100, were derived and recorded as described previously (Figure 2) [6,7]. The intraobserver variability was 4.5-5.5% and interobserver variability was 11.2-11.6%, as reported by Kelly and London et al. [8,9] Our local intraobserver variability was 5.5% and interobserver variability 7.3%. 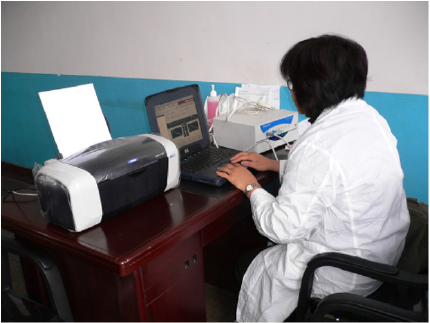 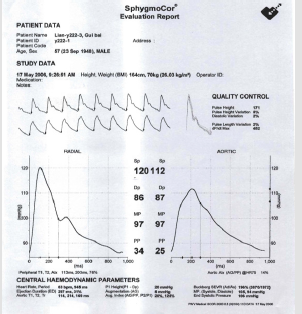 Table 1: Comparison of Demographic Parameters in Groups with and Without Hypertensive Family History. 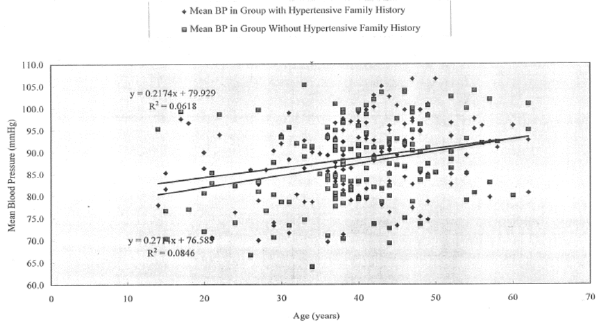 Figure 3: Mean Blood Pressure and Age in Groups with and without of Family History Hypertension. 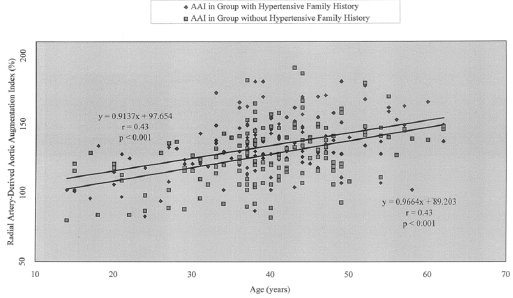 Figure 4: Radial Artery-derived Aortic Augmentation Index and Age in Groups with and Without Hypertensive Family History.

Overall control of blood pressure is achieved by a quantitative trait, controlled by numerous hormonals, neural, and other basic mechanisms. A single specific disturbance of these homeostatic mechanisms may not induce hypertension, but the existence of multiple primary defects affecting simultaneously several adaptive mechanisms may lead to hypertension. Genetic influence does not determine only the high or low blood pressure, but the entire range of values [10]. Pickering demonstrated that the first-degree relatives of persons with essential hypertension have higher blood pressures at all ages than the first-degree relatives of those without family history [11]. In a population of 1,989 male industrial workers among 40 and 55 years of age, Ostfeld and Paul showed a continuous distribution of blood pressure, consistent with a polygenetic, but not a single-gene mode of inheritance [12]. Feinleib et al. found monozygotic twins had higher correlation of systolic and diastolic pressure than dizygotic twins [13]. As an instrument of applanation tonometry, Sphygmocardiography is easy to use, minimally timeconsuming and highly reproducible. This noninvasive recording of pulse wave form can be used on large number of subjects and repeatedly on the same subjects.

Previous studies have documented its applicability in evaluating favourable effects on left ventricular afterload by nitroglycerin [14], arterial hemodynamic and ventricular-vascular interaction in hypertension [15,16], and wave reflection in systemic circulation [17]. Similarly the effect of aging on changing arterial compliance and left ventricular load [18-20], benefit of arterial dilation and reduced wave reflection [7], and the impact of arterial stiffening on systolic blood pressure and logical anti-hypertension treatment have been demonstrated with utilization of applanation tonometry technique [21-24]. In the present study, aortic AI as indicator of arterial stiffening is higher in the subjects with the hypertensive family history compared to subjects without the hypertensive family history after the third decade. This finding reiterates that genetic factors have an effect on the development of hypertension. Follow up these normotensive subjects whose AI is higher than the 95-confidence interval of their age group, may be helpful to assess the predictive value of aortic AI, in early development of hypertension, with implication in hypertension prevention. Early lifestyles modification and anti-hypertension treatment can be started, and hopefully hypertensive disease may be prevented.

Limitations of study include relatively small sample size which has inadequate power to assess the impact of other risk factors, such as smoking, alcohol and tea drinking on AI, apart from family history. The samples were randomly collected from a large community population, making the numbers of age groups not exactly identical for comparison.

Changes of Arterial Pulse (Augmentation Index) in Normotensive Subjects with Family History of Hypertension: Implication in Primary Prevention of Hypertension

2Department of Medicines and Therapeutics, The Chinese University of Hong Kong

Conclusion: AI is significantly higher in normotensive subjects with family history than those without family history. Measurement of AI may be promoted as indicator of potential risk of hypertension, with implication in primary prevention.