Obesity is a risk factor for endometrial cancer. Recently, visceral fat has been found to be strongly associated with obesity-related carcinogenesis, more than subcutaneous fat. In this study, we hypothesized that the visceral fat measured by computed tomography (CT) contributes to the occurrence of endometrial cancer. A retrospective chart review of patients undergoing primary surgery for endometrial cancer was conducted. The volume of visceral fat was measured by CT scans performed at the fourth lumbar level for all participants. To compare body fat distributions assessed by a direct method in 52 endometrial cancer cases with age- and BMI-matched healthy community controls. Case group showed significantly higher mean visceral fat area (VFA; 76.2 ± 25.0 vs. 62.2 ± 13.9 cm2, p = 0.007). The mean total fat area (TFA; 270.3 ± 99.9 vs. 238.9 ± 53.8 cm2, p = 0.137) and subcutaneous fat area (SFA;194.2 ± 86.5 vs. 176.7 ± 45.8 cm2, p = 0.315), however, presents no significant differences. VFA and BMI correlation (r2 = 0.299, p<0.001) was lower than to SFA (r2 = 0.528, p <0.001) and TFA (r2 = 0.584, p<0.001). In receiver operator characteristic (ROC) curve, at the value of 70.8 cm2, sensitivity and specificity of the case group was 55.8% and 75%, respectively. The study suggests that increased visceral fat is associated with endometrial cancer. Furthermore, VFA acts as the most independent factor to BMI, it may provide additional information to the representative risks of endometrial cancer.

The World Health Organization defines overweight and obesity as abnormal or excessive fat accumulation that may lead to health impairments. Obesity is a serious and on the rise health problem and it has more than doubled worldwide since 1980. Obesity has been associated with metabolic syndrome, diabetes, cardiovascular diseases (heart disease, stroke, and hypertension), other chronic diseases and psychological problems; obesity is the second most common cause of death that can be prevented [1].Recent studies have shown that obesity is correlated to increased risks of several cancer types, including esophagus, thyroid, postmenopausal breast, pancreas, gall bladder, colon, rectum, endometrium, kidney, and hematological malignancy [2, 3]. In the Occident, endometrial cancer is the most common gynecologic malignancy and the incidence of endometrial cancer has increased since the mid-2000s [4]. In recent years, the number of patients with endometrial cancer has increased due to an increase in the obesity population in South Korea [5]. Several large cohort studies have shown that endometrial cancer is one of the earliest known obesity-related cancers. One large epidemiologic study reported that every 10 unit increase in body mass index (BMI) increases the relative risk of endometrial cancer by 2.89 times [6].

Histologically, endometrial cancer can be classified into two types. Type 1 makes up the majority of endometrial cancer and is mainly associated with the endocrine system, including nutritional factors and obesity. In type 1 endometrial cancer, the mechanism that incites tumors through the hormonal change related to obesity is referred to as ‘unopposed estrogen hypotheses. Among women with chronic anovulation in the premenopausal period, progesterone insufficiency means that there is no function to counteract the estrogen. In postmenopausal women, it is hypothesized that excess weight leads to the aromatization of estrogen in the adipose tissue which in turn causes the exposure to highly concentrated estrogen. Potischman, et al. reported that high levels of androstenedione and testosterone increase the risks of endometrial cancer, and the rise of estrone and estradiol levels also contributes to its risk [7].

When visceral adipose tissue is excessive, adipokines, including leptin and interleukin, are secreted, causing chronic inflammation and insulin resistance. Recent studies have found excessive visceral adipose tissue plays an important role in carcinogenesis [8]. However, while most studies analyzing the relationship between obesity and endometrial cancer have used BMI as a parameter of obesity, few studies have focused on the role of visceral fat. In decades of obesity research, BMI has been an important indicator because of its accessibility and familiarity. Nevertheless, BMI alone is not enough to support the recent notion that obesity means excessive accumulation and metabolism of fat tissue. Therefore, this retrospective study was performed to predict the effect of subcutaneous and visceral fat on endometrial cancer using computed tomography (CT) scan measurements.

We searched our medical records database to identify all endometrial cancer patients. From 2010 to 2014, a total of 124 patients were diagnosed with endometrial cancer with biopsy and a total of 52 final case groups were selected. Figure 1 shows the flow chart of the patient enrollment process throughout the study. Patient data, including age, BMI, histological subtype, was collected from a retrospective database. The control group included 854 patients who did not have evidence of endometrial cancer with CT scan, at the same institution’s health promotion center for the same period. To balance case and control groups, the propensity score (PS) method was performed by using Matching packages (R version 3.1.2) [9]. PSs were calculated using a logistic regression model and the following covariates: age and BMI. Using PSs, control subject was individually matched to endometrial cancer patients and a total of 104 subjects generated with 52 for control group and case group respectively (Figure 2-4). 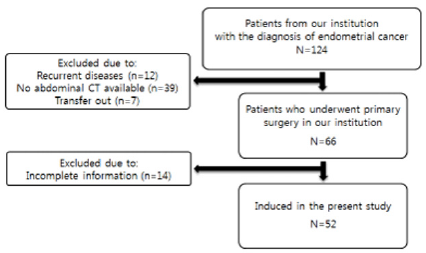 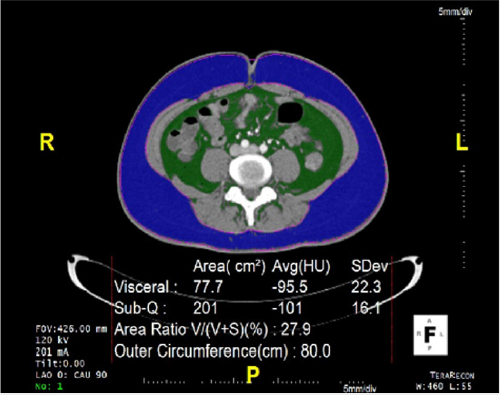 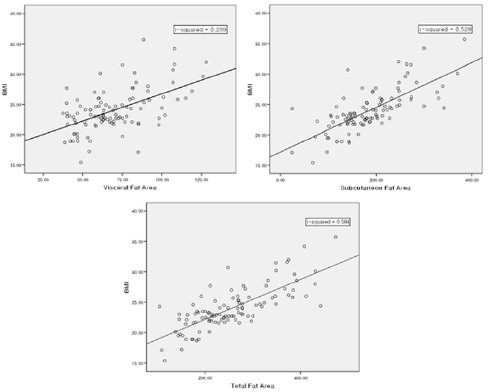 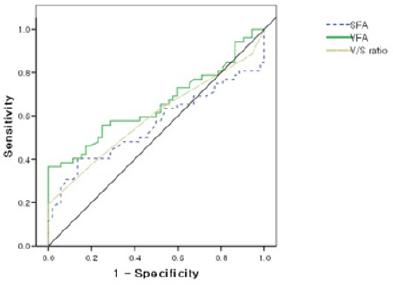 The volume of subcutaneous adipose tissue and visceral adipose tissue was quantified by computed tomography scans (Sensation 64, Siemens Medical Solutions, Forchheim, Germany) with a 16 mm × 0.75 mm collimation, a 420 ms rotation time, and a tube voltage at 120 kV. All CT scans were performed in a supine position. Ten slices (1cm thick) of the abdomen between the fourth and fifth lumbar vertebrae (L4 - L5) were obtained from each patient. Two contours, the body perimeter, and the inner margin of the abdominal muscles, were identified using a dedicated workstation (Aquarius 3D Workstation, Tera Recon, San Mateo, CA).

Quantitative variables were compared using the Mann- Whitney test, but the results are presented as mean ± SD. Spearman Correlation Analysis was used to identify the relationship between BMI and 3 other variables (visceral fat area, subcutaneous fat area, and total fat area). To evaluate the accuracy of the 3 measures, Receiver Operating Characteristics (ROC) analysis was performed. The area under the curve (AUC) was computed and the Youden’s index is used to detect the optimal cutoff point. The p-values < 0.05 were considered to be statistically significant. All statistical analyses were performed using SPSS version 14.0 (SPSS Inc., Chicago, IL) and R (version 3.1.2).

Of the 124 patients who were pathologically diagnosed with endometrial cancer, 66 patients underwent primary surgery. Of these 124 patients, 12 patients treated with the recurrent disease diagnosed in other hospitals, 39 patients’ unavailable CT images and 7 patients transferred were excluded. We also ruled out 14 patients because of incomplete medical records. As a result, a total of 52 patients were enrolled to participate in this study. The characteristics of endometrial cancer and a matched group of healthy individuals. Because the groups were matched by age, and BMI, there were no significant differences between the groups. Though there is no significant difference in subcutaneous fat area (SFA) and total fat area (TFA), visceral fat area (VFA) is noticeably elevated in endometrial cancer cases.

There are several limitations to our study. The risk factors for endometrial cancer are age, diverse hormonal factors such as hormone replacement therapy after menopause, history of oral contraceptives or tamoxifen usage, obesity, family history of cancer, and diabetes. Nevertheless, our study lacks a risk factor assessment due to insufficient clinical data. This bias can tend to overestimate the impact of VFA in patients with endometrial cancer. One other limitation of this study was that our analysis of this cross- sectional data could not provide causal explanations. Further studies are needed to prospectively relate the accumulation of visceral fat to the presence of risk factors. Endometrial cancer patients had a significantly high VFA compared to the control group. On the other hand, there were no differences in SFA and TFA between the two groups As a result, this means that among people of the same height and weight, those with high levels of visceral fat increase the risk of endometrial cancer. These results are supported by recent studies that correlate metabolic active play of visceral fat in carcinogenesis [14]. Interestingly, our study found that TFA did not differ between endometrial cancer patients and controls. This may be due to the high absolute value of the SFA, which is primarily composed of TFAs. In the cancer group, SFA was 194.2 ± 86.5 cm2, VFA level was 76.2 ± 25.0 cm2. The strength of the present study is cohort research of well-matched controls for age and BMI. Using BMI- matched controls, we found that visceral fat is not a bystander but independent of BMI. VFA showed the best accurate risk correlation to endometrial cancer than BMI, SFA, and TFA through a correlational and multiple regression analysis. Therefore, although the same BMI patients with increased visceral fat can conclude the higher risk of endometrial cancer.

a) Premenopausal women produce estradiol (E2) in the ovary, but in menopaused women, androgen is produced in adipose tissue converted to estriol (E3) aromatization.

b) Although progesterone has an anti-cancer effect, postmenopausal women have reduced progesterone levels [18].

c) Early postmenopausal is associated with a preferential visceral fat increase regardless of age or total adiposity [19]. These three theories can support our hypothesis.

In this study, we found that VFA was superior to SFA and in V/S ratio in identifying endometrial cancer, as indicated by VFA’s larger AUC. Our study also showed that the cutoff points of 70.8 cm2 VFA were optimal in yielding maximal sensitivity and specificity in the prediction of endometrial cancer, using the ROC curve. In similar studies to this one, Hayashi and Miyawaki have set a VFA cut-off point of central obesity in the metabolic syndrome. In the Japanese American study, the VFA cutoff point was set at 75cm2 [20], and in the Japanese study, the cutoff point set at 65 cm2 [21].

This study shows that VFA can be an independent risk factor of endometrial cancer superior to BMI. These results demonstrate the limitations of determining obesity-related cancer risks only through BMI. Furthermore, this study shows the significant impact of visceral fat on the development of endometrial cancer. The study highlights the need for further research regarding the potential physiological and pathological pathways of visceral fat.

The authors declared no potential conflicts of interest with respect to the research, authorship, and publication of this article.