We report a case of a sudden sensorineural hearing loss (SNHL) occurred as a complication after laparoscopic sleeve gastrectomy (LSG) under general anaesthesia. Today, sleeve gastrectomy (SG), is one of the predominantly performed bariatric surgical procedures and laparoscopic techniques is the Gold standard [1-3]. This bariatric operation creates a sleeve-shaped stomach along the lesser curvature determining good results in reduction of excess weight through a double mechanism: a reduction in stomach’s volume and a reduction in the ghrelin’s secretion, an oxidizing hormone produced mainly in the gastric fundus cells’ level deleted with this surgical procedure [4].

A 25-year-old woman suffering from morbid obesity undergoes LSG under general anaesthesia. The past clinical history was not significant except for smoking and latex allergy. She had never experienced surgery and anaesthesia. She had never suffered from ontological diseases; she usually did not take any medication and had never taken any ototoxic drugs. At the admission, the physical examination and laboratory tests showed no significant alterations (Table 1). Anaesthesia was conducted with the balanced anaesthesia technique which defines a combination of agents and techniques to obtain premedication, general anaesthesia, muscle relaxation and analgesia [5] (Table 2). 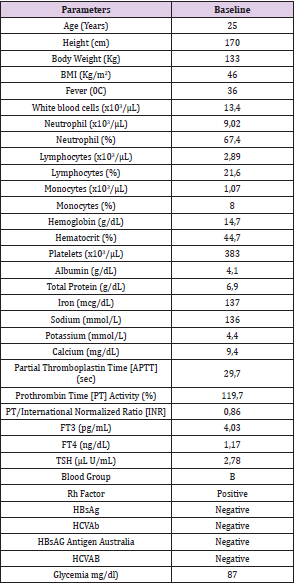 The sleeve gastrectomy was performed in laparoscopy [6]. In order to gain better access to the subdiaphragmatic region, the patient was placed, during surgery, in supine position in anti-Trendelenburg and with legs spread. As laparoscopic entry techniques we used a Verres-type needle (14g; 120 mm) along the lateral margin of the left rectus abdominal muscle at the height of McBurney’s point. We used a standard-pressure (12-14 mmHg) CO2 pneumoperitoneum. Five trocars were placed for access to the peritoneal cavity (2: 5 mm; 3 12 mm). An ultrasonic system (Harmonic scalpel) was used for haemostasis and tissue dissection. Gastric transecting and suture were performed with a mechanical stapling device (Ethicon’s Echelon Flex GST System). Resected stomach was extracted through a small laparotomy in the left side. The procedure lasted two hours and forty minutes; the surgical time was about two hours and ten minutes. There were no surgical complications and no excessive blood loss. During the procedure, there was no respiratory, cardiac, nephrological, etc. complications and the hemodynamic remained stable.

As analgesic purpose, intravenous injection was performed with ketorolac, tramadol, metoclopramide, ranitidine. Sixty minutes after the end of the procedure she accused an unpleasant hearing loss on the right ear and contextually the perception of the same ear with an annoying noise: a tinnitus, no vertigo. The patient was submitted to a visit by an otolaryngologist, biometric examination, brain and brainstem nuclear magnetic resonance (NMR), tympanogram and audiogram. Physical examination of the ear was negative: the tympanic membranes was intact and normal; brain and brainstem NMR were negative and so biometric examination; there was not suggestive elements of otitis neither bacterial nor viral. Tympanogram was negative (Figure 1); the audiogram showed normal results in the right ear, instead in the left ear a hearing loss occurred with tonal island at 125, 250, 500 MHz. The patient, according to the otorhinolaryngology’s indications, was treated with parenteral prednisol 40 mg/day for six days, then with oral prednisol 20/mg/day for other seven days. She was discarded after seven days. At the control audiometry performed after two months there was no improvement.

Figure 1: Tympanogram: on the right ear (blue line) and on the left one (red line) impedance testing was normal.

SNHL is defined as a hearing loss of at last 30 dB found in three sequential frequencies in the standard pure-tone audiogram over three days [7]. The Aetiology is idiopathic in 90 % of cases instead in 10 % of patients’ causes are heterogeneous, the common ones include accidents, cranioencephalic traumas, infections and metabolic diseases. SNHL is reported as perioperative complication. SNHL after surgical procedures in spinal anaesthesia or lumbar puncture has been reported frequently as well as complication after otologic surgery and cardiopulmonary bypass [8-10]. However, in literature there are only few cases occurred after non otologic and non-cardiopulmonary surgical procedures carried under general anaesthesia; among these, as we found, only three procedures have been associated to laparoscopic surgery conducted under general anaesthesia, no one after bariatric surgery [11-15]. The case described is the first one reported occurred in association with a bariatric procedure. SNHL for non-cardiopulmonary surgery in general anaesthesia seems to be rare (Figure 2). 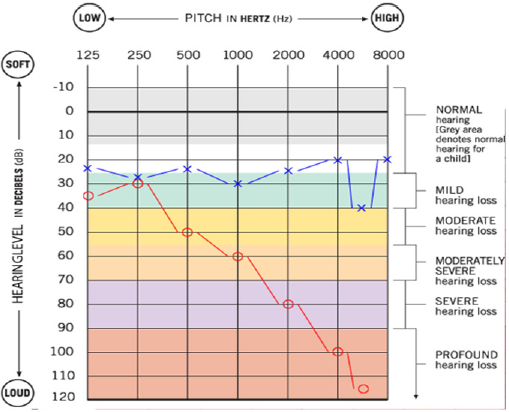 Figure 2: Audiogram at the onset of symptoms: on the left ear (X - blue line) is normal, on the right one (0 - red line) there is hearing loss with a tonal island (a region of the tonal continuum within which auditory sensitivity is normal) at 125, 250, 500 MHz.

A metanalysis of Warltier et al. reported 35 cases of SNHL after surgery under general anaesthesia, instead we found only three cases of SNHL after laparoscopy surgery: an appendicectomy, a cholecystectomy and a cystectomy. Generally, no patient has a preoperative hearing assessment [16]. Aetiology of hearing loss associated with non-otologic surgery and non-cardiopulmonary surgery carried in general anaesthesia is not clear, however there are some pathogenetic mechanism that seems to be involved: changes in middle ear pressure (mechanic and pharmacology), vascular pathology, Cerebrospinal Fluid (CSF) pressure changes, embolism, ototoxic drugs, and other miscellaneous causes. Obesity seems to have no role on the Aetiology and prognosis of SNHL [17]. Mechanic changes in middle ear pressure lead to damage of the tympanic membrane, of the round window, and of the conducting structures thus resulting in significant hearing loss [18-20]. This has been described as occurring during cardiopulmonary resuscitation. It appears that during mask ventilation, excessive pressure was transmitted to the Eustachian tube causing the middle ear damage. Pharmacologic chances in middle ear pressure are associated to the use of nitrogen dioxide (N2O) during anaesthesia. N2O is reported to be capable of causing variations of middle ear pressures that could lead to the tympanic perforation.

Decreased blood flow or thrombosis of the microcirculation during general anaesthesia either in the stria vascularis or the vessels of the spiral ligament, can result in ischemic damage of the hair cells and hearing loss. During laparoscopy surgery there is an increased intra-abdominal pressure due to carbon dioxide insufflation (CO2) that reduces the venous return to the heart, furthermore during laparoscopic sleeve gastrectomy (LSG) the anti-Trendelenburg position of the patient during operation can increase this condition. That may change arterial pressure and/ or CSF pressure and that can be direct and indirectly conducted to ear structure causing its lesion [20-23]. According to Linares at al. Speculations [13], during laparoscopic surgery pneumoperitoneum with CO2 (more anti-Trendelenburg position) the increasing in intrabdominal pressure, reducing venous return and determining hypotension and tendencies to thrombosis, could lead to changes on cardiac, renal and hepatic function of the patient, causing metabolic alteration as hypercapnia and acidosis, and rarely air embolism and cardiac irritability (Figure 3). 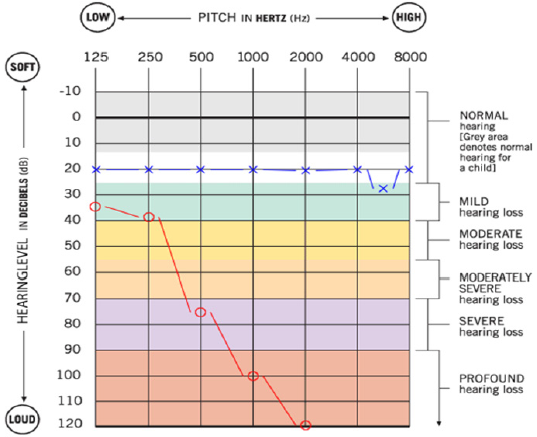 Figure 3: Audiogram at the onset of symptoms: on the left ear (X - blue line) is normal, on the right one (0 - red line) there is hearing loss with a tonal island (a region of the tonal continuum within which auditory sensitivity is normal) at 125, 250, 500 MHz.

Those factors could be responsible of a blood redistribution with deviation of blood from internal ear, an anatomic structure highly susceptible to relative ischemia due to the absence of collateral circulation and to the high energy metabolism. Epithelial damage on internal ear microcirculation causes reduction of the potential of cochlear work [24-26]. Evaluating this mechanism, the idea of damages produced on internal ear microcirculation during general anaesthesia, lead to lack of oxygen of the ciliated cells and hearing loss. Some authors [15] disagree with this etiological hypothesis because the widespread of laparoscopy should be associated with a greater number of these cases but these authors do not consider the possibility of minor clinical presentations that are may be overlooked. Treatment of SNHL is based above all on use of high dosage steroids, vasodilators and antihistamine, they seem able to give the best results. Some authors suggest the use of Hyperbaric oxygen therapy (HBOT) that improving oxygen supply to the inner ear could lead to improving hearing, but there are no prospective trials that prove the real effectiveness of it [27-31].

We believe that SNHL through various etiopathological and physio pathological mechanisms, that need to be well investigated, can be considered a possible and misunderstood complication following laparoscopic treatment of obesity carried in general anaesthesia, even if extremely rare. Probably more prospective trials are needed as well as a systematic pre-operative and postoperative assessment of the patient’s hearing abilities to make a correct and early diagnosis and to establish prevention strategies and effective therapies.