Mammary tumors are the most common type of tumors in intact female dogs. Twelve years old female exotic breed dog was presented with a history of large-sized and hard swelling around the chest on left parts of the first mammary gland. Upon clinical examination, the case was tentatively diagnosed as a mammary gland tumor and a sample from the tumor mass was taken by excision for histopathological examination and confirmation. After proper restraining, aseptic procedure, and anesthetic protocol, the tumor mass surgically excised. Finally, the dog was successfully recovered and there was no report of recurrence during the follow-up. Surgical correction of mammary tumors in a female dog was described in this case report.

A) A large-sized with hard mammary tumor mass on ventral thoracic area in dog.
B) Presentation of the tumor mass on thoracic pair of mammary glands after sedation.

A twelve years old bitch weighing 12kg was brought to the Mekelle University Veterinary Teaching Hospital with a history of swelling on the right anterior mammary glands on the lower part of the abdomen and the condition starts before 3 months. Moreover, the size of the swelling had grown progressively starting in the form of lumps with a lack of pain, limping, and licking of the site. Upon clinical presentations, a large-sized with hard mass swelling on her ventral thoracic area in between the left and right part of the first anterior the mammary glands (Figure 1A).
After a detailed clinical examination and thorough palpation, the tumor mass was located subcutaneously, painless, hard consistency, well-circumscribed and was attached to structures beneath it (Figure 1B). The clinical parameters like heart rate, respiration rate, and temperature were within physiological limits. The cut surface appeared multilobulated, papillary like projections, and white to grey in color. A biopsy sample of tumor mass was taken for histopathological examination of the lesions and the samples were preserved in 10% neutral buffered formalin.

Preoperatively, the dog was withheld 12hrs from feed and 6 hours from water before coming to the clinic based on an appointment. The dog then was properly restrained and premedicated with chemical methods using Ana-Sed® (xylazine HCl, Heartland Vet Supply Ltd at dose rate of 1.1mg/kg, Intramuscularly). After proper sedation, the dog was positioned in lateral recumbency and the area around tumor mass was washed with water and soap thoroughly after deep sedation (Figure 2A). Then, the hair surrounding of the swelling was aseptically prepared by clipping, shaving, scrubbing, washing with water, and salvon® (Cetrimide 3% and Chlorhexidine gluconate 0.5% solution).

The dog was kept on fluid therapy soon after induction (5% Dextrose solution plus 0.9% NaCl, 1000ml stat, I.V., Addis pharmaceutical, Adigrat Ethiopia, at a surgical rate of 10 ml/kg/hr. and calculated rate 1 drop/sec) to maintain the acid base balance and minimize the risk of complication. Moreover, the dog was kept on antibiotic penicillin (24mg/kg) and dihydrostreptomycin sulphate (30mg/kg) (PenStrep® Norbrook UK) I.M three hours preoperatively.
After proper premedication with Xylazine, the dog was induced by the cocktail of Xylazine (at dose rate of 1.1mg/kg) and Ketamine (Ketamine Hydrochloride, Germany) at 5mg/kg I.M and maintained also by Ketamine and finally, the dogs were restrained in dorsolateral recumbency on a patient table where all legs were loosely secured for ease of surgical procedure. Finally, the surgical area was scrubbed three times with a povidone-iodine 1% solution to decrease the microbial load in the area and left dried till ready for excision of the tumor (Figure 1A).

The mammary gland tumors in this case report was located on the caudal thoracic pairs of mammary glands. The gross characteristics of this tumor was well-circumscribed masses, diffuse swellings well attached to the body mass, and skin-covered to ulcerate in ventral side. Besides, the mass has had necrotic material with firm and irregular shape (Figure 2A).
Freshly collected canine mammary samples were sectioned transversely and examined grossly. Representative samples from gross lesions of testis were taken and fixed in 10% neutral buffered formalin (NBF) for 48hrs. The samples were then trimmed and prepared in 1 × 1cm size and dehydrated in ascending concentrations of Ethyl alcohol, cleared in xylol followed by embedding in paraffin wax (melting point 55-580C). Paraffin blocks were prepared and serial sections from the middle part from each testis were taken at a thickness of 5μm using a rotatory microtome. These sections were stained with hematoxylin-eosin staining and were mounted on frosted-end glass slides using DPX mountant [19]. Finally, all the slides were microscopically examined under light microscope.
Histopathological examination of the biopsy of the tumors showed malignancy-free tissue, composed of higher nuclear to cytoplasm ratio, cellular pleomorphism, and prominent nucleoli (arrows in Figure 3) with increased numbers of mitotic figures (double nucleus and nuclear fragmentation). Finally, based on clinical and histopathogical findings, the case was diagnosed as a canine mammary tumor, and was decided to be undergone surgical excision of the mass (Unilateral mastectomy). 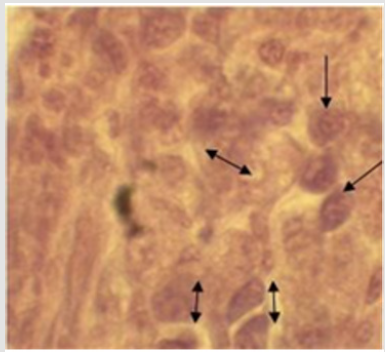 After aseptically preparing each surgical site and keeping the dog in the appropriate position on the patient table, an elliptical skin incision was given on the base of the swelling and advanced gently with blunt dissection by using Metzenbaum scissor. After careful handling and divulsion of adjacent tissues, the skin, all tumorous mass, mammary tissue, and fat down to the rectus fascia was surgically excised. However, the rectus fascia or its underlying muscle was not removed. During dissection, bleeding during the procedure was managed by ligation of the caudal superficial epigastric artery and vein. In addition, applying sterile gauze, using different straight and curved hemostatic forceps and topical infiltration of epinephrine was applied bleeding. Then, the removed area was well cleaned before closure for both cases.
Before skin closure, obliteration of dead space was made through continuous apposing sutures of skin with subcutaneous tissue to prevent accumulation of serosanguinous fluid using polyglycolic acid 910 (vicryl) size 2/0. Finally, the skin was closed with ford interlocking suture pattern using polyglycolic acid 910 (vicryl) no. 2 (Figure 2B). Lastly, the area was properly cleaned and dressed in a 1% povidone-iodine solution and the dog was admitted home after full anesthetic recovery.

Post-surgery, small skin bleeding was noticed but it is normal and helps to heal the wound unless continued for a long period. The owner was also advised to aseptically wash the surgical site at the second- and third-days post-operation. Besides, modified plastic collar was applied to avoid licking on the surgical site and Penicillin (24mg/kg) and dihydrostreptomycin sulphate (30mg/ kg) (PenStrep®Norbrook UK) I.M was administered for three consecutive three days. Meloxicam, at a dose rate of 0.5mg/kg, IM) was given twice daily for three successive days for pain management. Moreover, the owners were also advised to subjectively assess for discomfort, unpleasant discharges, pain, and inflammation at the surgical site. No signs of recurrence were present during this period. The postoperative evaluations showed good healing progress of the surgical wound and good general condition of the patients, as well.

Mammary neoplasms are the most common neoplasms in female dogs (Goldschmidt et al.,2011) comprising up to 25-30% of all neoplasms in dogs [21], and mixed tumors and carcinoma are diagnosed in 50-65% and 25-40% of cases of mammary tumors, respectively [9,21]. Moreover, the majority of the mammary gland tumors macroscopically showed a hard or an elastic consistency but some of them appeared fluctuant with edema or necrotic areas. Moreover, in the great majority of cases, the aspect of the tumor on the cut surface was white to grey and lobed [22]. This report was in agreement with this study.

Histologically, the mammary gland tumors showed malignancyfree tissue, composed of higher nuclear to cytoplasm ratio, cellular pleomorphism, and prominent nucleoli with increased numbers of mitotic figures. This general feature of tumors in this study agreed to the report by Goldschmidt et al. [17] who described similar histological characteristics including hypercellularity, hyperplasia, hyperchromasia, nuclear and cellular pleomorphism, high nuclear to cytoplasmic ratio and moderate to severe mitotic figures with prominent nucleoli in canine.
Unilateral mastectomy was performed that involves removal of all mammary tissue on one side of midline (Figure 2B). This includes lumpectomy (remove all skin), mammary tissue, and fat down to the rectus fascia without removing the rectus fascia. Moreover, there was no recurrence of tumor. The reason for non-recurrence in the present case might be due to its complete excision of the tumor mass as it was reported by different authors [6,8,23]. Canine mammary gland tumors are common tumors in dog that need an accurate diagnosis, complete surgical excision (mastectomy) of the tumor mass and proper follow-up of the case are essential to prevent recurrence and restore function.

Author has no disclosure to make that qualifies as a conflict of interest.

Mammary tumors are the most common type of tumors in intact female dogs. Twelve years old female exotic breed dog was presented with a history of large-sized and hard swelling around the chest on left parts of the first mammary gland. Upon clinical examination, the case was tentatively diagnosed as a mammary gland tumor and a sample from the tumor mass was taken by excision for histopathological examination and confirmation. After proper restraining, aseptic procedure, and anesthetic protocol, the tumor mass surgically excised. Finally, the dog was successfully recovered and there was no report of recurrence during the follow-up. Surgical correction of mammary tumors in a female dog was described in this case report.