This 17-year-old male patient encountered three episodes of partial seizures over a period of one month with upward gaze, tonic posture over left side and saliva drooling. He was admitted to our institute for evaluation. Physical examination did not reveal neurological deficit, neurocutaneous markers or other physical abnormality. He and his family members denied a history of neurofibromatosis. Brain CT showed a large lobulated mass in the right frontal lobe with intra-tumoral calcification causing right-toleft shift of midline structure (Figure 1). T2-weighted MRI showed a 13 x 10 x 10 cm tumour with septate cystic part surrounding the main tumour with significant perifocal edema, the solid component enhanced heterogeneously with gadolinium which invaded into the corpus callo-sum at the genu of body (Figure 2) The patient received right frontal craniotomy and total excision of tumour with iCT navigation and CUSA aid. The skull bone overlying the tumour was noted to be very thin during craniotomy (Figure 3). Cysts with multiple septa filled with xantho chromic fluid and gel-like material was noted at the periphery of the tumour. After removal of the cystic part of the tumour, the tumour plane was well identified. The solid portion of the tumour was soft in consistency, white in colour, and had moderate vascularity and scattered calcifications. Follow up MRI at 4 years post-surgery showed no recurrence or residual tumour (Figure 3). Histopathological examination of the resected material disclosed the tumour cells that are s-100 protein (+), neurofilament (+), vimentin (-), EMA (-), GFAP (Equivocal), and MIB-1 (Trace) (Figure 4). Microscopically the tumour displayed areas of antoni A and antoni B, therefore, it is consistent with schwannoma. 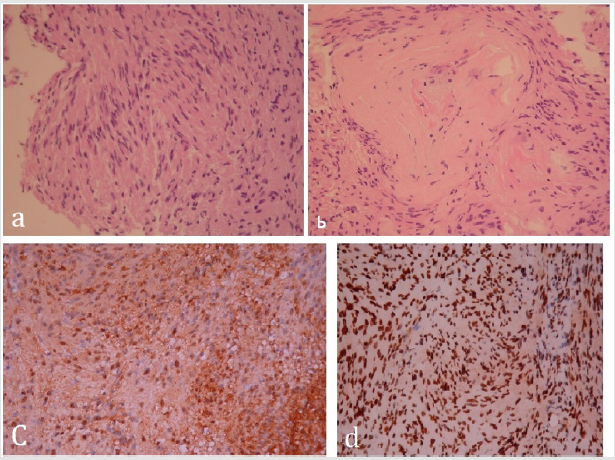 Intraparenchymal schwannomas have been reported in the cerebral hemisphere, sub-frontal, cerebellum, brainstem, sella and in the fourth ventricle [3]. To our knowledge, this giant intraparenchymal schwannoma measuring 13 x 10 x 10cm is the largest volume compared with reported articles [4]. Currently the origin of intraparenchymal schwannoma remains controversial. Menku et al. divided these theories into 2 categories according to histogenesis: developmental and non-developmental groups [5]. Developmental theories postulate that tumour develops from aberrant neural crest cells within the central nervous system or ectodermal Schwann cells transformed from mesenchymal pial cells [6]. Non-developmental theories assume that Schwann cells from adjacent structures give rise to intracranial schwannoma [7]. Despite of the large tumour size and attack of seizure, our patient did not have neurological deficits. The skull bone surrounding this tumour had remodelled into paper-thin cortical bone possibly due to long term compression by the tumour and this finding has not been reported in previous intraparenchymal schwannomas. We assume that these phenomena are due to the slow growing characteristic of this large intraparenchymal schwannoma.
Skull bone remodelling and thinning has rarely been reported due to intraparenchymal tumour, smooth cortical expansion and remodelling with cortical thinning is usually associated with benign slow growing processes [8] such as, porencephalic cysts or arachnoid cysts. Like in previous report, intracranial schwannomas mostly occur in children and young adults [9], which when coupled with the slow growing process, it might be congenital in nature, although current evidence remain uncertain. In comparison of our case to those reported, the developmental theory is more likely, due to the young age of diagnosis and cortical bone scalloping from the chronic increase in intracranial pressure and tumour compression [10], however, there are only few molecular and histological evidence to support this theory, thus further studies are warranted.