Objectives: To explore the role of innate lymphoid cells (ILCs) in the inflammation of oral lichenoid reactions (OLR) and to compare the difference between oral lichen planus (OLP) and oral lichenoid mucositis (OLM).

Results: Innate lymphoid cells involve in the inflammation of OLR. The most significant involvement exists in contact stomatitis from topical chemical exposure (OLM-contact).

Oral lichenoid reaction (OLR) refers to oral lichen planus (OLP) or oral lichenoid mucositis (OLM). Oral lichenoid mucositis could be one of three conditions, which include lichenoid contact stomatitis from dental restorative materials (OLM-dental), mucosal reaction to systemic drug administration (OLM-drug) and contact stomatitis from topical chemical exposure (OLM-contact). These four oral mucosal conditions share a similar clinical appearance of white reticular striations on the erythematous mucosal base with or without ulcerations. An incisional biopsy is required to confirm the definitive diagnosis [1] (Figure 1). However, it is still challenge for oral pathologists to differentiate four types of oral lichenoid reactions histopathologically. Oral lichen planus (OLP) shows a band-like lymphohistiocytic infiltration immediately demolishing the basal cell layer of keratinized stratified squamous epithelium. Oral lichenoid mucositis (OLM) displays the similar histopathological features as OLP, but may have other features as well, which include patched lymphohistocytic infiltration and /or other inflammatory cells, such as plasma cells, eosinophils, and mast cells [2]. 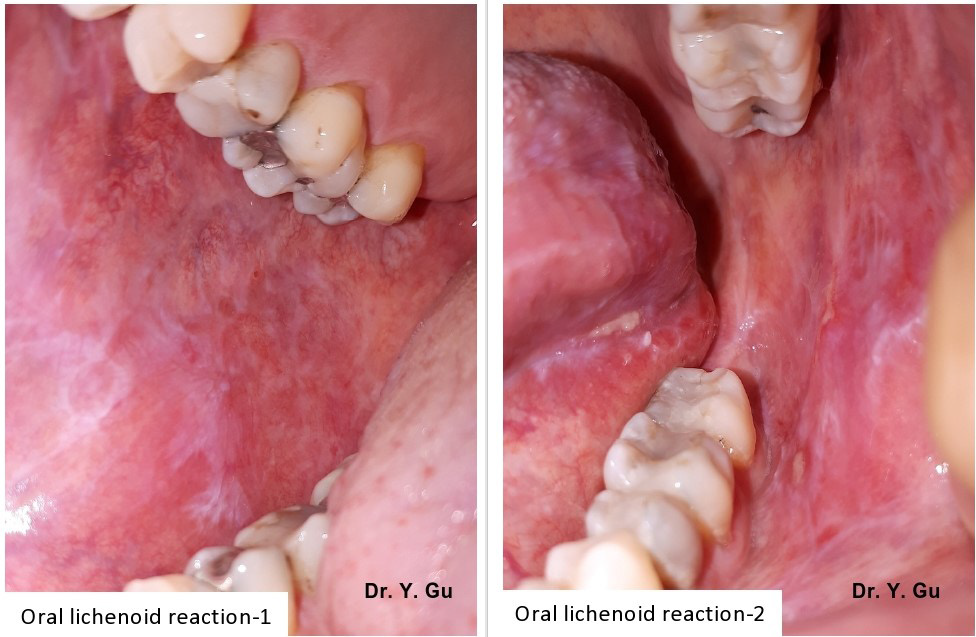 Figure 1: The clinical appearance of oral lichenoid reaction is white reticular striations in the erythematous mucosal base with or without ulcerations.

Nevertheless, there is no gold standard that can be followed (Figure 2). The pathogenesis of OLR is categorized in T-cell mediated hypersensitivity type IV. However, different pathways of four conditions are not clear. Innate lymphoid cells (ILCs) reside at mucosa surfaces and develop from lymphoid progenitors, but are absence of antigen specific B or T cell receptors [3]. ILCs work at epithelial barriers, interact with T cells and play as a regulator in inflammation and tissue homeostasis [4]. There are limited patient-based studies. The purpose of this case-control study based on human tissue specimens is to explore the exact pathway of each OLR. It will benefit for the histopathological diagnosis.

The case-control study used eight antibodies to check biopsy specimens of 28 OLP cases and 45 OLM cases by immunohistochemistry (IHC) technique. OLM cases included 16 OLM-dental, 14 OLM-drug and 15 OLM-contact specimens. In addition, a traumatic fibroma (TF) case was arranged into the study as a non-specific inflammation control. Participants aged between 28- and 72-year-old (average43) and with 82% gender ratio (Female by Male) had lesions on buccal mucosa (64%), gingival (35 %) or tongue (1%). Eight antibodies are anti-T-bet/Tbx21 (T-bet), anti-NKp46 (NKp46), anti-ST2 (ST2), anti-cytokine IL-7 receptor (IL-7R), anti-cytokine IL-22 (IL-22), anti-HAND2-Carboxyterminal End (HAND2), anti-cytokine IL-17 beta (IL-17B) and anti-interferon gamma (INFG). We used a double-blind working protocol to manage the entire study. Specimens in four study groups were numbered alphabetically only by a histologist (AK) herself. The result was unveiled after the scoring and before the data analysis. For avoiding bias, we have positive controls, negative controls, a non-specific inflammation control, the crucial inclusion and exclusion standard in each step. 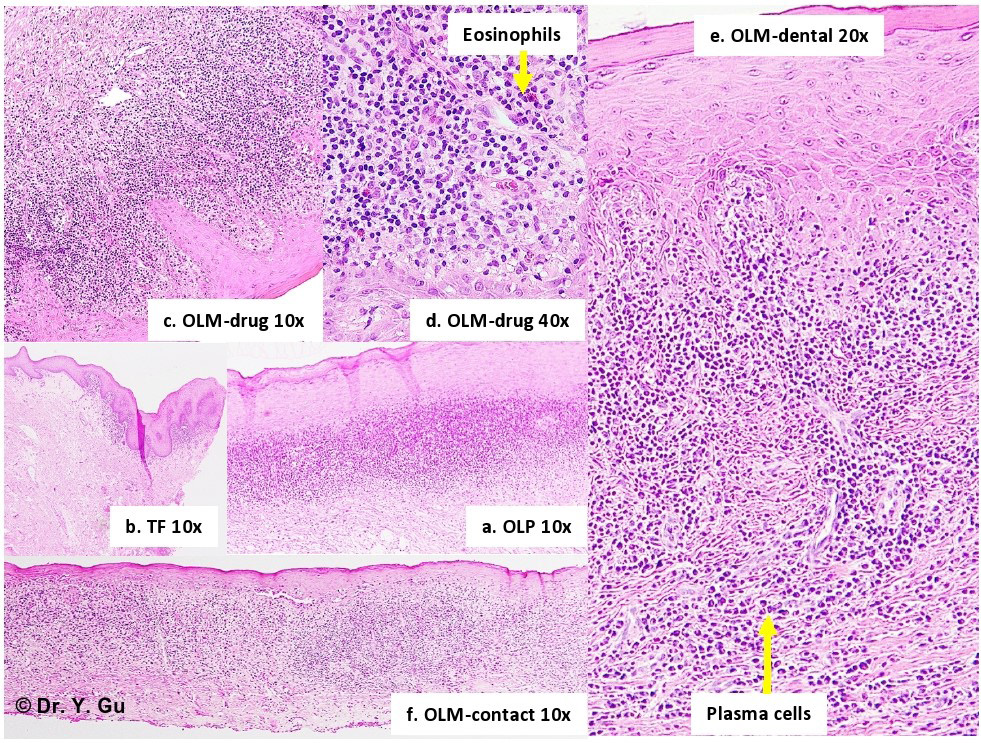 The medical laboratory technologist (AK) sectioned specimens (4 um thickness, 3-5 mm length and 2-3 mm wideness) from paraffin tissue blocks, which were stored in the pathology archive of the OBS. She mounted 5-8 specimens on one glass slide. Therefore, 88 specimens were arranged in 14 slides. We named it “Minor-Array Plate”. Totally 252 slides (14 x 18) were prepared for the IHC procedure. The process was conducted in the OBS laboratory. A chief medical laboratory technologist (PC) conducted the IHC manual staining procedure (Capillary Gap Technology) in the Histology and Research Service Laboratory of Faculty of Medicine, Dalhousie University, Halifax, Canada. The oral pathologist (YG) read all IHC slides. Eventually28 OLPand 45 OLM specimens plus one traumatic fibroma specimen were selected. Exclusion is uneven staining, unusual weak or absent staining, background or art factual staining and inadequate amount of a specimen.

Eight primary antibodies and the antibody dilution buffer were purchased from Abcam (Toronto, ON, Canada M5W 0E9). Second antibody (mouse IgG) and reagents were bought from Inter Medico (Markham, ON, Canada L3R 6E9). All antibodies are able of reacting to human tissue. We toned the optimal antibiotic dilutionin positive control specimens that were recommended by Abcam and published reference. Negative controls were obtained by replacing the primary antibody with mouse IgG (Table 1).

Antigen retrieval was processed in the Biocare Autoclaveby PH 6.0 citrate buffer solution (DeCloaker) immediately after deparaffinization. The enzymatic digestion was conducted by Proteinase K. The procedure of protein block and endogenous enzyme block was achieved by Peroxidizer, Biocare’s background Sniper, automation buffers (Triton-X-100 and Tween 20). The primary and secondary antibody were washed by automation buffer (1% BAS and 0.025% Triton X-100) after enough incubation time respectively. The detection system was MACH 4 probe plus HRP-Polymer with DAB (diaminobenzidine) chromogen. The counterstain was Hematoxylin.

Quantification of the Data and Scoring

IHC slides were analyzed under an optical microscope (Olympus BX51 microscope; Olympus Optical Co., Tokyo, Japan) connected to a digital color camera/Q-Color 5 (Olympus). Images were obtained with10x, 20x and 40x objectives UPLanFI (resolution: 2.75 mm), at a size of 2560 x 1920 pixels (resolution: 1 mm = 3000 pixels), under standard conditions. Pictures were taken from the whole slide to perform the scoring procedure. The proportion of immune-positive cells is used to account scores if the staining located in the nucleus, on the cellular membrane or within the endoplasmic reticulum. The combinative semi quantitative scoring is applied for the secreted staining. The scoring outcome will be the combination of two types of accounting methods if antibodies have two staining locations. The scoring principle is score 1 :< 10% and/or mild stain; score 2: 10-50% and/or mild-moderate stain; score 3: 50-90% and/or moderate-strong stain; score 4:>90% and/or strong stain.

The scoring procedure was conducted by two researchers (TB and EL) and the oral pathologist (YG) respectively for 18 times. The scoring protocol is to score the staining outcome to epithelial region, sub epithelial region and sub mucosal region separately. Each case was marked by three scores. We called it “Sandwich Scoring” (Figure 3). The consistency of the immuno positive staining is different between study groups as well. Oral lichenoid mucositis (OLM) demonstrated a patched staining pattern. Oral lichen planus (OLP) addressed a band-like staining pattern. Traumatic fibroma showed a nest-like staining pattern. Those were recorded in the scoring data as well (Table 2). 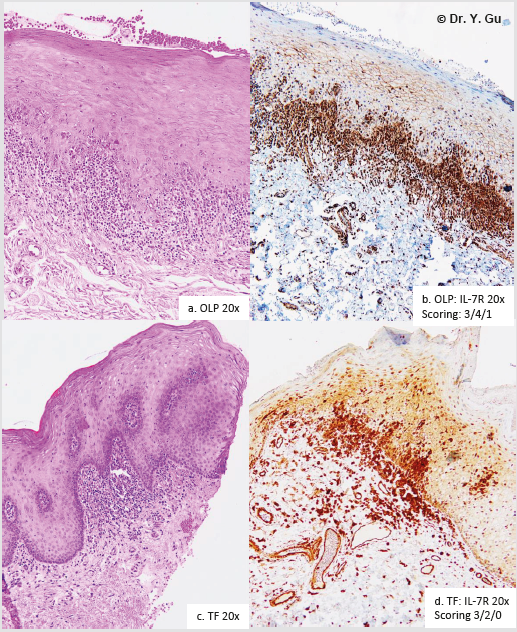 Analysis of the Data

The study size are 28 cases in OLP group, 16 cases in OLMdental group, 14 cases in OLM-drug group and 15 cases in OLMcontact group. The outcome of immune positive scores in each group was obtained by the mean value of all cases. It is surprised that the standard deviation for the mean value in each group is one. It means specimens in each study group showed the same specific immune positive pattern. Therefore, we did the comparison and contrast based on their patterns, rather than on their individual data. We call it “Pattern Comparison”. The comparing baseline is represented by the non-specific inflammation control. There is a significant difference if the mean score in a study group is higher or lower than the score in the same region in the non-specific inflammation control (Table 2).

Epithelium always plays a role of mediators and regulators in immune response [5]. Available molecular signals of epithelial stability and immune response are HAND2, IL-17B, T-bet, INFG, ST2 and IL-17R. We received all immune positive outcomes in four study groups (Table 2 & Figure 4). Traumatic fibroma (TF) was used as a baseline control for the comparison. There was no difference between four study groups and traumatic fibroma case in the immune positive staining of HAND2, which represents the epithelial stability. The OLM-contact group didn’t show any abnormality in the epithelial region of all signals. The OLP group presented with three weaker staining of T-bet, ST2 and IL-17B. The OLM-dental and OLM-drug groups displayed four weaker staining of T-bet, ST2, IL-17R and IL-17B. The weakness of epithelial immune response is prominent in OLM-drug cases and OLM-dental cases, following with OLP, while OLM-contact demonstrated a normal epithelial immune response.

Common molecular signals of innate lymphoid cells (ILCs) are T-bet, NKp46, INFG, ST2, IL-7R and IL-22 [3]. ILCs group 1 (ILC1) is labelled by T-bet, NKp46 and INFG. ILCs group 2 (ILC2) is marked by ST2. ILC3 group 3 (ILC3) is tagged by IL-7R and IL- 22 [4]. We received all immune positive outcomes in four study groups. (Table 2 & Figure 5). Traumatic fibroma (TF) was used as a baseline control for the comparison. There is a significant increase of all signals in the sub epithelial region of four study groups. The stronger expression of IL-22 in the epithelial region of OLP, OLMdrug and OLM-contact groups were noticed. The weaker expression of NKp46 in the epithelial region of OLM-drug group was prominent. Combined with the result of the epithelial immune response in four study group. The intensity of ILCs involved inflammatory process may be arranged in a descending order of OLM-contact group, OLP group, OLM-dental group and OLM-drug group. 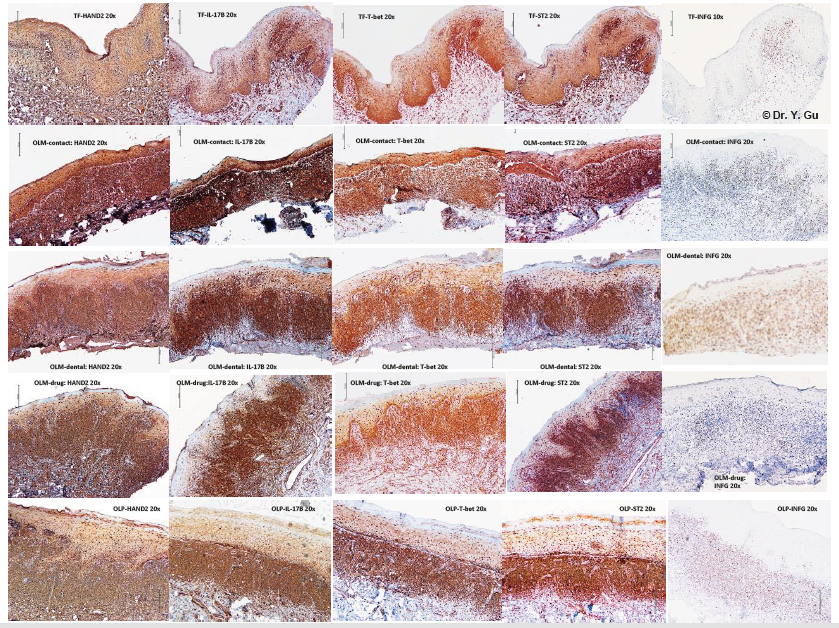 Heart-and neural crest derivatives-expressed protein 2 (HAND2) is encoded by HAND2 gene and is a transcription factor plays an important role in heart, limb and branchial arch development through Sonic Hedgehog (SHH) pathway [www. genecards.org]. A recent research found it reduced expression in breast cancer [6]. There is no significant difference between traumatic fibroma and four study groups. This result provided evidence that all study specimens didn’t have a developmental abnormality and a malignant potential. T-bet is a transcription factor encoded by TBX21 gene involving in developmental process, especially in the Th1 lineage and controlling the INFG expression [www.genecards.org]. T-bet is considered as a molecular signal of ILC1. T-bet was found expression on the epithelium of reproductive tract [7]. There is a significant increase of T-bet in the sub epithelial region of four research groups, while the weaker expression of T-bet on the oral mucosal epithelium of OLP, OLM-dental and OLMdrug groups was detected. It may indicate the status of epithelial immune response.

NKp46 is encoded by NCR1 gene and related to pathways of major histocompatibility complex (MHC) I presentation and ILCs differentiation [www.genecards.org]. NKp46 mainly expresses on NK cells and NK-T cells [8]. There is a significant increase of NKp46 in the sub epithelial region of four study groups, while the OLM-drug group displayed a weaker expression of NKp46 in the epithelial region. It may consider that OLM-drug cases less likely involve in the cytotoxicity process by NK cells and NK-T cells. Interferon gamma (INFG) is encoded by INFG gene and classified by ontology as cytokine activity [www.genecards.org]. INFG is produced by inflammatory cells and mucosal epithelium. There was no difference between traumatic fibroma and four study groups in the epithelial expression of IFNG. In addition, IFNG promotes the differentiation first, and then Th1 produces INFG consequently [9]. The weakness of INFG expression in the sub epithelial region of OLM-drug group implies Th1 less likely involves in the OLM-drug inflammation. 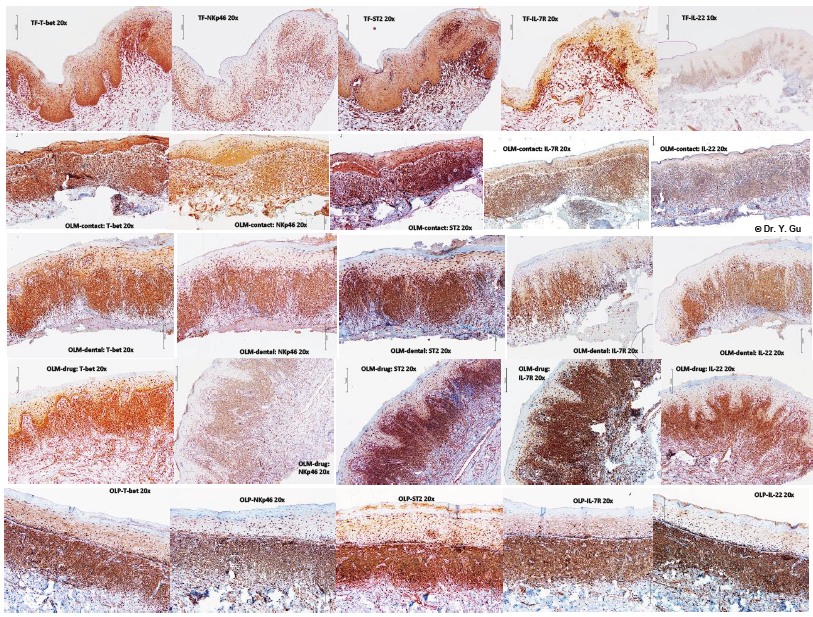 2. Contact stomatitis from topical chemical exposure (OLMcontact) doesn’t show any abnormality of epithelial immune response in molecular markers of T-bet, ST2, IL-7R and IL- 17B. It indicates ILCs is fully and significantly involved in its inflammation.

All authors declare they have no conflict of interest.

All procedures performed in this study were in accordance with the principles of the Tri-Council Policy Statement Ethical Conduct for Research Involving Humans. This study was approved by Health Sciences Research Ethics Board of Dalhousie University with REB number 2016-4020.

This study was funded by Faculty of Dentistry Research Grant of Dalhousie University (No. 36650 and No. 34899).

Objectives: To explore the role of innate lymphoid cells (ILCs) in the inflammation of oral lichenoid reactions (OLR) and to compare the difference between oral lichen planus (OLP) and oral lichenoid mucositis (OLM).

Results: Innate lymphoid cells involve in the inflammation of OLR. The most significant involvement exists in contact stomatitis from topical chemical exposure (OLM-contact).