Finally, HA is considered as simple GAG-type, which is unbranched and unaltered GAG. Its basic repeating disaccharides is composed of GlcA (1→3) GlcNAc [4]. GAGs biosynthesis starts from the rough endoplasmic reticulum (RER), where core protein in synthesised, afterwards, thus core protein is transferred to Golgi, where protein glycosylation occurs. In Golgi, several monosaccharides catalysed from their precursor and attached to the core protein residues in a process known as protein glycosylation, resulting in N-linked or O-linked glycan. N-linked glycans occur when GAG monosaccharides attached to asparagine (Asn) residue withing core protein residues. On the other hand, O-linked glycans occur when GAGs monosaccharides attach to serine (Ser)or threonine (Thr) residues of the core protein [1,5-7]. GAGs structures are very diverse, and their synthesis is not template driven, like that of other biomolecules. All these structural modifications give GAGs their structural heterogeneity and wide range of biological functions. GAGs structural heterogeneity can lead to several cellular and extracellular functions, which depend on GAG types and the cell type that would vary from simple cellular function to cellular morphogenesis [8].

GAGs Derived from Marine Life as A Potential Pharmaceutical Agent

Recently, there has been increase demand for development of new drugs from natural products such as bacteria, animals including marine life. Marine life has derived several pharmaceutical utilities as therapeutic agent [9]. One of the largest phylain the animal kingdom known as molluscs, including snails, bivalves, squid and others. Various molluscs were used for dietary intake, as it has excellent dietary benefits. Over the past several years, there has been an increased demand for developing new anti-cancer agents derived from natural products such as plants, bacteria and animals, including marine life. The main advantage of natural product–derived anticancer drugs that it would have acceptable side-effects than of other chemically synthetic drugs [10]. There are several drugs either approved by the United State Food and Drug Administration (US-FDA), European Medicines Agency (EMA) orin clinical trial that have been derived from marine sources. For instance, Cytarabin that was the first marine-derived chemotherapeutic drug isolated from a sponge (Tethya crypta) [11]. Dolastatin which is a polypeptide product from marine mollusc (Dolabellaauricularia) can inhibit microtubule assembly as well astubulin polymerization, resulting in cell apoptosis. Although it was not successfully approved, this drug progressed to advanced phases in clinical trials, and its derivatives are still being considered as anticancer candidate [12,13].

Halichondrin is a tubulin inhibitor agent, which was isolated from Japanese sponge (Halichondria okadai), is synthetic macrocyclic ketone with enhanced antitumor activities against breast cancer. The US-FDA has approved its synthetic analogue since 2010 [14]. Cyclic-peptide drug Kahalalide-F was isolated from the mollusc (Elysiarubefescens) has anti-lysosomal properties. Ithasentered phase-I clinicalt rials against prostate cancer and phase-II against hepatocellular carcinoma, non-small cell lung cancer and melanoma [15,16]. Didemnin-B isolated from (Carribean tunicate) shows inhibition of DNA-synthase that leads to cell cycle arrest [17]. Many molluscs have been used for dietary intake, as they have great nutritional benefits. Traditionally, molluscs have been used as natural treatments in Chinese traditional medicine; therefore, there has been great interest in investigating their valuable elements to be used as pharmaceutical resources [18]. The high content of uncommon polysaccharides structures in marine organisms make them a favourable candidate of natural products with various pharmaceutical benefits, including in cancer therapy. Generally, mollusc soft-body structural investigations have revealed high amounts of carbohydrates with some proteins and lipids, which makes carbohydrates a major area of interest from a pharmaceutical perspective [19].

Polysaccharides from vertebrates and invertebrates have emerged as powerful platforms for medical utilities, as they have various biological activities such as immunostimulatory, antioxidant, and antitumor activities [9,20,21]. Polysaccharides isolated from invertebrates have shown very different structures to common mammalian polysaccharides in terms of monosaccharide composition, molecular weight, degree of sulphation, type of glycosidic linkages, and branching points. For instance, a novel polysaccharide isolated from the head of ashrimph as a novel combination structure between heparin and HS known as a hybrid hep/HS structure [22]. This structural diversity in polysaccharides has generated additional features for the senovel molecules that could make them potent tool singlecobiology, especially as pharmaceutical agents [9]. Although there are several studies of marine life as source of promising biologically active substances that can be used as pharmaceutical target for various disorders such as cancer, however, various purification techniques were used to purify biologically active GAG and using different structural analysis techniques to characterize this active compound made this field of carbohydrates challenging. These major issues in biologically active GAGs from marine life including, extraction procedure, purification step and characterisation technique, which has created a wide gap on the final structure for GAGs to be used as pharmaceutical agent.

There is no standard method to extract GAGs from in marine life to purified active compounds. GAGs extraction and purification methods from marine source mainly follow three consecutive steps, namely, de-shell (shell removal), de-fat (lipid removal) and proteolysis. However, there are inconsistency in GAG extraction techniques. Indeed, the nature of the GAG polysaccharide derived from marine source, which has an unknown structure and lacks any chromophore that affects adopting an appropriate purification step. For instance, size-exclusion chromatography requires a well-known molecular weight sample, and lectin affinity chromatography requires a particular ligand to allow the complex to interact. This lack of standardization has assigned as major issues in GAGs purification from marine life. Therefore, GAGs with potent biological activity, for instance, antiproliferative or anticoagulant activity were not assigned as pure polysaccharide, but it could be identified as proteoglycan, as other biomolecules could play a role in the biological function. The aim of this review is to evaluate different methodologies used to extract and purify GAG-derived from marine life with potent biological activities.

The literature has demonstrated several purification techniques to obtain purified GAGs from different marine life species. Firstly, de-fat technique, which considered as the first step in GAGs purification. Next, proteolysis technique which is used to ensure removing on N-linked or O-linked proteins that is attached to the polysaccharides chain. Finally, using various chromatographic methods in order to obtain GAG purified chain.

The Defat process is the first step of the purification, which ensure removing the lipid-soluble molecules by using different solvents such as acetone. The procedure begins to remove the shell and submerge the soft body in de-fat solvents. The literature has demonstrated several types of solvents used, different incubation period and temperature used to remove lipid-soluble molecules. 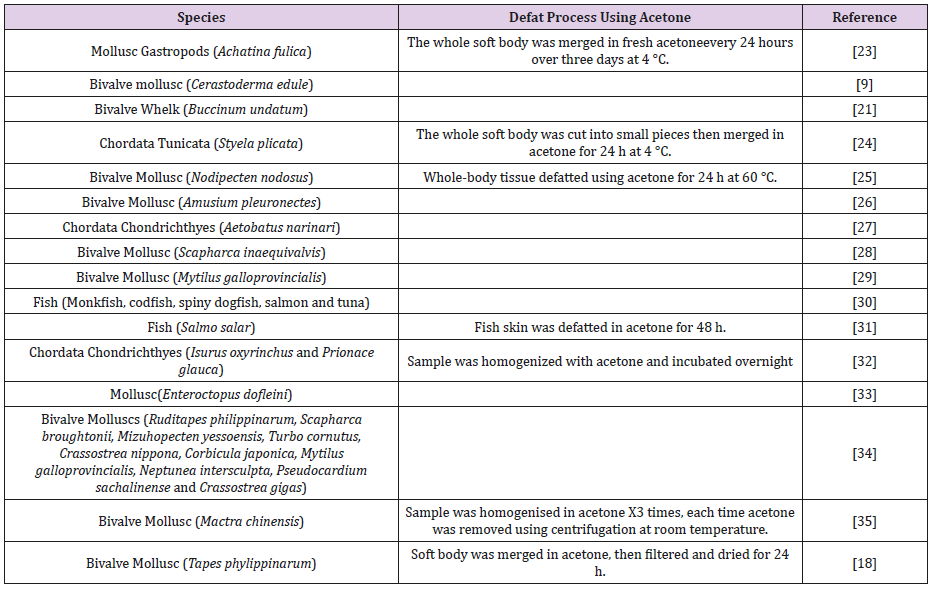 Table 2: Shows method used Na2SO4 as dehydrating agent, which used as a potential step in removing lipid-soluble molecules from sample.

De-Fat Method Using Chloroform/Methanol: One of the most versatile and effective lipid extraction procedures. Briefly, this procedure uses a one-phase alcoholic solvent system, namely chloroform-methanol-water (1:2:0.8 v/v) that rapidly and efficiently extracts the lipids. The extract is then diluted with one volume each of chloroform and water to form the two phased system, chloroform and methanol-water. Any water-soluble contents are thus readily partitioned into the methanol-water, leaving the lipids relatively free of contaminants in the chloroform phase [38,39] (Table 3).

This is the second step in GAG purification process, after defat, which lead to cleave GAG chain from the attached protein chain. This process mainly concerns about cleaving the polysaccharide chain, thaerefore, protein residues were hydrolysed either via enzymatic or chemical techniques. Enzymatic extraction, which mean removing of proteins by using enzymes, for instance, alcalase, papain or pronase [42]. On the other hand, chemical extraction by using different chemical such as Aluminium sulfate [36]. The following literature distinguished different techniques to remove protein residues using different concentrations, centrifugation, incubation period and temperatures. 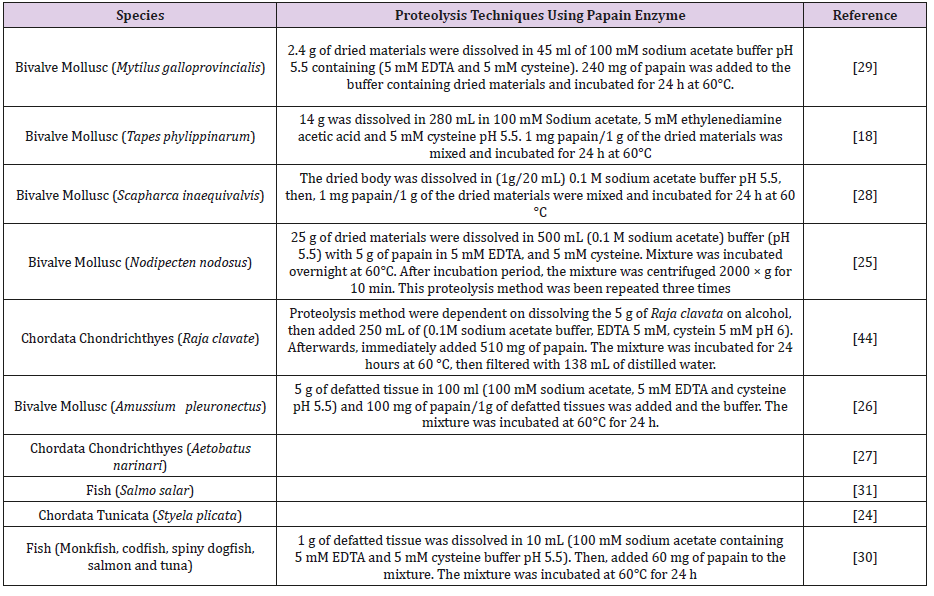 Proteolysis Technique Using Alcalase Enzyme: Is a serine endopeptidase that is suitable for the hydrolysis of proteins. It has previously been used to produce soluble hydrolysates that digest the protein in the defatted tissues (Table 7) [45,46,47].

Proteolysis Technique Using Actinase-E Enzyme: Actinase-E is a protease that is derived from Streptomyces griseus, it is has mixture of three proteolytic activities containing serine protease (Table 8) [48].

Table 10: Demonstrated the use of [Al2(SO4)3] as proteolysis technique.

Table 11: Sows the use of urea and NaOH in GAG purification.

The aim of this process is to purify the biologically active components that is derived from polysaccharides, especially GAGs. The purification techniques were mostly used chromatographic techniques to purify GAGs according to their charge or size structure.

GAG Purification Using Anion-Exchange Chromatography: Anion-exchange chromatography was one of the most common methods for GAGs purification and fractionation. As GAGs known to carry highly negatively charged molecules such as heparin Penta saccharide structure [49]. Therefore, various purification techniques were particularly based on this feature. Anion-exchange resins were used with various solvents such as high molar NaCl solution in order to exchange the biologically active molecules.

Diethylaminoethyl (DEAE)-Sepharose: DEAE is used as weak anion exchanger. In this method, DEAE is attached to Sepharose resin, which is composed of 6% cross-linked agarose (Table 13) [42].

DEAE-Cellulose: In this methods, DEAE anion exchanger is attached to the cellulose resin (Table 14) [51].

This method depends on molecules size, as SEC purifies molecules according to their molecular size. Sephadex is a gel that contains dextran with epichlorohydrin, where G-100 refer to a particular property of Sephadex as G-100 has fractionation range 4000-15000 kDa (Table 15).

The authors declare that there is no conflict of interest statement.