1Department of Electrical Engineering, the University of Texas at Arlington, Arlington, TX 76019, USA

PLGA has been widely used for drug delivery and shown significant improvement in therapeutic areas. PLGA blocks are built from lactic and glycolic acid monomers that can be absorbed by the cell. Therefore, PLGA is a non-immunogenic, non-toxic, and stable polymer for the development of drug delivery. Furthermore, hydrophilic and hydrophobic drug molecules, DNA, and proteins can be encapsulated [1]. PLGA has an excellent biocompatibility profile [2,3]; therefore, the encapsulated molecules achieved target release profile through degradation and erosion of the polymer matrix [4,5].
Nanotechnology offers unique and fascinating approaches in the area of nanomedicine and healthcare application [6,7]. Nanoporous microparticles have been used for bioseparation, drug release, and tissue engineering. In bioseparation, highly nanoporous microspheres have been extensively commercialized in chromatography [8-10]. In drug release, nanoporous microspheres can be designed to be multifunctional carriers for efficiently loading drugs [11,12]. The porous nanoparticles showed higher drug loading and releasing over a period of 30 days from nonporous nanoparticles [13]. In porous PLGA microparticles, autocatalytic effects play an essential role in controlling the drug release. The presence of the nanopores increases the drug molecules’ mobility and altered the drug release mechanisms [14]. In tissue engineering and regenerative medicine, nanoporous microspheres are one of the best candidates for regenerative repair, and tissue engineering [15,16]. These nanoporous microparticles show significant advantages in many practical applications.
The primary aims of this study:
(i) Surface activate nanoporous PLGA microparticles (Figure 1), specifically, the crosslinking of bis (sulfosuccinimidyl) suberate (BS3) with primary amines to form amide bonds.
(ii) Characterize the effect of salt concentration on the formation of nanoporous and microparticles porosity.
(iii) study the effects of the porosity on the covalent amide bond formed between primary amine ligand and BS3 molecules.

We introduce a method that can be used to target extracellular ligand, such as cell ion channels. The channel blockers may crosslink to nanoporous PLGA microparticles and act like a cork in a bottle, preventing the flow of ions in targeted cells until it diffuses off gradually. A targeted cell approach blocking ion channels activity can provide controlled, and a better-tolerated treatment for patients. 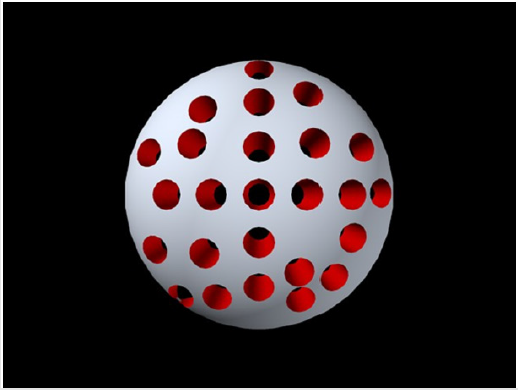 PLGA microparticles were synthesized using a double emulsion method [17]. First, 3% (w/v) of the PLGA solution was prepared by dissolving PLGA in dichloroethane. Then, 0.2 mL of deionized (DI) water was added to the PLGA solution and vortexed for 30 sec to create a water-in-oil phase. A solution of 3%, 0.5%, and 0.1% (w/v) of sodium bicarbonate in DI water were prepared. Then, the sodium bicarbonate solution was added to the water-in-oil phase sample to form nanoporous microparticles. Then, 5% of PVP-k90 solution in DI water was prepared and two mg of BS3 dissolved in DI water (100 μL) was added to PVP-K90 solution and vortexed for one minute to ensure well mixing. The step of adding NaHCO3 solution was skipped for the preparation of nonporous PLGA microparticles, as shown by the schematic flowchart (Scheme 1). It was then added dropwise to the stirring beaker of PVP-k90 solution. Table 1 shows the prepared samples. Next, the solution vials were kept on stir plate overnight in a chemical hood to allow dichloroethane to evaporate. Once the dichloroethane evaporated entirely, the solution was transferred into a 15 ml tube and centrifuged at 4000 rpm for 15 min. The pellets were collected and suspended in phosphate buffer saline (PBS), then freeze-dried at -80 °C.
The freeze-dried microparticles were taken in a plastic tube, washed with DI water, and centrifuged at 4,000 rpm for 15 min three times to form nanoporous PLGA microparticles and remove the trapped salt. Iterative washing in DI water after centrifugation is known to remove the water-soluble salts completely [13, 18, 19]. The pellets were suspended in 5 mL PBS. ZetaPALS DLS detector (Brookhaven Instruments, Holtsville, NY, USA) was used to measure the size and polydispersity of microparticles 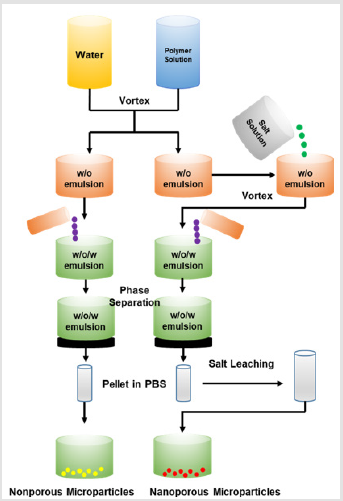 Scheme 1: Schematic flowchart for the procedure to synthesize nanoporous and nonporous microparticles. PLGA microparticles were synthesized using double emulsion method. DI water was added to PLGA solution and vortexed, then NaHCO3 was prepared and added to water-in-oil phase samples. The sample was added dropwise to solution of PVP-K90 with BS3. The sample was kept overnight on stir plate to complete the phase separation. Finally, the sample was washed with DI water to perform salt leaching step.

10 mg freeze-dried microparticles were suspended in 1.5 mL DI water; the sample was diluted for imaging in SEM. DI water was used instead of PBS to avoid crystallization and imaging artifacts stemming from the salts. The sample was sputter-coated with 50 Ǻ thick gold to prevent the surface from getting charged during SEM imaging. The thin layer of gold coating made sure that the glass coverslip surface was conductive enough to image with SEM. 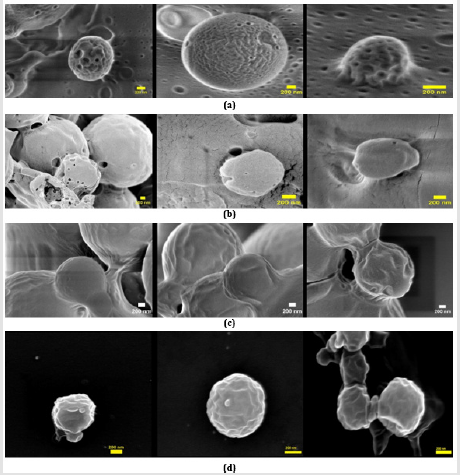 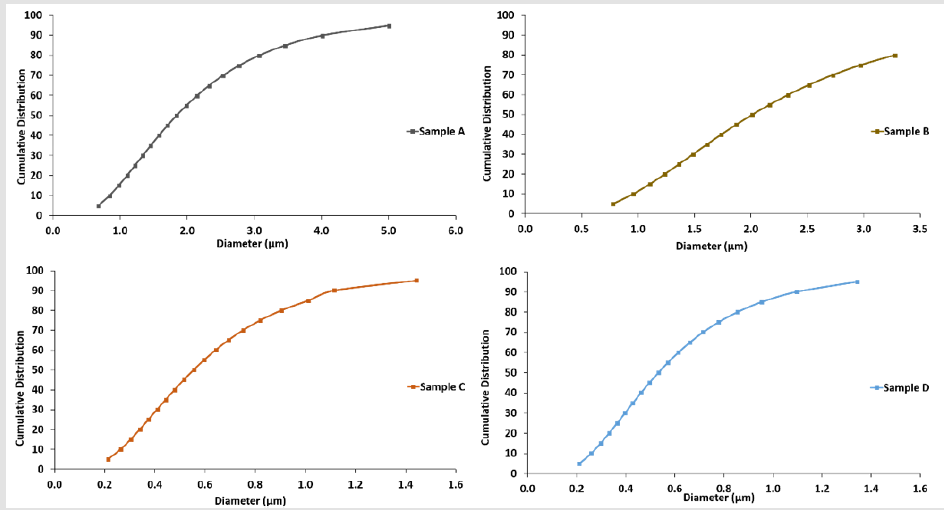 Figure 3: PLGA microparticles cumulative distribution vs. diameter for each sample in Table1.

PLGA microparticles samples porosity has been calculated using ImageJ software (National Institutes of Health, Bethesda, Maryland, USA). Using the analyze particles function within ImageJ, the percentage of pixels in the image have been highlighted by applying the built-in image threshold function (Table 2). Since the pores showed a different threshold than the background, porosity can be calculated in a very efficient technique (Figure 4). 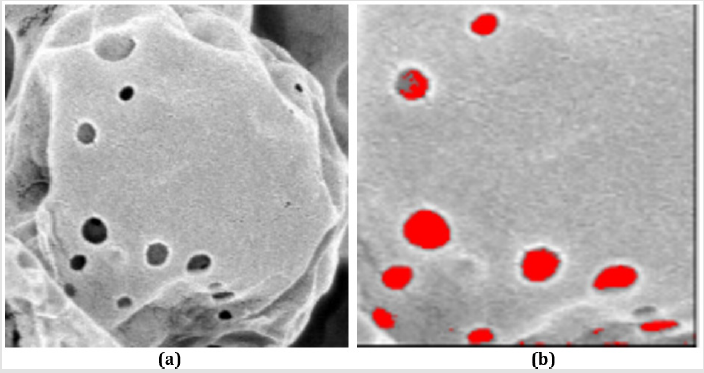 Figure 4: PLGA microparticles cumulative distribution vs. diameter for each sample in Table1. 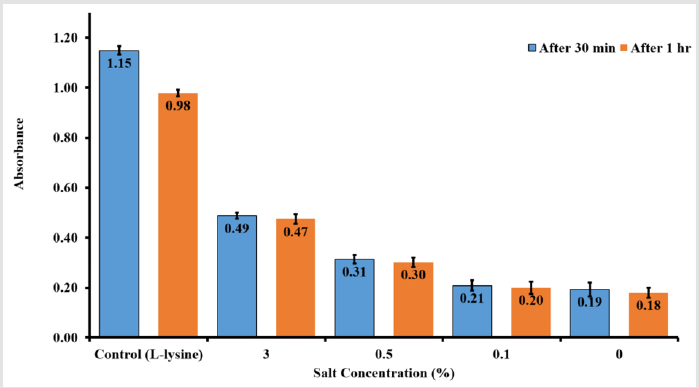 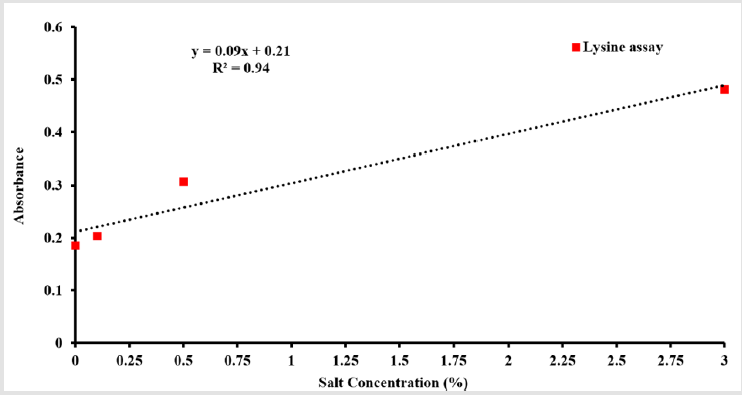 The spherical morphology of the synthesized nanoporous PLGA microparticle makes the movement more natural due to their symmetry; therefore, they travel through indirect pathways with fewer collisions [21]. No direct measurement has been conducted to calculate the percentage of PLGA microparticles that became nanoporous because the PLGA microparticles suspended in the solution undergo Brownian motion. Therefore, the motion of the particles is entirely random depends on the size, viscosity, and temperature. Hence, an estimation of the percentage of PLGA microparticles became nanoporous by reporting the cumulative distribution percentage from Figure 3 that reflects mean diameters from each sample. The result shows ~ 50%, 39.8%, and 50.4% of Sample A, B, and C, respectively, are nanoporous microparticles.
Controlling the nanoporous PLGA microparticles diameter size in such an approach can be very useful for the microparticles applications. For example, platelets (size 2 -3 μm) are known to promote metastasis by protecting cancer cells against natural killer cells in the blood, because of direct contact between platelets and targeted cells [22]. The PLGA microparticles size is very close to platelets; this can be used to assist the physical attachment to the targeted cell surface.
Table 2 shows the pore size measurement and porosity percentage calculation for the samples prepared in Table 1 The analysis shows an increase in porosity (%) as NaHCO3 concentration increases. Based on the porosity analysis, the process efficiency to produce nanoporous depends on the salt concentration. On the other hand, the pore size is random in this case and does not depend on the salt’s concentration. One-way ANOVA test shows a p-value of 0.806, which means no significant difference between the pore sizes from different samples.
The selective targeting approaches require ligands that specifically interact with receptors expressed on the cell surface. Therefore, this means multiple copies of the ligand on the PLGA microparticles surface to increase the binding effects, which results in higher affinity. The sample with higher porosity showed higher Lysine concentration, which can be translated into more primary amines are attached to the surface. The results show an approach capable of controlling the density of ligand that could conjugate on the microparticle surface to enhance the binding, which results in higher affinity. Also, the results showed a stable covalent attachment of Lysine to nanoporous PLGA microparticles.

1Department of Electrical Engineering, the University of Texas at Arlington, Arlington, TX 76019, USA