Dermatologic ultrasound imaging has been rapidly growing in recently years [1,2]. Currently, ultrasonography (US) studies for superficial fibromatoses, palmar fibromatosis, namely Dupuytren’s disease [3] and plantar disease, namely Ledderhose disease [4] which are located in the subcutaneous tissue have been described in ultrasound field. Dupuytren’s disease is a routine for the dermatologist, because patient with subcutaneous nodule may firstly visit a dermatologist. In this review, the author provides an update on the characteristic US appearances in superficial fibromatoses, palmar and plantar diseases.

The international working group, namely DERMUS (Dermatologic Ultrasound) was formed and provided the guidelines [1] and proposed for an assessment training program [2]. Currently, US reports for palmar fibromatosis, namely Dupuytren’s disease [3] and plantar disease, namely Ledderhorse disease [4] which are soft tissue tumors have been described in ultrasound field. We usually perform US studies for dermatologic fields with a high-resolution, broad-band (5MHz-18MHz) linear transducer (Nobulus Hitachi, Ltd.Tokyo, Japan). We have also provided several reports of the dermatologic lesion [5-16].

Soft-tissue masses have the occurrence forms of characteristic locations. The characteristic location and relation to surrounding structure are very important in the accurate diagnosis [22]. In the cystic tumors, ganglion cyst is the most common masses of the hand and wrist regions. It is mutin filled with a fibrous capsule and occurs in association with a joint or tendon sheath [22]. With regard to the solid tumors, palmar fibromatosis, giant cell tumor of the tendon sheath (GCTTS), and peripheral nerve sheath tumor tend to occur in wrist or hand, while plantar fibromatosis, peripheral nerve sheath tumor and Morton neuroma have tendency of occurrence in ankle or foot region [22]. Superficial fibromatoses in adults (palmar and plantar) and children (calcifying aponeurotic fibroma, lipofibromatosis, and inclusion body fibromatosis) are often small slow-growing lesions and their diagnosis have been suggested by location [23]. In addition to these diseases, fibroma of the tendon sheath (FTS) mostly occurs in fingers, hands, and wrists locations [24].

Dupuytren’s disease is a routine for the dermatologist, because patient with subcutaneous nodule may firstly visit a dermatologist. Kelenjian et al. also suggested that superficial fibromatoses relevant to dermatology include palmar, plantar, and penile fibromatosis, knuckle pads, pachydermodactyly and infantile digital fibromatosis [25]. Palmar fibromatosis was described by the French physician Dupuytren and is referred to as Dupuytren disease [23,26,27]. Dupuytren’s disease or palmar fibromatosis characterized by abnormal proliferation of fibroblasts in the palmar fascia and leads to contractures of the fingers. This entity appearing subcutaneous nodule without pain, commonly occur approximately 20% of the people older than 55 years [3]. The fourth and fifth digits may be most commonly affected by palmar fibromatosis. This disease has other types of fibromatosis such as plantar fibromatosis, Peyrone disease, and knuckle pads [23]. Although the etiology of this disease is completely unknown, this entity has the relationship with trauma, microvascular injury, immunologic factors and genetic factors. In addition, palmar fibromatosis is associated with diabetes mellitus, epilepsy, alcoholism, and keloids [23]. Patel et al. [28] suggested that patients with the palmoplantar phenotype of psoriasis were more likely to develop Dupuytren’s disease. With regard to the treatment, Eberlein et al. described that therapy of Dupuytren’s disease in early stage is necessary and radiation therapy shows an effective and safe threatment [29].

US and MRI Appearances

There have been a few reports on US study [23, 30]. Hypoechoic nodules in the palmar subcutaneous tissues, superficial to the flexor tendons [23] or mixed echogenicity [30] were shown on gray-scale US. With respect to color Doppler US findings, the nodule shows hypervascular lesion [23]. MRI appearance show multiple nodular or cordlike, superficial soft-tissue masses arising from the proximal palmar aponeurosis [23]. The corresponding histologic analysis demonstrated that the lesions of low signal intensity with all pulse sequences contained hypocellularity and abundant dense collagen. While, the lesion of intermediate signal intensity corresponds to the more cellular or mixed, with less abundant collagen on both T1- and T2-weighted images. Recently, Morris et al. [3] noted that the lesions were located directly superficial to the flexor tendons with an epicenter at the distal metacarpal, most commonly the fourth digit region. They described that the lesions show hypoechoic nodule and non-compressible condition on gray-scale US. With respect to color Doppler US features, vascular flow was not detected in most cases [3]. Figure 1 shows palmar fibromatosis pathologically diagnosed at te distal metacarpal (MC) region of the fouth digit in the right hand in a 60-year-old man. The small hypoechoic nodule with partially hypoechoic layer was depicted at the level of the distal metacarpal (MC) region on gray-scale US. The size of this nodule is 3 mm in depth and 4 mm in width on short axis view [Figure 1a]. There are no blood flow signals in the nodule on power Doppler US [Figure 1b]. As far as I know, bibliographically, there have been no report of palmar fibromatosis on RTE fearures. Palmar fibromatosis shows blue color with a green color, showing moderately hard nature, moderately low elasticity compared to the surrounding tissue on RTE [Figure 1c]. Flexor tendon represents blue color, suggesting hard nature. Subcutaneous nodule showed low signal intensity on both T1 and T2- weighted images in this case (image not shown). 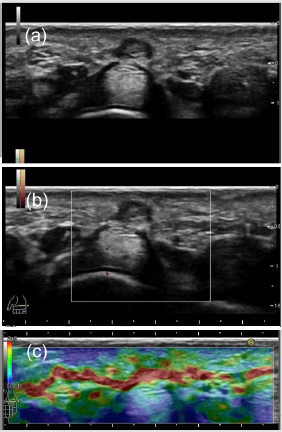 Figure 1: Palmar fibromatosis pathologically diagnosed at the fouth digit of the right hand in a 60-year-old man.

(a): The hypoechoic nodule with partially hypoechoic layer was depicted at the level of the distal metacarpal region in the subcutaneous layer on gray-scale US (short axis view).
(b): There are no blood flow signals on power Doppler US.
(c): Palmar fibromatosis shows blue color with a green color, suggesting moderately hard nature, moderately low elasticity on Real-Time Tissue Elastography. 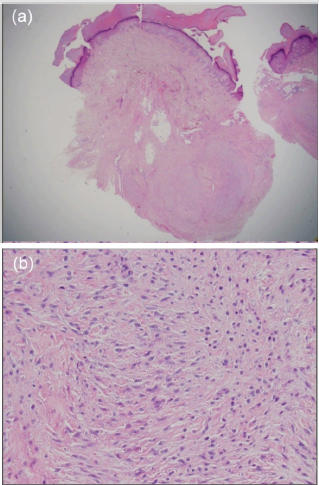 Plantar lesions appear similar to palmar type on gray-scale US. The well-defined or fusiform lesion with hypoechoic or mixed echogenic were depicted in the subcutaneous layer superficial to the plantar aponeurosis [23]. Color Doppler US demonstrate hypervascularity lesion in most cases [23]. Cohen et al. [4] described a novel appearance termed the “comb sign” on grayscale US. They also mentioned that plantar fibromatosis shows mixed echogenicity and posterior echo enhancement on grayscale US. Approximately half cases show internal vascularity in the nodule on color Doppler US. With regard to MRI features, the lesion demonstrates predominantly low to intermediate signal intensity on T1-weighted and T2-weighted images. It is indicated that the termed “fascial tail sign “along the plantar aponeurosis are common and seen on enhanced MRI image [23,26].

As similar to palmar fibromatosis, giant cell tumors of the tendon sheath (GCTTS) commonly occurs in the volar aspect of the finger. Tthereby, it is important to distinguish palmar fibromatosis from GCTTS. GCTTS is a type of benign soft tissue tumor that was first described by Chassaignac [33, 34]. The World Health Organization distinguishes between two types, namely localized and diffuse forms of of GCTTS originating from the tendon and the synovium [34, 35]. GCTTS is also termed tenosynovial giant cell tumor. Clinically, the localized type occurs most frequently in the hand, especially in the volar aspect of the first three fingers [36]. The author suggests that clinical manifestation of palmar fibromatosis appears at the fouth or fifth digits, while GCTTS occurs at the first three digits. With dynamic information, GCTTS do not move with flexion and extension of the digits. Because they arise from the tendon sheath and not the tendon [22]. Histologic examination of GCTTS classically shows a lobulated, circumscribed, cellular tumor [37]. GCTTS consists of three cell types, namely, multinucleated osteoclastlike giant cells, round or polygonal mononuclear cells and foam cells or histiocytes [38]. Wan et al. [39] reviewed imaging of GCTTS and suggested that US showed a soft mass related to the tendon sheath on gray-cale US. They represent hypervascular lesion on color or power Doppler US. With regard to MRI imaging, the lesion typically shows low to intermediate signal on T1- and T2-weighted spin-echo sequencies due to the hemosiderin [39]. Middleton et al. [40] described that this entity shows solid homogeneous hypoechoic tumors associated with the flexor tendons of the fingers on gray-scale US. The lesions represent internal vascularity on color and power Doppler US. While, Wang et al. [41] described that this disease appears as hypoechoc nodule on gray-scale US. Substantial flow could be seen in most lesions [41]. Ansari et al. mentioned that a well-defined hypoechoic mass was depicted on gray-scale US [42]. It is suggested that GCTTS typically exhibits a low signal intensity on T1 and T2 weighted images due to the presence of hemosiderin [34]. On MRI appearances, GCTTS appears as a focal mass, often adjacent to or surrounding a tendon. They usually show intermediate or low signal intensity on T1 and T2 weighted images and are well enhanced with contrast medium administration [43-45].

It is putative that palmar fibromatosis shows hypoechoic nodule which is located in the subcutaneous tissue on gray-scale US. It is plausible that plantar fibromatosis shows mixed echogenicity on gray-scale US and tends to represents vascular flow on color Doppler US. It is suggested that GCTTS show hypoechoic nodule with vascularity on US study and represent low signal intensity on T1 and T2 weighted MR images due to the hemosiderin.

a) The author suggests that Dupuytren’s disease occurs at the distal metacarpal region of the fouth digit in the subcutaneous tissue of the hand.
b) It is strongly suggested that gray-scale US provides the association of the lesion and the flexor tendon and that Real- Time Tissue Elastograhy images reflect the elasticity alteration in palmar fibromatosis.
c) Clinically and genetically, it may be important that Ledderhose disease shoud be considered as a concomitant disease of Dupuytren’s disease.

There are no conflicts of interest.