Conclusion: Efficacy of levofloxacin containing quadruple regimen was high with mild side effects and high medication adherence. Hence, this regimen should be considered the first-line therapy for H. pylori infection.

Monitor and check for H. pylori after treatment: Patients are reexamined after 2-4 weeks to evaluate side effects and adherence. Check H. pylori infection status after 4-8 weeks of treatment with rapid urease test (CLO test) or C13 breath test (C13 urea-breath test). The patient did not take any other antibiotic or bismuth for at least 4 weeks, proton pump inhibitor for at least 2 weeks and H2 receptor antagonist for at least 1 week before re-checking for H. pylori infection. Compliance assessment: <50% of nonconforming drugs were excluded from the study, 50- <80% poor compliance, ≥80% of good adherence, patients with compliance ≥ 80% were classified as subgroup. analysis according to research design (PP). Data was analyzed using software of Stata 12, p <0.05 is statistically significant. Use the χ2 test or calibrate Yate’s to compare 2 ratios. Compare 2 averages by t test.

Between January 2019 and July 2019, we collected 89 previously untreated H. pylori infections (Table 1). 89 patients were tested to confirm H.pylori eradication were included in the researchoriented analysis (ITT) and the research design (PP). 07 patients who received treatment <80% or re-examined not according to the study design or taking additional antibiotics other than the prescribed drug, were excluded from PP analysis. Thus, 82 patients were analysed according to ITT. H. pylori eradication rates for ITT and PP analysis were both high (Table 2). Black feces is the most serious side effect, most side effects are mild and no patient has to discontinue the drug due to side effects (Table 3). The compliance rate ≥ 90% accounts for the highest rate (Table 4). 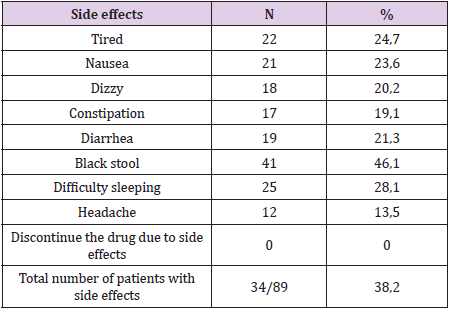 Table 3: Side effects of the regimen.

Table 4: Compliance of the regimen.

Recent meta-analysis studies show that the use of a tripledrug regimen containing levofloxacin as a first or relatively low eradication [5]. According to this study, the 3-drug regimen containing levofloxacin has a very low H. pylori eradication rate, according to ITT is 77.3% and PP is 80.7%. The effectiveness of levofloxacin triple therapy is lower than 80% in many countries and so the study has concluded that this regimen is not recommended when the levofloxacin resistance rate is 5-10% higher. Bismuth has a long history of treating H. pylori because it works synergistically with antibiotics and reduces bacterial load, so it increases the eradication rate of this bacterium. More importantly, there is no H. pylori resistance to bismuth, making bismuth a preferred antibacterial agent for eradicating H pylori. Bismuth acts on H. pylori through multiple mechanisms [6]: bactericidal by creating complexes on cell walls and cytoplasm; reduces bacterial survival by inhibiting enzymes such as urease, catalase, lipase, phospholipase as well as inhibiting the synthesis of ATP and the adhesion capacity of H. pylori, reducing the bacterial load in the stomach. Therefore, the combination of bismuth for triple therapy with levofloxacin in some studies has shown an increase in H. pylori eradication rates for the first time [3,4].

H. pylori eradication effect of levofloxacin 4-drug regimen is high, side effects are not much and patient compliance is high. Therefore, this regimen should be considered as the first regimen for H. pylori infection.

Conclusion: Efficacy of levofloxacin containing quadruple regimen was high with mild side effects and high medication adherence. Hence, this regimen should be considered the first-line therapy for H. pylori infection.