Improved Imaging Quality of the Pediatric Brain on Third-Generation CT

Methods: Image quality was compared between second- and third-generation CT in 51 pairs of age-matched children (age range, 0–5 years) with no abnormal findings. CT images were reconstructed using filtered back-projection (FBP) and IR. The contrastto- noise ratio (CNR) and signal-to-noise ratio (SNR) were calculated at the lentiform nucleus (LN) and white matter (WM). Imaging contrast at the gray–WM interface was rated by two readers.

Conclusion: Imaging quality of the pediatric brain was better on third-generation CT than on second-generation CT. IR may be effective on CT scanners of both generations.

Computed tomography (CT) has been widely used as an initial imaging modality for assessment of intracranial lesions or ruling out their presence. It is also widely used for children, because CT can be completed quickly and is widely available [1-9]. The imagequality of CT is important for the initial detection of parenchymal lesions, including hypoxic-ischemic brain injury, infarction, abusive head trauma, and encephalitis/encephalopathy. All of these lesions may show a subtle decreased delineation of the gray–white matter interface [2,10-20], and may be missed on CT with low image quality. Technical progress including improved detectors, filters, and iterative reconstruction (IR) has led to improvements in CT image quality [21-26], while the pediatric-specific adjustment of protocols is also important for imaging quality [27]. Recently introduced third-generation CT includes advances in detector efficiency, improved temporal and spatial resolution, and newer raw data-based IR algorithms [28,29]. In particular, third-generation CT includes new detectors with integrated electronics with contacting technology to reduce the distance between the photodiode and the analog-to-digital converter electronics; this can reduce noise and artifact [30,31]. The image quality of third-generation CT has been reported to show improvements in angiography [28], coronary stent visualization [32], and truncal cancer imaging [33]. However, improvement in the image quality of pediatric unenhanced head CT has been little evaluated. This study therefore aimed to assess the quality of pediatric brain imaging on third-generation CT, comparing it with second-generation CT.

This retrospective study was approved by our institutional review board, and the requirement for informed consent was waived. In our institution, the radiology department was equipped with third-generation CT and the emergency department was equipped with second-generation CT. Children were scanned when intracranial lesions were suspected or needed to be ruled out after an insult such as head trauma, seizure, or disturbed consciousness, and more children were scanned in the emergency department than in the radiology department. First, a radiologist with 14 years of experience in pediatric neuroradiology reviewed the CT images acquired from April 2016 to May 2018. Children who showed no abnormal intracranial findings and aged ≤ 5 years were included. Infants aged ≤ 2 months were excluded because the Attenuation Value (AV) of white matter changes in the developing brain [34]. CT examinations with severe motion artifact were also excluded. On the third-generation CT, 67 CT examinations performed during the period were identified as having no abnormal findings, although seven examinations were excluded because of the results of followup examinations.
Children were also excluded because of severe motion artifact (n = 6), and reduced radiation doze due to the assessment for the skull (n = 3). Finally, 51 children (mean age, 2.3 ± 1.8 years; range, 3 months–5 years) with third-generation CT examinations were included in the analysis. During the same period, 201 CT examinations performed on second-generation CT were identified as having no abnormal findings. Seven examinations were excluded because of the results of follow-up examinations, and further children were excluded because of severe motion artifact (n = 1), or thin-slice reconstruction (n = 28), leaving 165 children as potential study candidates for the second-generation CT. From these 165 children, 51 were randomly selected (mean age, 2.3 ± 1.9 years; range, 3 months–5 years), while ensuring age-matching with the children in the third-generation CT group.

In the emergency department, CT was performed on a secondgeneration CT (SOMATOM Definition AS+, Siemens Healthcare, Forchheim, Germany). Infants were fixed with an immobilizer and CT scans were generally performed without sedative agents, although triclofos sodium syrup was used for sedation when necessary. The scan parameters included: field-of-view, 220 mm; collimation, 128 × 0.6 mm; pitch, 0.6; tube voltage, 120 kVp; and rotation speed, 0.5 s. Real-time automatic mAs-modulation software (CARE Dose 4D, Siemens Healthcare) was used to reduce radiation exposure. CT images were reconstructed using filtered back-projection (FBP) and IR (sinogram-affirmed IR [SAFIRE]) with a strength level of 2. In the radiology department, CT was performed on a third-generation CT scanner (SOMATOM Definition Force, Siemens Healthcare, Forchheim, Germany) with the following parameters: field-of-view, 220 mm; tube voltage, 120 kVp; rotation speed, 0.5 s; collimation, 192 × 0.6 mm; pitch, 0.8; and tube current set according to the child’s age: 245 mAs for 0-1 years-of-age, 285 mAs for 2-4 years, and 320 mAs for 5-6 years. CT images were reconstructed using FBP and IR (advanced modeled IR [ADMIRE]) with a strength level of 2. Pitch was altered according to the child’s condition: if a child seemed to be restless in the scanner, the pitch was slightly raised. All CT images were reconstructed parallel to the orbitomeatal line with a slice thickness of 5 mm in 5-mm increments. The tube current and CDTIvol based on a 16-cm phantom were noted. As the Dose-Length Product (DLP) varied because of variation in the scanned area, which included the face, jaw and cervical spine in some children, it was not assessed in this study.

Regions-of-interests (ROIs) were placed in the lentiform nucleus (LN) and nearby frontal white matter (WM). ROIs were placed by a radiologist with 14 years of experience in pediatric neuroradiology, and the mean AV and standard deviation (SD) were measured for each ROI (Figure 1). Contrast-to-noise ratio (CNR) and signal-to-noise ratio (SNR) were calculated using the following formulae:

Two radiologists with 9 and 6 years of experience in neuroradiology independently reviewed the CT images, blinded to information on the scanner used or the reconstruction method. Three slices were selected for image evaluation: the level of the semiovale center, the basal ganglia, and the fourth ventricle. Image quality was assessed with respect to gray–white matter contrast using the following grades: 0 = no recognition; 1 = slight recognition; 2 = moderate recognition; and 3 = good recognition.

All statistical data were analyzed using MedCalc version 18.5 (MedCalc Software bvba, Ostend, Belgium). A Kolmogorov-Smirnov test showed that the data were not normally distributed. The scan parameters were compared between second- and third-generation CT using Mann-Whitney test. Values for CNR, SNR, and the assessed scores were compared between second- and third-generation CT using Mann-Whitney tests. The effects of IR on the images from each scanner were assessed by comparing the CNR, SNR, and the visually assessed scores between FBP and IR using Wilcoxon tests. A p-value < 0.05 was considered statistically significant. Interobserver agreements were assessed by intraclass correlation coefficients (ICCs). ICCs were interpreted using the following criteria reported by Landis and Koch [35]: 0.01-0.20, slight agreement; 0.21-0.40, fair agreement; 0.41-0.60, moderate agreement; 0.61-0.80, substantial agreement; and 0.81-1.0, near-perfect agreement. 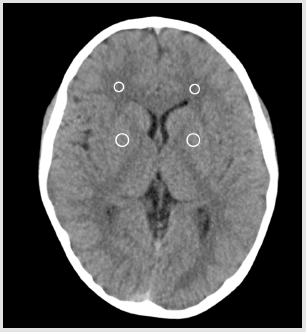 Figure 1: A schema showing region-of-interest placement at the bilateral lentiform nucleus and nearby white matter.

Table 1: Contrast-to-Noise Ratio (CNR) for the Lentiform Nucleus (LN) and the nearby White Matter (WM) and signal-to-Noise Ratio (SNR) for LN and WM on filter back projection and iterative reconstruction on each generation CT. 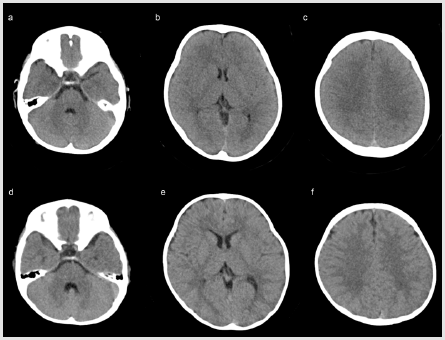 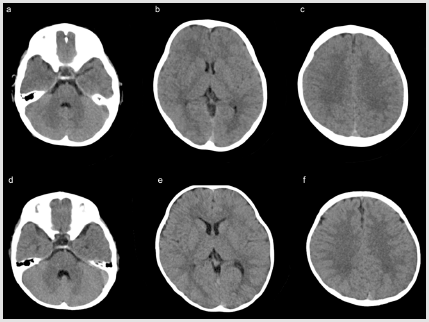 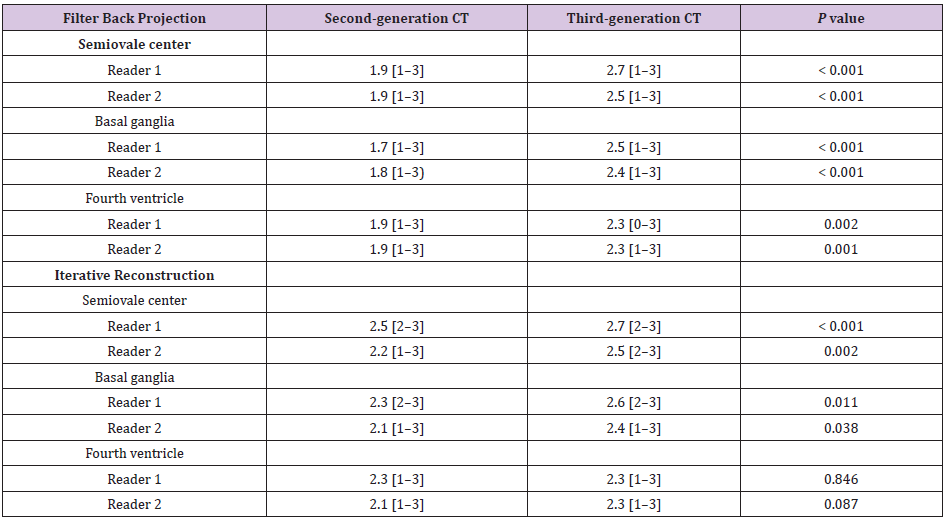 With regard to the influence of IR and FBP on the imaging quality of anatomical features, the visually assessed scores at the level of the semiovale center, basal ganglia, and fourth ventricle did not differ greatly on the second-generation CT with both FBP and IR, whereas on third-generation CT the visually assessed scores were higher at the level of the semiovale center, followed by the levels of the basal ganglia and the fourth ventricle with both FBP and IR. In both scanners, score improvement on IR over that on FBP was relatively low at the level of the fourth ventricles compared with the supratentorial level. This may be due to the fact that the infratentorial structures are surrounded by thick bonystructure, which leads to less effective IR. In particular, the ADMIRE reconstruction may be less effective for improving imaging quality in the posterior fossa. This study is subject to a number of limitations. Although we compared pediatric brain imaging quality between second- and third-generation CT, we did not compare the same subjects between the two scanners. Although we compared age-matched children, conditions such as resting at the scanner differed across the children. We also only assessed the contrast of brain parenchyma in the normal brain; thus, lesion detectability should be investigated in the future. Finally, although the imaging factors were not significantly different between scanners, except for the pitch, the imaging parameters did show slight differences between the second- and third-generation CT, and these might have slightly affected image quality.

In conclusion, the image quality of pediatric brain CT was superior on third-generation CT than on second-generation CT, particularly when FBP reconstruction was used. IR may be effective for improving the contrast between gray and white matter on both generation CT scanners.

We thank radiology technicians at Tokai University Hospital for their skillful help.

The authors declare no conflict of interest, financial or otherwise.

Improved Imaging Quality of the Pediatric Brain on Third-Generation CT

Methods: Image quality was compared between second- and third-generation CT in 51 pairs of age-matched children (age range, 0–5 years) with no abnormal findings. CT images were reconstructed using filtered back-projection (FBP) and IR. The contrastto- noise ratio (CNR) and signal-to-noise ratio (SNR) were calculated at the lentiform nucleus (LN) and white matter (WM). Imaging contrast at the gray–WM interface was rated by two readers.

Conclusion: Imaging quality of the pediatric brain was better on third-generation CT than on second-generation CT. IR may be effective on CT scanners of both generations.