Objects and Methods: In this prospective, cross-sectional study, qualified patients were asked to fill in these questionnaires, including Hospital anxiety and depression scale (HADS) and Simplified Coping Style Questionnaire (SCSQ). Multivariate analysis and binary logistic regression analysis were used to test the associations among symptoms of depression and anxiety, coping styles and influencing factors.

Ovarian cancer has the highest fatality rate among gynecological oncology in developed countries [1], also in China [2]. All over the world, ovarian cancer was diagnosed in nearly 225,000 women and was responsible for estimated 140,100 deaths in 2017[3]. Meantime, the prevalence and mortality of ovarian cancer varies from different countries. It was estimated that, in the United States, 21,200 women are diagnosed with ovarian cancer, and 14,300 die from the disease each year, approximately [4]. In Australia, it was forecasted that near 1480 women would be diagnosed with ovarian cancer, and 1040 cases would die from this disease [5]. And the highest number of deaths (34,575 deaths) [6] caused by ovarian cancer were found in Asian and China, with 110,526 diagnoses. The five-year survival rate is nearly 90% in early stage, but only 30% in advanced stage [7]. However, it’s difficult to diagnose ovarian cancer at early-stage(Ⅰ/Ⅱ) due to the nonspecific symptoms, and there is no recommended screening test. So, the majority of ovarian cancer patients are diagnosed at advanced stage. In Poland, as many as 42.5% of patients with adenocarcinoma were diagnosed in stage IV [8].

As the high diagnosis rate of advanced-stage and high mortality of the disease, patients who are suffering ovarian cancer have to tolerate not only physical pain, but also enormous psychological pressure and huge financial burden [9,10]. Some studies have indicated that depression and anxiety are two common types of psychological disorders in cancer patients [11-13]. Anxiety is often described as the emotion of fear, involving the feelings of tension, nervousness, worry, apprehension and dread for something perceived as threaten in the further. Depression has been defined as an emotion of sadness, hopelessness, lack of energy and gloom [14]. Among many types of cancer patients, the degree of anxiety in female patients was significantly higher than in male patients, and gynecological cancer patients were regarded to have the highest level of anxiety [15]. In the past, poor mental state is often regarded as a normal phenomenon accompanied by the disease, which led medical workers to ignore these symptoms. But in fact, anxiety, depression and other adverse psychological state will not only affect the patient’s subjective feelings, quality of life, but also the disease progression and prognosis [16]. Especially for patients with gynecological oncology, the diseases often cause the loss of function or organism that represents female characteristics, which make the patients feel ashamed. So gynecological cancer patients are more likely to suffer from poor mental state, and interruption treatment than other cancer patients [17]. Several previous studies have shown that a monitoring coping style is related to reduce psychological impact for ovarian cancer [18,19]. So, identifying influencing factors associated with poor psychological status is important to develop appropriate target interventions for ovarian cancer patients [20,21]. Therefore, we conducted this crosssectional study to assess the prevalence of depression and anxiety in ovarian cancer patients in western China and analyze the related influencing factors.

We carried out a cross-sectional study to assess the symptoms of anxiety and depression among ovarian cancer patients and the influencing factors. This survey was from March 2016 to March 2017, and was demonstrated in West China Second University Hospital, Sichuan University, China. The study was approved by the Ethics Committee of West China Second University Hospital, Sichuan University. All participants in the survey filled in informed consent. Inclusion criteria were

Measurements of Anxiety and Depression Symptoms

Coping style was measured by the 20-item Simplified Coping Style Questionnaire (SCSQ) [23]. Each item is rated as four-point Likert scale (0=never do; 1=seldom do; 2=often do and 3=always do). This instrument is a self-report questionnaire which contains 20 items and consists of two subscales: positive and negative coping. The high score of each dimension indicated frequent usage of this type of coping. The internal reliability alpha valued for the positive and negative coping style was 0.793 and 0.835 respectively in the current study.

According to the epidemiology of sample size estimates, the required sample size is 10 times of the research factors and the number of related factors in our study is 10. Meantime consider about the 20% loss rate; 120 participants are needed to be enrolled. Pre-survey showed that the prevalence of cancer-related anxiety and depression were about 50%, the actual sample should be more than 240 cases. The survey data were entered into Epidata, and specialized software was used for managing data. This program facilitates interactive entry and data correction and maintains consistent and accurate trial data. SPSS 17.0 software package was used for statistical analyses. Chi-square test or T test was used to analyze the statistical differences of qualitative data. Significance was set at P<0.05. In the multivariate analysis, binary logistic regression analysis was used and odds ratios (OR) with 95% confidence intervals (CI) were calculated. 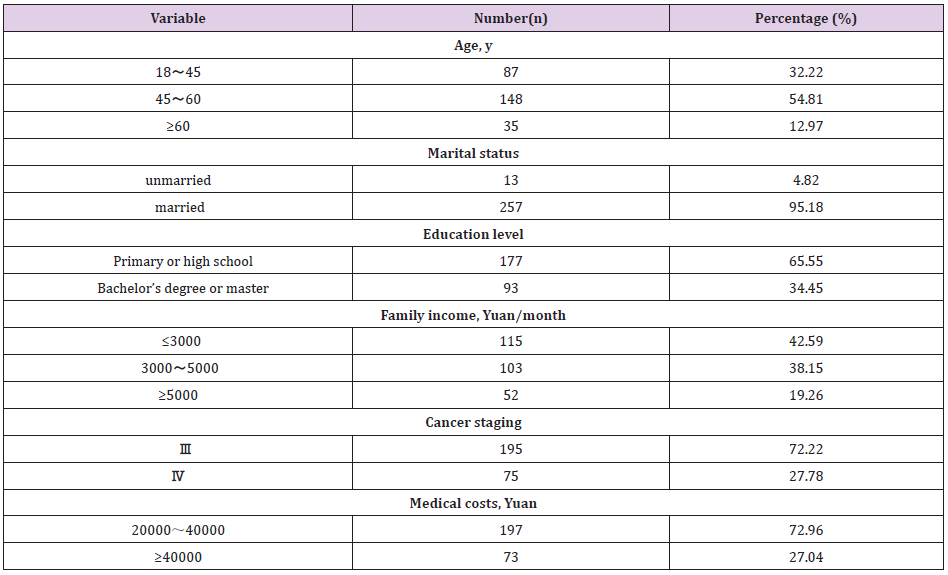 The Prevalence of Cancer-Related Depression and Anxiety 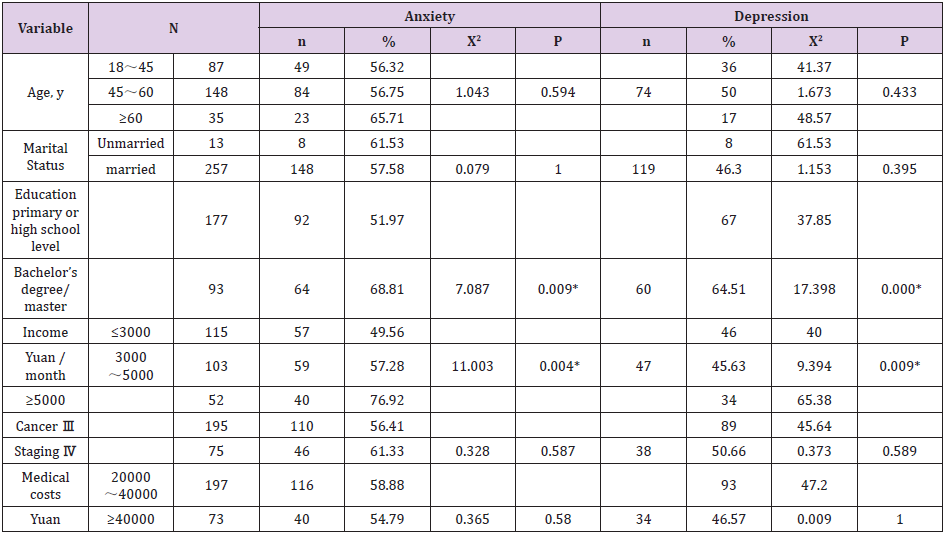 Our study has several limitations. Firstly, we didn’t compare the differences of anxiety and depression levels in patients with early and advanced ovarian cancer and explore the associations between the psychological and stage of ovarian cancer. Secondly, we only focused on the symptoms of depression and anxiety, other psychological disorders, such as post-traumatic stress disorders, obsession and inferiority, have not been investigated. Thirdly, the study adopted convenient sampling method and conducted in only one hospital, the extrapolation of research results was limited. So, additional well-designed studies with multi-center and rigorous methodologies are required.

The study was enabled by the nurses at West China Second University Hospital, Sichuan University. We are grateful to all the participants for their comments and contributions. We thank all those who agreed to be investigated for this project. We would like to express our sincere appreciating to Prof. Jianhua Ren for editing this manuscript.

The authors declare no competing interests.

Objects and Methods: In this prospective, cross-sectional study, qualified patients were asked to fill in these questionnaires, including Hospital anxiety and depression scale (HADS) and Simplified Coping Style Questionnaire (SCSQ). Multivariate analysis and binary logistic regression analysis were used to test the associations among symptoms of depression and anxiety, coping styles and influencing factors.