Burkitt’s lymphoma is one of the most aggressive non-Hodgkin B cell lymphomas. Usual presentation in sporadic Burkitt’s lymphoma which is the prevalent form in the USA is abdominal symptoms 30-38% and CNS involvement in 13-17% cases [1,2]. The patient’s first presentation with leptomeningeal involvement is rare and carries a poor prognosis if left untreated due to comorbidites [3].

A 70-year-old male presented with complaints of headache and blurry vision for 3 days. He was seen and evaluated for toothache at the dentist’s office and was given amoxicillin/clavulanic acid one week ago. After the intake of the first dose, he started experiencing blurry vision. Besides that, he noticed petechiae started appearing on his lower extremities. He reported an episode of nosebleed lasting for 12 hrs. a few weeks back. A review of the system was negative for weight loss and positive for fatigue. Vitals signs were stable. Physical exam revealed distended belly with splenomegaly. CBC was significant for WBC count of 47 k with a peripheral smear showing 70% blasts. Other significant labs included Hgb 9 mg/dl, uric acid 19, platelets 11k. The patient was admitted for workup of leukemia/ lymphoma with blast crisis and tumor lysis syndrome. He was initially treated with Hydroxyurea (HU). Over the next 2 days, his leukocytosis persisted for which HU dose was doubled. His symptoms of headache, nausea and blurry vision continue to get worse. CT abdomen without contrast showed splenomegaly but no evidence of lymphadenopathy. CT scan head without contrast did not show any acute intracranial abnormality.

Ophthalmological evaluation revealed left VI nerve palsy and suggested left eye patch application. Leukemia/lymphoma with meningeal involvement does present with cranial nerve palsy. Lumbar puncture could not be performed due to low platelets. As part of the leukemia workup, flow cytometry of peripheral smear was done, and bone biopsy performed. Seven hours after the bone biopsy was performed under local anesthesia, the patient’s clinical condition got deteriorated rapidly. He was transferred to ICU for tachypnea and altered mental status. The patient was intubated and started on the vasopressor’s support. He was started on broad-spectrum antibiotics. Due to low platelets, bleeding was observed from the NG tube and he was started on proton pump inhibitor. The patient was transfused cryotherapy, platelets, packed red blood cells. Steroids were added. The patient develops shock liver later during the hospital course. His oxygen requirements remained high, and later bronchoscopy revealed right main bronchus hemorrhagic mucous plugs with mucosa showing diffuse petechiae. His flow cytometry and bone biopsy revealed Burkitt’s lymphoma. Given old age, a recent history of MI, ventilator support and unable to tolerate the aggressive chemotherapy, the decision was made regarding comfort care. The patient was terminally extubated on the 7th day of admission.

Burkitt’s lymphoma is one of the most aggressive tumors with a tumor doubling time of 25 hours. It has 3 subtypes based on epidemiology and clinical presentation. Of note, the histologic pattern of all the 3 subtypes remains the same.

Found in the equatorial distribution of African countries, strongly associated with EBV virus infection. High malaria prevalence in these countries leads to increase cell turnover making them more prone to genetic instability. Usually seen in African children 4–7 years old, with a male: female ratio of 2:1. It involves the bones of the jaw and other facial bones, as well as kidneys, gastrointestinal tract, ovaries, breast, and other extranodal sites. The incidence is estimated to be 50 times higher than in the U.S. EBV is found in nearly all cases.

It includes those cases occurring with no specific geographic or climatic association. It accounts for 1% –2% of lymphoma in adults and up to 40% of lymphoma in children in the U.S. and western Europe.

Not associated with low CD 4 counts of less than 200/cubic mm. BL accounts for 30-40% of non-Hodgkin’s lymphomas in HIV patients. Before HAART, the incidence was 1000 times more compared with non-HIV patients. Usually, patients are not diagnosed with HIV and hence the discovery of BL is considered one of the AIDS-defining conditions. HIV-associated Burkitt’s lymphoma shares some pathogenetic features with endemic Burkitt’s lymphoma. HIV infection, analogous to malaria, leads to polyclonal B cell activation of EBV+ cells. Genetically unstable EBV +/- infected B cells lead to Myc gene rearrangement finally leading to clonal proliferation of B cells. HIV is indirectly involved in lymphoma development by chronic antigenic stimulation, decrease immune surveillance and cytokine dysregulation. The most common sites involved are lymph node, bone marrow and extranidal sites with abdomen most common.
Immunodeficiency associated BL is seen after prolong transplant interval, approx. 5 yrs. per one case series, most of the patients were solid organ transplant recipients, others were stem cell transplant. EBV was also common in this subset of patients.
In the USA and Europe, the sporadic variant is prevalent with an average incidence of 3 cases per 100 million population, accounts for 1-2% of all lymphoma with male to female ratio of 3:1. [2,4] BL can have a nodal or extranodal presentation. Extranodal presentation seen in 80% cases, with 2 quarters involving GI tract and 1 quarter affecting head and neck region. The usual presentation of Burkitt’s lymphoma is in the form of abdominal pain, nausea, vomiting, abdominal mass, GI bleed and syndromes mimicking acute appendicitis, small bowel obstruction or intussusception, perforation. An abdominal presentation involving intestines ( jejunum, ileum, cecum, stomach), lymph nodes, spleen, liver, kidney, pancreas, breast, and ovaries have been reported in the literature. At the time of diagnosis, patients have high tumor burden from bulky disease and have elevated lactate dehydrogenase levels, with high uric acid levels. Cases regarding atypical presentations such as BL mimicking Cronh’s disease, origin from the nasal septum, gingival involvement, Kruckenberg tumor by ovarian infiltration with spread to stomach and presentation with peritoneal carcinomatosis has been described in the literature [5-7].
The median age of presentation is 30 years. Rarely Burkitt’s lymphoma can present with CNS or bone marrow involvement and with leukemia presentation. WHO classified both forms of tumors as one clinical entity?
2 different types of classification schemes are used.
a. An Arbor: in most adult trials are based on this classification. The downside is that it does not describe the full extent of extranodal involvement
b. St Jude or Murphey Classification: This classification considers leukemia as a separate entity, unlike WHO classification. Also, it is based on surgery intervention for diagnostic and therapeutic purposes based on the debulking of Burkitt’s lymphoma [4].
Today, the treatment of Burkitt’s lymphoma/leukemia is based on aggressive chemotherapy even in patients with CNS and bone involvement. Surgery is now not considered a required step in the management of the Burkitt’s lymphoma due to better aggressive chemotherapy regimens being available and increase local complications risk [4]. Rarely, patients present with disease that is primarily leukemic (classified as acute lymphoblastic leukemia [ALL], L3 type in the French American-British [FAB] Classification) Burkitt’s lymphoma regardless of subtype expresses typically expresses pan B cell lymphocyte surface antigen e.g. CD 19, CD20, CD 22, CD79a and co-express CD 10, Bcl 6, CD 43, P 53 but not CD5, CD23, Bcl- 2, Tdt. Proliferation fraction is nearly 100% with doubling time 24-48 hours [5]. One of the characteristic of Burkitt lymphoma is the translocation between the c-myc gene and the IgH gene (found in 80% of cases [t(8;14)]) or between c-myc and the gene for either the kappa or lambda light chain (IgL) in the remaining 20% [t(2;8) or t(8;22), respectively]. Other specific lymphoma-associated translocations, such as IgH / BCL-2 and translocations involving BCL-6 are absent. The myc/Ig translocation is detected by performing fluorescence in situ hybridization (FISH) or long segment polymerase chain reaction may increase the chance of identifying the translocation.
Sporadic Burkitt’s lymphoma, most presenting as leukemia, one-third of cases had chromosomal breakpoints in the joining region of IgH [5]. Criteria for diagnosis BL include immunohistochemical stains CD 20 (+), CD10 (+), BCL-6 (+), and BCL-2 (− ) and a proliferative fraction> 95% as per WHO classification [6]. c-Myc gene translocation can be present; however, 10–15% BL can be c-Myc negative. Features such as pleomorphic nuclei and BCL2 positivity are features of double-hit lymphomas or B-cell lymphomas, unclassifiable with intermediate features between diffuse large B-cell lymphoma (DLBCL) and BL. Also, DLBCL usually shows a Ki-67 proliferation rate of about 65–70% (in BL it is essentially 100%). In addition, CD44 is most likely to be expressed in CD10+ positive DLBCL and its negative in BL [5]. In our patient FISCH analysis for high grade/large b cell lymphoma was negative for Bcl6, Myc, t 8:14, T 14:18. Bone marrow was hypercellular around 80%, with near-total replacement by malignant population of lymphoid cells with large nuclei, finely granular chromatin, occasionally distinct nucleoli and scant cytoplasm. Frequent mitotic (Figure 1) with apoptotic cells imparting starry sky appearance were present. Trilieage hematopoiesis was virtually absent. Peripheral smears showed blasts and smudge cells. Out of 17 immunohistochemical stains results were as follows: 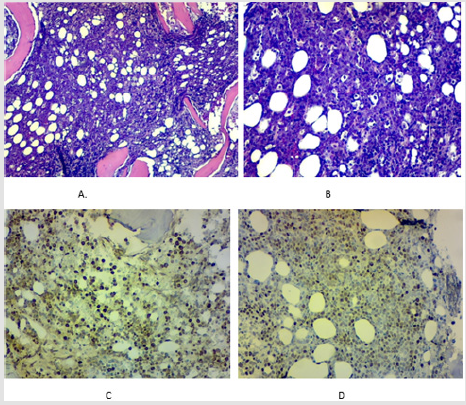 CD45, CD20,CD10,Pax5 +
CD 138 patchy positive predominantly weak
BcL2, bcl6, sox 11, TDt negative
c-Myc + approx. 90%
IGM+
MUM1: negative
Ki-67 Near 100%.
The final impression was high-grade B cell lymphoma most likely consistent with Burkitt’s lymphoma with lymphoma cells nearly 100% of the bone marrow cells.
Flow cytometry analysis of blood showed CD10+ high-grade B cell lymphoma. Negative prognostic factors in BL are as follows.
a. CNS involvement found by CN palsy or presence of blasts in CSF
b. Bone marrow involvement
c. Delayed presentation and diagnosis
d. Old age
e. Advance stage
f. Poor performance status
g. Failure to achieve a cure rate
h. Bulky disease, high LDL
i. IN children age > 15 yrs. [6-9].
Short term multi-regimen chemotherapy such as CALGB 10002, CODOX-M/IVAC, EPOCH, and Hyper CVAD with rituximab is highly effective with a complete remission rate up to 90%. In a small study involving 19 HIV-free patients, the use of a less toxic dose-adjusted EPOCH (etoposide, prednisone, vincristine, cyclophosphamide, and adriamycin) plus rituximab (DA-REPOCH) led to an event-free survival of 96% and overall survival of 100% [5]. In adults, good outcomes have been achieved, with CR rates of 65%–100% and overall survival (OS) rates of 50%–70%. The institution of the CODOX-M/ IVAC regimen (Magrath protocol)-two cycles of CODOX-M (cyclophosphamide, vincristine, doxorubicin, high-dose methotrexate, and intrathecal therapy) alternating with IVAC (ifosfamide, etoposide, high-dose cytarabine, and intrathecal therapy)-for high-risk disease, and for those with low-risk disease (e.g., one extranodal site or completely resected abdominal disease with normal LDH), three cycles of CODOX-M. Children and adults treated with this regimen had similar outcomes; the EFS rate at 2 years was 92% for the group as a whole. However, there were significantly associated toxicities, including frequent myelosuppression, mucositis, neuropathy, and some treatment-related deaths.
To counteract these toxicities numerous changes in protocols have been made with good outcomes. New therapies are required to minimize toxicities, especially in older patients. Relapses remain a problem, particularly among higher-risk patients. Novel therapies that have not been tested but could be useful include those targeted against the c-myc gene, DNA methyltransferase inhibitors, proteasome inhibitors, and cyclin-dependent kinase inhibitors. Patients presenting with the leukemic disease as in our case, previously classified as ALL, L3 type. traditional therapies used to treat lymphoblastic leukemia worked poorly. Newer chemotherapeutic regimens are associated with a better outcome but that too comes at the expense of serious toxicities. Our case is unique due to the fact that this patient did not have any abdominal presentation. Even imaging such a CT scan abdomen did not reveal any lymphadenopathy. His MRI brain did not suggest any leptomeningeal involvement, but his cranial nerve VI palsy highly supported the brain involvement. Due to advance age, high bulk of disease, several co-morbid conditions e.g. MI, acute renal failure, acute respiratory failure, and ventilator dependency, we did not proceed with the chemotherapy options. Despite the fact that even with CNS involvement there has been successful remission achieved, in this unique case, the risk of chemotoxicity outweighs the benefits of chemotherapy treatment.

Burkitt’s lymphoma in old age with CNS involvement is a rare presentation with very poor prognosis and non-promising outcomes without intervention.