Objective: The aim was to assess the relationship between morning fractional exhaled NO (FeNO) and nocturnal oxygen desaturation in children. Design: prospective study. Setting: The study was conducted from January 2012 to January 2018, in the division of pediatric at tertiary-care hospital.

Between 1% and 5% of children suffer from intermittent upper airway obstruction during sleep [1,2]. The mean number of desaturation events per hour during sleep (no./hour) is used to calculate the Oxygen Desaturation Index (ODI), which is linked to the magnitude of Obstructive Sleep Apnea (OSA). OSA leads to a disruption of ventilation and intermittent low blood oxygenation, resulting in systemic airway inflammation and increased oxidative stress [3-5], with potential risk of cardiovascular disease, hypertension, neuropsychiatric and developmental disorders [1-3]. ODI during sleep can be measured simply using an at-home pulse oximeter. An ODI >3% measured by nocturnal pulse oximetry will have a 5% error to predict the polysomnographic Apnea- Hypopnea-Index (AHI) [6]. Nocturnal oximetry is useful in settings with limited resources because it predicts sleep-disordered breathing severity [7]. In this way, the ODI can be easily calculated to predict Obstructive Sleep Apnea (OSA) severity [8,9].

Among other cells in the body, the bronchial epithelium produces Nitric Oxide (NO) [10]. NO regulates endotheliumdependent vasodilation of the airways [6]. A biological mediator, it is present in exhaled breath [11]. Fractional exhaled NO (FeNO) is a non-invasive marker of airway inflammation [12]; it is easy to measure and stress-free for the patient [13,14]. A recent metaanalysis reported that FeNO is significantly increased in patients with Obstructive Sleep Apnea Syndrome (OSAS) [15]. To our knowledge, no data are available regarding the relationship between morning FeNO and intermittent nocturnal hypoxic events assessed by at-home pulse oximetry. To fill this gap, we measured morning FeNO levels in children with comorbid atopy and overweight and various degrees of ODI severity during sleep.

Between January 2016 and June 2018, 112 children attending the sleep clinic, University of Insubria, Varese, Italy, were enrolled. The parents reported that their children suffered from nocturnal and daytime symptoms that suggested sleep-disordered breathing [16]. Following at-home sleep oximetry [13,14,17], 109 children (case children; 65.14% males) met our enrolment criteria for the oxygen desaturation index (ODI ≥ 1), while 3 did not (ODI<1) and were excluded. An additional 63 children recruited from the pediatric emergency department were enrolled as controls (males 60.3%). Total numbers of children enrolled and subsequently measured were 172. Written consent was obtained from the parents or legal guardians. None of these children had night-time signs or symptoms of OSA, allergic symptoms or chronic or recurrent respiratory disease or other serious diseases. Physical examination revealed maximum grade 2 tonsils, no ogival palate or dental malocclusion, laryngomalacia, neuromuscular disorders, genetic or craniofacial anomalies. After assessment of general health, weight and height were measured and the Body-Mass Index (BMI, weight in kilograms divided by height in meters squared) was calculated.

The case children underwent at-home pulse oximetry [1,18]. The parents were instructed to turn the device on when the child fell asleep and turn it off when he/she woke up. A sleep diary was provided so that the parents or the child could record nocturnal awakenings. The ODI was calculated with a portable pulse oximeter (Nonin® 2500 PalmSat Digital Pulse Oximeter and Nonin Vision 5.1 software, Nonin, Plymouth, MN, USA) that records and displays oxygen desaturation, heart rate, mean and minimum peripheral capillary oxygen saturation (SpO2), and automatic exclusion of artifact areas. Desaturation was defined as significant when the blood oxygen level dropped by ≥3% [19].

The mean FeNO in exhaled air in 172 children was measured according to an on-line single-breath technique using a HypAir- FeNO system (Médisoft, Sorinnes, Belgium - SensorMedics Italia srl) [18]. Age, weight and height, and morning exhaled FeNO were recorded. The children were told to refrain from food or drinks for at least 1 hour before the exam. The expiratory pressure was maintained between 5 and 20 cm H2O, which ensured closure of the palatal veil and prevented contamination from nasal NO. If two or three measurements were within 10% of each other, the mean was taken [19]. The children are asked to inhale from the mouthpiece and expand their lungs as much as possible to Total Lung Capacity (TLC) and then to exhale at a constant flow of 50 ml/s, until a plateau of NO values was displayed on the device monitor. During expiration, the plateau phase was > 4 s for children aged under 12 years and 6 s in children over 12 years. To facilitate control of inspiratory and expiratory flow, the child was prompted by watching an animation on the monitor that served as visual feedback: when the child blew through the device mouthpiece, a dolphin appeared on the monitor and jumped through a series of hoops during expiration [13]. The onboard software processed the data and created a pressure/time graph of the mean FeNO values.

A skin prick test with commercially available extracts for the most common inhalant allergens was administered to all children [20]. The positive control is a cutaneous reaction to histamine (histamine 10 mg/ml in saline solution of glycerin) which causes a wheal of at least 3 mm. A sufficient or insufficient response to histamine indicated whether the child was taking antihistamine drugs or had experienced hyperresponsiveness. A drop of allergenic extract was introduced under the skin with a sterile lancet [21,22]. The drops were left to dry for 60 s, making sure they did not overlap or contaminate each other. The reaction was read within 15-20 min and compared with the histamine reaction. A positive response to an allergen was manifested as a small, round wheal usually surrounded by erythema.

Table 1: Characteristics of the study population and pulse oximetry measurements. 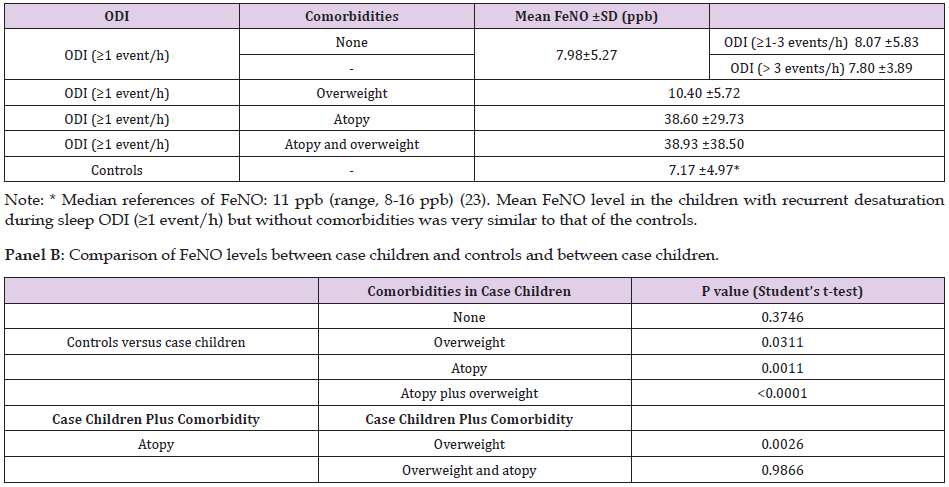 Table 2: Panel A: Exhaled Nitric Oxide (FeNO) in children with ODI ≥1 and controls.

The main determinant of raised FeNO levels is atopy and asthma [23-25]. FeNO is an independent risk factor for asthma and allergic sensitization [26], and in school-age children it is used for clinical monitoring [27] in order to distinguish allergic rhinitis from nonallergic rhinitis [28]. Furthermore, FeNO is associated with various degrees of eosinophil inflammation of the airways [29]. In our study, FeNO levels in the case children without comorbidities were similar to those in the controls, whereas the level was significantly higher in case children with atopy than in controls. Accordingly, allergy alone, but not desaturation, may explain the increased FeNO produced by the upper airways. We did not investigate the numerous factors that affect the amount of eosinophils or differentiate the degree of exposure to allergen by the season in which the measurement was taken (a typical example is a major increase during the pollen season) or adherence to environmental prophylaxis and/or possible drug therapies (steroids). Consequently, there was no way to normalize the population of atopic children in relation to these variables and to measure the FeNO values in each child in the same condition.

OSA is characterized by repetitive collapse of the upper airways and intermittent desaturation events, which can trigger inflammation and oxidative stress. Intermittent desaturation is the main determinant of systemic inflammation in OSA children. Children with OSA are noted to have increased pro-inflammatory cytokine levels [30,31]. Studies involving children with OSA in which FeNO was measured as an inflammatory parameter have produced contradictory results [32-35]. Methodological discrepancies have been claimed as the reason, which is why these studies cannot be easily compared [32]. A mild increase in FeNO was reported in children with OSA [33-35], whereas in our study we found no difference in FeNO between children with higher ODI, those with mild (ODI ≥ 1-3 events/h) and moderate-severe (ODI > 3 events/h) and the controls. Summarizing, OSA alone was not the cause of increased FeNO levels. The mechanism of airway inflammation is different between asthma/atopy and OSA. Eosinophil count in the sputum of asthma patients is significantly elevated [36], whereas an increased neutrophil count and a low number of eosinophils, macrophages, and lymphocytes are found in the sputum of OSA children [37].

Obesity predisposes to a pro-inflammatory state via increased inflammatory mediators. Although, the results are contradictory. Ellulu et al., reported that the inflammatory state in obesity is characterized by decreased NO and elevated reactive oxygen species leading to oxidative stress [38], while cross-sectional studies showed that obesity alone is not associated with increased FeNO levels [26,39]. On the other hand, Verhulst et al., reported increased FeNO levels in children with overweight-associated OSA [40]. Our study showed a slight albeit significant increase in FeNO levels in obese children without atopy compared to controls. Yao et al., reported that excess weight influenced FeNO levels in atopic but not in non-atopic obese children [41]. In our study, FeNO was measured in 30 case children with atopy, 15 of which had normal weight and 15 were overweight. High FeNO levels were measured in case children, with atopy or with atopy plus obesity, whereas the obese children without atopy had a mild increase in FeNO compared to the controls. This difference could suggest that obesity per se is a significant factor contributing to raised FeNO levels. A possible explanation could come from the study done by Salerno et al., that reported low eosinophil count in the sputum of OSA children and a mild increase in FeNO levels [37]. As a final point wew would also underline that the online method yielded FeNO values with excellent reproducibility, even in very young children (3 or 4 years old), in which the animation was particularly stimulating as visual feedback for.

Objective: The aim was to assess the relationship between morning fractional exhaled NO (FeNO) and nocturnal oxygen desaturation in children. Design: prospective study. Setting: The study was conducted from January 2012 to January 2018, in the division of pediatric at tertiary-care hospital.