Air pollution constitutes one of the main environmental threats for human. The World Health Organization (WHO) reports that air pollution kills around 7 million people in the world each year. In Europe, despite the slow improvement in the air quality, air pollution causes around 467 000 premature deaths per year [1]. According to the European Environment Agency, the air pollution monitoring should focus on the following pollutants [2]: nitrogen dioxide (NO2), sulfur dioxide (SO2), ozone (O3) and particulate matter. Road traffic and fossil energy production constitute the major cause of NO2, while SO2 is mainly emitted by the industrial activity. O3 is formed from oxides of nitrogen (NOx) and volatile organic compounds (VOCs) under the action of light. Its concentration in urban area is lower than that in rural area, because it vanishes when it reacts with other pollutants. Particulate matter refers to solid and liquid particles in the air. It is produced by both human activity (traffic, domestic combustion, industry, construction activity) and natural activity (windblown dust, wildfires and volcano eruptions activities). Table 1 summarizes the EU references values and WHO quality guidelines (AQGs) for main air pollutants [3]. It shows that the WHO quality guidelines are mostly stricter than that of the EU, in particular for PM2.5, PM10 and SO2. Since air pollution is dependent on human activity [4], its concentration could have important spatial and time variation. In order to explore this variation, air pollution was measured at different locations of Lille University campus. This paper presents the results of this monitoring program as well as the relationship between measured values and the campus activity. 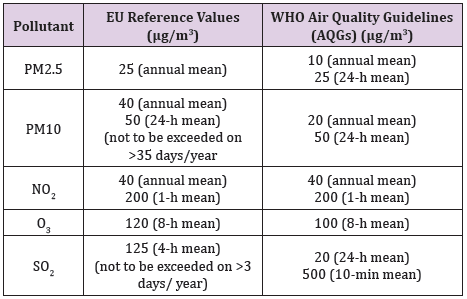 The air pollution monitoring program was conducted at the Scientific Campus of Lille University, located in the City of Villeneuve d’Ascq in the North of France. The area of the campus is around 130 hectares with large green area and around 100 buildings for research, education, administration and sportive activity. The campus is heated by a district heating system using gas energy. The campus is close to main highways, which are particularly congested at rush hours. According to the EU recommendations, the monitoring program included the measurement of the concentration of NO2, SO2, O3, PM2.52 and PM10. Measurements were conducted using the professional air quality station ECOMSMART. To analyze the spatial variation of the pollutant’s concentration, measurements were conducted at 5 locations in the campus. Figure 1 shows these locations. 4 Canton is located at the South access of the campus, which suffers from traffic congestion at the rush hours. IMT is located at the West of the campus, very close to a highly congested highway. Green space, Library and Pariselle are located inside the campus with reduced traffic activity. 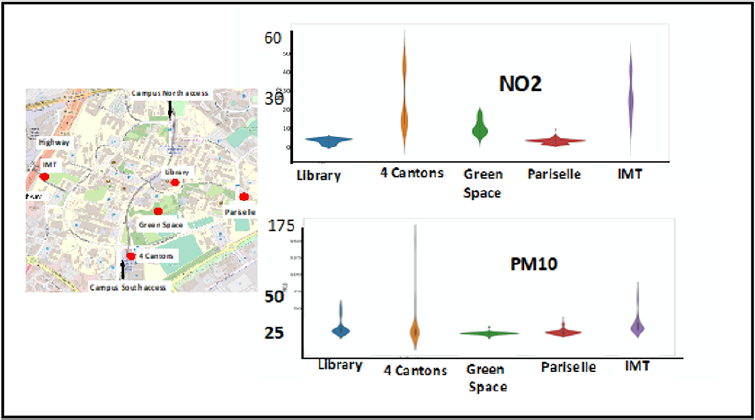 Figure 1: Spatial variation of the air pollution (NO2 and PM10) in the Cmpus.

Table 2: Mean values of the concentration in NO2 and PM10 in the Campus.

This paper presented the results of an air pollution monitoring program, which was conducted in the Scientific Campus of Lille University. Recorded values show that the concentration of NO2 and PM10 inside the campus are lower than that at the campus periphery, because of the high traffic activity at the rush hours near the campus periphery. However, according to the EU and WHO recommendations, the air quality in the campus is globally acceptable. This good air quality could be attributed to the large green area in the campus, the absence of industrial activity, and the reduced traffic inside the campus.