The black rockfish, Sebastes schlegeli (Hilgendorf), is an ovoviviparous marine fish that lives in rock areas of shallow coastal regions in all sea areas around Korea, Japan, and China [1]. In 1987, an artificial seed production technology of black rockfish was developed in Korea and came to get the spotlight when used as a cultured fish; its outturn increased rapidly when mass seed production became available [2,3]. The ability to identify individual animals is essential in fisheries research related to growth, migration, mortality, and stock identification in any species [4,5]. It is especially important that any such tagging system allows the identification to be made in a convenient, rapid, and non-lethal manner [6]. Tagging sites in a variety of body locations can be also successfully used. An example of a visual tag, which has been successfully applied on several fish species, is the Visible Implant Fluorescent Elastomer (VIFE) tag. VIFE tag system can identify the marked animals rapidly and it can’t identify individuals, but it can identify affiliated experimental group of marked animals. Accordingly, the passive integrated transponder (PIT) tag is a suitable method. PIT tags have been used to study the behavior of small mammals, birds, invertebrates, reptiles, and amphibians since it was first used to monitor fish movement [7-9]. PIT tags are advantageous for studying animal behavior because they are small, inexpensive and can be kept effective for a long time and provide individual, unambiguous marks for tagged organisms [9,10].

PIT tag method causes chronic stress condition by injection of PIT tag chip. Plasma cortisol and plasma glucose are recognized as useful indicators of stress in fish [11]. As expected, the plasma cortisol levels increased significantly at the beginning of chronic stress conditions [12], but then declined to their initial values thereafter [13]. [12] stated that “Usually, the phenomenon that plasma cortisol concentration of fishes rises by stress is the first-order reaction and the phenomenon that plasma glucose concentration rises by stress is the second-order reaction by hormone rise reaction caused by stress”. Although PIT tags are used through insertion in the fish body, fish can be affected by its presence. The effects of these tags can differ in fish of different regions. Many fish species have transparent tissues that are suitable for tagging, including the abdominal cavity, head region, dorsal muscle, and tail muscle [10]. Sites suitable for retaining tags differ among species [10]. The aim of this study was to insert PIT tags into black rockfish of two regions in order to assess the stress that occurs in black rockfish through the insertion of PIT tags, and to investigate their physiological responses for determining the most suitable tagging site.

In September 2018, black rockfish, Sebastes schlegeli were obtained from black rockfish hatchery in Korea. The fish were transported and reared in the Fishery Genetics and Breeding Sciences Laboratory of the Korea Maritime & Ocean University in Busan, Korea. Black rockfish used in the experiment were measured under anesthesia using a digital vernier caliper (CD-20CP, Japan) and an electronic balance (JW-1, Korea), and the average body length and average body weight were found to be 16.8±2.23 cm and 103.9±36.73 g respectively.

The populations were divided into five experimental groups: one in which a PIT tag was inserted in the dorsal muscle and another in which a PIT tag was inserted in the abdominal cavity, two sham groups in which each underwent pierce injection only, and a control group (Figure 1). Twenty-four fish were used for each group, except the control group, which was composed of five fish. The blood physiology response experiment began on January 2019. For the fish blood physiology response experiment, the food supply was disrupted 24 hrs prior to sampling. A blood physiology response experiment of PIT tags for each tagging region was performed in water at a temperature of 20 ℃. Blood samples were taken by sampling three fish at the same time from each group at intervals of 1, 3, 6, 9, 12, 24, 96, and 192 hrs after tagging. The experiment was performed in triplicate. Blood was collected from the caudal vascuiature using a disposable syringe (3 ml, Sung Shim Medical Co., Ltd, Korea) with heparin sodium (Shin Poong Pharm Co., Ltd, Korea) within 1 min. 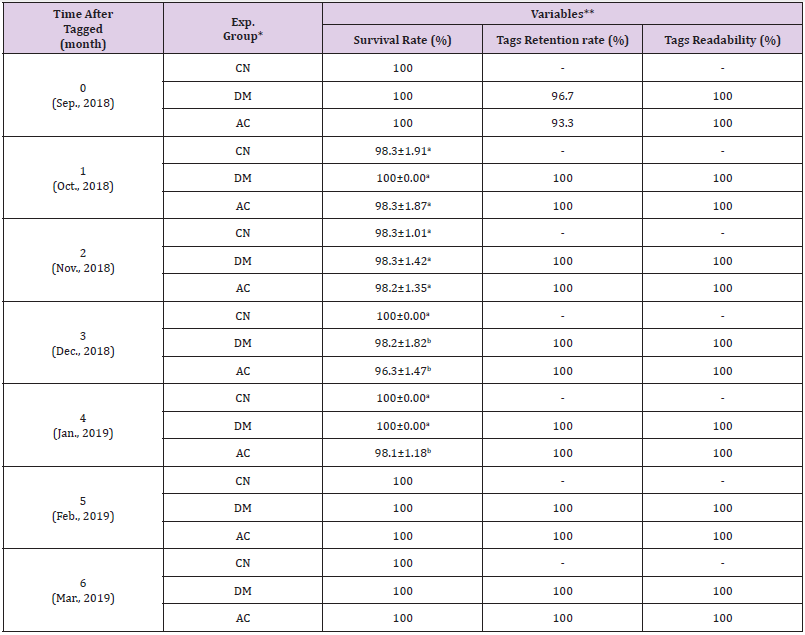 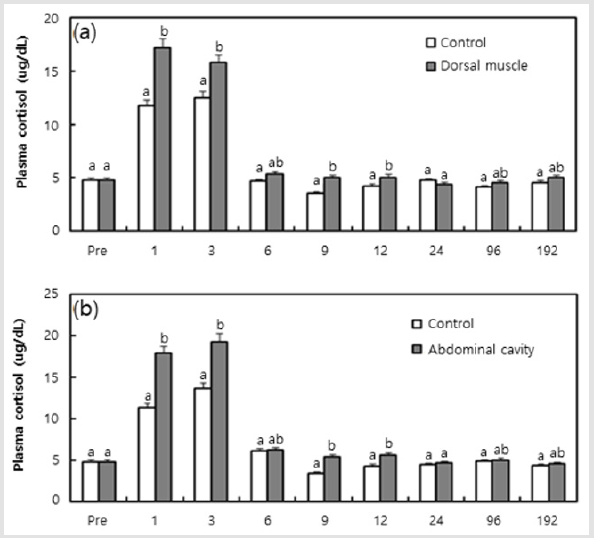 Figure 2: Plasma glucose measurements of black rockfish, Sebastes schlegeli, and measured responses to the positions of PIT tags from 1 to 192 hrs, in addition to the control group: a) Dorsal muscle; b) Abdominal cavity. Values (means of triplicate ± SD) having different superscript letter are significantly different for groups at each elapsed time (P < 0.05). 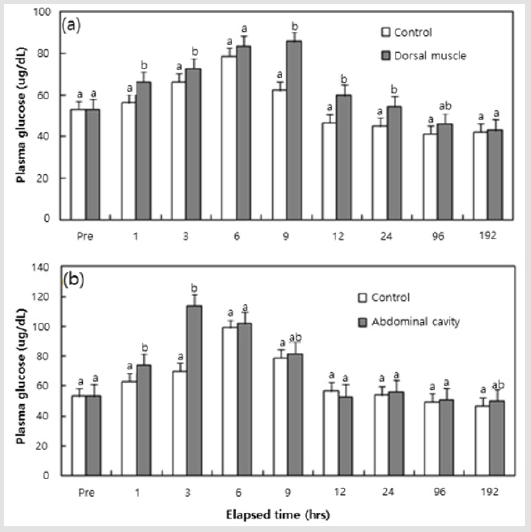 Figure 3: Plasma glucose measurements of black rockfish, Sebastes schlegeli, and measured responses to the positions of PIT tags from 1 to 192 hrs, in addition to the control group: a) Dorsal muscle; b) Abdominal cavity. Values (means of triplicate ± SD) having different superscript letter are significantly different for groups at each elapsed time (P < 0.05).

Implanted tags caused no internal damage, presumably because their midventral location prevented most contacts with organs and dissipated the risk of erosion. The encapsulation of most tags by host tissue and the resulting limited migration of tags inside the cavity may also added to the reduction of this risk [16,17]. [18]’s study has demonstrated that PIT tagging in the abdominal cavity and the dorsal muscle in kelp grouper, Epinephelus bruneus has the potential to reliably identify individuals and is associated with high tag retention rates, readability and fish survival. Although mass gain of the dorsal muscle tagged group was slightly lower than in the abdominal cavity tagged group, no difference was established in all other factors. Based on the criteria and variables outlined in [18]’s study, the use of PIT tagging in the abdominal cavity of kelp grouper is advocated as a practical and reliable method for fish identification and monitoring, without negative effects on growth and mortality. However, foreign materials such as tags can lead to stress, and may cause changes of the blood reactions of fish. When stress is induced, fish consume energy, which drives a response of excess secretion of catecholamine and cortisol and has a considerable influence on the maintenance of homeostasis [12,19-21].

The plasma cortisol levels induced by stress appear to increase at various speed and time according to the species of fish [12]. The plasma cortisol concentration after stress is usually reported to increase to a peak value within 1~3 hrs, and normally recovers within 6 hrs [23]. As a whole, plasma cortisol and plasma glucose values in the sham groups and the groups in which tags had been inserted were similar to the values seen in the control group after 6 hrs. Therefore, the time required for the black rock fish to adapt after the insertion of a tag is approximately 6 hrs. Also, the plasma cortisol and plasma glucose concentrations showed peak values before 6 hrs in this study; these values agree with those reported by [23]. The trends in cortisol and glucose observed in this experiment indicated generalized stress reactions. Glucose formation was increased simultaneously as the cortisol quantity increased. Elevated cortisol secretion under stress increases the activation of plasma glucose by activity of the gluconeogenesis enzyme and this increase is also the result of a second reaction to the first reaction (response of hormone) to stress [12,24].

In this study, groups in which a tag was inserted suffered from more stress than the sham groups. In addition, the group in which a tag was inserted in the abdominal cavity suffered from less stress than the group that experienced insertion of a tag in the dorsal muscle, but this difference was fairly minor. Therefore, the insertion of PIT tags into the dorsal muscles of fish will minimize stress compared to other sites of insertion. This study examined the most suitable site for the stress responses by PIT tags. As mentioned by [9,25], the tissue reaction to the implanted tag included an increased abundance of fibroblasts in the fibrous capsule, which represents chronic inflammation rather than acute inflammation. So, future investigation needs to be focused on determining the most suitable site by the histological responses to PIT tags which were inserted into two sites in this species.

A variety of tagging products have been tried depending on the tagging aim. The passive integrated transponder (PIT) tag, have been shown to be a reliable and effective method for identification and monitoring [9,26,27] as well showing little or no effect on fish growth and survival [10,28]. The effects of PIT tags inserted in the dorsal muscle, abdominal cavity, sham dorsal muscle, and sham abdomind cavity of the black rockfish, Sebastes schlegeli on the tag retension rate, readability rate and physiological responses (plasma cortisol and plasma glucose as indicators of stress) was examined for 6 months. During the experimental period, the tag retension rate and readability rate were greater in dorsal tags than in abdominal cavity tags in black rockfish. While inserting PIT tags, stress can be minimized by insertion in the dorsal muscle of a fish.

The experiments performed in this study complied with the current laws of Korea (Ordinance of Agriculture, Food and Fisheries, No. 1 - the law regarding experimental animals, No. 9982) and the Ethical Guidelines of Korea Maritime & Ocean University, Korea.

I am grateful to the staff of the Fishery Genetics and Breeding Sciences Laboratory of the Korea Maritime & Ocean University, Korea. The author would like to thank anonymous reviewers for their helpful suggestions that improved the quality of this paper.

The author has no financial or personal conflicts of interests.