ARA55 in Cancers: A Double-Edged Sword

Androgen receptor coactivator 55kDa protein (ARA55) was initially isolated and identified from mouse MC3T3-E1 osteoblasts treated with transforming growth factor-β1 (TGFβ1). So, it is also named as TGFβ1-induced transcript 1 protein (TGFβ1I1). Thus far, the gene or amino acid sequence, structure, biological properties as well as peptide synthesis of ARA55 have been well studied. Current studies suggest that ARA55 functions as a molecular adapter in coordinating multiple Protein-Protein Interactions (PPIs) in Focal Adhesion (FA) complexes and the nucleus. Besides, accumulating evidence has shown that ARA55 is also implicated in tumorigenesis and the progression of cancers. However, there are a lot of disputes on the functional role of ARA55 in different cancers. This review summarized the recent findings on ARA55 with particular emphasis on its role in tumors.

ARA55, belonging to the LIM protein family and known as TGFβ1I1 or hydrogen peroxide-inducible clone 5 protein (Hic-5), is initially isolated and identified from mouse MC3T3 osteoblasts induced by TGF β1 and H2O2 [1]. Human ARA55 gene is located at chr16: 31,471,585-31,477,960 (GRCh38/hg38) and contains 11 exons. With an Open Reading Frame (ORF) of 1386bp in length, it can encode a protein polypeptide composed of 461 amino acids with a molecular weight of 55 kDa. Allowing for the similar 4 LD domains in the N-terminal region and 4 LIM zinc finger domains in the C-terminal segment along with 55% amino acid sequence consistent with that of paxillin, and the molecular structure of ARA55 has 72% similarity to paxillin [2]. Specifically, the LIM zincbinding domains play important roles in mediating glucocorticoid receptor coactivation and interacting with multiple proteins such as Androgen Receptor (AR), Cysteine-Rich Protein 2 (CRIP2) and Smad Family Member 3 (SMAD3). The second and third LIM zincbinding domains are involved in mediating expressions of FAs and actin stress fibers, and the third and fourth LIM zinc-binding domains in the interaction with protein tyrosine Phosphatase Non- Receptor Type 12 (PTPN12) and mitogen-activated protein kinase 15 (MAPK15).

The fourth LIM zinc-binding singly interacts with homooligomerization and targets to the nuclear matrix. Therefore, the unique protein structure endows distinctive biofunctions of ARA55. Recently, it has been found that ARA55 as a coactivator interacts with multiple targets and enhance the transcriptional activity of AR--a transcription factor which is activated by androgen and essential in male sexual differentiation [1,2]. Despite the role as a molecular adapter coordinating multiple PPIs in FA complexes and the nucleus, it is also involved in the cell growth, proliferation, migration, differentiation and senescence particularly in cancers [2]. In this review, we have summarized the distribution of ARA55 in tissues and its role in Epithelial-To-Mesenchymal Transitions (EMT) and given high priority to its biofunctions in cancers.

The Low Expression of Ara55 In Somatic Tissues and Cell Lines

ARA55 has a low tissue specificity with a low-to-medium expression in the cytoplasm in most tissues including smooth muscle (Figure 1). ARA55 also reveals a low cell line specificity. The immunofluorescence staining shows that ARA55 protein is mainly localized to FA sites and the cytosol in both U-2 OS and U-251MG cell lines, and to the cytosol of A-431 cells (Figure 2A). The RNA cell line category shows that cell lines derived from brain, skin, breast, sarcoma, fibroblast, endothelial and miscellaneous retain a medium level of ARA55 RNA (Figure 2B). 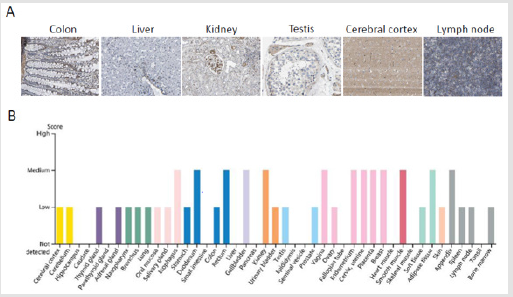 Figure 1: Immunohistochemistry assay reveals that ARA55 has low tissue specificity in most tissues. A. The expression and distribution of ARA55 in colon, liver, kidney, testis, cerebral cortex, and lymph node. B. The expression of ARA55 protein in normal tissues. Note: Data were downloaded from the HUMAN PROTEIN ATLAS. 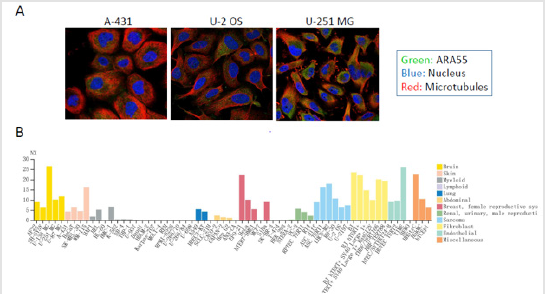 The Involvement of Ara55 In Emt

As ARA55 mainly exists in FAs and nuclei [3-6], it is found to shuttle between the cytoplasm and nucleus and participate in several important physiological processes such as cell adhesion, EMT, cell growth and migration induced by TGFβ1 [7-15]. In the nucleus, ARA55 regulates the transcription activity of corticosteroids, androgens, mineralocorticoids and progesterone receptors as a receptor coactivator through phosphorylation or mediating PPIs [4-6]. Combining with Hsp27, it is also involved in the TGFβ-induced adhesion of vascular smooth muscle cells [14]. In normal breast epithelial MCF10A cells, the phosphorylation level of ARA55 protein significantly increases with the stimulation of TGFβ [13]. Meanwhile, TGFβ-induced high levels of ARA55 facilitate the degradation of matrix in MCF10A cells and the formation of dendrite-like invadopodia to generate EMT a key link in the physiological process of cell invasion and migration. So ARA55 plays an important role in EMT induced by TGFβ1 [10-13].

The Pathological Significance of Varied Ara55 Levels in Cancers

ARA55 is up regulated in several types of cancers compared with normal tissues. In cancer tissues, the expression peaks of ARA55 RNA are higher in several cases of prostate, pancreatic, colorectal, breast, liver and lung carcinomas, etc. (Figure 3). Currently, a handful of studies have investigated biofunctions of ARA55 in tumors, however, the results are controversial. Gulvady et al. have found that ARA55 affects the morphological changes and plasticity of cancer cells during invasion and metastasis [15]. Wu et al. have studied its ultrastructure by electron microscope and found that accompanied by the up-regulated expression of ARA55 the transplantation tumor tissue cells and LoVo colorectal cancer cells develop well and tend to mature with an increased number of intercellular connections, indicating that ARA55 may participate in the occurrence and development of colorectal cancer [16]. ARA55 serves as an activator of steroid hormone receptor in the occurrence of prostate cancer, showing the potential to promote tumor metastasis [17-19]. In breast cancer, ARA55 has been found to be involved in the regulation of tumor adhesion, invasion and migration [20]. 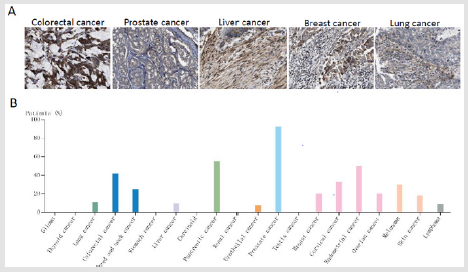 Figure 4: ARA55 servers as a prognostic marker in cancers. A. Renal cancer B. Urothelial cancer. Note: Data were downloaded from the HUMAN PROTEIN ATLAS.

Besides, ARA55 as a scaffold protein contributes to the formation of abdominal aortic aneurysm through MKK4 / p54 / JNK signaling pathway [21]. Qian, et al. [22] have found that ARA55 is highly expressed in pancreatic cancer, and the higher the expression level of ARA55 is, the worse the prognosis of patients will be. The downregulation of ARA55 in pancreatic cancer cells (PCCs) significantly inhibits cell proliferation, invasion and metastasis, and induces tumor cell apoptosis. Noguchi, et al. [23] confirm that there is a high expression of ARA55 in B16-F1 mouse melanoma cells. When the expression of ARA55 has been silenced by shRNA, the cell growth, proliferation, invasion and migration are inhibited to different degrees. In Hepatocellular Carcinoma (HCC), the expression of ARA55 is closely associated with tumor progression [24]. Data from the HUMAN PROTEIN ATLAS reveal that ARA55 can be rated as a prognostic biomarker in renal cancer and urothelial cancer (Figure 4), as those cancer patients with high protein levels of ARA55 have yielded unfavourable prognosis. Therefore, it can be inferred that ARA55 acts as an oncogene in these tumors. Nevertheless, others suggest that ARA55 acts as a tumor suppressor gene.

Evidences show that the expression level of ARA55 in colorectal cancer is significantly lower than that in adjacent tissues; and the overexpression of ARA55 in colorectal cancer LoVo cells triggers endogenous mitochondrial apoptosis [25]. In prostate cancer, the expression of ARA55 significantly decreases and is found to be negatively correlated with the degree of tumor differentiation. The silenced expression of ARA55 has also been found in some prostate cancer cell lines [17,18]. In our previous research, the overexpression of ARA55 has inhibited the growth, proliferation, invasion and metastasis of CNE2 nasopharyngeal carcinoma cells in vitro and has ultimately triggered cell apoptosis. Apart from that, exogenous-ARA55-induced Bcl-2 down-regulation stimulates a series of cascade reactions: a significantly increased expression of downstream cytochrome c followed by the largely unleashed spliceosome of caspase-9 along with an activation of caspase-3 (unpublished data).

ARA55 as a multi-domain protein can bind to a variety of structural proteins and signal proteins, which means it is involved in the formation of FAs in extracellular matrix and bridges the upstream and downstream proteins in a signal pathway. It also plays as a co-promoter of nuclear receptors in the activation of target genes. Like a double-edged sword, the biofunction of ARA55 in malignant tumors varies according to the tumor type. Advancing research on the biofunctions and mechanisms of ARA55 in malignant tumors will unveil the key link in this variation.

This study was supported by Provincial Natural Science Fund of Fujian (Grant no. 2017J05120) and Science and Technology Program of Fujian Province, China (Grant no. 2018Y2003).

The authors declare no conflict of interest in any form.

ARA55 in Cancers: A Double-Edged Sword

Androgen receptor coactivator 55kDa protein (ARA55) was initially isolated and identified from mouse MC3T3-E1 osteoblasts treated with transforming growth factor-β1 (TGFβ1). So, it is also named as TGFβ1-induced transcript 1 protein (TGFβ1I1). Thus far, the gene or amino acid sequence, structure, biological properties as well as peptide synthesis of ARA55 have been well studied. Current studies suggest that ARA55 functions as a molecular adapter in coordinating multiple Protein-Protein Interactions (PPIs) in Focal Adhesion (FA) complexes and the nucleus. Besides, accumulating evidence has shown that ARA55 is also implicated in tumorigenesis and the progression of cancers. However, there are a lot of disputes on the functional role of ARA55 in different cancers. This review summarized the recent findings on ARA55 with particular emphasis on its role in tumors.