In the field of research on skin health, much effort has focused on developing functional skin-whitening products for people with unwanted pigments. Hyperpigmentation of the skin is a result of abnormal accumulation of melanin, a skin pigment that is essential for photoprotection of the human body against ultraviolet (UV) hurts. Previous studies have reported that the first steps of melanogenesis pathway in humans are the hydroxylation of L-tyrosine to 3-4-dihydroxy phenylalanine (L-DOPA) and the oxidation of L-DOPA to o-dopaquinone [1]. Tyrosinase is known as the rate-limiting enzyme and catalyzes both of the reactions in melanogenesis. Antioxidants, such as arbutin or kojic acid [2], may inhibit these oxidation steps and have been used in the treatment of hyperpigmentation [3]. Niacinamide (also known as nicotinamide, 3-pyridinecarboxamide) is the amide of niacin (vitamin B3) that is a physiologically active component in various cosmetics and medicines. Niacinamide is well tolerated by the skin, in contrast to other common forms of this vitamin family (e.g. nicotinic acid and its esters), which often induce uncomfortable skin flushing reactions [4]. It has been reported that oral niacinamide (or niacin) could prevent the development of insulin-dependent diabetes mellitus [5].

Several reports suggest that niacinamide may exert various effects on the skin: it acts as an anti-inflammatory agent in acne [6], as an antioxidant [7], prevents photo-carcinogenesis and photo-immunosuppression [8], and increases intercellular lipid synthesis [9]. The biological activities of niacinamide also include antimicrobial, photo-protection, lighting, and anti-pruritus [10]. Moreover, niacinamide has been reported to promote the repair of DNA damage induced by UV in keratinocytes [11,12]. Previous study has been demonstrated that niacinamide affect pigmentation that works by inhibiting melanosome transfer from melanocytes to keratinocytes [13]. Also, several benefits in terms of improved appearance of photo-aged skin including redness and wrinkles, reduced sebum production and improved barrier function have been described by topical usage of niacinamide [14,15]. As a typical medicine for treating hyperpigmentation disorders, niacinamide blocks the melanosome migration between melanocytes and keratinocytes and suppresses skin pigmentation [16]. Panax ginseng C.A. Meyer has been used in traditional folk medicine in Asian countries.

The P. ginseng fruits have pharmacological effects such as antidiabetic [17], anticancer [18,19], antioxidant [20, 21], antiaging [22], and antiallergic effects [23]. Furthermore, ginsenoside Rb2 (Gin-Rb2) from P. ginseng was reported to have several biological activities, including radioprotective [24], antidiabetic [25], antitumor [26], and antivirus [27] effects. Previous study has reported that the Gin-Rb2 could decrease tyrosinase and MITF protein expression in melan-a cells. In addition, Gin-Rb2 presented inhibition of the body pigmentation in the zebrafish in vivo system [28]. Here, we aim to investigate the anti-melanogenic effects of the compatibility of ginseng lactobacillus ferment or ginsenoside Rb 2 and niacinamde on a B16F10 murine melanoma cell model.

The antibodies were from Santa Cruz Biotech (Santa Cruz, CA, USA) and the ECL reagent was from Millipore (Burlington, MA, USA). All chemical reagents including α -MSH, arbutin, and kojic acid were purchased from Sigma-Aldrich Chemical Co. (St. Louis, MO, USA). Lactobacillus plantarum (BCRC10069) was cultivated in lactobacilli MRS (de Man, Rogosa, Sharpe) broth (Becton, Dickinson and Company, Sparks, MD, USA) at 37°C, for 12 h, and the activated culture was inoculated into MRS broth at 37°C, for 12 h, twice. One gram of Panax ginseng (C. A. Meyer) was added to 99 mL distilled water and then sterilized at 121°C for 15 min. The ginseng solution (pH 6.5) was inoculated with L. plantarum culture [1×108 colony-forming units (CFU)/mL] to a final concentration of 1% (v/v) and fermented at 37°C for 24 h. Samples were collected for analysis at 0 h, 4 h, 8 h, 12 h, 16 h, 20 h, and 24 h. The viable cells of L. plantarum were counted on MRS agar using the plate counting method [29], and the pH and titratable acidity during fermentation were determined using a pH meter (Microprocessor Benchtop pH Meter Model SP-2300, Suntex, Taiwan) and following the method described by Collins, et al. [30].

The cells were exposed to GLF (0.75 mg/mL), ginsenoside Rb 2 (10 μM) or niacinamide (100 μM) for 24 h, then the MTT solution was added to the wells. The insoluble derivative of MTT that was produced by intracellular dehydrogenase was solubilized with DMSO-ethanol (1:1 mixture solution). The absorbance of the wells at 570 nm was read using a microplate reader. The results are expressed as percent viability relative to control. Each sample was measured in triplicate, and each experiment was repeated at least three times. The mushroom tyrosinase activity assays were conducted as previously described [33]. In brief, the aqueous solution of mushroom tyrosinase (200 units/10 μL) was added to a 96-well microplate to result in a mixture with a total volume of 200 μL that contained L-DOPA (5 mM), which was dissolved in phosphate-buffered saline (PBS, 50 mM, pH 6.8), and GLF (0.75 mg/ mL), ginsenoside Rb 2 (10 μM) or niacinamide (100 μM), arbutin (2 mM) or kojic acid (200 μM) were then added into the mixture. The assay mixture was incubated at 37°C for 30 min, and the absorbance of the dopachrome that was produced was measured at 490 nm. The intracellular melanin content in the B16F10 melanoma cells was measured as described by Tsuboi, et al. [34].

After a brief wash, the membrane was incubated overnight at 4°C with several antibodies; these antibodies included anti- MITF (1:500), anti-TRP1 (1:5000), anti-TRP2 (1:1000), anti- MC1R (1:2500), anti-GAPDH (1:2000), anti-tyrosinase (1:1000), and anti-PMEL (1:1000). Following incubation, the membrane was extensively washed in PBST buffer. A subsequent incubation with goat anti-mouse antibody (1:7500) that was conjugated with horseradish peroxidase was conducted at room temperature for 2 h. The blot was visualized using an ECL reagent. The relative amounts of the expressed proteins compared to the total GAPDH content were analyzed using Multi Gauge 3.0 software (Fuji, Tokyo). The statistical analysis of the experimental data points was performed by ANOVA, which was used for the comparison of measured data using SPSS 12.0 statistical software (SPSS INC. Chicago, USA). Differences were considered as statistically significant at p < 0.05.

Table 1: The content of ginsenoside Rb 1, Rb 2 and Rg 3 in GLF. The data was presented as the mean ± S.D. of three separate experiments. 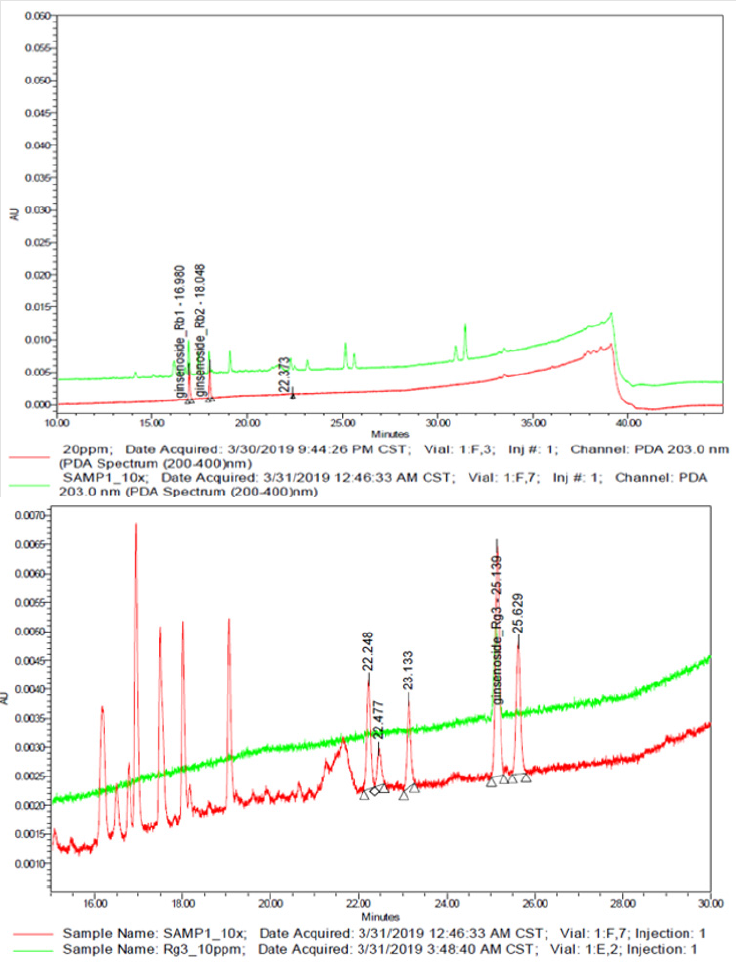 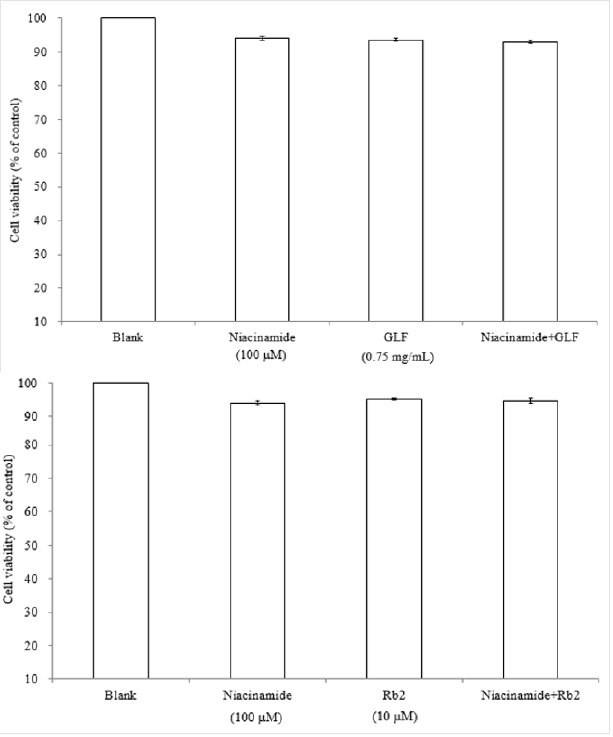 Figure 2: Effects of GLF a) or Rb 2 b) on the proliferation of B16F10 cells. Cell viability was measured by the MTT assay method after 24 h of incubation. Data are expressed as a percentage of the number of viable cells observed in the control group, and each column presents the mean values ± SD from three independent experiments performed in triplicate.

The precision of the developed UPLC method was determined by intra-and inter-day variations. The ginseng lactobacillus ferment (GLF) sample was analyzed as described in the materials and methods sections. There are different ginsenosides in ginseng extract. It has been reported that Rb1[36], Rb2 [28], and Rg3 [37] exhibit anti-melanogenesis activity. We aim to elucidate which ginsenoside could exert synergistically inhibitory effect on melanogenesis with niacinamide, so we analyzed the content of the three ginsenosides by UPLC (Figure 1). The applications of herbal medicines through adequate compatibility may exert synergistic effects and reduce side effects or drug resistance [38]. The health benefits including prevention of diseases such as cancer can be achieved with increased consumption of vegetables, fruits and botanical dietary supplements containing rich sources of phytochemicals. The action mechanisms by which phytochemicals, including ginsenosides could prevent diseases such as cancer are not clear, but potentially appear to involve the Nrf2-ARE-mediated anti-oxidative stress pathway. In addition, ginseng is often consumed as a mixture comprising various ginsenosides [39,40]. 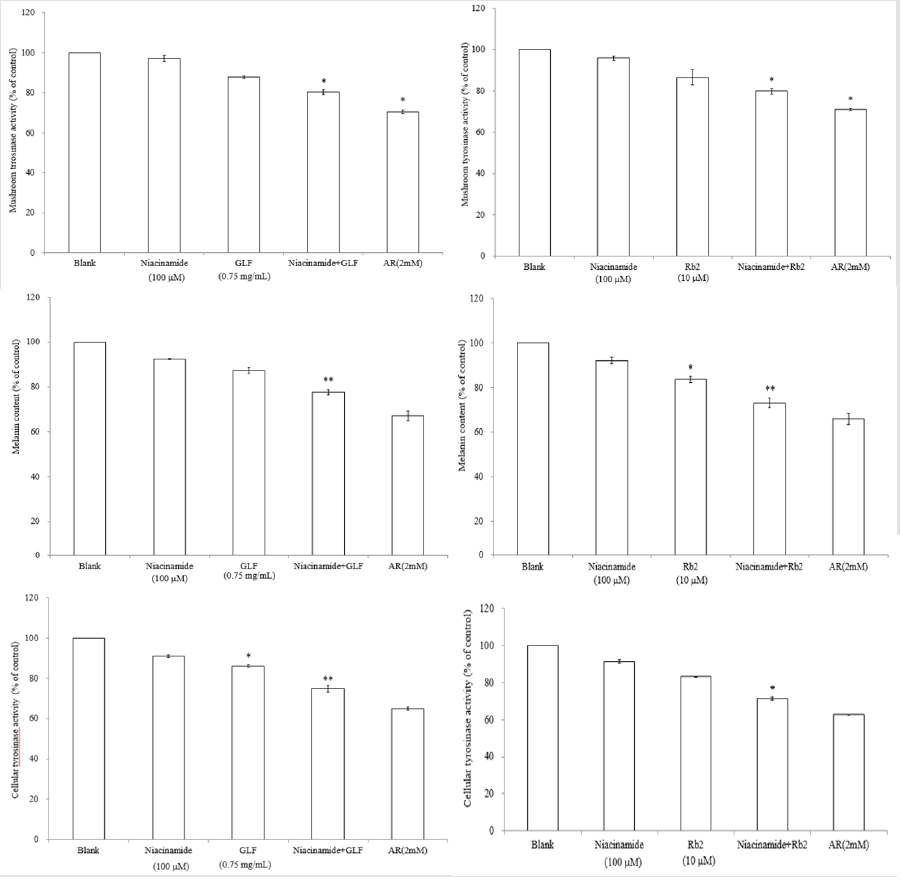 The MTT assay for cell viability is a colorimetric assay method that is used to measure the activity of NADH/NADPH-dependent cellular oxidoreductase enzymes that reduce MTT to formazan dyes, giving the solution a purple color. The results shown in (Figure 2) indicated that GLF (0.75 mg/mL) or ginsenoside Rb 2 (10 μM) had no cytotoxic effect on B16F10 melanoma cell viability. Mushroom tyrosinase is widely utilized as a target enzyme for screening potential activators or inhibitors of melanogenesis. It was reported that all tyrosinases have a binuclear type three copper center within their active site. However, there was no common tyrosinase protein structure found to occur across all specie [41,42]. Mushroom tyrosinase from Agaricus bisporus was reported to be a soluble cytosolic enzyme. In contrast, human tyrosinase is a monomeric membrane-bound glycoprotein. It has been reported that there is no significant correlation between the inhibition of mushroom tyrosinase with human melanoma tyrosinase and melanogenesis [43]. In flavonoids, it has been suggested that anti-tyrosinase activity against mushroom would only appear in parallel with mammalian tyrosinase activity and melanogenesis inhibition [44].

Figure 4: The effects of theophylline on melanogenesis-related protein expression in the B16F10 cells. Western blotting results for tyrosinase, TRP-1, TRP-2 and PMEL17 were shown in (A) GLF and (B) ginsenoside Rb 2.

In the present study, GLF and ginsenoside Rb 2 were observed to inhibit melanogenesis by inhibiting tyrosinase. We hypothesized that the modulation of the melanogenesis-related proteins may be responsible for the inhibitory activity of GLF or ginsenoside Rb 2 on melanogenesis. Hence, the cell lysates were subjected to Western blot analysis to determine the expression levels of melanogenesis-related proteins. In mammals, melanogenesis is regulated by multiple enzymes, such as tyrosinase, TRP-1, TRP-2 and PMEL [45,46]. PMEL17 (also known as gp100 or the product of the Silver locus) is a type I integral membrane glycoprotein that localizes to the lumen of melanosome precursors [47-49]. It is highly expressed by melanocytes and serves as a common target for tumor-directed T lymphocytes in patients with melanoma [50]. The results shown in (Figure 4) indicated that GLF or ginsenoside Rb 2 decreased the protein expression levels tyrosinase, TRP-1 and PMEL17. Interestingly, either GLF or ginsenoside Rb 2 exerted antimelanogeic effects synergistically with low dose of niacinamide (100 μM).

This is the first report on the mechanism of action of the synergistic effect of GLF or ginsenoside Rb 2 with niacinamide on melanin biosynthesis. The present study concluded that GLF or ginsenoside Rb 2 inhibit tyrosinase activity and melanin production in B16F10 cells by declining the expression of tyrosinase, TRP-1 and PMEL17. This finding is of great cosmeceutical importance for the design of skin whiting products that have the potential to reduce hyperpigmentation-related skin cancer risk (Graphic Abstract). 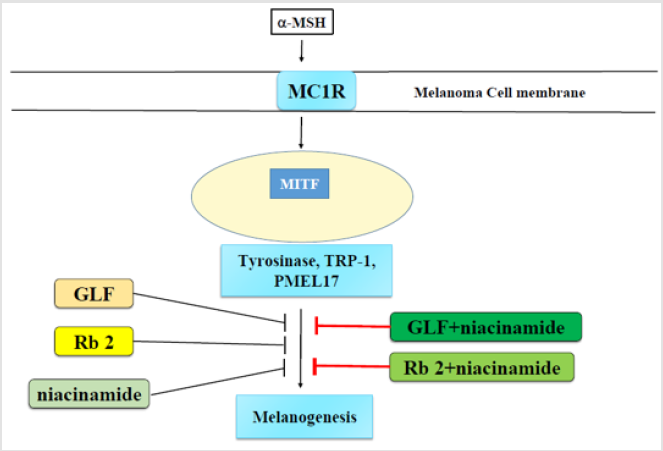 All authors listed, have made substantial, direct and intellectual contribution to the work, and approved it for publication.

This study was financially supported by the Ministry of Science and Technology, under Grant Nos. MOST 108-2314-B-039-050 and MOST 110-2622-8-241-001-TE4.The authors also acknowledge the financial supports by the Higher Education Sprout Project funded by the Ministry of Education (HESP-MOE-HKU-01) and a grant from China Medical University, Taiwan (CMU108-Z-01).

The authors declare no conflict of interest. The funders had no role in the design of the study; in the collection, analyses, or interpretation of data; in the writing of the manuscript, or in the decision to publish the results.