How to Assess Functional Significance of Myocardial Bridges in Athletes: A Personalized Medicine Approach

Myocardial bridging is a congenital coronary anomaly involving a segment of coronary artery coursing through myocardial wall, in a different depth and length, potentially affected by systolic compression. In athletes, such coronary anomaly is most often an incidental finding, due to increased use of high sensitivity noninvasive diagnostic tests. However, since myocardial bridge might potentially precipitate ischemia and even be responsible for sudden cardiac death, athletes need to be cleared for competition by an appropriate diagnostic test. Which is the ideal diagnostic test in such peculiar condition, in which the pathophysiological mechanism of ischemia is unknown and potentially different in different subjects, remains to be investigated. We focused on different diagnostic tests proposed and classified according to the most likely pathophysiological mechanism of ischemia in myocardial bridge. Accordingly, we analysed and discussed on ideal test in athletes with such condition.

Myocardial bridge (MB), first mentioned by Reyman in 1737 [1], is the term that refers to muscle overlying the intramyocardial segment of an epicardial coronary artery. It is characterized by systolic compression of the tunneled segment and remains clinically silent in the majority of cases. The incidence of MB in pathologic series has been reported ranging between 15% and 85% [2,3]; they are currently increasingly recognized in vivo due to the expansion of advanced non-invasive cardiovascular imaging techniques including computer tomography imaging and cardiovascular magnetic resonance [4], while in angiographic series such incidence ranges from 0.5% to 2.5% [5-7]. This large discordance suggests that only a minority of patients with MB are, in fact, at increased risk for clinical symptoms and cardiac events. Myocardial bridges are most commonly localized in the middle segment of the left anterior descending coronary artery. Diagonal and marginal branches may be involved in 18% and 40% of cases, respectively [8]. 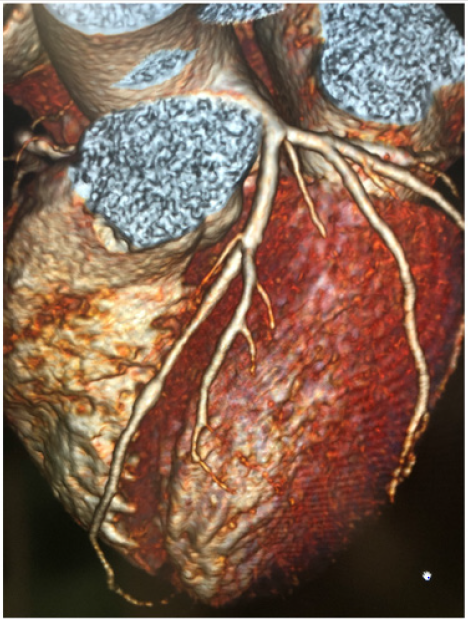 Extravascular coronary compression by means of MB is modulated by myocardial inotropic force and causes intracoronary systolic pressure overshooting and negative systolic gradient across the MB, thus suggesting a possible role of increased inotropic stimulation as precipitating factor of ischemia in myocardial bridges [10,17]. Since the precise mechanism of myocardial ischemia in subjects with myocardial bridges is unknown and it may even be different according to the anatomy of the bridge and the characteristics of myocardial muscle, it derives that which is the best method to assess ischemia in such cases remains to be investigated and clarified. Anomalous coronary arteries have been documented in athletes [18] in whom the determination of the presence of such anomalies is crucial, since sudden death is associated with exercise [19,20]. Moreover, during exercise, diastole shortens due to increased heart rate with increased systolic/diastolic flow ratio and increased inotropic response produces not only systolic, but also diastolic compression, thus reducing flow. Lastly, de novo formation of myocardial bridges might occur in patients with hypertrophic cardiomyopathies [21] and in transplanted hearts [22], thus it is conceivable that they might develop also in athlete’s heart.

The interest in diagnosing the presence and functional significance of bridges in athletes resides in the finding of MB as the only pathological findings in autopsies of subjects died for sudden cardiac arrest during sports [19,20]. Functional significance of myocardial bridges in athletes subjected to intense athletic training, reaching very high heart rates, undergoing adrenergic stimulation and possible myocardial hypertrophy, is even more complex to be assessed. An increase in sympathetic drive during stress or exercise likely facilitates ischemia, since tachycardia leads to an increase of systolic-diastolic time ratio at the expense of diastolic flow. Increased contractility during stress further aggravates systolic (and diastolic) compression. Endothelial dysfunction and coronary artery spasm may also contribute to constriction of the tunneled segment [23]. Furthermore, in athletes, functional implications of anomalous coronary arteries need to be clearly defined during the pre-participation screening in order to establish eligibility/ disqualification decisions in competitions [24].

The purpose of this point of view article is to focus and discuss on which is the ideal and most effective diagnostic method to reveal ischemia in athletes with myocardial bridges. Since modern medicine needs to be personalized, it is conceivable that, even in this field, appropriate diagnostic approach might reside on the identification of the mechanism of ischemia in each specific subject. Therefore, diagnostic potential in the detection of ischemia of different tests is discussed along the mechanism of ischemia that each of them is able to explore.

Mechanisms of Ischemia and Diagnostic Tests

Functional significance of myocardial bridges depends upon anatomical characteristics of myocardial bridges, namely the length and location of overlaying muscle, depth of the vessel and hypertrophy of the wall. Atherosclerosis of arterial wall proximal to the bridged coronary segment might also influence flow dynamic. Vasoconstriction and platelet aggregation might further reduce flow. Hemodynamic parameters, such as increased heart rate and reduced blood pressure, might be responsible for induction of ischemia. Therefore, since several pathophysiological mechanisms might be responsible for ischemia in myocardial bridges, we propose that diagnostic tests should be selected, according to the postulated mechanism of ischemia, based on the anatomical characteristics of the bridges and the functional status of the subject.

A. Coronary Diameter Reduction: Coronary angiography is an invasive diagnostic technique able to identify myocardial bridges based on the typical “milking effect” and a “step down – step up” phenomenon induced by systolic compression of the tunneled segment. Angiography is also able to diagnose the presence of atherosclerotic plaque formation, frequently involving the segment proximal to the bridge, with the tunneled segment typically spared. When bridges are diagnosed by invasive methods, morphological features can be visualized by intravascular ultrasound (IVUS), while functional characteristics can be measured by intracoronary Doppler ultrasound (ICD) and intracoronary pressure device [12]. IVUS analysis is able to show half-moon effect at rest or after provocation test, although its anatomical and physiological meaning are still not understood. Analysis of lumen area during the entire cardiac cycle can also be used to quantify the delay in relaxation after systolic compression. In ICD studies, flow pattern shows a sharp acceleration of flow in early diastole followed by immediate deceleration with a mid-diastolic plateau, as explained by an increased pressure gradient in early diastole, as a result of reduced distal coronary resistance. Occasionally, particularly in deep myocardial bridges, end-systolic flow reversal may precede rapid diastolic forward flow, as a result of local increase in pressure above aortic driving pressure [23].

Since vascular compression seems to be the major pathophysiological mechanism producing ischemia in subjects with myocardial bridge, dobutamine stress test might be proposed as the ideal test in such conditions, given the increased inotropic force produced by the drug. And in fact, a marked increase in flow velocity and an abnormal diastolic fractional flow reserve during dobutamine challenge has been demonstrated in symptomatic patients with focal wall motion abnormality upon exercise echocardiography [17]. Escaned, et al. [10] confirmed that inotropic stimulation is able to reveal the angiographic and functional severity of myocardial bridges, throughout the development of significant diastolic pressure gradients. Diastolic fractional flow reserve demonstrated to be superior to conventional fractional flow reserve, due to the exclusion for systolic pressure gradient. When dobutamine challenge is applied in the functional evaluation of myocardial bridges in athletes, chronotropic and inotropic response to dobutamine stimulation might be blunted due to betareceptor downregulation and/or desensitization typical of highly trained athletes [25]. Thus, dobutamine test, does not appear to be ideal stress test in athletes.

C. Reduced Coronary Flow Reserve: Distally to a bridged myocardium, myocardial blood flow at rest is normal and vasodilator stress does not produce reduced myocardial perfusion. In patients studied by 15-oxygen water positron emission tomography, myocardial stress perfusion distal to myocardial bridging was comparable with remote control regions, with no differences in relation to systolic compression [25]. However, in other studies, perfusion imaging with Thallium-201 or Tc-99m SPECT with dipyridamole, demonstrated perfusion defect during stress [26,27]. The difference between the negative and positive studies resides in the percentage of myocardial bridge compression observed in study population. A threshold of 50 to 70% of systolic compression seems to be required to induce myocardial perfusion defect.

D. Effect of Exercise: Exercise stress test is the most physiological method to assess ischemia, particularly in athletes, in whom the effect of training on cardiac function and flow needs to be assessed. In a series of athletes with myocardial bridges, exercise electrocardiogram appeared to be pathological demonstrating the presence of ischemia in such group of highly trained subjects [28]. If cardiac imaging is combined with exercise test, the diagnostic power of the test is significantly increased [29]. In fact, Italian guideline, state that in case of exercise ECG positive or nondiagnostic for ischemia, athletes should undergo exercise imaging test to verify the presence and extent of ischemia. Cardiac SPECT imaging studies can be effective for assessing ischemia in patients with angina and myocardial bridging. The evaluation of myocardial perfusion with dipyridamole SPECT imaging showed a good agreement with exercise stress SPECT imaging for the detection of ischemia in this group of patients [27].

Based on the anatomical and functional characteristics of the bridges and on the clinical presentation of patients, ischemic potential of MB con be evaluated by personalized test approach. However, in athletes, particularly if clearance for competition needs to be released, exercise stress test with an associated imaging modality seems to be the ideal and most appropriate test.

The author has no conflict of interest to declare and no fund were utilized for this work.

How to Assess Functional Significance of Myocardial Bridges in Athletes: A Personalized Medicine Approach

Myocardial bridging is a congenital coronary anomaly involving a segment of coronary artery coursing through myocardial wall, in a different depth and length, potentially affected by systolic compression. In athletes, such coronary anomaly is most often an incidental finding, due to increased use of high sensitivity noninvasive diagnostic tests. However, since myocardial bridge might potentially precipitate ischemia and even be responsible for sudden cardiac death, athletes need to be cleared for competition by an appropriate diagnostic test. Which is the ideal diagnostic test in such peculiar condition, in which the pathophysiological mechanism of ischemia is unknown and potentially different in different subjects, remains to be investigated. We focused on different diagnostic tests proposed and classified according to the most likely pathophysiological mechanism of ischemia in myocardial bridge. Accordingly, we analysed and discussed on ideal test in athletes with such condition.