Adsorption and Decomposition of Chemical Warfare Agents by Metal-Organic Framework

As a result of their toxic effects; chemical substances that have properties such as killing, injuring or disabling basic life functions are generally called chemical warfare agents. The Chemical Weapons Convention, signed in 1993, defined the devices and ammunition required to spread chemical warfare agents, and any specially designed equipment for their use, as chemical weapons. These weapons are; in addition to killing people, used for purposes such as making food stocks unusable with contamination, rendering high economic value targets inoperable, making military and civilian personnel use protective clothing and tools, reducing their mobility and referring military units to undesirable directions [1]. The situation that occurs with the use of chemical weapons against enemy countries in the field of war is called chemical warfare. The earliest examples of chemical warfare took place on the stone age (10,000 B.C). The warriors living in South Africa in those years produced poisonous arrows using the poisons they obtained from scorpions, snakes and plants. In 2000 B.C., soldiers in India made a fire on the battlefield and used the fumes as a weapon against their enemies. When the Chinese inscriptions from the 7th century B.C. are examined, it is seen that the plants that emit smoke are listed and how to use them. In 600 B.C., the Assyrians excelled by contaminating their enemies’ water sources with poisonous mushrooms. The Spartans placed a mixture of coal, sulfur and pitch in a wooden barrel and burned it and sent the fumes to the enemy defense lines with the blowers. In the 4th century B.C., the Chinese burned mustard and other poisonous plants in large pits and neutralized their enemies with the poisonous smoke coming out of it. Chemical agents in the modern sense were used for the first time in the First World War. For this reason, the First World War is called “The War of the Chemists”. Chlorine gas, which has an unpleasant smell and greenish yellow color, is the first chemical agent used in World War I. With the end of the First World War, many countries tried to ban chemical warfare by preventing the production and use of chemical warfare agents.

For this purpose, the Geneva protocol was signed in 1925 with the approval of 16 countries. The Geneva protocol is committed to not using chemical weapons in war. However, there is no article in the protocol that prohibits the production, transfer or storage of chemical weapons. Until the mid-1930s, phosgene and mustard were considered the most dangerous chemical warfare agents. This situation ended with the discovery of nerve agents. When trying to develop insecticide in the laboratory, tabun gas was isolated by chance. Then, tests were carried out on experimental animals using tabun gas. As a result of the studies, it was determined that the experimental animals died approximately 20 minutes after exposure to tabun gas [2]. Different criteria can be considered when classifying chemical warfare agents. Considering their mechanism of action and usage patterns, the most important criteria are physical state, toxicological feature and volatility. The classification of chemical warfare agents according to their toxicological properties is as follows; nerve agents, choking agents, blood poisoning agents, blister agents and non-lethal chemical agents.

The discovery of nerve agents is based on studies to develop more effective pesticides. Pesticides are chemicals used to destroy pests and microorganisms that damage the plant [3-5]. Molecular structures of both insecticides and nerve agents are based on organophosphorus compounds [5]. Organophosphorus compounds show their effects in the body by blocking nerve conduction. These compounds are generally esters, amides and derivatives of phosphoric acid in their structure. Organophosphates have lipid solubility [6]. Therefore, they are taken into the body by the skin, mucosa, conjunctiv and respiratory tract. They are also used as a chemical agent or drug in animal and human medicine as a chemical warfare agent in nervous system studies and military purposes [7]. This group of chemicals is most commonly used in pesticides, insecticides, acaricides, etc. They are used commercially and can be easily obtained commercially [4,8].

The general chemical structures of organophosphorus compounds are as follows; The center of the molecule has a phosphate atom and the phosphate atom can double bond with oxygen or sulfur. R1-R2 in the general chemical structure represents hydrogen, alkyl (including cyclic structure), aryl, alkoxy, alkylthiole and amino groups [3,9]. X represents halogens, cyano and thiol groups and inorganic-organic acids. The general chemical structure of organophosphorus compounds is as shown in Figure 1 of organophosphorus compounds. The organophosphorous compounds show their effect on the body through the inhibition of the enzyme acetylcholine esterase. OPCs are hydrolyzed by the enzyme by binding to the serine amino acid present in the active site of the AChE (Acetylcholinesterase) enzyme. Thus, the active site of the enzyme is phosphorylated [10]. The reaction between the AChE enzyme and the OPCs takes place in two steps. First, a reversible enzyme-inhibitor complex is formed. 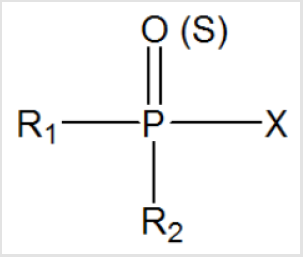 The rate of formation of this complex depends on the structure of the organophosphorous compound, the molecular size and the alkyl groups. After formation of the recycle complex, the substitution of the alkyl group in the structure with -OH results in a non-irreversible complex. This event is called aging and shown in Figure 2 [11-13]. One of the most commonly used methods for neutralizing nerve agents is the removal of the R-X bond [14,15]. Organophosphorus compounds can be directly hydrolyzed with water. However, this process is slow and takes a long time [16]. In order for the nerve agents to decomposition effectively, they must first be held by the adsorbing materials developed. Metal organic frames perform perfectly for adsorption of nerve agents and toxic chemicals thanks to their porous structure [17]. The metal organic frame is a new type of material with a porous structure, a high surface area, and inorganic cores connected by organic networks [18].

Adsorption and Decomposition of Chemical Warfare Agents by Metal-Organic Framework