The marine medaka, Oryzias dancena is a euryhaline teleost that can live in both freshwater and seawater [1]. It spawns 60 days after hatching, with a consequently short interval between generations [2,3]. Accordingly, the species has drawn attention as an experimental animal in aquaculture. The marine medaka is more tolerant of hyperosmotic environments than is the Japanese medaka, O. latipes, with higher survival rates in the adult fish and greater hatching rates in the oosperm [3-6]. That is, most of its physiological attributes are similar across a wide spectrum of salinities, ranging from fresh water to normal seawater [4-6]. Therefore, much attention has been directed at extending the utility of functional transgenic marine medaka strains for ornamental purposes, because they can be used at most naturally occurring salinities [7]. Recently, marine medaka has been in the spotlight as an experimental fish of transgenic fish research [7-10]. However, the practical application of transgenic fish has raised public and scientific concern about the ecological risks involved, especially those associated with the adverse consequences for natural gene pools, which can be genetically contaminated if unwanted transgenic animals are released [11]. For these reasons, much recent scientific research has focused on risk assessment in relation to transgenic fish, with particular emphasis on the reproductive confinement of transgenic stocks [12]. Triploidization involving blocking of the second meiotic division has been proposed as one approach to the generation of transgenic fish having depressed reproductive capacities [8-10,13].

The ability to effectively manipulate ploidy through the application of suitable shocks (temperature, pressure, or chemical) early in egg development requires the empirical determination of the magnitude, duration, and time that the shock should be applied [8-10,14,15]. The genetic material of a gynogenetic haploid organism can be doubled by controlling the second meiotic division and the first cleavage. The second meiotic division can be controlled by water temperature, hydrostatic pressure, or chemical treatment, which can also be used to induce triploidy [15,16]. The first cleavage can be controlled by heat shock or hypostatic pressure, which are also used individually or sequentially to induce tetraploidy [17- 20].

The effectively controlled release of the second ootid and the first cleavage are dependent on the type, intensity, and duration of the treatment [21-23]. The method of controlling the first cleavage as a means of chromosomal engineering can also enhance shortterm production in aquaculture [14]. It also has an application in the induction of tetraploidy, mitotic gynogenetic diploidy, or androgenetic diploidy using chromosomal engineering. To effectively control the first cleavage, an understanding of its temperature dependence is essential [14,24]. However, determination of mitotic interval is necessary for producing triploid and tetraploid. The Dettlaff unit (mitotic interval, 0) is the duration (in minute) of one mitotic cycle during the early synchronous embryonic cleavage or the interval between two consecutive cell divisions [18,20,25,26]. When measured over a range of water temperatures, the relationship between 0 and water temperature, as determined by regression analysis, can showthe developmental events that are influenced by temperature within a species and between species with a similar spawning biology [18,20,27].

The experimental group of diploid marine medaka, Oryzias dancena used in this study was reared according to the methods of the previous study [37]. Fish with a standard length of over 25 mm were used in this experiment; 35 males and 15 females were placed in each of two aquariums, and 2,000 fertilized eggs were collected immediately by net. The fertilized eggs of the experimental group (n = 100) were reared in a 100 L glass aquarium. To assess the temperature-salinity dependence of the first cleavage and 0, the water temperature was maintained in temperature-controlled water baths at 18, 22, 26, 30, or 34°C, and each experimental group was subjected to one of four salinities, 0, 10, 20, or 30 ppt NaCl. The water salinity of each group was regulated to remain constant throughout the experiment. Samples were generally taken at 5-minute intervals and fixed with 5% neutral formalin solution (50 mL formalin, 3.25 g Na2HPO4·12H2O, 2.25 g KH2PO4, 950 mL distilled water) at 4°C before observation. We measured the diameter of 10 fertilized eggs at a magnification of 50 under an optical microscope (Axiostar plus, Zeiss, Germany) equipped with a microscope camera (Axiocam MR, Zeiss). A specific developmental stage was considered to be reached when approximately 80% of the developing embryos were at that stage. In this study, all experiments were performed in triplicate.

The time of the appearance of the first cleavage furrow was recorded and was deemed to be the start of the subsequent cell division. The times at which approximately 10% of the developing embryos reached the two-cell (I; Figure 1a) and eight-cell (III; Figure 1b) stages were recorded. The value of 10% was selected according to the recommendation of the previous study [38]. The mean 0 value was calculated as 0 = (III – I)/2. The relationship between the mean 0 and the water temperature was examined by simple linear regression line. One-way and two-way ANOVA analysis were applied to determine water temperature and salinity effects. Duncun’s multiple range test was applied when significant difference was observed. 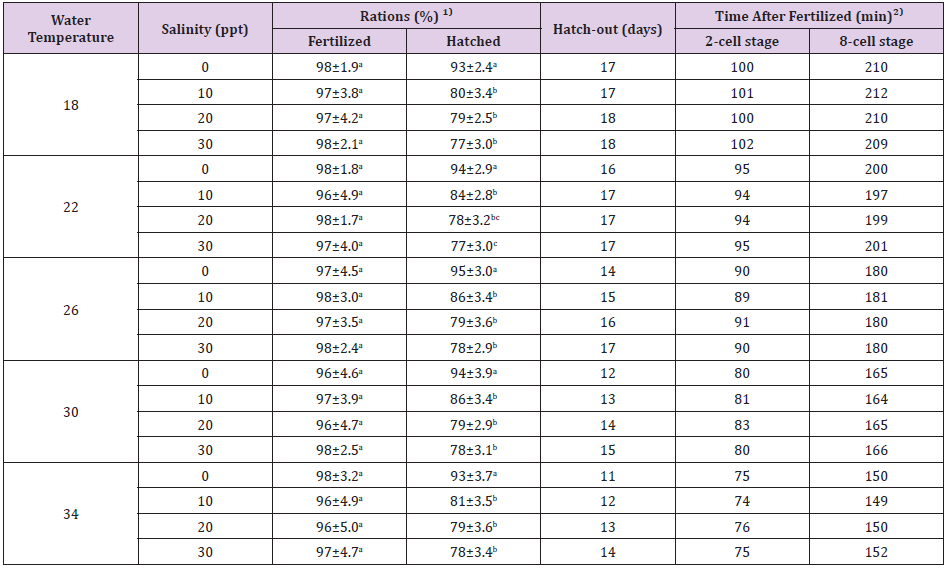 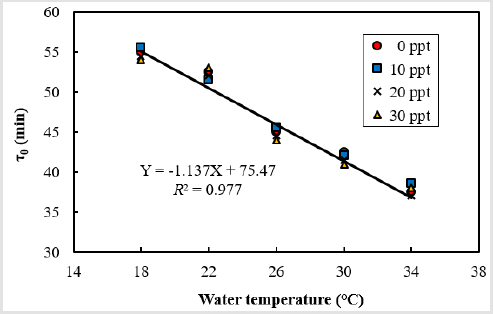 Figure 2: Mitotic intervals (τ0, Y) for marine medaka, Oryzias dancena as functions of temperature (X). Temperatures used are within the normal range for spawning and early, development in this species. Eggs from three females to were fertilized with pooled sperm from one male and were distributed between the temperature treatments and the salinity treatments. The experiments were executed three times. 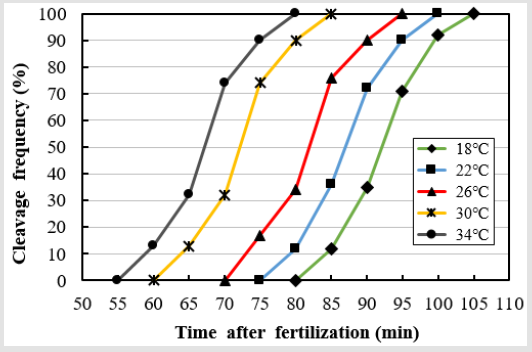 We also attempted to determine the water temperature-salinity dependence of the cleavage rates and 0 and found that the marine medaka eggs underwent cleavage within a temperature range of 18-34°C and a salinity range of 0-30 ppt NaCl. We found that the marine medaka eggs showed faster development with increasing water temperatures and water salinity, whereas 0 decreased with increasing water temperatures, which indicates a strong negative correlation between 0 and water temperature. Although 0 and hatching time after fertilization differed greatly from those of other species, the trend in the water temperature dependence of 0 for the marine medaka is similar to that in the black plaice, Pleuronectes obscurus; winter flounder, Pseudopleuronectes americanus; far eastern catfish, Silurus asotus; greenling, Hexagrammos otakii; Baltic herring, Clupea harengus membras; perch, Perca fluviatilis; ruffe, Gymnocephalus cernuus; Korean rose bitterling, Rhodeus uyekii; Korean bullhead, Pseudobagrus fulvidraco; grass puffer, Takifugu niphobles [18,20,25,32-36,39].

The relationship between 0 and water temperature in fish is typically curvilinear, when the temperatures are within the range in which the fish species naturally spawn and develop [18,20,25,32- 35,39]. The linear response we observed in this study for 0 against water temperature is consistent with studies of developmental rates in the black carp, the winter flounder, and the black plaice [18,20,29,33,35]. However, additional observations are required. The available data suggest that the graphs of the dependence of 0 on the water temperature are highly species specific. Therefore, the species specificity of the developmental rate can be used to identify the taxonomic ranges of different fish species. We searched the previous study for determining the relationship between 0 and the water salinity. Unfortunately, no previous studies have reported such a relationship between 0 and the water salinity. That’s because 0 of several species (having a wide spectrum of salinities) have not been researched so far. So, the future investigation of species having a wide spectrum of salinities needs to focus on the relationship between development and water salinity. The results of this study and an investigation of seeding production techniques based on artificial fertilization, the induction of triploidy to produce sterile organisms, and the induction of tetraploidy, mitotic gynogenetic diploidy, and androgenetic diploidy in the marine medaka will facilitate such research in the future as well.

Considering the identity of the mitotic events and the short time intervals of mitotic intervals (0), chromosomal manipulation in marine medaka, Oryzias dancena would be the most effective at 0 ppt salinity and water temperatures between 26 and 30°C. This study has demonstrated the specific and clear differences in the rates of hatching, the time of the first cleavage, τ0, and hatching time at different water temperatures and different salinities in the marine medaka. These data will be useful for the development of an optimal treatment protocol for its chromosomal manipulation. These data on eggs development will make a valuable contribution to a biological aquaculture database.

The experiments performed in this study complied with the current laws of Korea (Ordinance of Agriculture, Food and Fisheries, No. 1 - the law regarding experimental animals, No. 9982) and the Ethical Guidelines of Korea Maritime & Ocean University, Korea.

I am grateful to the staff of the Fishery Genetics and Breeding Sciences Laboratory of the Korea Maritime & Ocean University, Korea. The author would like to thank anonymous reviewers for their helpful suggestions that improved the quality of this paper.

The author has no financial or personal conflicts of interests.