The first subperiosteal implant was introduced by Dahl in the beginning of the 1940s. It was placed on the jawbone without any fixation. Short description of this procedure: gum tissue was opened and bone surface was revealed to have an impression created. This impression was used to make a gypsum cast that helped design and create the implant framework with precision technologies from a nickel-cobalt-chrome alloy. Afterwards, gum tissue was opened again so the finished frame structure could be fitted to the bone. Then, the wound was closed . Dahl’s method had some disadvantages such as the need of more surgical procedures. Because of this, the method was not used for quite a while [1]. Insertion of dental implants to treat edentulous patients has become a routine procedure over the years [2]. Retention plays an important role when using dental implants. Besides, it is important to mention that implants should not be subjected to high mechanical load [3].

Osseointegration takes place between dental implants and bone tissue, which leads to occlusal loads in the bone. Neighbouring bone tissue around the implant can be highly deformed due to mechanical overload. This case, deformation and stress gradients may exceed biological limits of bone tissue which will lead to micro fractures at the implant-bone interface. Micro fractures can cause implant fracture or bone resorption [4,5]. Invention of CADCAM systems makes pre-surgery design possible, during which a custom-made implant can be created. Design steps of custom-made implants that meet patient-specific requirements are the following: - 2D CT images are converted to 3D DICOM files – use of 3D software for virtual design – 3D Stereolithography (STL) of the implant specimen using 3D printer. [6] During Additive Manufacturing (AM) – or 3D printing in common language – three-dimensional model data is used to create objects with the desired geometry that are built up layer-by-layer [7].

In recent years, numerous studies have been published about the use of additive manufacturing technologies in many fields of medicine [8-11]. The most widespread materials for dental and orthopaedic implants are titanium and titanium alloys, because they can integrate into bone tissue [12-15]. Use of the first titanium implants were documented by Branemark in 1977. Osseointegration after insertion was successful. Titanium and titanium alloys have outstanding biocompatibility, low electric conductivity, good corrosion resistance, and high thermodynamic stability [16]. Behaviour of endosteal implants can be investigated with numeric methods. In recent years, finite element method [17] has been utilized to model peri-implant deformation and stress distribution [18-21], mechanical load direction and magnitude [22,23], and mechanical properties of bone [24,25]. Structural analysis in Finite Element Method (FEM) can define stresses and deformations by considering external forces, loads, pressure, temperature change, and other factors [26].

Properties of the Chosen Material

The most widely used titanium alloy for dental implants, prostheses, and other medical devices is Ti-6Al-4V. We used Grade 23 titanium powder for the additive manufacturing of our implants. This material has outstanding corrosion resistance and biocompatibility. LPW Technology Ltd. was the supplier of the metal powder. Table 1 shows the chemical composition of this Ti- 6Al-4V alloy in mass percent. 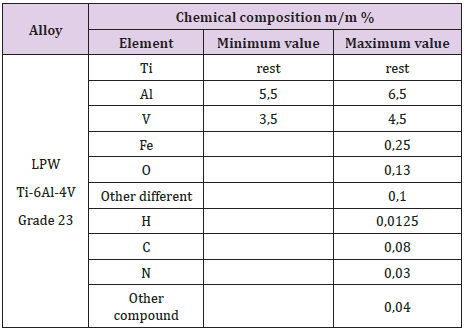 Additive manufacturing was completed with LMF (Laser Metal Fusion) as our generic technology. With additive manufacturing, complex internal geometries can be created, and the workpiece is built up layer-by-layer. Our 3D printer was a Mysint 100 unit, which uses laser beam melting. Printing was partitioned into three major steps: the first was preparation during which three-dimensional models were created and then transformed to STL (Triangulated Surface Data) files. In the second stage, 3D printing was performed before which printing unit parameters were adjusted. The third and last step was post-processing where the specimens were removed from the building platform and their surface was finely machined.

Subperiosteal implant design started with the processing of CBCT images. Figure 1 shows STL files of the patient’s mandibula, which is the lower jawbone. Figure 2 shows STL file of the patient’s maxilla, which is the upper jawbone. Figure 3 shows the result of virtual planning with the maxilla, mandibula, the designed implant, and denture. The final subperiosteal implant was designed based on CBCT images. Mechanical aspects were also considered in the design process of the titanium framework. Figure 4 shows the STL file of our titanium implant design with its three-dimensional geometry that had been analysed with finite element method. 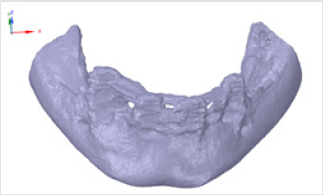 Figure 1: STL file of the mandibula. 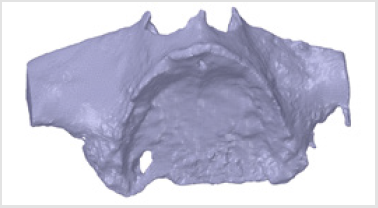 Figure 2: STL file of the maxilla. 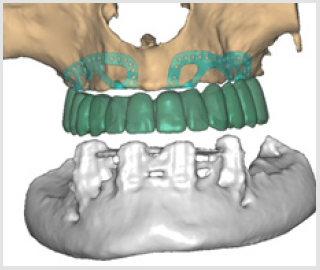 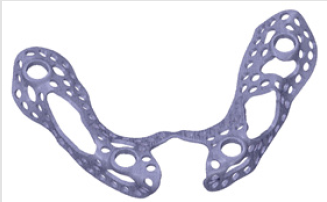 Forces had four points of application on the implant, because dentures were connected to those sites. There were 4 parts between the implant and the denture. 3D models of these connecting components and their assembled state is visible in Figure 5 Component no. 1 was a threaded sleeve that was connected to the baseplate with a welded joint. Component no. 2 was the abutment that had a dual threaded connection with a conical part, which contained a hexagonal fitting geometry for assembly. The height of its lateral wall compensated the necessary gum tissue thickness. This surface was the most crucial part of the system, because it provided epithelial tissue adhesion and bacterial isolation between the oral cavity and tissues. Component no. 3 was the bonded interface containing the base for screw fixation to which the crown was fixed. Part no. 4 was a fixing screw with hexagonal connection. Figure 6 shows our tested implant with occlusal forces and fixation support areas. A sleeve was welded into the implant and the abutment was inserted inside. Fix constraints were chosen because the implant could not move on the bone tissue.

Figure 6: Titanium framework with its constraints and acting forces.

Distant forces were used as they would normally act on the implant from the dental crown. We used data obtained from scientific literature according to which magnitude occlusal forces can be between 100 and 800 N. In the first analysis, maximum 800 N occlusal force was defined. Its result is presented in Figure 7 It is notable that stresses only raised at the acting point of the force. Stress intensity was 287.28 MPa for maximum occlusal load. Another scenario was also investigated in which the frontal part of the implant was loaded with the lowest, while the back of the implant was loaded with the highest occlusal forces. Figure 8 presents the results of this loading scenario with the maximum stress level of 207.6 MPa. It is notable in this case that highest stresses raised at the back of the implant at the acting points of the forces. Different force variations were all analysed from minimum to maximum loads. Figure 9 shows the set of completely linear results. Highest stress intensity was 287.28 MPa for maximum occlusal forces. The studied implant was inserted after manufacturing. Implant fitting to the bone ridge of the patient can be seen in Figure 10.

Figure 8: Result from the change in occlusal force. 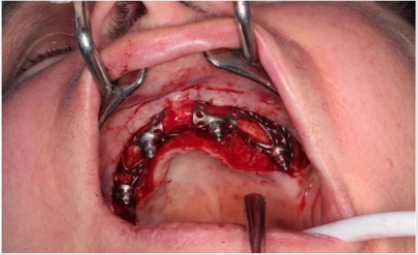 In our mechanical analyses, the highest stress intensity was 278.28 MPa for maximum occlusal load. Yield strength of Grade 23 Ti-6Al-4V alloy is 760MPa, which means if we calculate maximum permissible stress with the safety factor of 2, the structure will still be safe. Volume reduction was successful. Consequently, the mass of implanted titanium alloy was reduced in the patient. Further studies will be conducted to further decrease the amount of titanium material.

We would like to express our special thanks to Lajos Bozsányi, a dental technician, CAD and custom-made dental prosthesis designer at Dent-Art-Technik Ltd. “EFOP-3.6.1-16-2016-00017 Internationalization, initiatives to establish a new source of researchers and graduates, and development of knowledge and technological transfer as instruments of intelligent specializations at Szechenyi University”.