According to the edition of International Diabetes Federation Atlas in 2009, the estimated diabetes prevalence for 2010 had risen to 285 million, representing 6.6% of the world’s adult population, with a prediction that by 2030 the number of people with diabetes in the world will have risen to 438 million1, with the majority of the new diabetic population coming from Asia. Diabetes-induced vascular dysfunction and pathologies are the major causes of morbidity and mortality in diabetic patients. Diabetic complications are a result of interactions among systemic metabolic changes, such as hyperglycemia, differential local tissue responses to toxic metabolites of glucose metabolism, and genetic and epigenetic modulators. Factors such as Vascular Endothelial Growth Factor (VEGF) seem to get involved in the above process.

In humans, there are five secreted glycoproteins that make up the VEGF family member: VEGF-A, VEGF-B, VEGF-C, VEGF-D and Placental Growth Factor (PlGF). VEGF-E is encoded by certain viruses and its gene is not contained within the human genome. Native VEGF is a basic, heparin-binding homodimeric glycoprotein of 45 kDa. The most extensively studied of these family members is VEGF-A and if a person is referring generally to “VEGF” they are typically referring to VEGF-A. It is an important signaling protein mainly involved in angiogenesis. It also plays an important role in bone formation, wound healing, hematopoiesis and development. VEGF acts in a different way depending on the target. For example, it is produced by carcinoma cells, acts through paracrine signaling on endothelial cells and through autocrine signaling on carcinoma cells. Evidence shows that autocrine VEGF is involved in two major aspects of invasive carcinoma: survival and migration.

Moreover, it was shown that tumor progression selects for cells that are VEGF-dependent, challenging the belief that VEGF’s role in cancer is limited to angiogenesis [1,2]. At the turn of this millennium, the role of Vascular Endothelial Growth Factor (VEGF) in the diabetic kidney seemed like it was going to be straightforward. VEGF was “up” in diabetic rats and blockade of its actions attenuated albuminuria: VEGF was “bad” in diabetic nephropathy. Since that time, our understanding of the complex paracrine signaling cascades that are mediated by the VEGF family has expanded. It has become apparent that it is not simply the amount of “VEGF” that is important, but also the type of VEGF, the sites of VEGF action and the context inwhich VEGF-mediated signaling occurs. These advances have provided a gold-standard framework against which our knowledge of the actions of other regulators of cellular function in the diabetic kidney can be compared.

FENESTRATIONS ARE THE DEFINING characteristic of the Glomerular Endothelial Cell (GEnC) both morphologically and functionally. Endothelial fenestrations can be grouped into three types according to type of endothelium and presence or absence of diaphragms (Table 1). It has been observed that high levels of VEGF expression are found in epithelial cells closely associated with fenestrated endothelia. The above notice led to the hypothesis that VEGF induces endothelial fenestrations. The proposed pathway is shown in (Figure 1). It seems that there is a primary role for VEGF in maintenance of fenestrations as well as in their biogenesis. However, the question of whether GEnC fenestrations are dynamic structures is at present totally unexplored. The reduction in GFR associated with loss of fenestral area predicted by biophysical models does indeed occur in preeclampsia where there is good evidence that this is the mechanism of acute renal failure [3]. In this condition, increased circulating levels of soluble VEGFR1 bind to podocyte-produced VEGF and reduce availability for endothelial signaling [4]. This results in endothelial thickening and a reduction inboth size and density of fenestrations, “endotheliosis.” GFR recovers as the condition resolves and fenestrations reappear.

Table 1: Comparison of the three types of endothelial cell fenestrations. 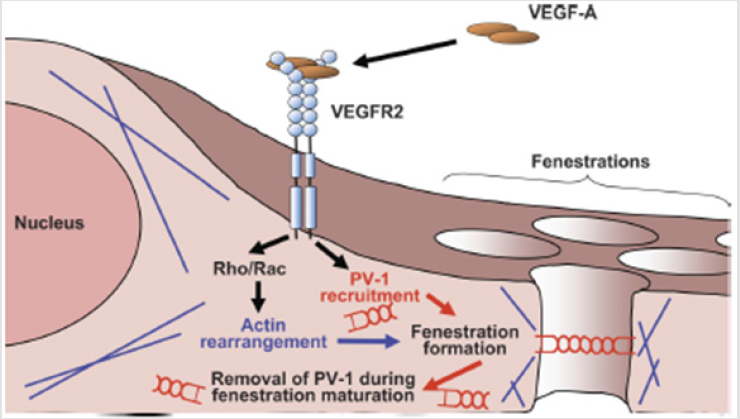 Increased concentration of VEGF-A has been reported in the ocular fluids [4] and retinal tissues [5-8] of diabetic patients and is associated with the severity of Proliferative Dr (PDR). Anti- VEGF treatment, including intravitreal injection, can inhibit the progression of PDR8. However, it is likely that retinal VEGF levels are initially elevated as a result of a reaction against retinal hypoxia or ischemia in diabetes to maintain endothelial function and circulation, as a result of pericytes loss and acellular capillaries. This increase in VEGF is probably a tissue response to increase survival. Thus, the use of chronic anti-VEGF therapies might have beneficial effects on the vasculature in the short-term. Clinically, the loss of VEGF without good glycemic control or a decrease of metabolic demands, as by photocoagulation, might cause complications in the neural retina (Figure 2). 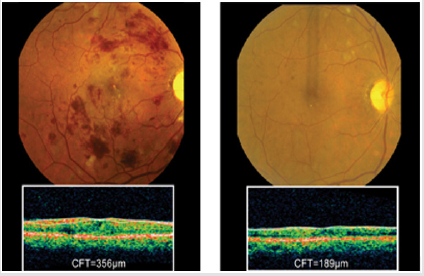 VEGF includes a family of growth factors that act on endothelial cells regulated by hypoxia and promote angiogenesis, increase permeability in vasculature, and is also known as a major regulator of endothelial proliferation, migration, and survival [9]. What is the physiological role of VEGF-A in the kidney, especially glomeruli? It is reported that treatment with anti-VEGF antibodies to patients with cancers [10] or within patients with preeclampasia [11] causes proteinuria and endothelial damage, suggesting that VEGF-A plays an important role in maintaining endothelial cell function and the glomerular filtration barrier. Supporting this, detailed reports by Quaggin et al. clearly show that VEGF-A is necessary for forming and maintaining the glomerular filtration barrier [12,13].

Is VEGF-A a bad or Good Player for The Progression of Diabetic Nephropathy?

Although VEGF expression of glomeruli is upregulated during all stages (mild, moderate and severe) of nephropathy, VEGF bioactivity in endothelial cells is only increased in mildly injured glomeruli and decreased in moderate or severe lesions. Glomerular capillary rarefaction is linked to the degree of glomerulosclerosis and endothelial cell proliferation, showing capillary repair is markedly increased only in mildly/moderately injured glomeruli, even if apoptosis is detected in all stages. Diabetic nephropathy is associated with glomerular capillary rarefaction by an imbalance of endothelial cell proliferation, repair and apoptosis, and injury; and reduced VEGF activity might be an indicator of an insufficient capillary repair reaction [14]. Therefore, if increased VEGF expression occurs as a reaction of compensation for the damage of glomerular endothelial cells, inhibition of VEGF should not be given as a treatment for diabetic nephropathy. However, further studies are needed to conclude whether VEGF-A is or is not an endogenous protective factor for diabetic nephropathy.

According to the edition of International Diabetes Federation Atlas in 2009, the estimated diabetes prevalence for 2010 had risen to 285 million, representing 6.6% of the world’s adult population, with a prediction that by 2030 the number of people with diabetes in the world will have risen to 438 million1, with the majority of the new diabetic population coming from Asia.