Individual coefficient of variation in serum cholesterol values has been reported to be 5-10 % [1]. Sometimes this variation can be higher, especially in East Finland between June1956 and January 1957 [2]. Role of environmental factors is discussed. Inflammation can elevate serum cholesterol and apoB/apoA ratio [3]. TNF-alpha and IL-6 are reported to increase cholesterol synthesis many-fold via elevation activity of HMG-CoA reductase [4]. ACE inhibitors, as well as AT and Ca blockers can have anti-inflammatory abilities [5]. Concluded by its chemical characteristic’s silicon has been included in antioxidants [6]. Milk content of water-soluble [6] silicon was two-fold (0.81 ppm) in healthy contra mastitis cows (0.39 ppm) [7]. In serum the respective mean silicon values were 1.63 and 1.02 ppm [7]. PubMed search: “silicon anti-oxidant” gave 13 results, the first one from 2003 [8]. Google search: “silicon anti-oxidant plant” gave 2.8 million results [9]. Si has been reported to increase antioxidants and other phytochemicals in plants [10]. Normal P-Mg - in contrary to hypomagnesemia (P-Mg 0.48 mmol Mg/l) - can protect cardiac muscle against ATP reduction, lipid peroxidation and LDH (lactate dehydrogenase) release during affection by reactive oxygen species [11] - i.e. Mg can work like an “on-demand antioxidant”.

Mg deficiency can provoke inflammatory cytokine production [12]), which can increase cholesterol synthesis [4]. Keys, et al. [2] reported on serum cholesterol values in summer 1956 (Jun) and winter 1957 (Jan) from East and West (Finland) - in summer from 42 families and in winter from 20 families of both areas. In East the male values were: Jun 5.3 and Jan 7.9 (mean 6.6) mmol/l, in West respectively 5.8 and 6.1 (mean 5.9) mmol/l. (original values – mg/100ml – were measured as mm from [2], divided by molecular weight of cholesterol, 386.65, and multiplied by 10). The 50 % higher male winter cholesterol in East was suggested to be based on difference in climate and extreme mode of life [2]. (In West winter cholesterol was only ca 6 % higher than summer cholesterol). Lower eastern cholesterol in Jun (by women, too) was not discussed in [2]. Ratio saturated/unsaturated fatty acids (SFA/ PUFA) (in East 7.85 in Jun and in Jan 7.06) [13] nor cholesterogenic formula [14] (= 2 x g. SFA - g.PUFA) (for Jun was 105.8 and 105.0 for Jan) [13] do not explain the summer-winter difference in East. Anyhow mean of summer and winter “cholesterogenic formula” was somewhat higher in East as serum cholesterol. The solution can be in the differences inside the foodstuffs.

The fatty acids of butter were estimated by the analyses from 1944 [13]. Pellervo Saarinen, the first head director of Agricultural Research Center in Finland 1957-60, reported in 1956 that variation in the milk fat iodine number – a measure of unsaturation in fatty acids - was too high. It varied between 25-50, although the ideal value was 32-37. Below value 32 milk fat was too hard and poor in polyunsaturated fats (and vitamin E) and above 37 too soft. Special problem was the hard fat. By planned feed the iodine number of butters was possible to get to the level pretended [15] (Figure 1). According to Saarinen the iodine number of the fat in the fresh grass was about 100 and this was not much changed in silage, but in dry hay it is strongly decreasing during a few months and produces hard butter in winter. He suggested that the price of milk fat should be according its iodine number [15]. 1955-56 in West Finland (in surroundings of Turku, in Agricultural Society of Varsinais-Suomi) domestic fodder was supplemented by oil cakes 127kg/cow/a (ca 500 g per number of days of inside feeding, ca 240 days) and in the province of Kuopio respectively 50kg/cow/a (ca 200 g/d during inside feeding of 255 days) [16]. (Approximations by the author). 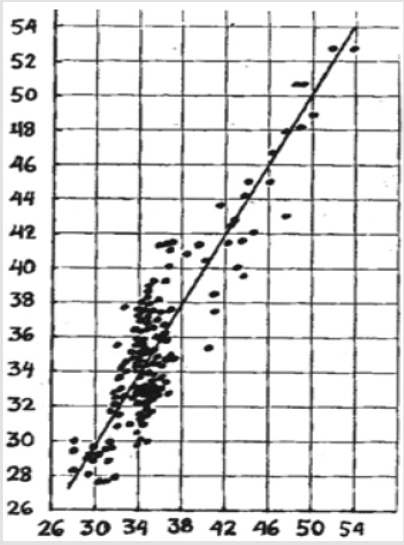 This could partially keep the winter values at high level. Weathering of Mg and Si from soil silicate matrix, which occurs e.g. via fungal and bacterial assistance [17,18], is temperature dependent and starts somewhat later than K liberation [19]. This explains why generally Mg availability via grass is the lowest in the spring [20]. Additionally, temperature of May 1955 was 1-3 degrees lower to the average. Precipitation in June was unusually high in the Southwest Finland (Åland and Lapland) and less to average in other provinces [21]. Rainy weather can increase K contents and decrease Mg contents of plants [20]. High precipitation could dilute the weathered Mg and Si. So, in Jun 1955 the weather conditions could promote more Si and Mg access in East than in West. Less rain in East could be associated with higher amount of sunshine, synthesis of vitamin D and possible anti-depressive effects, with possible metabolic effects. In June in 1956 the milk was obviously the only product of the new growing period consumed in remarkable quantity. (Grazing period in East begins in East at the first half of June, in West at the end of May). During July – October 2018 was analyzed a few milk samples of three areas of Finland by Eurofins Viljavuuspalvelu Oy, funded by the author. In them the range of acid soluble Si content was between 30 [22] and 270mg/kg [23].

The highest value was measured in July and the lowest in October. These values are about 100-fold to the values earlier published [7,24] - of the same magnitude with Mg (110g/kg) [24]. One-liter milk contained Si 1-10-fold to the total daily allowance (29mg), earlier estimated [24]. The cholesterogenic formula [14] did not explain eastern serum cholesterol variation in 1956-57. The analytical difference can be explained at least partly by the organic Si compounds, e.g. glycosaminoglycans, GAG’s, (mucopolysaccharides) [25], in which Si is not detected without pretreatment with strong acid or alkali [26]. Possibly Si contents of wheat in Australia 0.5-5.3mg/kg [27], which are 10-100-fold to the published Finnish values [24], were determined after acid pretreatment. GAG’s could as such work as antioxidants [28] and lubricants [29] in connective tissue of arterial walls and reduce inflammation and cholesterol synthesis. Pharmacokinetic studies performed on humans have revealed that GAG’s, at least chondroitin sulfate, can be absorbed orally [30]. Possibly higher grass Si content increased more antioxidants and other phytochemicals [10], including cholesterol-related dietary components [31], in the East Finland and affected on the serum cholesterol levels, too.

It seems possible that weather conditions, availability of Si, Mg, GAG’s and other organic phytochemicals could explain the higher serum cholesterol variation in East than in West Finland 1956-57. Dietary allowance of Si seems to be remarkably higher than earlier estimated by analyses on water-soluble Si. Further analyses on acid-soluble Si are suggested.

Individual coefficient of variation in serum cholesterol values has been reported to be 5-10 % [1]. Sometimes this variation can be higher, especially in East Finland between June1956 and January 1957 [2]. Role of environmental factors is discussed. Inflammation can elevate serum cholesterol and apoB/apoA ratio [3]. TNF-alpha and IL-6 are reported to increase cholesterol synthesis many-fold via elevation activity of HMG-CoA reductase [4]. ACE inhibitors, as well as AT and Ca blockers can have anti-inflammatory abilities [5]. Concluded by its chemical characteristic’s silicon has been included in antioxidants [6]. Milk content of water-soluble [6] silicon was two-fold (0.81 ppm) in healthy contra mastitis cows (0.39 ppm) [7].