Biomechanical Analysis of Obese and Non-Obese Children During the Gait

Obesity is defined as the excess of body fat. This definition may vary depending on the region however in Western countries such as U.S and in many European countries it is defined by body mass index (BMI). The BMI is calculated by dividing the weight over the square of height. If the BMI is higher than 30 kg/m2 that indicates the obesity. Under that range is classified as overweight, average weight and underweight depending on values. During the walking, foot contacts the ground and produce vertical ground reaction force that can reach 120% of body weight [1]. An individual that is 67kg, walking 1.6km, would absorb 64.5 tones on each foot [2,3]. Because of this forces that is being absorbed by each foot, discomfort, pain, and pathologies might occur. The pain and pathologies that individual faces might aggravate due to additional mechanical loading caused by their mass [4-7]. Each obese individual’s gait clinically assessed based on the detection of their performance of daily life routines especially locomotor movement [8]. The plantar pressure distribution is a clinical tool to understand physical and functional implications of obesity. The effect of body weight on the plantar pressure is not yet clear. So, biomechanical analysis of gait is necessary to recognize how obesity influences weight-support activities. Consequently, the aim of this study was to compare dynamic plantar distribution between obese and non-obese children.

In this study, 30 healthy male subjects were enrolled: 15 obese children, 15 non-obese children (Table 1). The mean age of the obese group was 9,8 years, and that of the non-obese group was 9,9 years. The obese group BMI was bigger than non-obese BMI. (Table 1) Obese children was significant than non-obese children in BMI. Plantar pressure data were collected from all subjects. A footscan® plate system (RsScan nv., 2m x 0.4m, 16384 sensors, 500 Hz, dynamic calibration with footscan® plate system) was mounted in the middle of an 8 m long track. The subjects walked barefoot at their own pace. All measurements were taken with the subjects walking barefoot over the plate. Three walks for each foot (three walks for each subject) were recorded and printed. Each print consisted of a time peak-pressure curve for ten regions of interest on the foot. The regions of interest, which were analyzed automatically by the system software, were lateral heel, medial heel, mid-foot, lateral (Metatarsal 5, Metatarsal 4), central (Metatarsal 3, Metatarsal 2, Metatarsal 1) and the toes 2-5, the toe 1(Figure1). The time variables were calculated as the ratio of time from the start of the stance to peak pressure under the region of interest and the total stance time. The pressure variables were calculated as the ratio of the peak pressure under the region of interest to the body weight (Figure 2). The parents signed a written informed consent, agreeing with their children’s participation in the study. 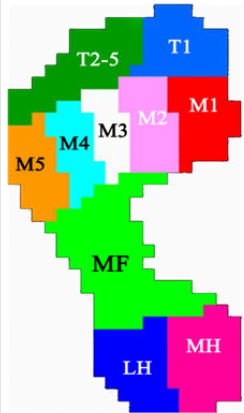 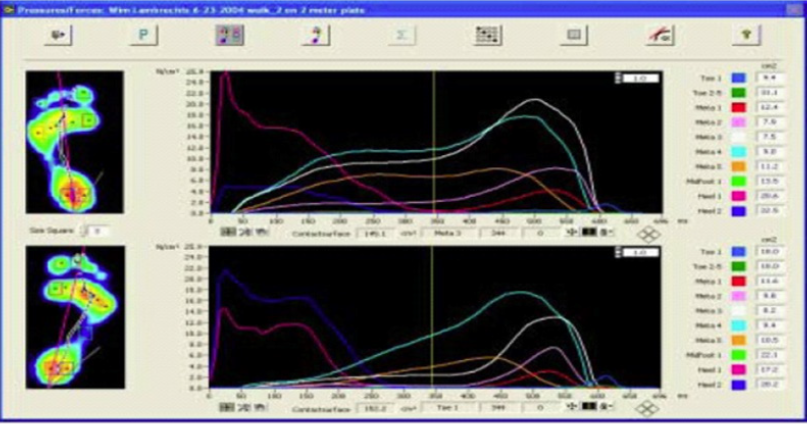 Means (SD) were calculated for different time and force variables. The differences within the groups and between the groups were compared using a one-way analysis of variance. Differences of p<0.05 were considered significant. 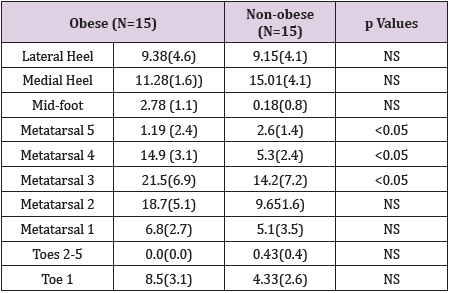 Obese children in the present study generated significantly higher mean peak pressures under the mid-foot and third to fifth metatarsal heads, compared to their non-obese counterparts. Because obese children have flatter feet this cause increasing in the mid-foot pressure. The mid-foot region contacts the pressure platform, generating pressure data on this foot area. The peak pressures generated by the obese children for Metatarsal 3, Metatarsal 4, and Metatarsal 5 were high relative to other foot regions, as well as being significantly higher than the plantar pressures generated by the non-obese children. As these higher pressures are being experienced on smaller bony and ligamentous structures surrounding the second to fifth metatarsal heads, this may have negative consequences for the feet of obese child in terms of an increased risk of forefoot pathologies.

Based on the findings of the present study, it is postulated that obese children might be at an increased risk of developing foot discomfort and/or foot pathologies, such as stress fractures in the forefoot. It is recommended that the effects of obesity on the structural and functional characteristics of children’s feet be further investigated.

The authors declared no potential conflicts of interest to this study.

Biomechanical Analysis of Obese and Non-Obese Children During the Gait