2Department of Orthopedic, Phramongkutklao Hospital and College of Medicine, Thailand

Osteoporosis is defined as a skeletal disorder characterized by compromised bone strength predisposing to an increased risk of fracture. Osteoporosis is a devastating disorder with significant physical, psychosocial, and financial consequences [1]. Generally, osteoporotic hip fracture occurring in elderly patient and this is mainly associated with low energy mechanism; fall from standing height [2-5]. The incidence of osteoporotic fracture has projected to increase in worldwide [6-8] and they are associated with morbidity and mortality [9-11]. So appropriate management for hip fracture is really important and it should be done by multidisciplinary team since patient admission until discharge including prevention for the second fracture. Management in hip fracture is mainly classified into non-surgical and surgical treatment. Nonsurgical management is only selected for some patients with severe comorbidities that they cannot tolerate to surgery. However, they tend to have severe complication from immobilization including pneumonia and death within a short period of time.
Therefore, surgery is considered as a first priority for management in patient sustained a hip fracture. Orthopedic surgeon should discuss the overall long-term prognosis of possible decreased mobility and independence as a result of the hip fracture including risk and benefits between nonsurgical and surgical treatment. Hip fracture management is generally divided into 3 stages: preoperative, intraoperative, and postoperative stages.

Physician should access whether patients take any anticoagulant or antiplatelet use and consider stopping them in elective surgery: American College of Chest Physician (ACCP) clinical practice guideline recommends stopping antiplatelet drugs for a minimum of five days before elective surgery [13]. Withholding warfarin and administration of oral or IV vitamin K is recommended if reversal of the anticoagulant effects of warfarin to permit earlier surgery is deemed appropriate (recommendation B; evidence level 1++ and level 3) [14, 15]. Low-dose vitamin K (1-2.5 mg) administered either intravenously or orally, partially reverses the anticoagulant effect of warfarin over 24 hours [15]. FFP should not be used when there was no contraindication for application of vitamin K. Furthermore, low molecular weight heparin (Fondaparinux) should not be used before surgery because of the increased potential for spinal hematoma after spinal or epidural anesthesia (recommendation A) [16].

A Cochrane review examined the use of traction (both skin and skeletal) applied to the injured leg from the time of admission until surgery. This practice is intended to relieve pain and make subsequent surgery easier. However, there was no evidence of any benefit in pain relief or fracture reduction from the routine use of preoperative traction in hip fracture patients [17]. Intravenous antibiotic prophylaxis should prescribe within 30 minutes before surgical incision in all patients with hip fracture. A meta-analysis found that compared to placebo, antibiotic prophylaxis significantly reduced the overall wound infection, deep wound and superficial wound infection after hip fracture fixation [18].

Surgical management in the femoral neck fracture is not similar to the intertrochanteric fracture.

Singh index was used for evaluating trabecular density in osteoporotic severity [19]. The higher trabecular loss is strongly correlated to higher rate of fixation failure (Figure 1). Surgical fixation for femoral neck fracture depends on degree of displacement. In nondisplaced fracture, dynamic hip screw with side plate is not superior outcome than cannulated screws [20] while there are several treatment options for displaced femoral neck fracture (internal fixation, hemiarthroplasty, and total hip arthroplasty) which depends on age group, bone quality, functional demand, cognitive state, and medical comorbidity (for instance cirrhosis, alcoholism, Parkinsonism) [21]. Internal fixation is usually appropriate in young age patients while old age with frailty patients should consider for arthroplasty. A randomized trial demonstrated both internal fixation (IF) and arthroplasty produce similar final outcomes, but IF has a marginally lower mortality at the expense of an increased re-operation rate [22,23]. Generally, patients with preexisting joint disease, medium/high activity levels and a reasonable life expectancy, should have THA rather than hemiarthroplasty as the primary treatment [23,24]. Conversely, displaced femoral neck fracture in relatively low functional demands and lack of preexisting hip arthritis should be suitable for hemiarthroplasty. Four good quality systematic reviews found no evidence of superiority of bipolar implants compared to unipolar prosthesis [23,25-27]. 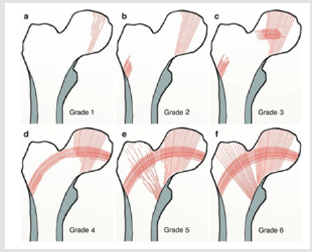 1. Hip dislocation can be avoided by external hip protector [30], extreme hip position precaution.
2. Fall prevention can be managed by ambulation with assistive device, hip-quadricep-calf strengthening exercise, evaluate for any associated factors to walking ability including visual problem, proprioceptive sensation, and environment at home.
3. Patients without a contraindication should receive thromboprophylaxis using Fondaparinux for 28 days starting six hours after surgery. Prolongation of thromboprophylaxis with fondaparinux for a further 19-23 days reduced the risk of thrombosis from 35% to 1.4% compared with placebo (Evidence level 1++) [31].
4. Mechanical prophylaxis should be considered in suitable patients to reduce the risk of DVT after hip fracture [16]. Cyclic sequential compression and arterial venous (A-V) foot impulse systems, reduced the risk of DVT by 69% compared to control.
5. Anti-osteoporotic drug should be taken in all patients after hip fracture surgery guided by Kanis et al [32]. We recommend prescribing any anti-osteoporotic drug with positive effect to increase hip bone mass density as shown in (Table 1). 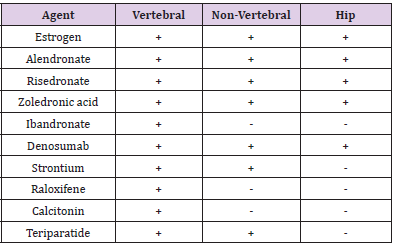 Recently, the American Academy of Orthopedic Surgeons (2015) has published a usefully clinical guideline for hip fracture management into 25 topics (depend on the strength of evidence); 8 topics with strong recommendation, 15 issues with moderate recommendation, and 2 topics with limited recommendation [33, 34]

1 and 2 for preoperative time period, 3 and 4 for surgical technique, and 5 until 8 for postoperative care.

1. Strong recommendation for use of regional anesthesia “unless a clear and compelling rationale for an alternative approach is present”

2. It is no difference of intraoperative pain control including the relative risks and benefits between general anesthesia and spinal anesthesia.

5. Strong evidence supports a blood transfusion threshold of no higher than 8 g/dL in asymptomatic postoperative hip fracture patients unless a clear and compelling rationale for an alternative approach is present.

6. Intensive physical therapy after hospital discharge is an important issue, with a focus on strength of hip-thigh-calf muscles.

7. Strong evidence supports the use of an interdisciplinary care program in patients with mild to moderate dementia to improve functional outcomes.

8. Multimodal analgesia for decreasing complication from high dose of each drug including minimizing narcotic use to avoid delirium.

9 until 11 for preoperative time period, 12 until 18 for surgical technique, and 19 until 23 for postoperative care.

5. Patient with displaced femoral neck fracture (unstable type) can be treated by unipolar or bipolar hemiarthroplasty.

6. Displaced femoral neck fracture in patients with high functional demand should be treated by Total hip arthroplasty rather than hemiarthroplasty.

7. Cemented femoral stem is a treatment of choice for a displaced femoral neck fracture in elderly patients (seventy years or older) without severe cardiopulmonary compromise [35].

9. Patients with stable intertrochanteric fracture should be treated by internal fixation (either sliding hip screw or cephalomedullary nail).

10. Patients with unstable intertrochanteric fracture should be treated by cephalomedullary nail.

11. Venous thromboembolism prophylaxis should be prescribed in all patients with hip fracture.

12. Aggressive physical and occupational therapy is used throughout the continuum of care, with a focus on improving balance, mobility, functional activity of daily living, strength, and fall prevention.

13. Nutritional supplement should be added in all patients with hip fracture postoperatively because they can reduce mortality rate.

14. Calcium and vitamin D supplement should be added in all patients with hip fracture because they usually have coexisting vitamin D deficiency.

15. All patients with hip fracture should be transferred for outpatient evaluation of osteoporosis because of their high risk of further fragility fractures).

2Department of Orthopedic, Phramongkutklao Hospital and College of Medicine, Thailand