Application of TOPSIS Method in Decision Making Via Soft Set

Molodtsov introduced a general mathematical theory, to addressing uncertain and undefined objects which is known as soft set theory. In this work, we study soft set with some definitions and operations, also discuss a soft set technique for order preference by similarity to ideal solution (TOPSIS) method and use this method for decision making.

In recent time, classical methods are used to solve different problems which are faced in medical sciences, engineering, social sciences, etc. Many theories like fuzzy set theory, probability theory, rough set theory, etc. are used to solve these uncertainties, but these theories have their own problems which were attensioned by Zadeh. First of all, (Zadeh) in [1] initiated the concept of fuzzy sets by the extension of classical notion on sets. Nowadays fuzzy set theory is rapidly progressing, but cases, we face some limitations such as how to adjust the membership functions in this theory. Molodtsov proposed the concept of soft set to solve those problems which contain uncertainty in 1999 and defines a soft set as a parameterized family of subsets of universe set where each element is considered as a set of approximate elements of the soft set in the past few years of fundamentals of soft set theory studied by various researchers [2]. Various potential application in soft set in many areas like in smoothness of functions game theory operation research Riemann integration theory of measurement and so on are highlighted in Molodtsov.

In these days, mathematician plays a vital role in the soft set fuzzification. After the fuzzification of soft set, a new theory introduced which is known as a fuzzy soft set with different types and properties Maji et al. [3]. The soft set theory was reviewed [4] and used this theory for decision making, they also introduced different types of soft set with examples and defined some operations such as And-operation, Or-operation, union, intersection, complement, etc. on soft set [5]. In Chen et al. [6] redefine the idea of parameterization reduction in a soft set and compare it with a rough set, they also improve the applications of soft set by using a new definition in the decision-making problem. Some new notions on soft set Ali et al. [7] are introduced, such as restricted union, restricted intersection, restricted difference and extended intersection with examples and properties. Yeşim et al. used the fuzzy TOPSIS method [8] to select a supplier out of three suppliers in a company of garment operating in Turkey. Jahanshahloo et al. extended the approach of the TOPSIS method for decision making by the help of fuzzy data [9].

They also introduced a new concept of normalized fuzzy numbers with the help of α-cuts and applied this proposed concept on numerical problems. The Technique for Order Preference by Similarity to Ideal Solution (TOPSIS) introduced in [10] to solve multi criteria decision making problems with different alternatives. In [11] Chen & Hwang extend the idea of the TOPSIS method and presented a new model for TOPSIS. He also used the newly proposed method for decision making to solve uncertain data in [12]. The authors used this method for the prediction of Diabetes patients in medical diagnosis. In [13-15], the authors presented the applications of fuzzy TOPSIS in different areas and used for decision making. Zulqarnain M and Saeed M [16] used the interval-valued fuzzy soft matrix in decision making. They also introduced a new decision-making method in [17,18] on interval-valued fuzzy soft matrix. In this paper, we discuss about soft set TOPSIS method and used this method for the selection of best candidates for bank jobs.

A pair (F, E) is called a soft set over a given universal set U, if and only if F is mapping of a set of parameters E, into the power set of U. i.e.

Clearly, an soft set over U is a parameterized family of subsets of a given universe U.

Also, for any p ϵ E, F (p) is considered the set of p –approximate element of the soft set (F, P)

For all t∈ A, F(t) and G(t) are an identical approximation

Let (F, A) and (G, B) are two soft sets over U, then their intersection is defined as

Let (F, A) and (G, B) are two soft sets over the same universe U, then their restricted difference is defined as

Let U = {x1, x2, x3, x4, x5} be a set of candidates in interview for job in the bank. Let A and B are two sets of parameters such that A= {a1, a2, a3, a4} where ai represents that the candidates are beautiful, tall, confident and brilliant respectively.

Let B = {b1, b2, b3} be a set that represents the qualification of candidates SSCE, BS, and MS respectively. 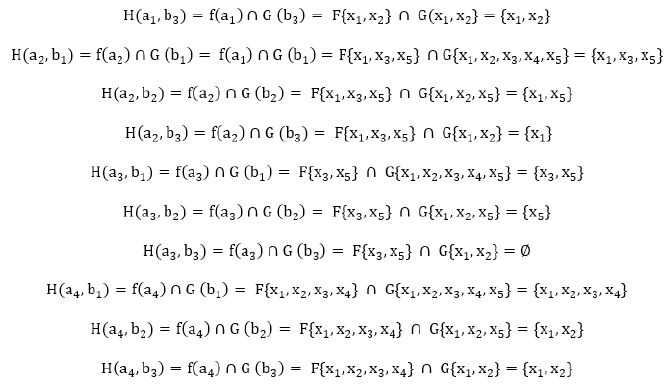 a) Means beautiful applicant with SSCE are {x1,x2}

b) Means beautiful applicant with BS are {x1,x2}

“To solve multiple criteria decision-making problem Hwang and Yoon [10] introduced a technique, which is known as the TOPSIS method. He proposed a positive ideal solution and a negative ideal solution to support the shortest Euclidean distance. The basic assumption is that each criterion needs to be minimized or maximized. For ranking alternatives for closeness to the best answer, the TOPSIS is helpful. The process of TOPSIS is based on an optimum ideal solution since the maximum level is obtained by selecting the best alternative available. The ranking of an ideal solution is done in such a way that the best alternative has rank one while the worst alternative a rank approaching zero. For every alternative, there is an intermediate ranking between the best answer extremes. An identical set of choice criteria permits correct weighting of relative disease and therefore the optimum disease is alarming which needs attention. Here are presented the steps for the TOPSIS technique.

The normalized decision matrix (NDM) denotes the normalized values which represent the relative performance of the alternatives.

The PIS ( I + ) and the NIS ( I − ) are defined with respect to the weighted decision matrix as follows.

Step 5: Separation Distance from PIS and NIS, of Each Alternative

The relative closeness of the ideal solution is computed as

A Decision-Making Method on Soft Set by TOPSIS

a) Step 1: Defining the problem

First, we define the set of decision-makers, set of candidates and set of parameters which are given as

Then a soft set g over P is defined as

b) Step 2: Construct the decision matrix for each decisionmaker 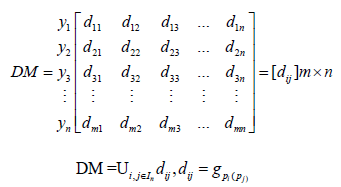 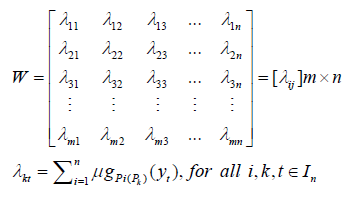 where ϒ (Yi) decide the values of yi, so the decision matrix is ii

First, the first selector D1 chooses the set of parameters for the selection of candidates such as P1 = {Q, Br, C} and construct the soft set.

Now, second selector D2 choose the set of parameters for the selection of candidates such as P2 = {Q, T} and construct the soft set.

Now, third selector D3 choose the set of parameters for the selection of candidates such as P3 = {Be, Br, C} and construct the soft set.

Fourth selector D4 choose the set of parameters for the selection of candidates such as P4 = {Q} and construct the soft set.

Finally, fifth selector D5 chooses the set of parameters for the selection of candidates such as P5 = {T, C} and construct the soft set.

Now, we construct decision matrix for each selector where gpi represent the soft set. (Table 2) 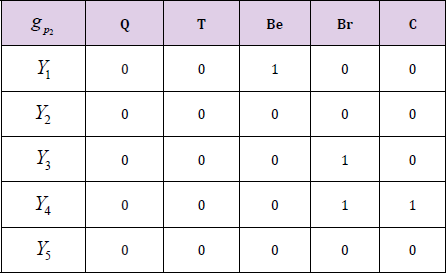 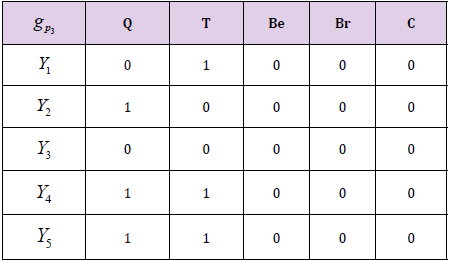 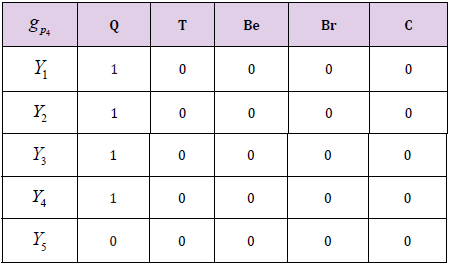 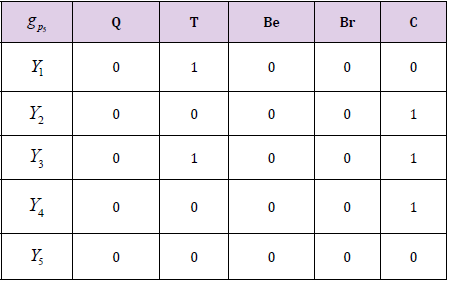 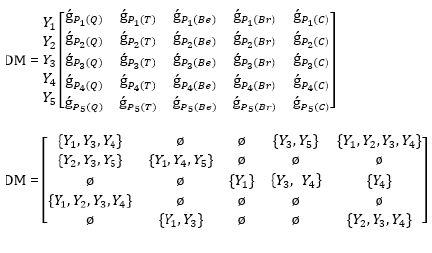 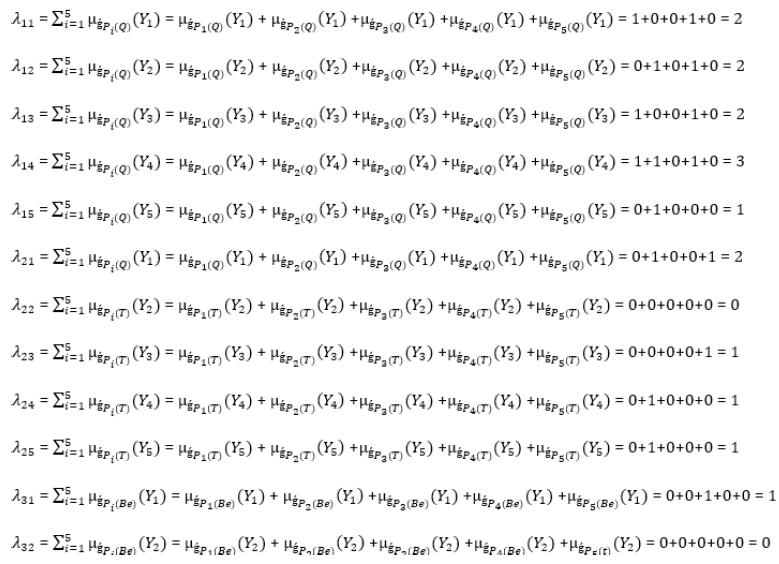 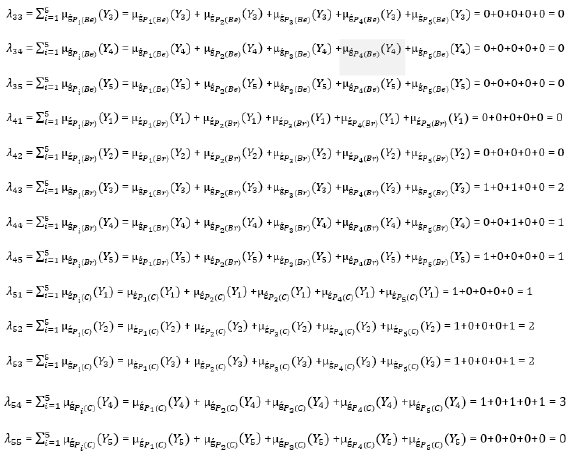 So, the weight matrix is obtained as 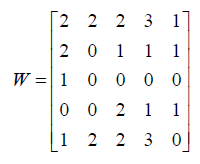 To find all elements of R individually

Thus, the DM of each candidate’s values for the decision-makers is obtained as

Application of TOPSIS Method in Decision Making Via Soft Set

Molodtsov introduced a general mathematical theory, to addressing uncertain and undefined objects which is known as soft set theory. In this work, we study soft set with some definitions and operations, also discuss a soft set technique for order preference by similarity to ideal solution (TOPSIS) method and use this method for decision making.