Measurement of Tissue Pressure in the Dental Pulp, using a Servo-Controlled Counterpressure System, of the Rat Incisor

Several earlier studies have suggested that the positions of teeth in experimental animals and humans may be influenced by vascular forces, probably due to changes in the regional blood flow, vascular pressure, or pulsatile forces in and around the teeth [1-3]. We previously found that local injections of hypotensive and hypotensive drugs caused increases and decreases of the blood flow within the socket, respectively [4-6]. The increased and decreased blood flows are probably caused by vasodilatation and by vasoconstrictions, respectively [4-6]. Since the dental pulp resides in a low-compliance environment, an increase in blood flow, or precapillary vasodilatation, and a decrease in blood flow, or vasoconstriction, will be accompanied by a rise and a reduction in tissue pressure, respectively [7]. Thus, these increases and decrease of the regional blood flow within the tooth socket might have caused an increase and a decrease of the tissue pressure, resulting in the extrusive and intrusive movements of the rat incisor, respectively [4-6].

Animal Preparation and Administration of Vasopressin

All animal experiments were approved by the Institutional Animal Care Committee of Tsurumi University School of Dental Medicine. The rats were anesthetized, as described previously [15]. A polyurethane tube (0.84mm in diameter) was inserted into the left femoral vein. Through this tube, 0, 0.005, 0.05, and 0.5U of vasopressin (Pitressin Inj., Sankyo, Tokyo, Japan) dissolved in 1ml of Ringer’s solution was serially injected in the order of lower to higher doses at a volume of 1mL/kg body weight of the animal.

The axial movement of the mandibular incisor was measured as described previously [15]. The axial tooth movement per minute and the eruption rate (m/min) were calculated. The mean blood pressure was measured using a pressure transducer via a polyurethane tube inserted into the right femoral artery. Regional blood flow at the base of the incisor was measured using a laser Doppler flowmeter as described previously [4,16]. Briefly, to prepare for the measurement, a part of the bone surface at the base of the incisor was surgically exposed, the remaining muscles surrounding the exposed bone were excluded by a polyethylene ring (exclusion ring), and the tip of a needle-type probe (BN-0.5, Bio Research Center) from the flowmeter was then placed close to the exposed bone surface (Figure 1). The blood flow was represented as the relative value of mV. Figures 2a & 2b show the approximate area used to measure the regional blood flow. 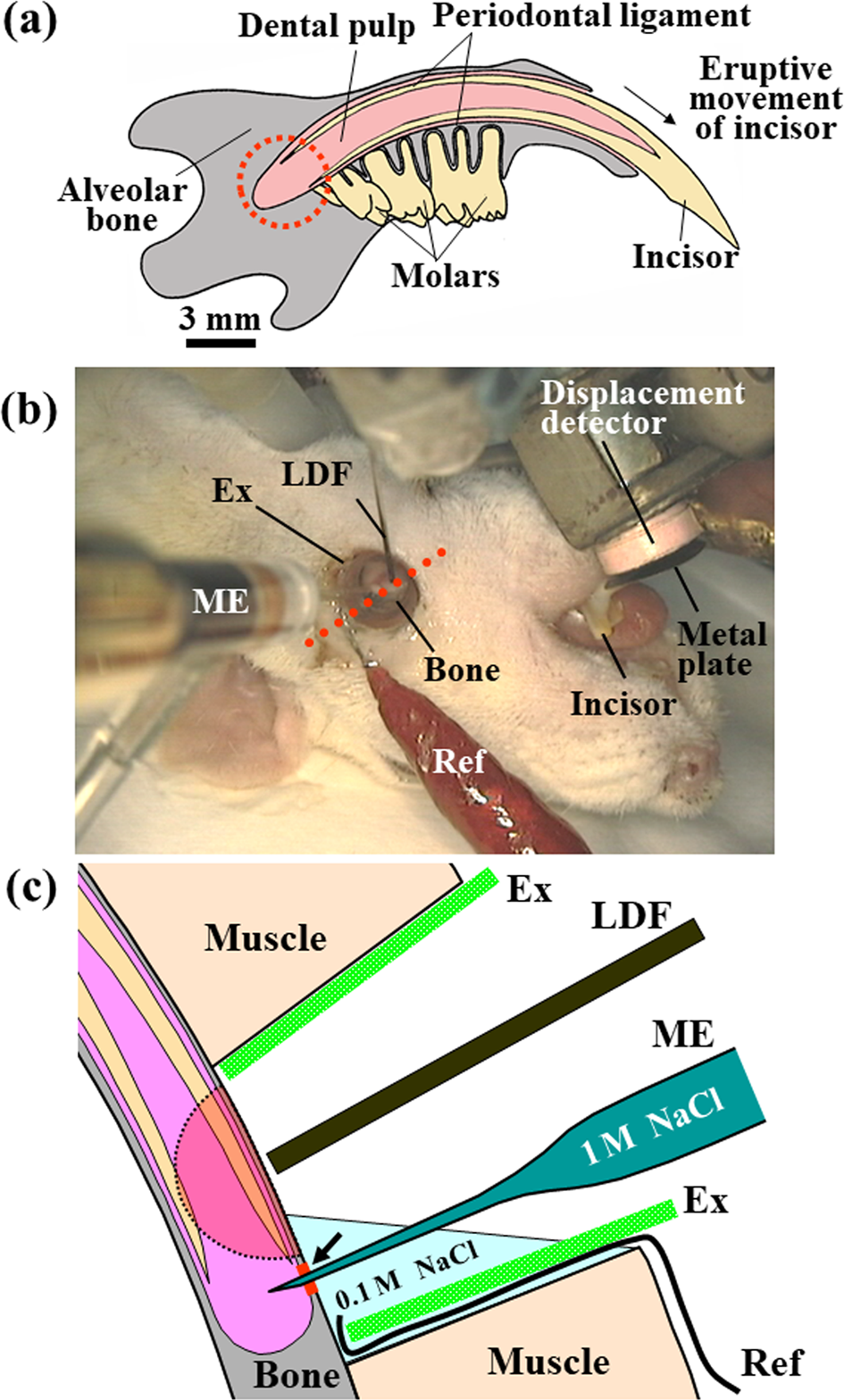 a) Schematic representation of rat mandible seen on the labial side in the supine position. The axial eruptive movement of the incisor, the tissue pressure, and the regional blood flow within the socket (dotted circle) were simultaneously recorded.

b) Experimental setup [7]. The axial eruptive movement (a) of the mandibular incisor was measured with a displacement detector and a metal plate attached to the tooth surface under anesthesia. To measure the regional blood flow and tissue pressure, a part of the mandibular bone surface at the base of the incisor was surgically exposed. The remaining muscles surrounding the exposed bone were excluded with a polyethylene ring (exclusion ring, EX).

c) Schematic representation of a transverse section cut through an axis (red dotted line, (b)) [9]. The regional blood flow was measured by a laser Doppler flowmeter over the exposed mandibular bone. To measure the tissue pressure, a microelectrode filled with 1M NaCl was immersed into a solution of 0.1M NaCl in a space of excluded muscles to adjust the pressure in the microelectrode to 0mmHg and was then inserted into the socket through a bone site (arrow) decalcified by an etching reagent. A ground reference electrode (Ref) was placed in the solution of 0.1M NaCl. An arc with a radius of 1mm, as indicated by the dotted line, show the approximate area where the blood flow could be measured. LDF, a probe from the laser Doppler flowmeter; ME, microelectrode. 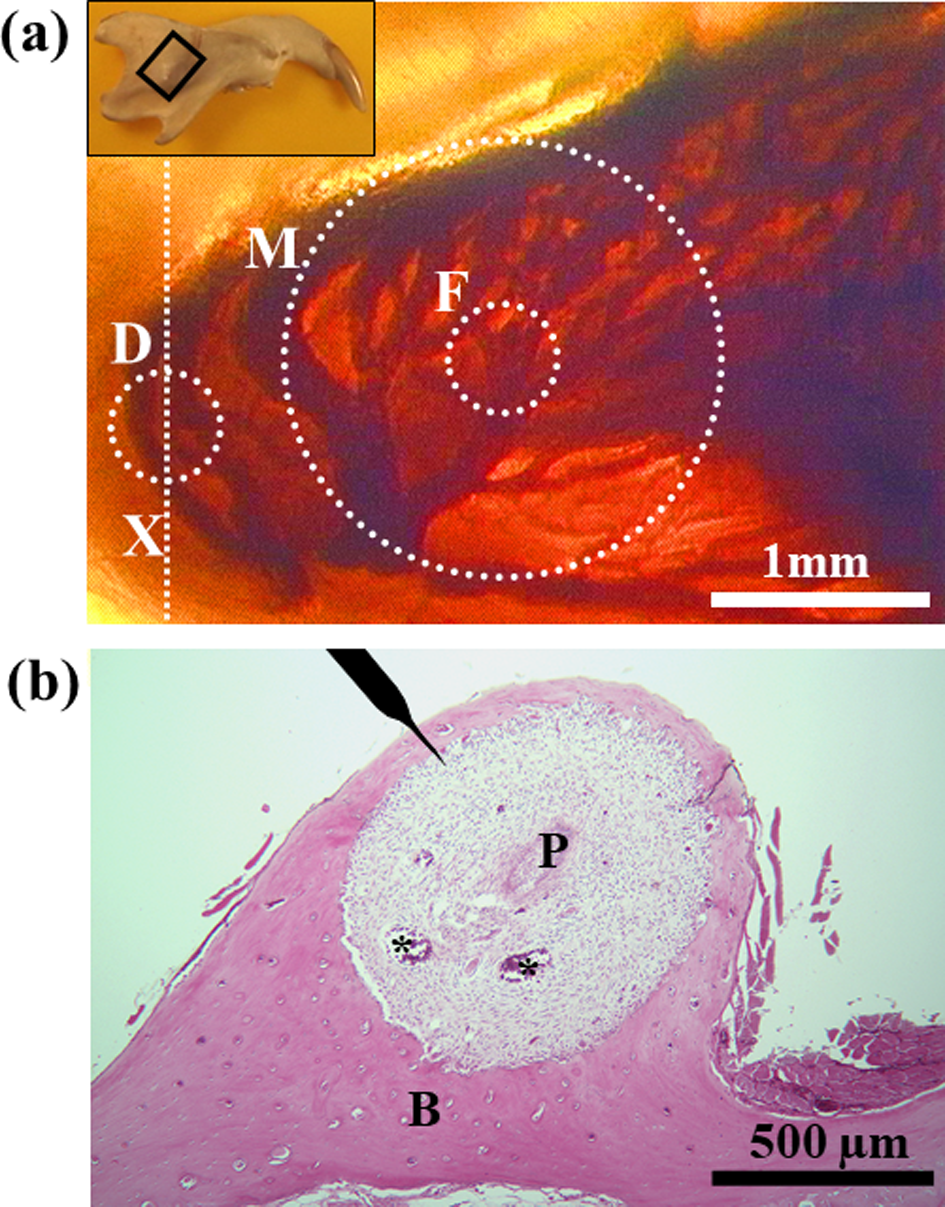 a) Plastic-embedded thick sagittal unstained section of the rat mandibular incisor showing vasculature within the socket of the basal part of the tooth. Transmitted light. Inset, Diagram of rat mandible in the supine position. The framed square indicates the area magnified in Figure 2(a). The dotted circles and line indicate approximate areas where the bone was decalcified to measure the tissue pressure (D), where the probe from the laser Doppler flowmeter was applied (F), and where the blood flow could be measured (M).

b) Hematoxylin and eosin-stained section cut transversely through an axis (Figure 2a, X) showing the site where the tissue pressure was measured. The position of the microelectrode to measure the tissue pressure is shown on top. Asterisks indicate large blood vessels. P, dental pulp; B, alveolar bone.

Measuremen of Tissue Pressure in the Dental Pulp

To insert a smoothly sharpened glass microelectrode for measurement of the tissue pressure through the alveolar bone into the dental pulp, a part of the exposed bone at the base of the incisor, with an approximate area diameter of 0.5mm, was regionally decalcified by an etching reagent (K-etchant, Kuraray Co., Ltd., Okayama, Japan) for 30min (Figures 1b & 2a) under a digital microscope (VH-5910, KEYENCE, Osaka, Japan) equipped with a zoom lens (VH-Z05, KEYENCE). The measurements of the tissue pressure were performed with the glass microelectrode with tip diameters of 4 to 6m, filled with 1M NaCl. The microelectrode mounted on a micromanipulator was connected to a servo-controlled counter pressure system (900A Micropressure System, World Precision Instrument, Inc., FL, USA). The tip of the microelectrode was first immersed in a solution of 0.1M NaCl in a space of excluded muscle (Figure 1b) to adjust the pressure value in the microelectrode to 0 mmHg. After a stable pressure value without oscillation was observed for 5min, the tip of the microelectrode was inserted into the socket through the decalcified site using the digital microscope. When the mean value of a pressure reading with a steady small oscillation (within a few mmHg) for more than 5min was obtained as the control tissue pressure, the injections of vasopressin were performed. The resulting data were downloaded onto a computer (Macintosh PowerBook, Apple Japan, Inc., Tokyo, Japan) by an analog-digital converter (MacLab, ADInstruments Japan Inc., Nagoya, Japan) at intervals of 0.5s and were reconstructed at intervals of 6 s.

Changes in the regional blood flow, and the tissue pressure in the dental pulp after various doses of vasopressin 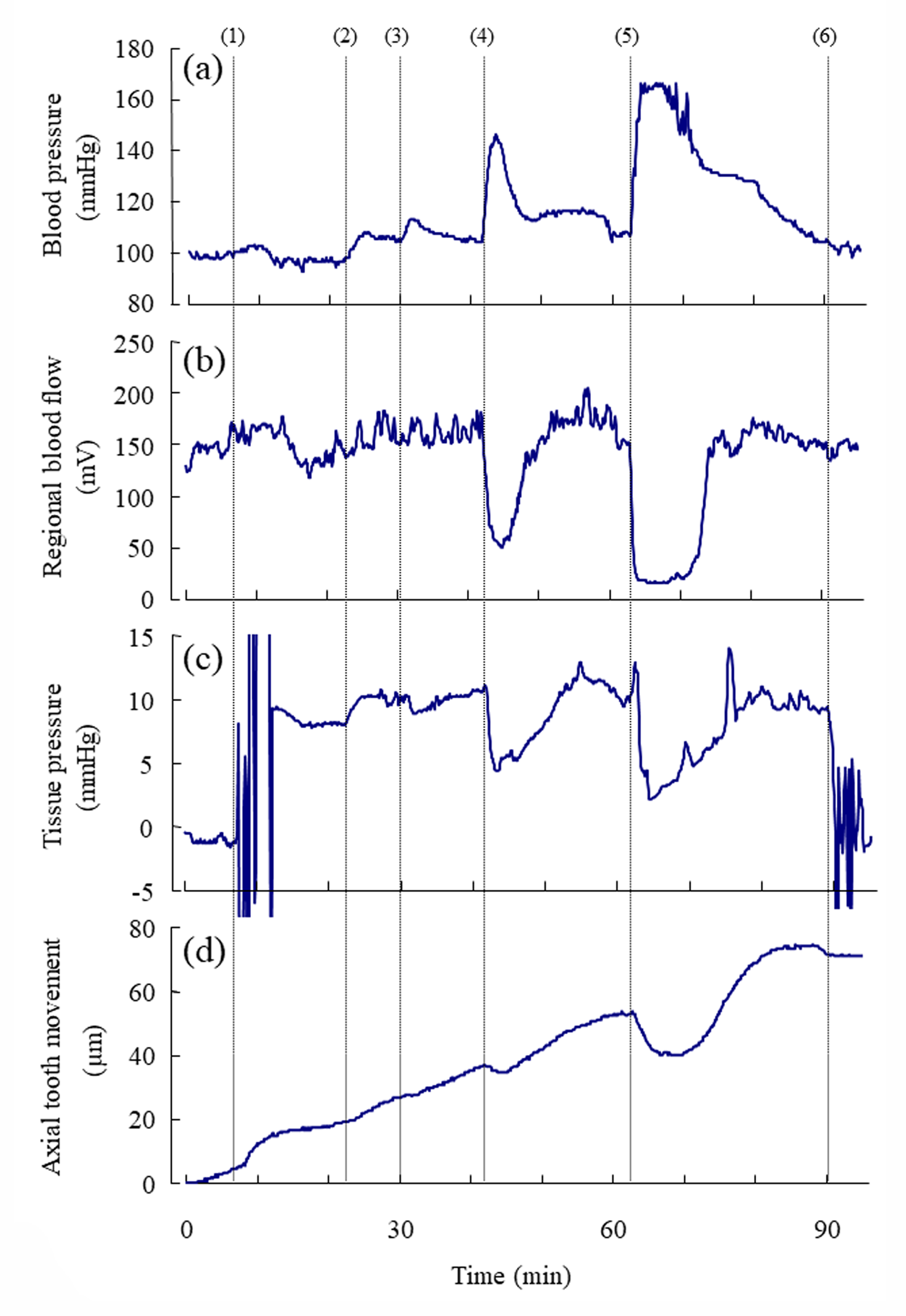 Figure 3: Representative example of the simultaneous recording of

a) the mean arterial blood pressure (mmHg),
b) the regional blood flow (mV) at the base of the incisor,
c) the tissue pressure (mmHg) at the base of the incisor, and
d) the axial tooth movement (μm) following the injections of vasopressin.
Number (1) indicates the insertion of the microelectrode into the dental pulp for measurement of tissue pressure. Numbers (2), (3), (4), and (5) indicate the starts of the injections of 0, 0.005, 0.05, and 0.5 U/kg of vasopressin, respectively. Number (6) indicate the removal of the electrode from the tissue. Each point represents the mean value (n= 8 ∼ 14) at intervals of 6 s.

Changes in the Axial Tooth Movement after Various Doses of Vasopressin 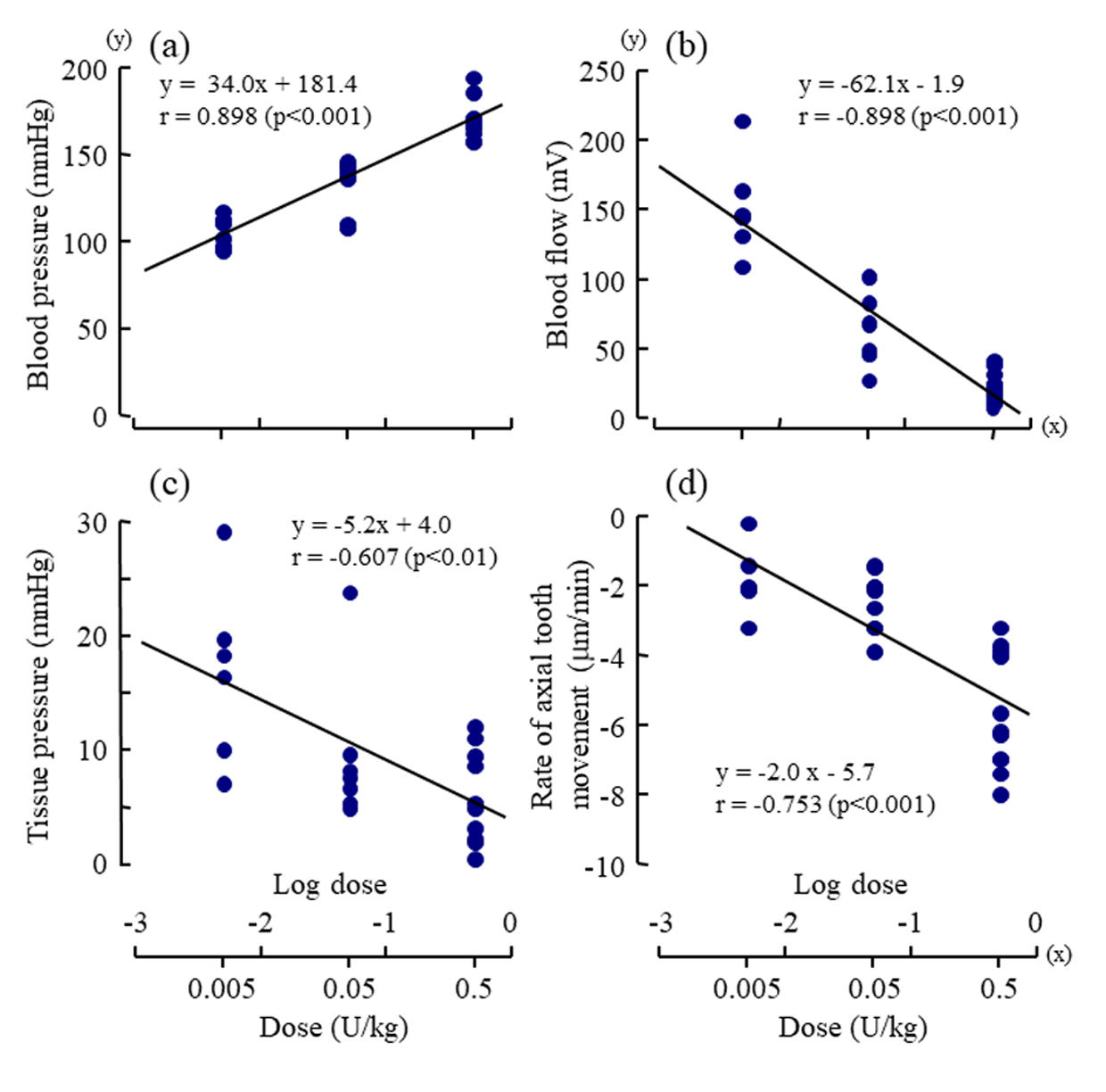 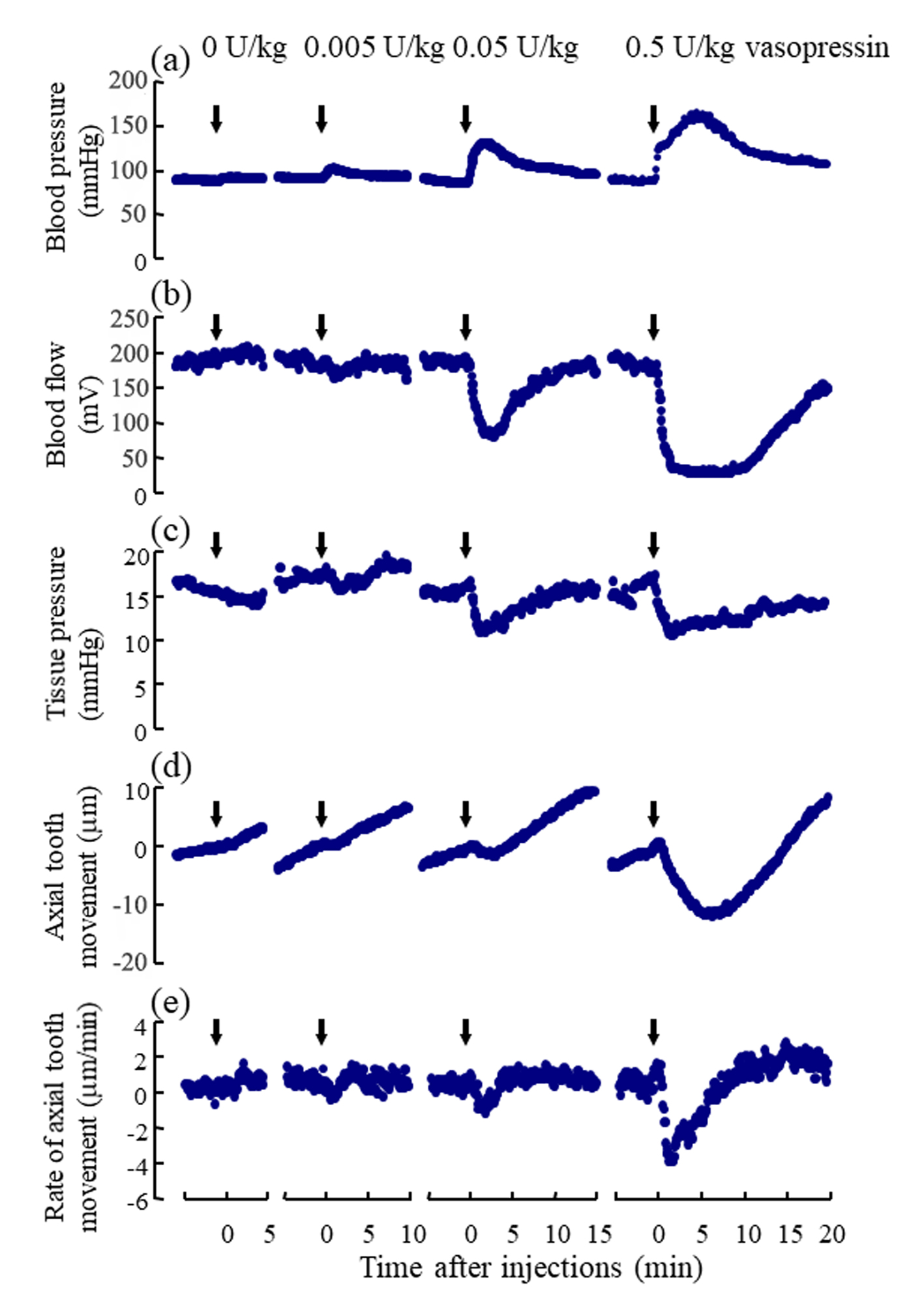 Suppl. Figure 1: Changes in the mean values of
a) arterial blood pressure (mmHg),
b) regional blood flow (mV),
c) tissue pressure (mmHg),
d) axial tooth movement (m), and
e) rate of axial tooth movement (m/min) following the injections of vasopressin.
Arrows indicate the start of the injections of 0, 0.005, 0.05, and 0.5 U/kg vasopressin, respectively. Each point respresents the mean of eight to fourteen rats at intervals of 6 s.

Measurement of the Tissue Pressure in the Dental Pulp

The servo-controlled micropressure measurement technique [8] combined with micropuncture pipette [7,11,12] has been considered to be the most reasonable and reliable method for the direct measurement of tissue pressure within the tooth; this method is less traumatic than the previously used methods [9,10]. Here, we decalcified the exposed bone at the base of the incisor using etching agent and could then insert the glass microelectrode for measurement of tissue pressure through the bone into the dental pulp. The acidic agent for decalcification of the bone might have caused inflammation within the dental pulp. However, we could determine the dose-response effects of vasopressin on the blood flow and tissue pressure within the socket, and the axial tooth movements in fourteen animals and these signals after rinses between different drug doses returned to almost the same baselines. Thus, only a small area of the apical dental pulp appeared to be affected by inflammation. These inevitable effects seem to be small compared to the experimental marked responses against vasopressin. We were able to measure the tissue pressure in the dental pulp with less variations and less noises in the present study.

It is important to understand the physiological characteristics of the vasculature in and around the tooth in relation to the axial tooth movement. The dental pulp is a highly vascular tissue enclosed in rigid mineralized dentin [17,18] blood vessels enter and exit the pulp via the apical and accessary foramina with nerve bundles, and its circulation lacks collateral circulation. The capillaries are present as two types: continuous capillaries and fenestrated capillaries [19]. The latter type of capillaries presents a thin endothelium layer exhibiting circular transcellular openings. Most fenestrated capillaries are found in the subodontoblastic plexus. The periodontal ligament of the rat teeth has a greater percentage of its capillary surface area occupied by fenestrations and contains a greater number of fenestrations per unit volume tissue [20]. The tissue fluid produced from such blood vessels in and around the tooth is one of the important physiological factors of the microvascular environment [17-20]. It has also been found that pulpal blood flow and tissue pressure simultaneously increased after electrical tooth stimulation, suggesting that vascular distension caused by the increased blood flow compresses the lowcompliance pulpal tissue [18-21]. In addition, the increases in the regional blood flow following local injection of acetylcholine and Ringer’s infusion were observed in the rat incisor [5,6]. Thus, the vasoconstriction by vasopressin caused a decreased regional blood flow, leading to a decreased regional fluid volume within the tooth socket, which should have decreased the regional tissue pressure in the rigid enclosed dentin chamber [7,17,18,22].

Relationship between the Tooth Movement and the Tissue Pressure

The present analysis showed the correlation of the axial movement and the tissue pressure within the socket as well as the correlation of the axial tooth movement and the blood flow within the socket (Figure5b & 5c). Van Hassel and McMinn recorded the pressure (10mmHg) within erupted teeth and the pressure (23mmHg) within erupting teeth [9]. In recent studies, the tissue pressure values measured with the micro puncture technique were 5.5 and 9.9 mmHg in cat and ferret dental pulp, respectively, and 15.2mmHg in the rat incisor periodontal ligament [7,11,12]. The present value (17.1mmHg, Suppl. Figure1S) of the tissue pressure in the dental pulp of the rat incisor by the same technique is like the last value. When the forces required to restrain the eruptive movements of the rat mandibular incisors under anesthesia were converted to pressures [23-25], the forces were calculated to be 10-15mmHg. The tissue pressures are higher in the dental pulp and periodontal ligament of the erupting teeth than in those of the erupted teeth, suggesting a possible relation between the eruptive tooth movement and the tissue pressure.

The measurement of the tissue pressure as well as the blood flow in and around teeth is very useful to investigate into the relationship between the tooth movement and its vasculature.

The authors indicated no potential conflicts of interest.

This research was supported by research grants from the Society for the Tsurumi University School of Dental Medicine and from JSPS KAKENHI Grant Number JP18K09757.

Measurement of Tissue Pressure in the Dental Pulp, using a Servo-Controlled Counterpressure System, of the Rat Incisor