To evaluate the clinical significance of I-131 ablation in patients with differentiated thyroid cancer.

It is estimated that 1,900 of 100,000 people (1.9%) will develop thyroid cancer in their lifetime and 800 (0.8%) will die from it [1]. The 20-year survival rate of differentiated thyroid cancer varies from 99% in low-risk patients to 57% in high-risk patients [2]. Common treatments for thyroid cancer include surgery, such as total and subtotal thyroidectomy, chemotherapy, and molecular targeted therapy. I-131 ablation is specifically aimed to ablate the thyroid bed that remains following total thyroidectomy to prevent local recurrence and consequently reduces the metastasis and recurrence rates following thyroidectomy [3]. Various recent studies demonstrate that the effective rate of I-131 ablation using 30mCi is equivalent to 100 mCi [4-6]. This finding was supported further by a meta-analysis that demonstrated that there was no significant difference between the administration of 30 mCi and 100 mCi of I-131 in terms of its efficacy [7].

A total of 43 patients with differentiated thyroid cancer who received total thyroidectomy and not having any metastases to lymph nodes and other organs between July 2011 and July 2018 were studied. Computed tomography (CT), 18-F-fluorodeoxyglucosepositron emission tomography computed tomography (FDG-PET/ CT), cervical magnetic resonance imaging (MRI) and thallium-201 (Tl-201) scintigraphy were performed just before ablation to rule out metastases.

Prior to the ablation, patients underwent a pre-treatment protocol to increase the level of plasma thyroid-stimulating hormone (TSH) and restrict intake of iodine in order to enhance I-131 uptake into the residual thyroid tissue. To achieve this, 8 patients underwent a thyroid hormone withdrawal protocol, and 35 patients received recombinant human TSH (rhTSH, Thyrogen®; Genzyme Corporation, Cambridge, MA, USA). Thyroid hormone withdrawal involved cessation of thyroid hormone preparations 4 weeks prior and restriction of iodine intake 2 weeks prior to the administration of I-131. Similarly, rhTSH administration was performed following a 2-week restriction of iodine intake, followed by intramuscular injections of 0.9 mg rhTSH for 2 days prior to the administration of I-131. All patients were administered 30 mCi of I-131 following pre-treatment protocols. I-131 single-photon emission computed tomography (SPECT-CT, NM/CT 670 Q. Suite pro, General Electric, Milwaukee, Wisconsin, USA) was performed 72 hours after the administration of 30 mCi of I-131 to determine the presence of a residual thyroid bed. An MEGP collimator was used for imaging and the data were acquired at the rate of 10.0 cm/min for 30 secs/step. A total of 30 steps were collected with a matrix size of 128 × 128.

Assessment of Low-Dose I-131 Ablation

To assess the efficacy of ablation, follow-up I-131 scintigraphy was performed 4 to 6 months after ablation in patients who had a residual thyroid bed identified in the initial scintigraphy. The efficacy of ablation was assessed visually based on the follow-up scintigram. Disappearance of the thyroid bed was defined as a success and the presence of residual uptake was defined as a failure.

Measurement of Tg And Anti-Tg Antibody

As serum thyroglobulin (Tg) is a tumor marker for thyroid cancer used to detect postoperative recurrence as well as the efficacy of I-131 ablation, the relation between the serum Tg level and recurrence of thyroid cancer following ablation was examined. The serum Tg and anti-Tg antibody levels were measured just before the ablation (baseline Tg), following the pre-treatment protocol (stimulated Tg), and at 6 months after the ablation (follow-up Tg). High Tg level (high-Tg case) was defined as Tg ≥ 2 ng/mL and low Tg level (low-Tg case) was defined as < 2 ng/mL at 6-month follow-up, irrespective of the baseline Tg level. However, patients with high anti-Tg antibody (> 28 U/mL) were excluded from this grouping since Tg level could not be measured accurately.

Follow-Up After Low-Dose I-131 Ablation

Differences between the 2 groups were analyzed using the Student’s t-test for continuous variables and the Fisher’s exact test for categorical variables. The log-rank test was used to determine the rate of thyroid cancer recurrence using Tg levels (baseline, stimulated, and follow-up Tg) during the follow-up period. MINITAB 14 (Minitab Inc., State College, PA, USA) was used for the analyses, and a significance level of < 5% (p<0.05) was considered significant. 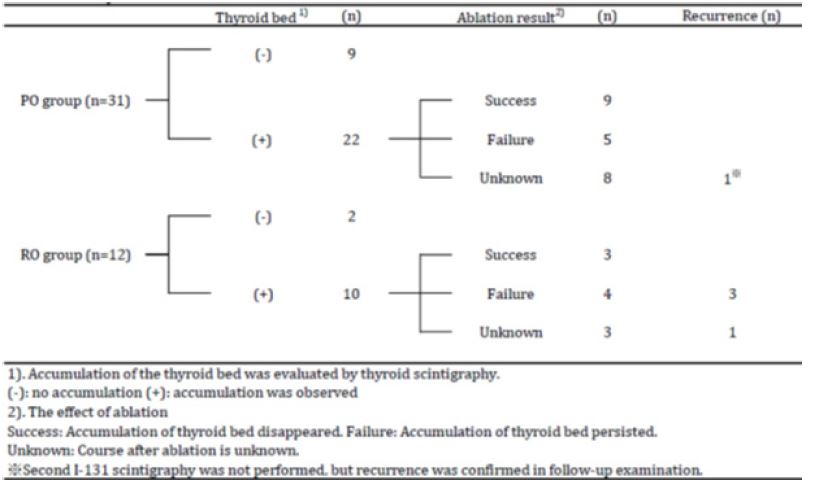 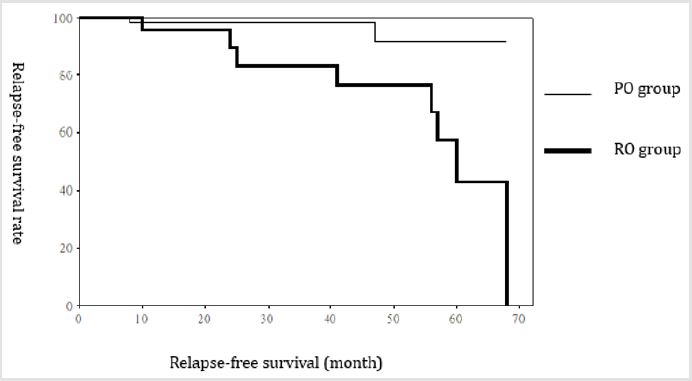 Figure 2: The case in PO group had rib recurrence. A 41-year-old woman. Total thyroidectomy and cervical lymphadenectomy were performed for papillary thyroid cancer in 2013, followed by ablation 2 months later. No metastasis and recurrent disease are detected by FDG-PET/CT at the time of ablation (Figure 2a). The serum Tg level is abnormally high 6 months after ablation (42.5 ng/mL), and FDG-PET/CT shows metastasis in the right 10th rib (Figure 2b). External-beam radiotherapy with 30 Gy was performed to target the metastatic lesion in September 2014. The serum Tg level decreases from 64.8 ng/mL before externalbeam radiotherapy to 5.7 ng/mL after external-beam radiotherapy. The patient is currently being followed-up with no signs of metastatic disease to date.

a) FGD-PET/CT at the time of I-131 ablation. There are no clearly abnormal findings.
b) FGD-PET/CT 8 months after I-131 ablation. A continuous distribution of FDG uptake is seen from the right 10th rib to the internal abdominal oblique muscle (white arrow), indicating bone metastasis following surgery for thyroid cancer. 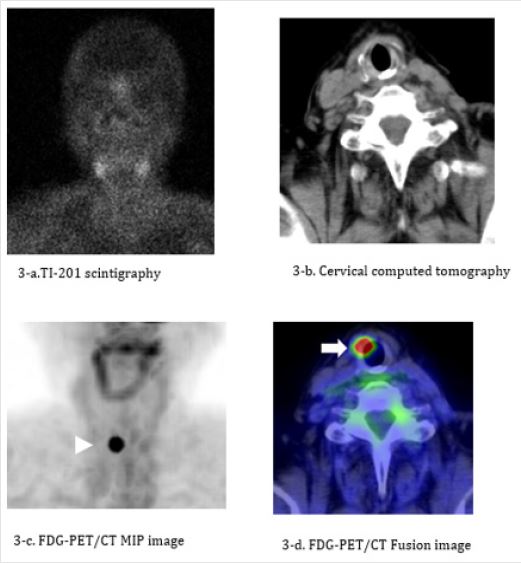 Figure 3: The case in RO group had local recurrence in the neck. A 77-year-old woman. Subtotal thyroidectomy and cervical lymphadenectomy were performed for papillary thyroid cancer in 2010. Metastasis to the superior internal jugular node was detected in 2012, and resection of the tumor and remaining thyroid tissue was performed. I-131 ablation was performed 3 months later, and no metastasis and recurrent disease are seen on cervical CT and Tl-201 scintigraphy performed at the time of ablation (Figure 3a, 3b). FDG-PET/CT performed 1 year postoperatively during the follow-up period shows local recurrence in the anterior portion of the thyroid cartilage (Figure 3c, 3d). The serum Tg level is relatively low (4.7 ng/mL) at the time of recurrence.

a) TI-201 scintigraphy performed at the time of I-131 ablation. There is no abnormal uptake indicative of metastasis or recurrence.
b) Neck contrast-enhanced CT performed at the time of I-131 ablation. No abnormal findings are detectable.
c) A hot spot is seen in the neck region on the maximum intensity projection (MIP) image (white arrowhead).
d) Significant FDG uptake is observed in the right side of the trachea on the fusion image (white arrow), indicating local recurrence following surgery for thyroid cancer. 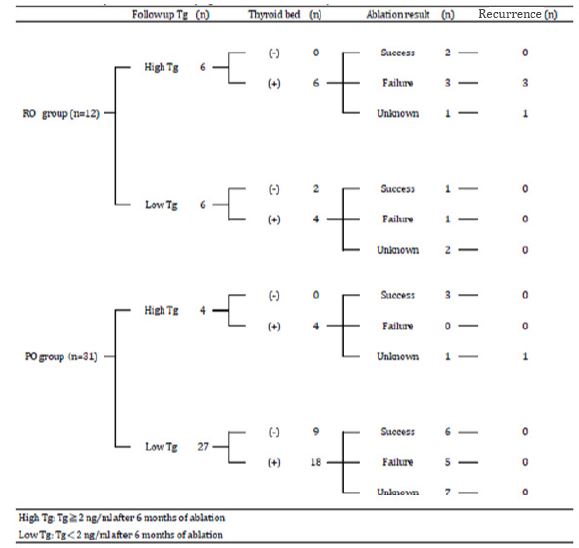 Table 4: Relationship between followed up Tg value and recurrence of thyroid cancer. 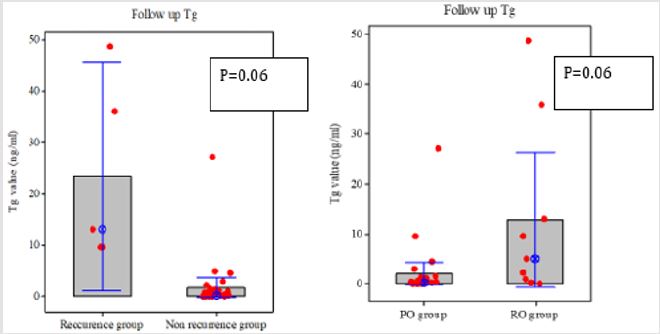 Figure 4: Comparison of Tg levels. The follow-up Tg level tended to be higher in RO group than in PO group, and in patients with recurrent disease than in those without.

Furthermore, the degree of differentiation is reported to be reduced in a relatively high proportion (11-13%) in patients with recurrent thyroid cancer [11,17]. Tumors become increasingly poorly differentiated after repeated episodes of recurrence with a rate ranging from 7% for the first recurrence and 21% for the second recurrence, indicating that recurrent lesions of differentiated thyroid cancer are likely to undergo anaplastic transformation at a relatively high rate [17]. In the present study, all the patients in RO group had a history of recurrence of thyroid cancer prior to ablation. Therefore, it is possible that they had lesions that had undergone dedifferentiation or anaplastic transformation at the time of ablation. Differentiated thyroid cancer arises from follicular epithelial cells of the thyroid that have become cancerous and acquire the ability to take up iodine (dependent on the NaI symporter), and ablation with I-131 take advantage of this ability. However, approximately 30% of patients with differentiated thyroid cancer are reported to lack the ability to take up iodine. If small metastatic lesions that do not express NaI symporter exist at the time of ablation, these lesions would not be detected by scintigraphy and would likely contribute to subsequent recurrence.

In the present study, as time from the initial surgery to ablation was longer in the RO group than in the PO group, it is highly likely that anaplastic transformation and micro-metastasis may have occurred during this period leading to a low efficacy rate to ablation. Tg is a tumor marker used to detect recurrence of thyroid cancer following total thyroidectomy and previous studies demonstrated that it is a highly specific marker for thyroid cancer [18,19]. However, the level of serum Tg is not necessarily specific to cancer but depends on the amount and activity of thyroid tissue, which increases in Graves’ disease and in non-malignant thyroid tumors as the mass of thyroid tissue and tumor size increase [20]. There were no significant differences in the Tg and stimulated Tg levels at baseline between PO and RO groups, and between patients with and without recurrence of thyroid cancer. These data suggest that serum Tg alone is limited in predicting postoperative recurrence of differentiated thyroid cancer. On the other hand, the follow-up Tg levels were higher in RO group than in PO group and in patients with recurrent disease compared with those without recurrent disease. All 5 patients who had recurrent disease had high serum Tg levels (9.6-48.7 ng/mL) at 6 months after ablation.

Three patients who did not respond to ablation had high levels of follow-up Tg and developed recurrence of thyroid cancer during the follow-up period, specifically local recurrences in the neck. In contrast, there was no recurrence in patients who responded to ablation and serum Tg level was low (<2 ng/mL) at 6 months after ablation. Although, there is an individual difference in terms of the efficacy of ablation since it depends on the uptake of I-131 in the thyroid tissue and whether the iodine intake was properly restricted prior to ablation, the present findings suggest that the risk of local recurrence is high in patients with residual thyroid bed with high serum Tg level at 6 months after the initial ablation. Thus, ablation with radioactive iodine is recommended following total thyroidectomy for differentiated thyroid cancer who are at risk of recurrence. Based on the present findings, we recommend active consideration of multidisciplinary treatment 6 months after initial ablation to prevent local recurrence.

The authors declare no conflicts of interest associated with this manuscript.

To evaluate the clinical significance of I-131 ablation in patients with differentiated thyroid cancer.