Conclusion: The expression of biomarkers of stem cells in GBM is associated with a greater severity of anaplasia and tumor proliferative activity. So, it can be assumed that the aggressiveness of GBM is at least partly due to the presence of cancer stem cells in the tumor mass. Due to the resistance of these cells to radio- and chemotherapy, the described phenomena may be associated with lower therapeutic efficacy in patients with GBM.

In the current classification of the World Health Organization, gliomas are classified into four grades (G1-4). The most malignant in this group of CNS tumors is Glioblastoma multiforme (GBM). Despite advances in neurosurgery, radiation and chemotherapy, the average survival rate is only several months [1]. GBM is a cancer with a very diverse morphological image with features of pronounced anaplasia.
The previous decade has been a period of interest in cancer stem cells, identified in a variety of primary tumors. Stem cells in GBM may be isolated from other cells in the primary tumor of the brain with the use of markers of neural stem cells, i.e. CD133, Nestin, βIII-tubulin, as well as markers of glial cells, for example GFAP. Currently, it is being suggested that transcription factors such as Nanog, Oct-4, Rex and Olig2 can be used as biomarkers of cancer stem cells and help identify these cells in a tumor mass [3-5]. CD133 is a transmembrane cell-surface glycoprotein. Cells expressing this marker comprise from 3.5% to 46% of the total cells in a tumor and are more frequent in tumors with a higher grade of malignancy [6]. CD133+ cells repair DNA damage significantly faster than CD133- cells [7]. Nestin is an intermediate filament protein playing an important role in organogenesis, cell metabolism and cytoskeletal organization. It may be re-expressed in neoplastic transformation [8]. βIII-tubulin is one of the two globular proteins which form microtubules in combination with α-tubulin. This protein is predominantly expressed in neurons and is involved in neurogenesis. Overexpression of βIII-tubulin has been reported in various cancers, including GBM [9].

GFAP is an intermediate filament protein. Its expression depends on the maturity of tumor cells. Therefore, primitive glioma cells may fail to exhibit reactivity with antibodies detecting the antigen, while mature cells are characterized by a high expression of GFAP [10]. Oct-4 and Nanog transcription factors are necessary for keeping stem cells in the state of pluripotency. Clinical studies have demonstrated the expression of Oct-4 and Nanog in a variety of cancers, including GBM [11-14]. Olig2, in turn, a transcription factor, whose expression is largely limited to the CNS, where it acts as a both anti-and pro-neurogenic agent, depending on the degree of cell development. It is understood that Olig2 is the most specific marker of GBM stem cells [15]. Rex is a marker of pluripotency of embryonic cells. Its expression decreases with the degree of cell differentiation [4]. A number of stem cell markers, including cancer and specifically GBM, have been identified and well described in literature. Previous research has revealed a relationship between some GBM stem cell markers and clinical features of cancer, such as a response to treatment and survival. However, no attempts have been made to determine a relation between the expression of stem cell markers in GBM and morphological features of this tumor.

The study involved material containing cancer tissue collected during a routine neurosurgical treatment of 21 patients of both genders (10 women, 11 men) aged 30 to 77 years (median 56 years). The study protocol did not include another procedure during surgery or collection of more material than necessary for tumor removal. Nervous tissue comprising cancer tissue was frozen directly after removal in liquid nitrogen and frozen at -80°C. Once the diagnosis was confirmed by histopathological examination, detection of stem/progenitor cells was performed with the use of molecular assessment. 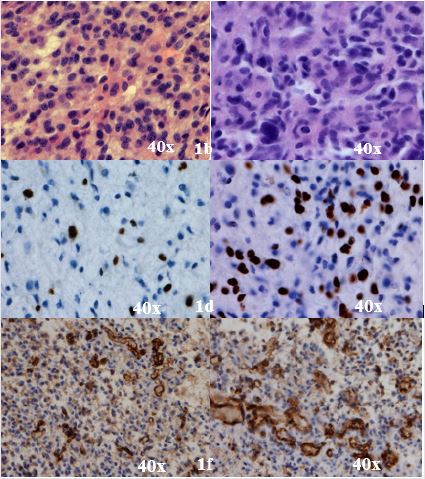 Figure 1: Relatively small (1a) and evident (1b) pleomorphism within the GBM. Examples of proliferation activity within single specimen taken from GBM with Ki-67 labeling index < 15% (1c) and >15% (1d). Predominance of thin-walled vessels (1e) vs predominance of vessels with marked endothelium proliferation (1f).

There were two main types of variables assessed: measurement variables and qualitative variables. The results were presented as mean and standard deviation. Data were compared between groups using the nonparametric Mann–Whitney U-test for continuous variables. All statistical tests were two-tailed, and p < 0.05 was considered to indicate statistical significance. All statistical analysis was performed with STATISTICA 12 software.

In conclusion it should be emphasized that despite a relatively small number of patients in this study we were able to identify cells in the GBM tissue which, using appropriate markers of cancer stem cells, it can be assumed with high probability that these are GBM stem cells. They coexisted significant with the pleomorphism and proliferative index of this tumor. The cancer stem cells are most likely responsible, at least in part, for the recurrence of tumor and shorter survival. This hypothesis is supported by experimental results, which show that cancer stem cells are characterized by high activity of membrane proteins (ABC transporters) and increased ability to repair DNA, also after radiotherapy [16-18,4,19]. In view of the above, the present study compared the expression of cancer stem cell markers with selected histopathological features of GBM, such as nuclear pleomorphism, pathological proliferation of endothelium including the formation of glomerular-shaped vessels and tumor proliferative index. Significantly higher expression of CD133 and Nestin were found in GBM with evident nuclear pleomorphism. Such a role of CD133 protein may be promoted by its ability to quickly repair damaged DNA [7].
Here we would like to pinpoint one of the mechanisms that most likely contributes to the resistance of stem cells in the tumor to the currently available treatment. GBM has features that play an important role in tumor progression, such as invasiveness and the ability to create specific vascularity. This allows cancer cells to adapt to the anoxemic environment.
Persano et al. [26] showed that poorly differentiated cancer stem cells of glioblastomas are located mainly in the layers of weakly oxygenated cells, while more differentiated cancer cells are found in better vascularized regions, and therefore, at least theoretically, better supplied with oxygen and better nourished. Importantly, cytostatics, including temozolomide, have a much worse reach into areas with less blood.

We would like to thank to the Neurosurgery Department Pomeranian Medical University for their helpful assistance. This work was supported by Minister of Science and Higher Education Grants.

Conclusion: The expression of biomarkers of stem cells in GBM is associated with a greater severity of anaplasia and tumor proliferative activity. So, it can be assumed that the aggressiveness of GBM is at least partly due to the presence of cancer stem cells in the tumor mass. Due to the resistance of these cells to radio- and chemotherapy, the described phenomena may be associated with lower therapeutic efficacy in patients with GBM.