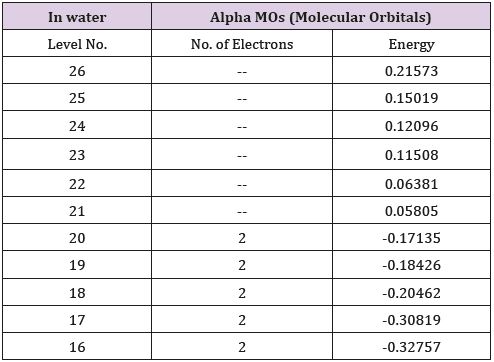 Table 1: Number of energy levels and their potential energies.

For accurate study, thermodynamic analysis is important for obtaining the individual and specific micro data to illustrate the solute-solvent interaction picture by using Gaussian 09 program. Density functional theory (DFT) were carried out on applying Gaussian 09 program packages [1]. The Beck’s 3- parameters exchange functional and Lee – Yang – Paar’s correlation functions (B3LYP) were studied in DFT method [2], 6-321G (D,P) basis sets were applied to give stable geometry. In Gaussian 09 the ideal gas approximation for non-interacting particles are used for starting calculations. The very important point for the calculations is the estimation of partition function Q (V,T) which correspond to total partition function [3,4]. The aim of the work is to complete the study of the active compound glycine thermochemical properties to get light on it and explain its solvent effect (Table 1).
The necessary equations used for evaluating entropy, energy, heat capacity resulting from the calculation frequencies for glycine in water by the use of Gaussian 09 package are given below:

and NA kB = R where NA is Avogadro’s number R is the gas constant, kB is Boltzmann’s constant and Q is the partition function changing into log scale we get:

The thermal energy can also be obtained from the partition function:

The heat capacity can be evaluated by applying equation4:

The ZPVE was calculated for glycine in water.

The HOMO and LUMO orbitals are evaluated theoretically and drawn in Figure 1 indicating the last fill orbital shape and minimum empty orbital. These orbitals obtained from alpha orbitals evaluated from Gaussian 09 package. Also, different HOMO orbitals were represented in Figure 1 which are HOMO-1, HOMO-2, HOMO-3. HOMO as explained before in the last filled orbitals. Different loops was appeared in last HOMO orbital which is jointed in lower filled HOMO orbital. The LUMO orbital is bigger one in comparsion to the orbitals above it, like LUMO+1, LUMO+2, LUMO+3 and LUMO+4 (Figure 1). The energy gap which is the difference between last HOMO and first LUMO orbitals is 0.2294ev. This value indicate that glycine in water can conduct electricity in good case. The energy gap between last HOMO and other LUMO orbitals increase as represented in Table indicating less conduction for large transfer of electrons.
Different contribution for Glycine in Water:
The different types of motions were studied theoretically for glycine in water and summarized as given next.

The contribution to internal energy is:

Finally, the heat capacity at constant volume is

This last contribution can be calculated from the electronic partition function

Where w is the degeneracy of energy level, E0 E1 E2 En is the energy in n-level.
The entropy due to electronic kinetic motion is:

Since we have no temperature dependent terms in partition functions, the electronic heat capacity and electronic motion energy and internal energy are both zero

The rotational partition function is:

Where θr =h2/ 8 π2 IkB I is the moment of inertia δr is the rotational diameter
The entropy of rotation is given by:

The contribution for rotation internal energy is:

And contribution to heat capacity is:

For nonlinear molecule as glycine, the rotation energy and heat capacity at constant volume is given by: 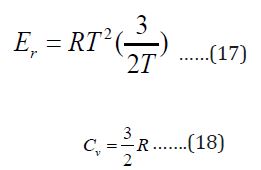 The total entropy, energy and Cv from vibrational partition function are: 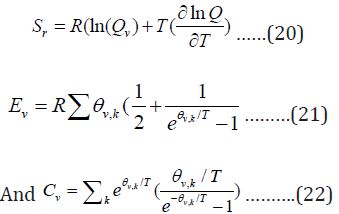 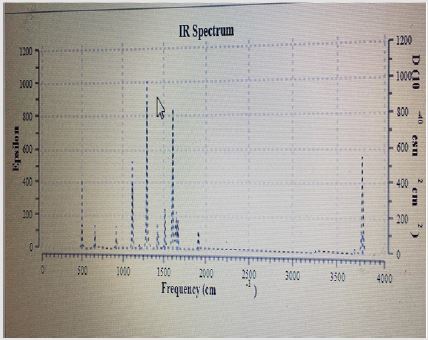 Output from Frequency Calculations. The first part of the obtained frequency data for glycine in water using theoretical evaluation by Gaussian 09 is the degree of freedom which is 15 for glycine in water. The rotation constant in GHZ are 10.588, 4.2511 and 3.149. The calculation based on standard basis 3-21G. The second result is the dipole moment and multiple moments for glycine in water. The individual different moment direction are given in Appendix table with high total dipole moment of 14.013 in water explaining it high activity in aqueous media. Glycine also has big quadrupole moment, traceless quadrupole moment, octupole moment and hexadecapolar moments as given in colligative table for Glycine properties. All different types of moments are calculated in Debye and using field-independent basis as done theoretically by the Gaussian package program Figure 1. The third output result is the infrared bands for Glycine in water which given in Figure…. This Figure contains at least 16 peak ranging from very weak to very sharp. The theoretical program gave 24 bands with three imaginary negative values for the different frequencies of stretching and bending in Glycine compound Figure 2. NMR calculated spectra gave the necessary peaks. The next part gives some characteristics of Glycine based on the moment of inertia including its energies values of 170.45, 424.52, and 573.02 atomic units as explained in colligative Figure 2. 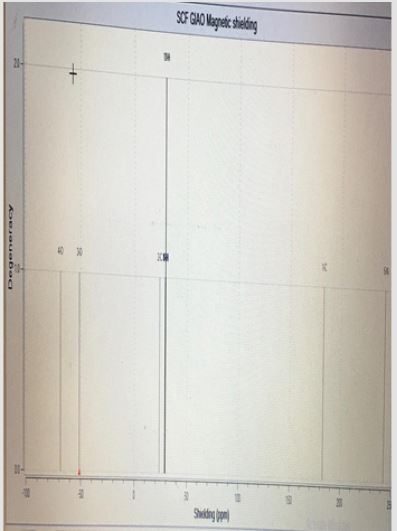 The zero-point energy is calculated using non-imaginary frequencies. Glycine molecule is an asymmetric top, rotational symmetry number is 1, rotational temperatures are 0.5081, 0.204 and 0.151 in kelvin, rotational constants are 76.55, 20.429in GHZ. The zero-point vibrational energy is 226.21 kJ/mol since all the thermochemistry and thermodynamic data depend on Glycine structure Table 2. All thermal and thermodynamic parameters evaluated include the zero-point energy, because the first line gives the correction to different types of energies. The next part in the colligative table listing different individual contributions to internal thermal energy (Ethermal), heat capacity at constant volume (CV) and entropy (S). For every low different frequency mode, there will lines label (vibration 1), (vibration 2) give contribution of the values estimated with source of error. Finally, table gives the different partition function. The line Bot for vibrational partition function with zero energy, V=0 computed with zero being first vibrational level, V=1, computed with first level being first vibrational level and so on. All thermodynamic and thermal properties calculated for glycine in water prove its high activity as very reactive agent. It is clear from Table…. for the NBO (Natural bonding orbitals) net charge zero and individual charges in each atom in the molecule (Table 3 and Figure 3). 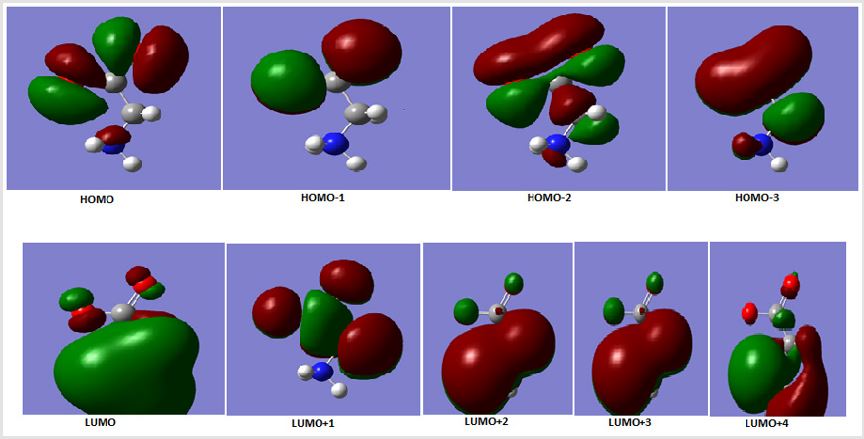