Malignant disease in pregnancy is rare and occurs in approximately 1:1000 cases. Most frequent in pregnancy are malignant melanomas (2,6:1000), Hodgin-lymphomas (1:1.000- 6.000), breast cancer (1:3.000-10.000) and cervix carcinomas (1,2:10.000). Ovarial cancer is particularly rare occuring in only 1-2 per 100.000 pregnancies [1-2]. Extrapolated to Germany, 6-12 patients per year are therefore expected, underlining the low incidence. Treatment of malignomas in pregnancy is usually similar to therapeutic measures in non-pregnant women, mainly due to the fact that results of controlled studies in pregnancy hardly exist. For the more frequent malignomas there is registry data which can be consulted. Yet for the uncommon ovarial cancer- especially in cases with primary metastases- only case reports are available.

A 33 year old patient in the 11th week of pregnancy consulted the emergency department of our tertiary teaching hospital with a swelling of the left arm. While ultrasound of the subclavian vessels could exclude a thrombosis, marked swelling of the left cervical lymph nodes was found. Blood chemistry remained inapparent. Surgical removal of a lymph node for histopathological assessment led to identification of metastatic estrogene positive adenocarcinoma . Gynaecological evaluation in lee of primary tumour search revealed a cystic process in the Douglas cavity, with otherwise inapparent gravidity. By means of laparoscopic adnexectomie we could verify a low grade serous ovarial carcinoma based on a borderline tumour of the right ovary. Staging with MRI of the chest and abdomen showed a stage cT3a, cN1, pM1, FIGO IVB disease, with paraaortal abdominal, thoracal and cervical lymph node metastases. After hearing second and third opinions as well as thorough elucidation of the risks and complications that may be expected, the patient decided to obtain pregnancy and perform primary systemic chemotherapy.

After 4 cycles of Carboplatin/Pacliaxel (AUC5/175mg/m2 KOF, q3w) a good response of the cervical lymph node metastases as well as a decline of the tumour marker Ca 12-5 was observed (Figure 1). Due to a intrauterine growth retardation (IUGR) of the otherwise inconspicuous fetus, therapy was deescalated to Carboplatin mono (AUC5, q3w). The patient developed progressive neurological symptoms in form of flickering vision. Pre-eclampsia was excluded and fetal lung maturation was induced using 2x12mg Betamethason i.m. in the 28. week of pregnancy. After the second administration of Carboplatin mono the patient reported progressive headaches and visual disorders. An MRI of the skull showed multiple small cerbral infarctions, interpreted as paraneoplastic reactions. 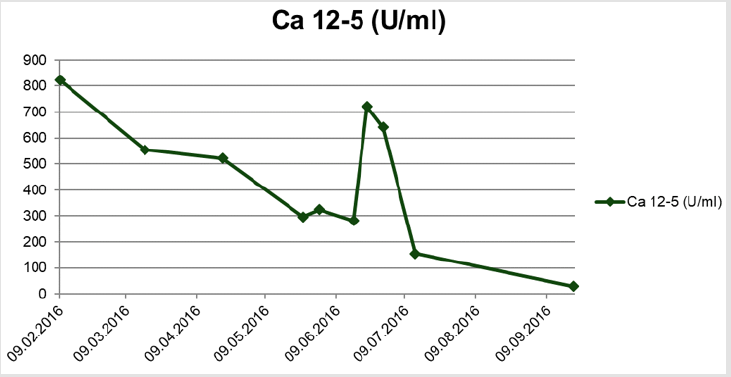 Despite effective anticoagulation, neurological symptoms progressed and a manifest eclampsia was diagnosed. In the 32+0 week of preganancy the patient gave birth to a 1460g girl by caesarian section. Apart from a persistent arterial duct, the infant was healthy and birthgiving itself without complications. Postpartal staging showed a complete remission of the lymphadenopathy. 3 weeks after birth we performed a stage adjusted surgical intervention with modified posterior exenteration including hysterectomy, adnexectomy left, resection of the sigma, peritonectomy of the pelvis, diaphragma and colon, appendectomy, infragastrical omenectomy as well as pelvical and paraaortal lymphonodectomy. HIPEC with Cisplatin 50mg/m² was performed in this same procedure. A postoperative skull MRI showed complete remission of the parenchymatous changes of the brain, which were retrospectively interpreted as a posterior reversible encephalopathic syndrome (PRES). Consecutively the patient received 3 more cycles of chemotherapy with Carboplatin/Paclitaxel and Bevacizumab over a time span of 30 months. Furthermore, a Letrozol maintenance therapy to consolidate the success of treatment was performed. Follow up 3 years after primary diagnosis with complete staging could not detect local or metastatic tumour recurrence. The tumour marker Ca 12-5 was within the standard range.

Figure 2: Laparoscopic image of the ovarial tumour (right) on diagnosis.

In analogy to therapeutic regimens for other malignant tumours in pregnancy, the strategy for ovarial carcinoma depends on the stage of pregnancy as well as the degree of proliferation and dissemination. Pregnant women should not be denied any therapeutic options that could improve the patients prognosis. Nonetheless, the prognosis of the fetus must also be adressed. In principle operative and cytostatic chemotherapies are both possible. In case of diagnosis of ovarial cancer in the first trimenon, the patient needs to decide whether pregnancy should be terminated or not. Comprehensive consultation concerning mother and child welfare and prognosis is essential. The mother must know, that stage adjusted therapy may lead to infertility. In cases where tumour debulking is attainable without hysterectomy, adequate operative staging while preserving pregnancy is possible. In dual sided adnexectomy in the first trimester a transient substitution with progesterone is suggested. In the ensuing second and last trimester, the secretion of hormones from the placenta is sufficient to preserve pregnancy [3] (Figure 2).

Perioperative risk is increased due to gestation-associated physiological adaptations such as increased cardiac output and oxygen demand, tendency to thrombosis and increased perfusion to genital organs. As from the second trimester, anatomical adaptations can make surgery technically demanding. Should surgical cytoreduction during pregnancy be impossible or associated with an unreasonably high risk, the same regimen used for non-pregnant patients, namely neoadjuvant chemotherapy, is a viable path till delivery [4] (Figure 3).

For pregnant patients, all cytostatic drugs are classified as substances with a risk category D. Some experience exists for the treatment of breast cancer and hematological malignomas. The risk of fetal deformities seems to depend on the cytostatic substance as well as the trimester in which the fetus is exposed: deformities after application of alcaline substances in the first trimester have an incidence of 16%, falling to 8% in the second trimester of pregnancy [5]. The well established substances carboplatin and paclitaxel, used as first line treatment for ovarial cancer, seem to be tolerated fairly well as from the second trimester. While carboplatin has induced complications such as IUGR, premature birth as well as under- and overproduction of amniotic fluid, application in the second and third trimester has not been associated with fetal malformations [6] (Figure 4).

According to the literature, there seems to be only little experience with taxanes. Studies suggest that complication rates are low [7]. Effects of bevacizumab remain wholly unknown and from a theoretical approach seem contraindicated. Timing of chemotherapy is particularly important the closer one gets to the anticipated date of birth. Cytostatically induced fetal and maternal myelosuppression therapy 3 weeks or less prior to birth may have profound implications. Also, treatment directly before birth may lead to complications for the newborn due to the disturbed placentar elimination and impaired capacity for renal and hepatic clearing. Premedication to chemotherapy should incude well established medication like MCP, dimenhydrinate or meclozine. In contrast to NK-1-inhibitors, only limited experience exists with odansetrone in pregnancy. In case of steroids, preference should be given to physiological glycocorticoids such as prednisolone. Placental enymes are capable of inactivating >90% of the substance, while 9-α-fluorinated glycocorticoids (dexamethasone, betamethasone) result in significantly higher fetal plasma levels. When determining delivery time, it must be appreciated that despite all known and anticipated risks, iatrogenic prematurity is associated with higher infant complication rates than the intrauterine exposition to cytostatic medication [8].