Cytosolic sulfotransferases (SULTs) catalyze the sulfation of endogenous and xenobiotic hydroxyl-containing compounds [1]. Sulfation of xenobiotics is mainly associated with detoxification: sulfate esters are more water-soluble and more readily excreted by drug transporters than the parent compounds. SULTs are mostly studied as phase II drug-metabolizing enzymes. However, some SULTs show exclusive endogenous substrate specificity; sulfation is widely observed in various biological processes. The biological activities of various biological signaling molecules, including hormones (hydroxysteroids, thyroids, and glucocorticoids) and monoamine neurotransmitters, can be altered through sulfation. Sulfation normally leads to the inactivation of biological signaling molecules, as the sulfated forms are typically unable to bind to specific receptors. Sulfatases catalyze the de-sulfation [2]; together with SULTs, they regulate the functions and activities of various molecules.

Human estrogen sulfotransferase, SULT1E1, catalyzes the sulfation of estrogens in low nM concentration range. It is one of the key enzymes for the regulation and metabolism of estrogens [3]. Estrogens are known for their proliferative effects on estrogen sensitive tissues, resulting in tumorigenesis. Estrogens exist in vivo primarily as inactive sulfated forms [4]. SULT1E1 has been reported to play important roles in mammary cells for the regulation of estrogen activities [5]. Active free estrogens must be inactivated (sulfated) in estrogen-targeting tissues after their biological actions. Unregulated estrogen activities in estrogen-targeting tissues will lead to biological consequences. The majority of human breast cancer cell lines are known to express extreme low levels of SULT1E1 compared to normal human mammary epithelial cells [4]. Stable expression of SULT1E1 in human breast cancer cells has been reported to significantly inhibit cell growth at physiologically relevant estradiol concentrations [6]. It has been suggested that loss of SULT1E1 expression in the transformation of normal breast tissue to breast cancer is an important factor in increasing the growth responsiveness of preneoplastic or tumor cells to estrogen stimulation [6], and that factors involved in the stimulation of the SULT1E1 could provide new possibilities for the treatment of patients with hormone-dependent breast and endometrial cancers.

Naturally occurring flavonoids represent a major class of secondary metabolites in plants. They are widely distributed in plants including vegetables, fruits, and beverages such as tea, coffee, and wine [7]. Flavonoids are major functional components of many herbal drug preparations that have been used for thousands of years [8]. They are also major components of many modern dietary supplements [9]. These compounds are important healthenhancing food components and dietary supplements. Although they inhibit or kill many bacteria, they are much less toxic to humans and animals. Flavonoids interact with specific enzymes [10], bind to specific nuclear receptors [11], and scavenge free radicals [12]. In recent years, more and more reports have demonstrated that flavonoids bind to different kinds of nuclear receptors, including those that regulate drug-metabolizing enzymes, such as peroxisome proliferator-activated receptors (PPARs) [13], steroid hormone receptors (SHRs), and estrogen-related receptors (ERRs) [14]. The high binding affinity of flavonoids to various proteins is due to their special ring structures and multiple hydroxyl groups [15]. Our laboratory has investigated the regulation of human and rat SULTs by various flavonoids [16-19]. Our results demonstrate that some flavonoids strongly regulate hydroxysteroid SULTs; some flavonoids regulate SULT expression in reverse directions in hormone-producing tissues and hormone-targeting tissues [16]. Hydroxysteroid SULTs are much more sensitive to flavonoid regulation in hormone-producing and hormone-targeting tissues than in drug metabolizing tissues such as the liver in rats [16]. These results suggest that flavonoids may play important roles in the endocrine system by regulating SULTs.

MCF-7 cells (a human estrogen receptor-positive breast cancer cell line, ATCC number: HTB-22) obtained from American Type Culture Collection (Manassas, VA) were grown exactly as instructed by the supplier. 100 pg/ml estradiol was added to the medium for experiments as indicated in results section. Cells were maintained in a humidified atmosphere of 95% air and 5% CO2.

Estradiol sulfation activity by MCF-7 cell homogenate (9000 g supernatant) was determined by the radioactive assay method as described previously [22,23]. Briefly, sulfation activity was determined in a reaction mixture containing 50 mM Tris buffer, pH 6.2, 10 μM PAPS. [2, 4, 6, 7-3H (N)] Estradiol (diluted to 1.0 Ci/mmol; 0.15 μM final concentration) was used as substrate. 100 mg of MCF- 7 cell homogenate was added to start the reaction. After 30 minutes incubation at 37°C in a water shaker bath, the reaction was stopped by adding 250 μl of 0.25 M Tris, pH 8.7. Extraction procedure was performed twice by adding 0.5 ml of water-saturated chloroform each time. After final extraction, 100 μl of aqueous phase was used for scintillation counting. The data shown in the Figure 3 are the average of three determinations of each time duplicated experiments.

MCF-7 cells were grown in 10 cm plates until reach 80% confluency. Then the cells were treated with drugs and cultured for 48 more hours. MCF-7 cell homogenate (9000 g supernatant) (30 μg) were subjected to Western blot analysis as described in our publications [24-26].

MCF-7 cells were grown in 96-well plates (100 ml/well) until reach 80% confluency. Then the cells were treated with drugs as described in results section and figure legends. After the treatments and 48 hours culturing, MTT is added to each well (final 0.5 mg/ml, stock solution 50 mg/ml in ehtanol) and incubated for 2 more hours at 37 ̊C. After the incubation, medium is removed and the resulting formazan crystals are washed with PBS, then 200 ml of isopropanol is added to each well to dissolve the resulting formazan crystals. The plate is shaken on a rotating shaker for 5 minutes. Optical density is recorded at 540 nm using the POLARstar OPTIMA multi detection microplate reader (BMG LABTECH) in our laboratory. The cell proliferation of the control cells is considered as 100%, with treated cell proliferations expressed relative to the control. Six wells of isopropanol control reading average is subtracted for all experimental readings for each time of experiment.

For statistical analysis, an unpaired Student’s t-test was used for the comparison of values for a treated sample to that of the vehicle- treated sample to calculate the significance of difference. A twoway analysis of variance between groups (ANOVA) was performed to assess the significance of correlation for the inhibition of cell proliferation. Chou-Talalay method was used for the calculation of synergy for combined drug studies. 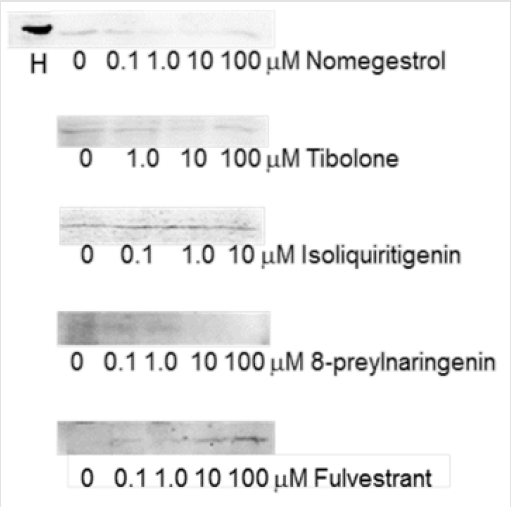 We have studied flavonoid regulation of human SULT1E1 in MCF-7 cells. Our Western blot results suggest that some flavonoids significantly induce SULT1E1 in MCF-7 cells in the concentration range from 100 nM to 100 μM in a concentration-dependent manner. Figure 2 shows the results for quercetin and genistein induction of SULT1E1. These two flavonoids are more potent inducers than other flavonoids that we have studied. No estradiol was added for the results shown on the left, 100 pg/ml estradiol was added in the medium for the results shown on the right. Our results suggest that estradiol has no effect on flavonoid induction of SULT1E1. This agrees with reports that estrogens do not regulate SULT1E1 gene expression [28]. 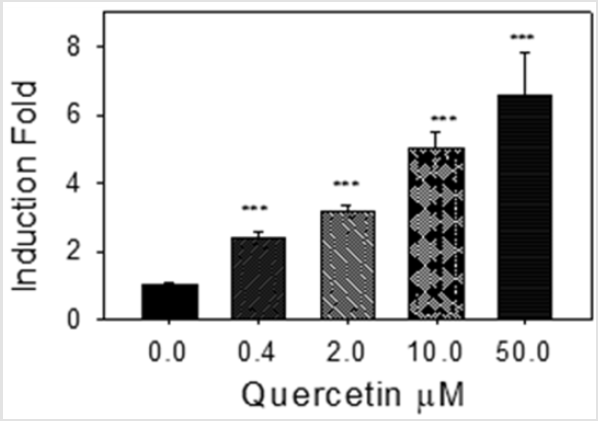 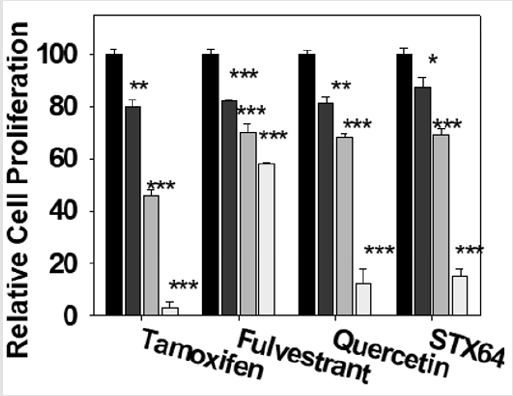 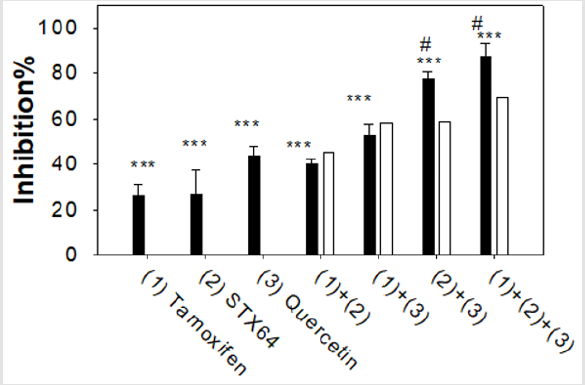 Figure 5: Combined effect of drugs on MCF-7 proliferation. Assays were done similar as described in Figure 4 Tamoxifen 5 μM, STX64, 10 μM, quercetin 30 μM. Experiments were done in sextuplicate and were repeated 3 times. ***: p<0.001 for the cell proliferation inhibition significance compared to the vehicle treated cells. #: p<0.001 for the combined effect compared to the calculated simple additive effect.

Our laboratory has investigated flavonoid regulation of steroid SULTs in hormone-producing and hormone-targeting tissues [16-19] and the determination of the mechanisms driving the regulation [14,19,29]. Results reported here suggest that certain flavonoids strongly induce human SULT1E1 in MCF-7 cells (Figure 2). SULT1E1 inducer quercetin inhibits MCF-7 cell proliferation. Most importantly, our results suggest that SULT1E1 inducer show an additive effect with ER blocker and synergistic effect with STS inhibitor for the inhibition of MCF-7 cell proliferation. Our results suggest that SULT1E1 inducers can be used for the therapy of estrogen-dependent breast cancers or other estrogen-dependent cancers. These inducers may also be used for the prevention of breast cancers for women who have high risk for breast cancers. Estrogens are known for their proliferative effects resulting in tumorigenesis in certain tissues. The majority of breast cancers are estrogen-dependent (or estrogen-sensitive). Current estrogen blocking drugs include antagonists of estrogen receptors and inhibitors of estrogen synthesis enzymes such as aromatase and steroid sulfatase. However, estrogen inactivation enzyme SULT1E1 has not been targeted to develop estrogen-dependent cancer drugs. There are no literature reports on studies of SULT1E1 gene induction in breast cancer cells. SULT1E1 is crucial for in vivo control of estrogen activities. Majority of human breast cancer cell lines express extreme low levels of SULT1E1 compared to normal mammary cells (Text Figure). Therefore, the up-regulation of SULT1E1 gene may provide novel possibilities for the treatment/ prevention of patients with estrogen-dependent breast and endometrial cancers.

Naturally occurring flavonoids are bioactive food components. They are major functional components of many herbal drug preparations and many modern nutritional supplements. They are inexpensive and generally nontoxic. Our results suggest that some flavonoids can induce human SULT1E1 gene expression, and this increased SULT1E1 expression inhibits MCF-7 cell proliferation. Flavonoids could be used as co-drugs for estrogen-dependent cancer treatment. Our results provide essential information for future research, which may lead to creating innovative approaches for the treatment (and prevention) of estrogen-sensitive cancers and may lead to the discovery of novel drugs.

The authors are grateful to Dr. David P Ringer (American Cancer Society) for the generous gift of anti-SULT1E1 antibody.

The authors declare that they have no conflict of interest.

No human subjects or animals were used in this study.

nformed consent was obtained from all participants included in this study.