Marine leech, Z. argumensis is a parasite with a direct life cycle on the fish body. It infests most of the cultured species (Epinephelus coioides, E. lanceolatus, E. fuscoguttatus, Lutjanus johnii, L. argentimaculatus, L. erytropterus, L. stellatus and Lates calcarifer) and under temperature of 27oC, it needs 16 to 17 days to complete the life cycle [1]. Marine leech infestation can be reduced through freshwater bath by removing/killing the adult and juvenile or reducing the hatching rate of the juvenile from the cocoon. Freshwater bath is commonly used as a prophylaxis to minimize parasitic diseases in marine fish culture. Practically, freshwater bath works by rupturing the cell membranes of the parasites with influx of freshwater via osmosis. However, it could be detrimental to the fish if they are already under stress from being infected and the sudden change in salinity may kill the fish instead. Effectiveness of freshwater baths has been reported on cultured marine fish infected with sea lice or capsalid monogenean species [2,3].

In Japan, routine freshwater bathing at intervals of 14 days was introduced to amberjack (Seriola dumerili) and yellowtail (S. quinqueradiata) cultured in net pens in order to prevent body monogenea (Neobenedenia girellae). Freshwater bathing for 2 to 4 hours was also reported being able to reduce amoebic gill diseases in cultured altlantic salmon [4,5]. Leong et al. [6] reported 2-5 minutes freshwater dip could dislodge the body monogenea from the host fishes. In Malaysia, it has been used and included in fish health management by marine aquaculturist in tropical country as it is the simplest and fastest way to reduce the numbers of protozoan, flukes and lice that parasitized on marine fish or newly acquired fish. However, no documentation on the effectiveness of freshwater bath against the marine leech even through farmers have been practising it. The present study aims to determine the survival of adult, juvenile and percentage hatching in juvenile marine leech on cocoon aged day 1, 3, 5 and 7 in freshwater bath. The information is important as it can be used as a guideline for farmers to carry out the control measure of marine leech infection in tiger grouper.

Marine leech Z. arugamensis were procured from the fish cages at Pulau Jerajak, (Latitude 5°18’57.67”N and Longitude 100°18’30.48”E) Penang in Peninsular Malaysia. A tiger grouper (15 to 340g) infected with marine leeches were collected from fish cages and were placed in a petri dish containing seawater from the cage and leeches were removed individually by hand. The adult leeches were transferred into a container with filtered sea water from the site and brought back to the laboratory for use in survival experiment and establishment of their life cycle for juvenile specimen based on Kua et al. [1]. Briefly, the active adult leeches were chosen and placed in 500 ml jar with filtered seawater at 28 parts per thousand (ppt) salinity obtained from the sites and incubated at 27oC for 24 hours. Adult leeches were removed after 24 hours leaving the deposited cocoons on the glass wall or bottom of the jar for another 7 days to complete of the juvenile stage. Water was exchanged 50-60% every 2 days with new sterile filtered seawater. During incubation, the deposited cocoons were kept in an incubator at 27oC for 7 - 8 days. After Day 7, the juvenile hatched from the cocoon and ready for the survival experiment in freshwater bath.

Adult marine leeches were bathed with freshwater (250 ml) for duration of 5 to 10 minutes and their movement recorded immediately. Marine leech were transferred into seawater with 28 ppt salinity (250ml) when no movement was seen. An uninfected tiger grouper (2 - 3 cm) was placed in for infection study. Time and number of leeches showing movement and infecting the fish were recorded. The same experiment was conducted for juvenile marine leech.

The cocoons were obtained from the tiger grouper infected with marine leech in floating cages. A total of 100 clean glass slides were placed parallel each side of the tray and hung inside the cage. After 24 hours, approximately 80 slides containing cocoons on it were removed and placed into aquarium tank with seawater (28 - 30 ppt) from the cages and aerated. These slides were left in the aquarium tank and removed daily for the freshwater bath treatment. The slide containing more than 3 cocoons were chosen for the freshwater treatment. A total of 8 slides with cocoons aged 24 hours were taken out from the aquarium tank and subjected to freshwater bath with exposure time of 0 (control), 5, 30 and 60 minutes running in duplicates. The slides (each with 6 cocoons) were immersed in freshwater for 5 minutes in conical tube (50ml), then replaced it into conical tube (50ml) containing seawater from cages. The seawater was changed daily. The numbers of the cocoons on each slide were recorded before bathing in freshwater. The numbers of the hatched juvenile were also recorded for up to 14 days. The hatching percentages were based on the number of juvenile hatched divided by the number of cocoons exposed to freshwater. The above experiment was repeated for the cocoon aged day 3, 5 and 7. The experiment was terminated after day 14.

The hatching percentage of juvenile marine leech was analysed using Anova-one way with SPSS software. Results were considered siginifcant if p< 0.05. Tukey HSD was used for comparison of means. 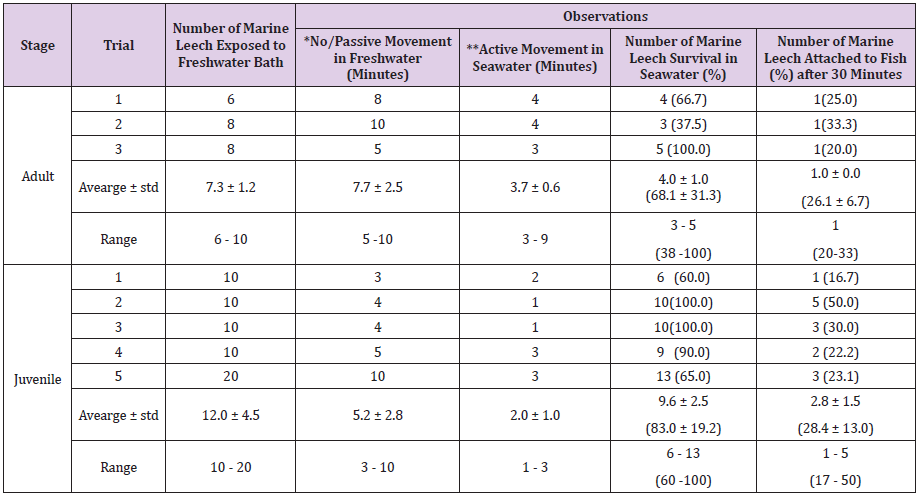 Note: *No/passive movement: no movement of body but one or both suckers move. **Active movement: leech swim up and down. 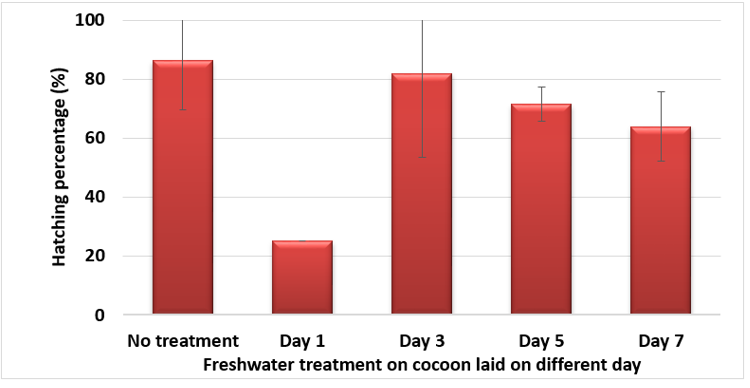 Hatching percentage in the Day 1 laid cocoon treated with freshwater was significantly lower and placed in an individual group after tested with Tukey HSD. However, no significant difference observed between the hatching percentage of cocoon against different cocoon laid time of day as compared with exposure duration (5, 30 and 60 minutes). This indicated that exposure time of 5,10 and 30 minutes of coccon in freshwater did not influence the hatching percentage of juvenile. Cruz-Lacierda, et al. [7] reported that regular freshwater bath treatment was not effective to kill leech in grouper as compared with 50ppm formalin bath treatment for one hour. However, formalin treatment was not popular among the farmers of floating cages. Instead, most cage farmers in Malaysia claimed that freshwater bathing could reduce the marine leech infection effectively in marine cultured fish. This was confirmed by less number of adult marine leech attached on the body surface of the treated fish. The present study showed that adult and juvenile of marine leech were not totally killed during the 5 to 10 minutes bath in freshwater. And the re-infection of marine leech will occur at a lower rate. This indicated that freshwater bath could reduce the adult leech population but a routine freshwater bathing at intervals of 14 days was needed to prevent marine leech infection.

Hatching rate of juvenile from the cocoon was 83.87% under laboratory condition and 17 - 18 days needed to complete their life cycle [1]. This high percentage of hatching juvenile will increase the population of marine leech in floating cages and thus increasing the risk of marine leech infection. Burreson, et al. [8] reported that cocoons of leech are very resistant to chemical treatment, but it can be eliminated by thorough drying of culture facilities. In floating cages, most farmers in Southeast Asian used high pressurized water jet to clean and remove the barnacles that attached to the net. This washing also helps to remove the attached cocoon from the net, but it does not break the life cycle of marine leech as the water flows back to the same culture site. The present study showed that lower juvenile were hatched from cocoon treated in freshwater bath on cocoon aged Day-1 as compared with cocoon aged Day-3, 5 and 7. The results also indicated that freshwater bath should be applied within 24-hours once cocoons were seen in the net or any substrate in the cages. Upon delaying the freshwater bath, a higher infestation of marine leech is expected. Exposure time regardless of 5, 10 30 or 60 minutes did not influence the hatching percentage of juvenile.