Purpose: Opioids are the standard of care and often the most effective in treatment of pain. New intravenous formulations of Acetaminophen (IVA) may help decrease the number of opioids needed in the post-operative period therefore decreasing potential opioid side effects.

Methods: In a case control model, patients receiving intravenous acetaminophen and opioids were compared to patients receiving opioids alone. The patient groups were further broken down based on patients’ preoperative opioid usage. Morphine equivalent (ME) doses were then compared as well as length of stay (LOS), intensive care length of stay (ICU LOS), adverse drug reactions to opioids and IV acetaminophen, and surgical complications.

Post-operative pain management in spinal surgery is often a challenge. This is further complicated by the large proportion of patients with chronic pain and the significant number of patients using opioid analgesics preoperatively [1]. Post-operative inadequate pain control is associated with increased lengths of stay and increased morbidity [1] including the development of chronic pain [2]. The cornerstone of post-operative analgesia has long been opioids, however, despite their potent analgesic properties, opioids are plagued by a host of side effects. Opioids cause gastrointestinal and respiratory depression and, of added importance in the neurosurgical patient, sedation [3]. These adverse drug effects may result in increased lengths of stay and more costly hospital stays. A possible solution to the problems of post-operative analgesia is multimodal pain management and the use of supplemental non-narcotic analgesics such as NSAIDs [4]. In 2010, intravenous acetaminophen was approved in the United States and has been studied in a variety of surgical populations with mixed results [5-7].

Although the mechanism of action of acetaminophen is incompletely understood, it is thought to act through inhibition of COX-1 and COX-2 dependent pathways. Furthermore, there is now evidence that other mechanisms involving COX-3 inhibition and activation of capsaicin and cannabinoid receptors may also play a role in its analgesic properties [8,9]. Acetaminophen is not associated with the side effects of opioids and NSAIDs and compared to oral or rectal formulations; intravenous forms boast superior pharmacokinetics, with faster onset of action and more predictable plasma and CSF concentrations [5,10,11]. However, the intravenous formulation is costly, and as such its effectiveness with regards to both its analgesic qualities and its role in reducing opioid consumption and opioid related side effects must be closely examined [7,12-17]. Although initial studies repeatedly demonstrated that IV acetaminophen results in lower visual analog pain scores (VAS) than placebo, its effect on opioid consumption has been less clear [14,17]. While some studies have shown IV acetaminophen use has reduced post-operative opioid use, many studies in a variety of non-spine surgical populations have demonstrated no difference in opioid consumption between patients receiving IV acetaminophen and those not [13,15,16,18- 21]. The literature in spinal patients has shown mixed results with regards to the effect of IV acetaminophen on opioid consumption and opioid related side effects [7,12,22-24]. In the current study, we seek to help build a consensus on the role of IV acetaminophen in the management of post-operative pain following spinal surgery.

This was a single center retrospective case-control study. The electronic medical records of patients included in the study were examined after proper approval from the institutional IRB and the relevant data was obtained an analyzed.

All patients undergoing first time spinal surgery by a single surgeon at Temple University Hospital between 12/2011 and 8/2015 were included in the preliminary subject list. Patients were excluded if they had previous spinal surgery within the prior thirty days, if they were discharged on the same day as their surgery, or were on extremely high levels (Morphine Equivalent Doses greater than four standard deviations above the mean) of chronic opioid narcotics prior to surgery for cancer palliation. Furthermore, patients undergoing minimally invasive surgery were excluded because these patients only rarely received IV acetaminophen and therefore the treatment group was underpowered for any analysis. Patients were retrospectively divided into two groups for analysis: those who received intravenous IV acetaminophen post-operatively and those who did not. IV acetaminophen was added to our institution’s formulary in late 2013. Prior to that date, no patients received IV acetaminophen, and following its addition to our formulary, the majority of patients received IV acetaminophen following spinal surgery. Patients in the experimental group received 1g IV acetaminophen every six hours for either twenty four or forty eight hours. Patients discharged prior to forty eight hours post-op received only twenty four hours of treatment with IV acetaminophen, whereas patients that stayed longer than forty eight hours received forty eight hours of IV acetaminophen. For subset analysis, patients were further divided into those receiving surgery on the cervical, thoracic or lumbar spine. For procedures which spanned more than one vertebral group, such as T11-L3, the patient was placed in the cohort corresponding to the vertebral region in which the majority of their case was performed. Baseline demographics were collected including age, sex, and pre-operative opioid use.

The primary study endpoint was opioid use over the first twenty four hours post-operatively. To assess and standardize opioid use, doses of all opioids administered were converted into their morphine equivalents (ME, mg/day). For all oral opioids, doses were converted to an equivalent intravenous dose based on the drugs bioavailability. The morphine equivalents of all opioids administered within twenty-four hours of the conclusion of the surgery were totaled and recorded. The study examined several secondary endpoints. These were opioid use during twenty four to forty-eight hours post-op, length of stay (LOS), intensive care length of stay (ICU LOS), adverse drug reactions to opioids and IV acetaminophen, and surgical complications.

For all continuous variables, significance was determined by a two-tailed Student’s T-test. For categorical values, a Chi-square test was performed. For binomial variables, a z-test of proportions was performed. 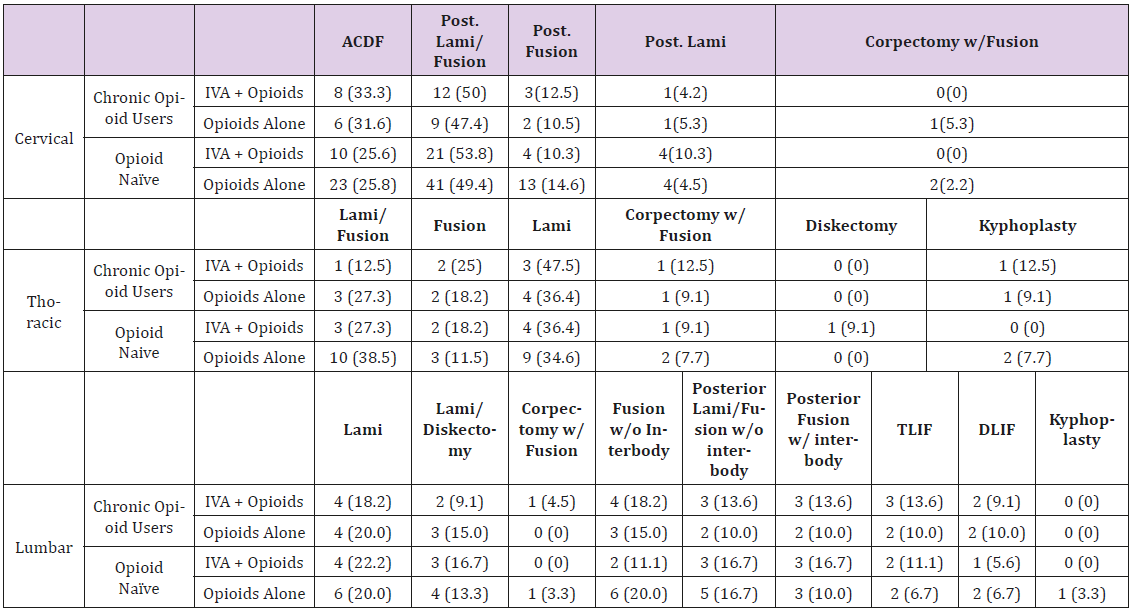 A total of ninety patients underwent surgery to the lumbar spine. Forty patients were in the treatment group with an average age of fifty-five (55.28±2.38). Fifty percent (50.00%) were female. Fifty patients were in the control group with an average age of fiftytwo (52.84±2.32). Forty four percent were female (44.00%). Fifty five percent of patients in the treatment group were taking opioids preoperatively compared to forty percent of patients in the control group (55% vs. 40% [p=0.16]) (Table 1). Lumbar procedures included posterior laminectomies, posterior laminectomy, posterior lumbar interbody with posterior fusion, transforaminal lumbar interbody fusion, direct lateral interbody fusion, and kyphoplasties. The case breakdown was not significant amongst groups (Table 2). 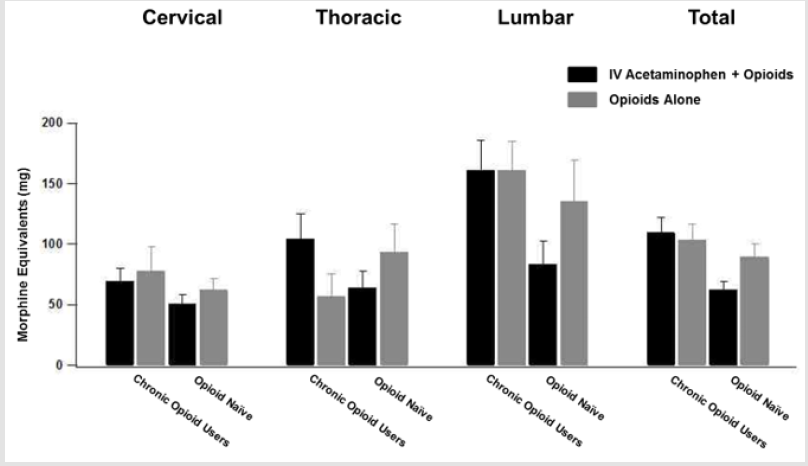 Figure 1: Morphine equivalent doses for patients within the first 24 hours post op. Cohort break down and spinal segment of surgery is shown 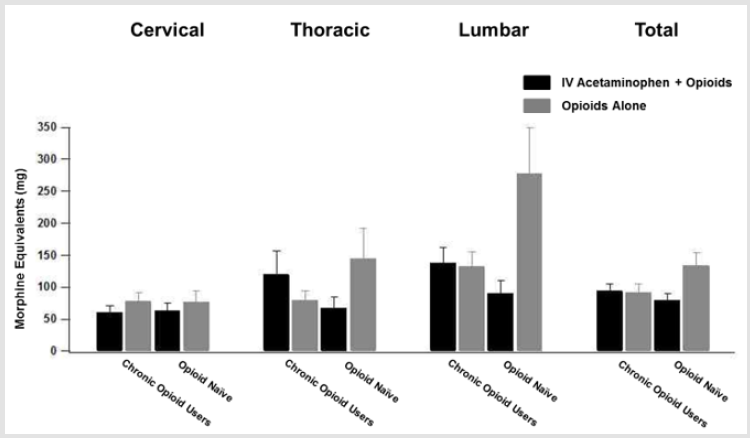 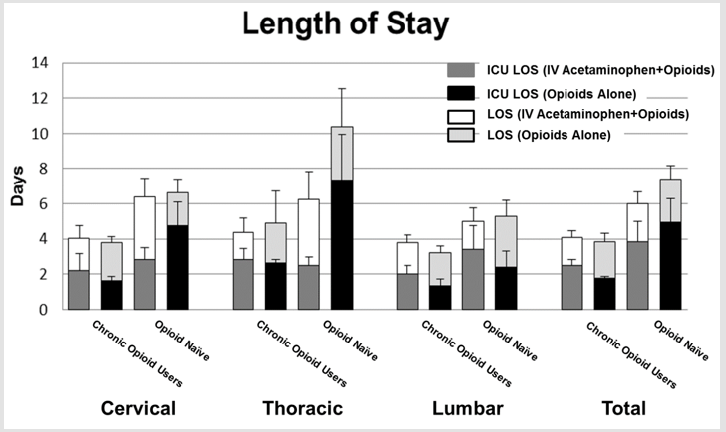 The role of IV acetaminophen in the management of postoperative pain in patients undergoing spinal surgery is still be fully evaluated. In our study, we observed that IV acetaminophen did not significantly affect post-operative opioid use in either the first twenty-four hours or the subsequent twenty-four. Furthermore, no difference was observed in LOS or ICU LOS. This trend was repeatedly observed in each subset of patients examined, even when controlling for the long-term use of opioid narcotics prior to surgery. Similarly, no significant difference was observed between the treatment cohort and control patients with regard to adverse drug effects and surgical complications. Our study is the largest and most comprehensive to date to examine IV acetaminophen in spinal patients. Although each subset of patients was of moderate size, the same findings were repeatedly demonstrated across each population examined. This provides evidence that IV acetaminophen may not be medically or economically worthwhile as a supplement to traditional opioid narcotics for post-operative pain. However, it should be noted that our study did not examine subjective pain such as VAS scores.

In studies where VAS scores have been assessed, it has been observed that the addition of IV acetaminophen to opioid narcotics results in lower subjective pain, even when the opioid consumption has not been different [7,12,14,16,20,22]. In a time when patient satisfaction is increasingly important, the effects of IV acetaminophen on subjective pain should not be overlooked. Furthermore, there is evidence that inadequate pain control during the postoperative period may play a role in the development of chronic pain syndromes [2]. This suggests that even in the absence of an objective measure of post-operative pain such as opioid consumption, it may be beneficial to supplement analgesia with IV acetaminophen. Our study was limited by its retrospective nature, and by the fact that post-operative opioids were not standardized. By this, it is meant that patients received different narcotic medications as well as different formulations. We attempted to control for this by converting all intravenous formulations to their oral equivalents based on their bioavailability. We then converted all narcotics to morphine equivalents based on their known potencies. And while this is, admittedly, not a perfect system, it allows for an adequate comparison. In conclusion, our study demonstrates that IV acetaminophen is ineffective in reducing postoperative opioid consumption in spinal patients. Furthermore, it does not reduce length of stay or the incidence of adverse drug effects associated with opioids. However, there may still be a role for IV acetaminophen according to evidence that it improves subjective pain.

Purpose: Opioids are the standard of care and often the most effective in treatment of pain. New intravenous formulations of Acetaminophen (IVA) may help decrease the number of opioids needed in the post-operative period therefore decreasing potential opioid side effects.

Methods: In a case control model, patients receiving intravenous acetaminophen and opioids were compared to patients receiving opioids alone. The patient groups were further broken down based on patients’ preoperative opioid usage. Morphine equivalent (ME) doses were then compared as well as length of stay (LOS), intensive care length of stay (ICU LOS), adverse drug reactions to opioids and IV acetaminophen, and surgical complications.