a) CH patients have worse outcomes compared with CI patients.
b) A cutoff point of %EI was determined at 75% of the target to maximize better clinical outcomes in CH patients.

Stroke is the third leading cause of death [1]. Among stroke subtypes, cerebral ischemia (CI), cerebral hemorrhage (CH) have directly insult to cerebral neurons, whereas subarachnoid hemorrhage does not. Comparing outcome of CH with CI, patients with CH have been reported to have higher in-hospital mortality [Odds ratio = 2.9] [2]. Under these circumstances, we hypothesized that CH patients have poorer outcomes compared with patients with CI and that an energy management set at 75% of target was associated with better outcome. Here, target of energy intake (TEI) was set at 25 kcal / kg of actual body weight / day according to the statement of guidelines provided by American Society for Parenter al and Enteral Nutrition [3], and European Society for Parenteral and Enteral Nutrition [4]. Then if our hypothesis was correct, then examine that the cutoff point of TEI exists to maximize better outcomes. To test our hypotheses, all data was collected and analyzed in patients with CI and CH admitted to stroke care unit (SCU) in a single tertiary institute.

All consecutive acute stroke patients, admitted to a single institution between January and June 2015, were enrolled as subjects of the study. They were divided into two groups, diagnosed with CH or CI as primary diagnosis. The exclusion criteria were:

(1) The length of stay in hospital < 7 days because the shorter stay could not enough to test an effect of nutritional support on a clinical outcome,
(2) Primary diagnosis was not CH or CI,
(3) Primary diagnosis was subarachnoid hemorrhage because it does not seem to influence focal neurological region,
(4) Missing data of height or weight.
The collected data of an individual subject were including in the following five categorized parameters:
(1) Demographics, including age, sex, body weight, body mass index (BMI, expressed in unit of kg /m2), Charlson comorbidity index (CCI) to evaluate individual comorbidity, stroke subtype (CI or CH), National Institutes of Health Stroke Scale (NIHSS) for estimation of neurological deficits. All was evaluated at admission,
(2) Blood test parameter of C-reactive protein (CRP) measured during staying in SCU,
(3) Nutritional parameters, including daily energy intake (EI: kcal / kg of actual body weight / day) for the first seven days staying in SCU. Here, when subject has discharged within six days from SCU, an average daily EI was calculated until the day before discharge from SCU. In addition, nutritional route, including oral or the others (enteral or parenteral) was also classified,
(4) Outcome parameters, including the length of stay in SCU as the primary outcome, and the highest CRP during stay in SCU, the presence of CRP ≥ 6.0 mg/dL, both as the second outcomes.
Then, the following analyses were conducted in analysis 1, and 2 (Figure 1). Given the nature of this study, the requirement for informed patient consent was considered unnecessary. 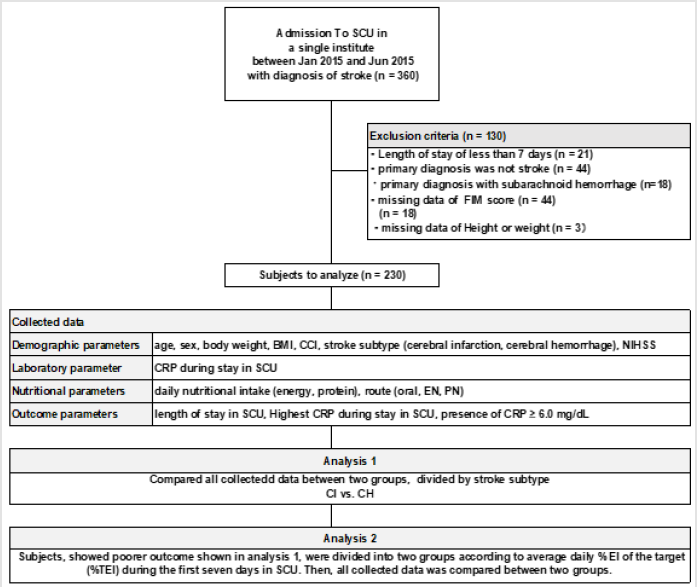 Figure 1: The flowchart of this study.

To examine our hypothesis that CH patients have worse outcomes compared with that of CI patients, all included subjects was divided into two groups according to their primary stroke subtype, CI or CH. Then, all collected data was compared between two groups to know which group show significantly poorer outcome. Here, group that showed poorer outcome were proceeded to analysis 2.

To examine our hypothesis that patients fed with %EI of the target is associated with maximizing clinical outcome in SCU, all CH subjects were divided into two subgroups by EI of % target energy (TEI), < vs. ≥ 75%, and followed by added the same analyses with the TEI set at 50% and 25%. Then, comparisons of all collected data was conducted between two subgroups to which target %EI, 75%, 50%, or 25% of %of target EI, is strongest to show significance in outcomes.

The outcome parameters in the two groups were divided into different categories and compared using the Mann–Whitney U test for continuous variables and the chi-square test or Fisher’s exact test for categorical variables. All analyses were performed using SPSS Statistics version 24 (IBM Corp., Armonk, NY, USA), and significance was examined at P < 0.05. 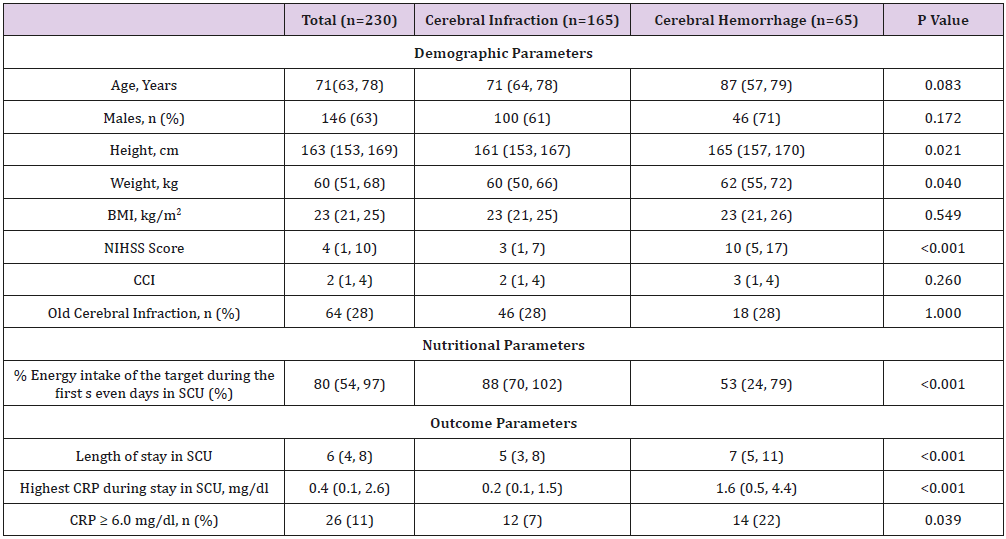 Table 1: Demographic and anthropometric characteristics, in the cerebral infarction and cerebral hemorrhage group.

As CH patients showed significantly severe and poor outcomes, CH patients were proceeded to analysis 2. This analysis showed that the cutoff point of % EI was determined at 75% to be associated with better clinical outcomes, such as significantly shorter length of stay (LOS) in SCU (Table 2). Additionally, the same differences were observed also analyses of 50% and 25% studies. From these observations, the upper limit to maximize better outcomes must be determined at 75%. In other words, CH patients fed with %EI ≥ 75% of target seemed to maximize better clinical outcomes.

In the present study, the length of stay in SCU and CRP values were applied as outcome parameters. Among them, CRP ≥ 6.0 mg/ dL was considered as a biomarker of infectious events in the older patients [5]. In analysis 1, as CH patients showed poor outcome compared with patients with CI, next question was raised whether an energy management have an impact on clinical outcome or not. As the results showed in analysis 2, CH patients managed with smaller energy ≥ 75% of TEI seems associated with significantly lower frequent of CRP < 6.0 mg/dL compared with patients fed with larger energy ≥ 75% of the target. This result could be interpreted that more frequent lower CRP in SCU and shorten LOS in SCU could be achieved by %EI ≥ 75% of the target. In these contexts, the cutoff point of %EI might exist at 75%.

Table 2: Comparison of Clinical outcomes in two groups in the cerebral Hemorrhage: <%TEI vs. %TEI ≤%TEI groups defined by their % energy intake of the target. Here, energy target was set at 25kcal/kg of actual body weight, according to E SPEN guideline

To consider how much energy intake must be associated with outcomes, we would discuss three scenarios, such as %EI set at 75%, > 100%, and meta-analysis, separately.

%EI ≥ 75% of the Target: As A.S.P.E.N. [6] and ESPEN [7] guidelines has similarly recommended to enhance an early enteral nutrition to achieve better outcome for critically ill patients, addressing attentions to the question how much energy is associated with an improvement of outcomes in critically ill settings, a study entitled the tight calorie control study (TICACOS) seems to be informative. The authors reported that critically ill patients were divided into two groups by the method to calculate EI: one was calculated by indirect calorimetry (study group) and another was set by weight-based calculation, 25 kcal/kg/day as the target (control group). The result, surprisingly contrary to our expectations, showed that the control group, setting at 25 kcal/ kg/day or 76% of the target, had significantly shorter duration of mechanical ventilation (10.5 vs. 161.1 days, p=0.03), fewer infectious complications (20 vs. 37, p=0.05), and shorter LOS in ICU (11.7 vs. 17.2 days, p=0.04) compared with study group set at 104% of the target [8].

In the other studies, underfeeding is also reported associated with adverse events, such as hypoglycemia, hypothermia, infectious complications, delayed wound healing, and an impaired immunity [9,10]. Similarly to this results, another studies also reported that < 70% energy provision was associated with significantly higher 30- day mortality compared with > 70 % of the target (31.5 vs. 11.1 %, p=0.01) [11], nutritional guideline also showed that permissive, underfeeding enteral energy provisions have reduced hospital mortality compared with targeted feeding [OR = 0.71, 95% CI. 0.50- 0.99, p =0.04] [12]. The figure of this cutoff point of EI, 75% is equal to % [(total energy expenditure (TEE) - physical energy expenditure (PEE) / TEE) [13]. From this result, our observational cutoff point might be equal to energy expenditure without physical activity, such as staying in SCU. Summing up all of results above mentioned could be interpreted that energy management with cutoff strategy set at 75% of %EI in an early period in ICU could have an impact on clinical outcomes.

Meta-Analysis of Studies Regarding %EI of the Target: Cochrane meta-analysis has concluded that there is an uncertainty on comparing effects of hypocaloric with standard energy support in length of hospital and SCU stay, infectious complications and the length of mechanical ventilation, because of very low evidence [16]. To extract a conclusive energy management in critically ill settings, although our study showed EI ≥ 75% of the target was associated with better outcomes, further analyses must be studied to confirm definitive target %EI.

The nutritional route, parenteral vs. enteral, or oral, must be considered to achieve better outcomes. In general, an enteral nutritional route has been reported to enhance immunity to prevent infectious events [17]. A nutritional management through enteral route decreases infectious complications and LOS in SCU [18]. One of the reasons to explain why enteral route did not show advantage might be that enteral hypo-perfusion might interrupt enteral digestion and absorption of the nutrients. In addition, intestinal alkaline phosphatase (iAP) has been proved to be expressed in intestinal epithelial cells to exclude endotoxin and maintain integral gut immunity [19,20]. However, iAP has never been proved its clinical roles I critically ill settings. At the present, roles of iAP regarding an effectiveness of nutritional route must be studied in the further analyses.

First, it is a retrospective study. To draw the definite conclusion of energy intake for CH patients, prospective, randomized study must be necessary. Second, the cutoff point of %EI was resulted from a single facility and validity has not yet been fully verified. Third, the sample size was also too small to draw definitive conclusion. The multi-institutional studies are warranted to resolve these limitations.

This study could draw the following two conclusions:
1) CH patients have worse outcomes compared with CI patients.
2) A cutoff point of %EI was determined at 75% of the target to maximize better clinical outcomes, such as shorter stay in SCU and lower frequency CRP ≥ 6.0 mg/dL, in CH patients

The authors appreciate the kind allowance of collection of all data including this study permitted by President of studied institute.

The approval for the study was obtained from the ethics committee of the study institution (approval number: 120066).

This research received no specific grant from any funding agency in the public, commercial, or not-for-profit sectors.

a) CH patients have worse outcomes compared with CI patients.
b) A cutoff point of %EI was determined at 75% of the target to maximize better clinical outcomes in CH patients.