Background: Impact of antispasmodics use, such as glucagon, during screening colonoscopy is largely unknown.

Conclusion: Glucagon use during screening colonoscopy leads to shorter total procedure time and improved endoscopist scope manipulation. Association between glucagon use and increased NDR is noted but requires larger studies powered to evaluate NDR as a primary outcome.

Colonoscopy is the most commonly performed procedure by gastroenterologists in the United States and in most of the developed world. It is most commonly used for detection and removal of benign polyps, neoplastic polyps and colon cancer. The National Polyp Study demonstrated a significant decrease in the incidence of colorectal cancer following endoscopic removal of polyps detected during screening colonoscopy [1]. Currently, however, only 50% of Americans at risk for development of colorectal cancer are being screened with a colonoscopy [2]. Attempts to increase the rate of screening are limited by the total number of colonoscopies that can be performed daily in the United States [2]. Thus, identifying interventions that decrease the duration of colonoscopy without compromising quality metrics, such as polyp detection, can lead to an increase in the clinical impact of colonoscopy for colon cancer prevention. Colonoscopy can be complicated by colonic spasms, which leads to patient discomfort, longer procedure times, increased use of sedatives and operator fatigue [3]. Glucagon is an intravenously administered anti-spasmodic agent that relaxes gastrointestinal smooth muscle and produces a prompt effect following administration [4,5].

Its short serum half-life (8-18 minutes) and minimal side effects at the standard dose of 1 milligram (mg) make it an attractive spasmolytic over other anti-cholinergic drugs [3]. While it is routinely used during endoscopic retrograde cholangiopancreatography (ERCP) to inhibit peristalsis to facilitate cannulation of the papilla, it is uncommonly used during colonoscopy. Glucagon has the theoretical benefit of facilitating colonoscope passage by decreasing peristalsis and improving visualization and detection of polyps through the flattening of haustral folds. To our knowledge, three previous studies have studied the effect of glucagon during routine colonoscopy [6-8]. Results from these studies are conflicting and ranged from increased procedural difficulty for the endoscopist and increased patient side effects to improved patient tolerance and faster cecal intubation time with the administration of glucagon [6- 8]. Only one of these studies was performed with current standard high definition colonoscope and thus most reports do not account for technological improvements in the colonoscope and insertion techniques [8]. Furthermore, none of the prior studies reported on the effect of glucagon on adenoma detection rate (ADR).

We aimed to study the effect of glucagon during colonoscopy on key parameters such as cecal intubation time, total procedure time, patient experience, endoscopist perception of ease of procedure and polyp detection.

We performed a prospective, double-blind, placebo-controlled randomized trial studying the effect of glucagon during colonoscopy. The study was conducted at Zuckerberg San Francisco General Hospital and Trauma Center (ZSFG), an academic, safety net institution (i.e., provides a significant level of care to low income, uninsured and vulnerable populations in the city of San Francisco) affiliated with the University of California, San Francisco (UCSF). Patients are ethnically diverse, and many are immigrants with more than 20 different languages spoken by patients.

Patients presenting to the ZSFG endoscopy unit for colonoscopy by the primary investigator (JPC) between July 2014 to May 2017 were screened for enrollment. Inclusion criteria included patients aged 50-70 years scheduled for outpatient colonoscopy solely for the indication of “positive fecal immunochemical test” (FIT). Exclusion criteria for the study included refusal to provide consent, age younger than 18 or older than 70, prior abdominal surgery, pheochromocytoma, insulinoma, pregnancy, prior colonic neoplasms, prior colonic surgery and end-stage liver disease with Child-Pugh score greater than six. Informed consent was obtained in the patient’s primary language. Patient questionnaires printed in English, Chinese, and Spanish were utilized for the study.

Sample size calculation was performed using cecal intubation time as the primary outcome parameter. Based on a prior randomized study, mean cecal intubation time was noted to be 294 seconds in the glucagon group and 370 seconds in the placebo group with a standard deviation of 140 seconds [8]. Using a power of 0.9 and an alpha of 0.05, a total sample size of 134 was calculated. Categorical data were compared by the χ2-test or Fisher Exact test where appropriate and numerical data were compared by the Student’s t-test. Statistical significance was defined as a two-sided p-value < 0.05.

Initial randomization was performed with optimism that 200 patients could be enrolled in the study, despite a sample size calculation of 134. Randomization was performed using a sealed envelope technique by the nurse study coordinator and/or the research protocol assistant (vide infra). Two hundred cards with either glucagon or placebo written on them in a 1:1 distribution was used. These cards were shuffled by the study coordinator and placed individually into opaque envelopes. The envelopes themselves were handed to a research assistant and shuffled again. Each envelope was placed in a larger opaque envelope serially labeled from 1-200. Following consent, patients were serially assigned a study number starting with number 1. Prior to the procedure, but after signed written consent, a non-procedural nurse opened the envelope associated with the patient’s study number in seclusion and drew up 1mg of glucagon in 1 milliliter [ml] of normal saline (NS) or 1 ml of NS alone (the placebo) in accordance with the card within the envelope. Glucagon, a white powder, is reconstituted with 1ml of NS, making it impossible to identify study drug by the appearance of the syringe to anyone in the procedure room. Thus, all persons in the examination room, including patient, nursing personnel and operator physicians, were blind to patient randomization. Due to scheduling conflicts and factors outside the control of study designers, study enrollment was slower than expected. After two years, Endoscopist 1 enrolled 69 patients. Due to graduation of Endoscopist 1, Endoscopist 2 was added to the study and 31 additional patients were enrolled until Endoscopist 2’s graduation. Once 100 patients were enrolled, decision was made to conclude the study and perform data analysis. Due to initial randomization with 200 cards, the two endoscopists had unequal distribution of patients receiving glucagon or placebo (Figure 1). 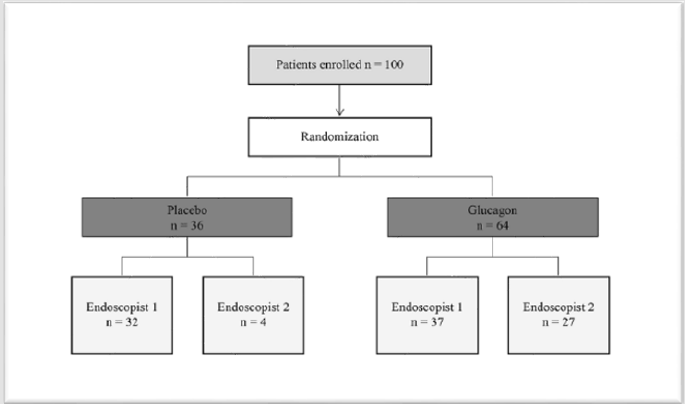 Figure 1: Due to initial randomization with 200 cards, the two endoscopists had unequal distribution of patients receiving glucagon or placebo.

All patients underwent complete bowel preparation using splitdose US Food and Drug Administration-approved preparations. Procedures between July 2014 to June 2016 was performed by one of two senior gastroenterology fellows, Endoscopist 1 (AA) with primary investigator (JPC) as supervisor. Procedures between October 2016 to May 2017 were performed by a second senior gastroenterology fellow, Endoscopist 2 (TDK) with primary investigator (JPC) supervision. As a result of performing the studies with gastroenterology fellows who were rotating through ZSFG as part of their clinical rotations, non-consecutive patients were enrolled in the study. At the beginning of each procedure, time of scope insertion was recorded by the nurse. The primary investigator, upon visualizing classic triangular folds of the transverse colon, requested the procedural nurse to administer the study drug. Given a glucagon half-life of 8-18 minutes, drug administration for our study was performed once the colonoscope reached the splenic flexure, thus ensuring glucagon activity during both the later part of the insertion phase and the withdrawal phase. Time of medication administration was recorded for all patients. The nursing staff also recorded the following: cecum intubation time, start of colonoscope withdrawal time, total procedure time, and amount of sedatives used for the procedure.

The study was approved by the Committee of Human Research at UCSF. All enrolled patients provided informed consent. The study was registered a priori on ClinicalTrials.gov (NCT02078726). Data collection was performed for abstract submission and after completion of enrollment in the study. The listed authors had sole responsibility for the study design, data collection, decision to submit the manuscript for publication, and drafting of the manuscript. 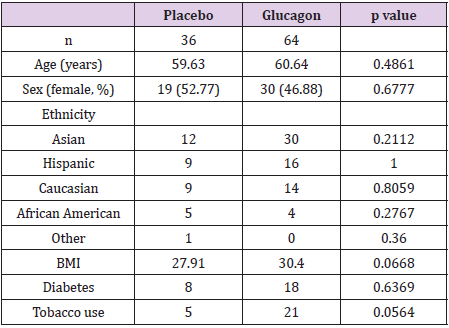 Our primary finding was that time to cecum and total procedure time were significantly shorter for patients who received glucagon, which carries important economic implications, especially when paired with the trend noted in this study towards improved NDR with glucagon use. Shorter cecal intubation time and total procedure time was a surprising finding given that study drug was administered when the colonoscope was advanced to the level of the splenic flexure. When time to cecum was subdivided into time to medication administration and time between medication administration and cecal intubation, a statistically significant difference was seen in the time to medication administration between the two groups. The etiology of this difference is unclear. A possible confounder for the difference in time to cecum between the two groups is notable if procedure times are evaluated for each Endoscopist separately (Table 2). Endoscopist 2 took less time at reaching the cecum than Endoscopist 1. Endoscopist 2 however performed a larger percentage of the glucagon cases than placebo cases (42% vs 11%), thus possibly contributing to faster cecal intubation time in the glucagon group. However, improvement in the perception of Endoscopist scope difficulty scores with glucagon use suggests that an association between glucagon use and faster cecal intubation time exists. Prior studies have reported an association between cecal intubation time and perceived colonoscopy difficulty [11,12] (Tables 3 & 4). This was again demonstrated in our study as both cecal intubation time and endoscopist assessment of scope difficulty (Table 5) are statistically improved in the glucagon group.

Table 2: Antibiotic susceptibility testing by disk diffusion according to the CLSI guidelines. Amikacin was tested by the use of E-testing. R: resistant. S: sensitive.

Detailed analysis of adenoma and serrated adenoma detection with glucagon use has not been performed before. This study was not powered to examine outcomes like adenoma and neoplasia detection rates, however, a trend towards improved detection, specifically, serrated polyp detection was seen with glucagon use and warrants further evaluation in larger studies. This prospective, randomized, placebo study was double-blinded, minimizing the chance for bias. Additionally, all colonoscopies were supervised by a single, expert endoscopist with experience of over 10,000 colonoscopies which mitigated any potential for confounding factors had multiple endoscopists been utilized. Furthermore, detailed analysis of adenoma and serrated adenoma detection has never been performed before and this study identified a signal/ trend towards improved detection in the glucagon group that warrants further investigation in a larger study powered to examine this outcome.

The results should be interpreted with recognition of the limitations of this study. First, calculated sample size to answer the primary endpoint of cecal intubation was not reached. The major implication of this is that the study may have been underpowered to identify differences. Furthermore, the study was not powered to examine other potentially clinically meaningful outcomes such as adenoma and neoplasia detection rates. Second, patients received sedation for their procedures, which had the potential to impact their response to questionnaires despite being specifically instructed to fill out their answers at least one day following the procedure to mitigate amnestic sedative effects. However, there is no reason to believe this would affect the placebo or glucagon differently and patients received similar amounts of sedative medications in both groups. Lastly, while a single endoscopist supervising all procedures prioritized internal validity of the study, this may limit the potential recruitment of patients and generalizability of the results to other endoscopists. Thus, future larger studies powered to examine the outcome of neoplasia detection rate could consider utilizing multiple endoscopists.

Background: Impact of antispasmodics use, such as glucagon, during screening colonoscopy is largely unknown.

Conclusion: Glucagon use during screening colonoscopy leads to shorter total procedure time and improved endoscopist scope manipulation. Association between glucagon use and increased NDR is noted but requires larger studies powered to evaluate NDR as a primary outcome.