Extended-spectrum beta-lactamases (ESBLs) are enzymes produced by some bacteria that confer resistance to most beta-lactam antibiotics. Production of ESBLs by Klebsiella pneumoniae and Escherichia coli isolated from respiratory tract infections was investigated by phenotypic and molecular techniques. Eighty well characterized bacterial isolates comprising of 50K. pneumoniae and 30 E. coli were subjected to antibacterial susceptibility testing by the Kibrick agar diffusion method, using commercially available antibiotic discs (Oxoid, England). Twenty of the bacterial isolates, showing multiple resistances to antibiotics, made up of 13K. pneumoniae and 7 E. coli were used for ESBL detection. ESBL phenotypic detection was carried out using combination disc method, while the molecular detection was by polymerase chain reaction (PCR) amplification of bla-TEM gene. All the 80 bacterial isolates showed variable resistance to the antibiotics used. Phenotypical investigation of the 20 bacterial isolates, with multiple resistance to antibiotics, revealed 100% prevalence of β lactamase production, while PCR detected bla-TEM gene in eight out of the 20 (40%) bacteria. ESBL production by K. pneumoniae and E. coli could lead to delay in hospital outcomes in managing diseases caused by these organisms, hence the need for adequate laboratory investigations before administration of antibiotics.

It may also result from micro-aspiration of upper airway secretions previously colonised by this organism in severely ill-patients hence it is a cause of nosocomial pneumonia. E. coli pneumonia may also be community acquired in patients with underlying diseases such as diabetes mellitus, alcoholism, and chronic obstructive pulmonary disease. E. coli pneumonia often manifests as a bronchopneumonia of the lower lobes and may be complicated by empyema [6]. Bacteria resistance to various classes of antimicrobial agents has been reported in both human and veterinary medical practice and continues to be on the increase worldwide [7-9]. Antibiotics resistance happens when germs develop ability to defeat the drugs designed to kill them. The germs do not die and continue to grow. Antibiotic resistance often led to higher medical cost, prolonged hospital stay and increased mortality [9]. Extended-spectrum beta-lactamases (ESBLs) are major enzymes produced by some bacteria that confer resistance to most beta-lactam antibiotics, including penicillins, cephalosporins, monobactam and aztreonam [10]. β-lactamases are divided into four classes (Class A-D) based on their amino acid sequence.

Classes A, C and D function by serine ester hydrolysis mechanism, while the class B beta-lactamases have a Zinc ion participating in catalysis. Functionally β-lactamases are grouped into three groups: Group 1cephalosphorinases (Class C), Group 2 serine β-lactamases (Classes A and D), and Group 3 metallo-β-lactamases (Class B), each of which is further divided several different subgroups Ozturk et al. [11]. TEM-1 is the most commonly encountered β-lactamase in Gram-negative bacteria. Up to 90% of ampicillin resistance in E. coli is due to the production of TEM-1. Carbapenemases are a diverse group of β-lactamases that are active not only against the oxyimino-cephalosporins and cephamycins but also against the carbapenems [12]. Infections with ESBL-producing organisms have been associated with poor outcomes and thus Community and hospital-acquired ESBL-producing Enterobacteriaceae is prevalent worldwide [12]. The study was aimed at assessing the prevalence of β lactamase producing K. pneumoniae and E. coli isolates from respiratory tract infections.

Eighty well characterized bacterial isolates comprising of 50K. pneumoniae and 30 E. coli were collected from the stock cultures of the Microbiology Laboratory, Department of Biological Sciences, Afe Babalola University Ado Ekiti, Nigeria, and were used for this study. The bacteria were previously isolated and identified from cases of respiratory tract infections.

Re-Characterization and Identification of the Bacterial Isolates

All isolates were tested for purity and re-characterised using standard microbiological and biochemical tests as described by Barrow and Feltham [13]. The bacterial isolates were identified, based on their cultural, morphological and biochemical characteristics, with the help of online Gideon informatics [14], and with reference to Garrity et al. [15].

Twenty of the bacterial isolates, showing multiple resistances to antibiotics, made up of 13K. pneumoniae and 7 E. Coli, were screened for the production of ESBLs by using the disk combination test by assessing a ≥5mm increase in diameter of zone of inhibition between the antimicrobial (beta-lactam) tested in combination with clavulanic acid and the diameter when the agent is tested alone, after overnight incubation at 37 °C [16]. The antibiotics used were); ceftazidime, CAZ (30μg); cefuroxime, CXM (30μg); cefoxitin, FOX (10μg) and cefpodoxime, CPD (10μg).

Plasmid DNA extraction from 24 hour overnight on Trypticase Soy Broth cultures of the bacteria was carried out with the aid of GeneJET Plasmid Miniprep Kit (Thermo Fisher Scientific). The procedure for plasmid extraction was of four parts namely, Lysate preparation, binding to column, washing bound DNA and elution of pure DNA; with strict adherence to manufacturer guide. The elution was then run in 1% agarose gel electrophoresis and the remaining plasmid DNA was stored at -20 °C for Polymerase chain reaction (PCR) analysis of TEM gene.

The PCR amplification of β-lactamase blaTEM gene was carried out using the forward and reverse blaTEM primers: TEM-F:5’-AT GAGTATTCAACATTTCCG-3’ and TEM-R: 5’-CCAATGCTTAATCAGTGAGG- 3’ (1080 kb) [17] (Figure 1). Procedure: 5.0μl of 2x per master mixes was dispensed into the PCR tube. 1.0μL template DNA (10pg -1ng for plasmid and 0.1-1μg for genomic DNA) and 1μL of both forward and reverse primers (2.5μM) was added to the tube, and then 1.0μL nuclease-free water was used to bring the total volume to 10μL. The PCR mixture was mixed together appropriately and gently vortexed. The PCR tubes were placed into the thermal which was programmed to carry out the following steps according to the table below: After completion of PCR, a 9μL aliquot of reaction was mixed with 3μL of loading dye (6X) and loaded onto an agarose gel for size separation of the PCR products. The gel was run at 75v for 1hr 30min. The DNA bands were then scored against the standard DNA marker band. 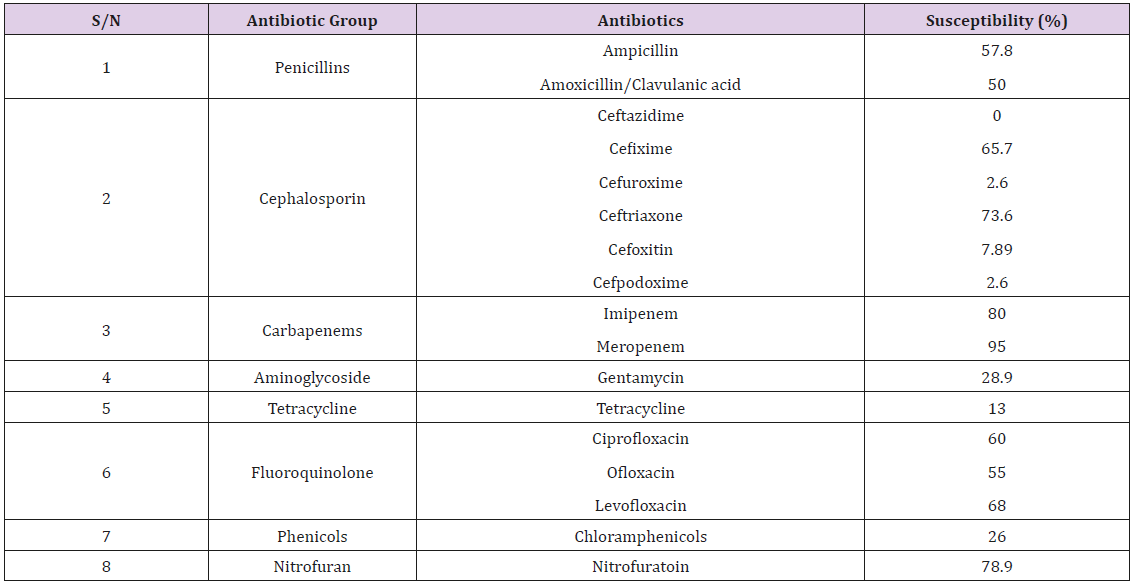 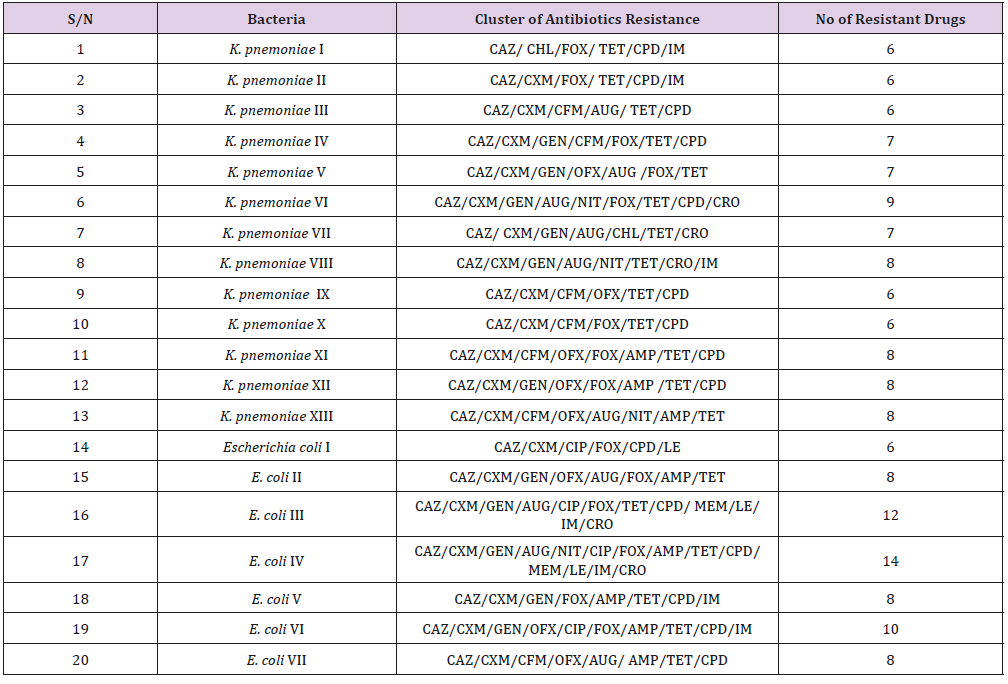 Of the twenty isolated used for the ESBL detection, the 13K. pneumoniae isolates were susceptible to meropenem, while 2 (15.4%) of the K. pneumoniae were resistant to imipenem. One (14.3%) each of the 7 E. coli isolates showed resistance to imipenem and meropenem. Resistances to cluster of 8-16 antibiotics per organism were recorded (Table 2). Phenotypical investigation revealed high prevalence (100%) of β-lactamase production by all the bacterial isolates with enhancement of zones of inhibition (≥5mm) between when the β-lactam disk was used alone and when used in combination with clavulanic acid (Table 3). The PCR amplification of bla-TEM β-lactamase gene, detected the presence of the drug resistant gene in eight (40%) out of the twenty bacterial isolates tested; 6/12 (50%) for K. pneumoniae and 2/6 (33.33%) E. coli. 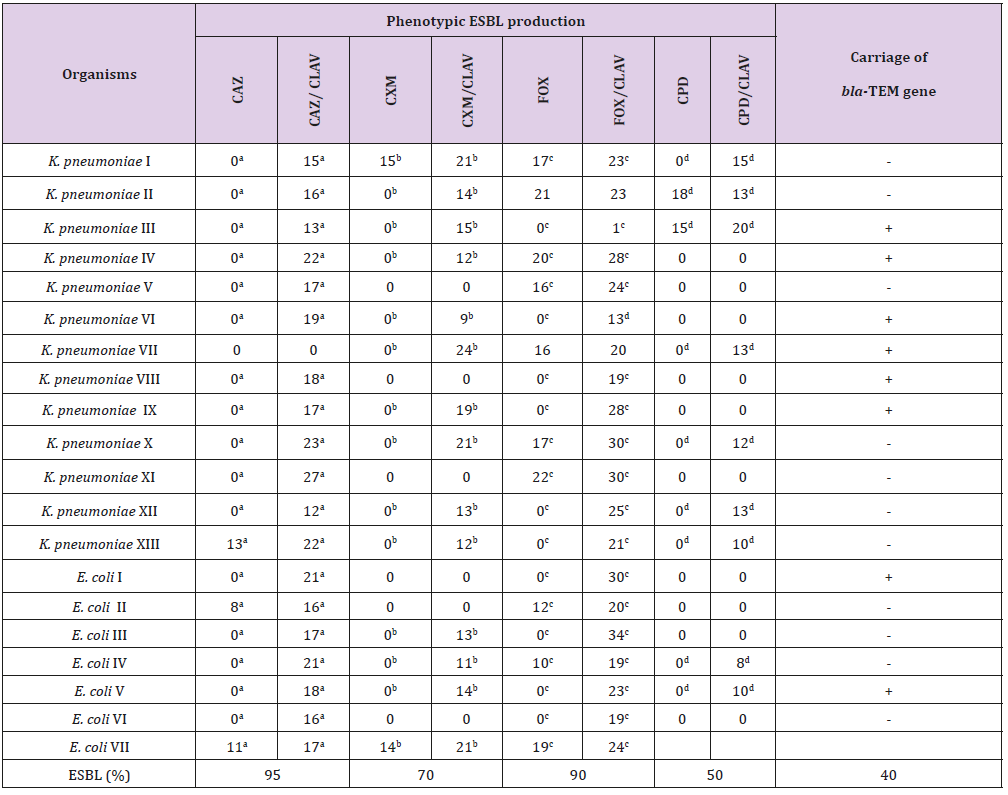 Note: a-fValues with same superscripts on the same row, β-lactam disk was used alone and when used in combination with clavulanic acid indicates ESBL production- Negative; + positive for blaTEM gene

With the emergence of ESBL-producing organisms worldwide and as the number of β-lactam resistant pathogens increases, developing effective antibiotics and inhibitors for specific pathogens becomes important. The K. pneumoniae and E. coli isolates used in this study showed multiple drug resistance to as much as 14 antibiotics. This observation reiterates the finding in other studies that have reported antibiotic resistance among bacteria especially K. pneumoniae and E. coli [18,19] The high prevalence of multi-drug resistant bacteria may reflect the indiscriminate and inappropriate use of antibiotics in the study area, where these drugs are often sold over-the-counter without a physician’s prescription. All pneumoniae and E. coli isolates were highly susceptible to the carbapenems, the current drug of choice for the treatment of patients infected with multidrug-resistant ESBL-producing bacteria.

The present study reported 100% prevalence of the ESBL production among the bacterial isolates used, based on phenotypic assay, and the prevalence of 40% blaTEM gene. The blaTEM was detected in 33.33% of E. coli and 50% of K. pneumonia. The prevalence of strains of these organisms expressing the ESBL phenotype may vary across geographical regions. Bora and coworkers 19 in India had earlier reported phenotypic confirmatory of ESBL production in 73.58% of E. coli and 67.24% of K. pneumoniae; as well the prevalent genotype blaCTX-M in E. coli (88.67%) and blaTEM in K. pneumoniae (77.58%) ESBL producing isolates. They observed that majority of ESBL producing isolates were found to possess more than one ESBL genes. A recent study by researchers in Iraq, reported ESBL-producing E. coli isolates that possessed 81% blaTEM, 16.2% blaSHV, and 32.4% blaCTX-M genes; as well as 64.7% blaTEM, 35.2% blaSHV, and 41.1% blaCTX-M genes existed in the isolates of K. pneumoniae [20]. The low prevalence of genotype ESBL reported in this study may be due to low number of bacterial isolates used (due to availability of molecular kits), a higher number of isolates might have given a better result. In addition using primers of more than one beta-lactam genes will definitely increase ESBL genotype reporting among these organisms.

In conclusion the study showed that carbapenems followed by fluoroquinolone are the effective antibiotics against the bacterial isolates in the study area. ESBL production by K. pneumoniae and E. coli is of public health importance, as it could lead to delay in hospital outcomes in managing respiratory diseases as well as other diseases caused by these organisms.