Depression is a common disease. According to the World Health Organization report, there are about 350 million people with depression worldwide. The number of suicide deaths due to depression is as high as 1 million per year. It is expected that by 2030, depression will become the world’s first high-burden disease [1,2]. Geriatric depression is an important medical phenomenon in the aging society of the population, and it is a common cause of disability in the elderly and a decline in the quality of life in later life [3-5]. Elderly patients with depression are often accompanied by a variety of physical discomfort, such as tinnitus, which brings many difficulties to treatment. Tinnitus is an abnormal sound sensation caused by auditory dysfunction in the absence of external sound and sound stimulation [6]. About a quarter of the population has had a tinnitus experience [7].

The incidence of tinnitus increases rapidly with age, with an incidence of more than 10% among the elderly over 65 years of age, often accompanied by hearing loss [8]. Due to the obvious subjective response, patients with tinnitus often present with anxiety, depression and sleep disorders, which seriously affect normal life and work [9], and even lead to suicidal tendencies [9,10]. Studies have shown that tinnitus has a certain relationship with emotional disorders such as anxiety and depression [11], especially severe tinnitus, which is considered to be positively correlated with the degree of depression [12]. However, most of the current researches are based on the general population, and few patients with depression diagnosed as psychiatric patients are studied and analyzed. Therefore, this study intends to select elderly patients with depression to investigate the population, in order to explore the relationship between depressive symptoms and tinnitus in elderly patients with depression.

Elderly patients with depression who were admitted to the Geriatrics Department of Anhui Mental Health Center from May to August 2019 were included in the criteria:
a. Met the diagnostic criteria for DSM-V depression;
b. Older than 60 years old;
c. I and my guardian agree to participate in this study.
Exclusion Criteria:
a. Severe cardiovascular and cerebrovascular diseases, patients who cannot cooperate with physical examination and questionnaire;
b. Patients with otitis media, Meniere’s disease, transient cerebral ischemia (TIA), and tinnitus after ear trauma
c. Combine the deafness or ear to hear other sounds such as vascular beat sounds.
Collect general patient information and sociodemographic data, including gender, age, working status, years of education, marital status, smoking behavior, age at onset of depression, total duration of illness, total number of hospitalizations, and drug use. The study was reviewed and approved by the Medical Ethics Committee of the Fourth People’s Hospital of Hefei. All subjects or their guardians understood the research content and signed written informed consent. A total of 126 elderly patients with depression were enrolled, aged (68.61±6.124) years, including 35 males (28%) and 91 females (72%).

General Information: The history of the collection is detailed to ask the patient’s age, gender, height, weight, marital status, religious beliefs, years of schooling, time of onset of depression, duration of illness, number of hospitalizations, treatment status and family history, past medical history (focus on whether there is Mental illness, ear disease, high blood pressure, diabetes and cardiovascular and cerebrovascular diseases and smoking and drinking history).

Collection of Tinnitus and Disability Data: Use tinnitus standardization to determine whether there is tinnitus. The standardization question is: “Is there or noise in one or both ears in your mind (such as ringing or squeaking, Beep), a duration of more than five minutes?

The patient who answered “Yes” was determined to have tinnitus, and the patient who answered “No” was determined not to have tinnitus [13-16]. According to the results of standardization of tinnitus, the subjects were divided into two groups: depression with tinnitus group and depression without tinnitus group. Tinnitus severity assessment: The degree of disability of the patient’s tinnitus was assessed using the internationally accepted Tinnitus handicap inventory (THI). The scale has a total of 25 questions, asking patients on a case-by-case basis, and answering “yes”, “sometimes” and “none” according to the patient’s own situation. If you select “Yes”, it is recorded as 4 points, “sometimes” is recorded as 2 points, “None” is recorded as 0 points, and the highest is 100 points. According to the scale score, the tinnitus disability is divided into four levels [17], the first level: 0-16 points, no disability; the second level: 18-36 points, mild disability; the third level: 38-56 points, medium Degree of disability; Level 4: 58-100 points, severe disability.

The Hamilton Depression Scale (HAMD): The Hamilton depression scale (HAMD) compiled by Hamilton in 1960, is currently the most commonly used gauge for assessing depression status. The study used 24 versions and was evaluated by the same psychiatrist based on the patient’s symptoms. The assessment included total scores and factor scores, including factors such as somatization, weight, cognitive impairment, day and night changes, block, Sleep disorders and sense of despair. 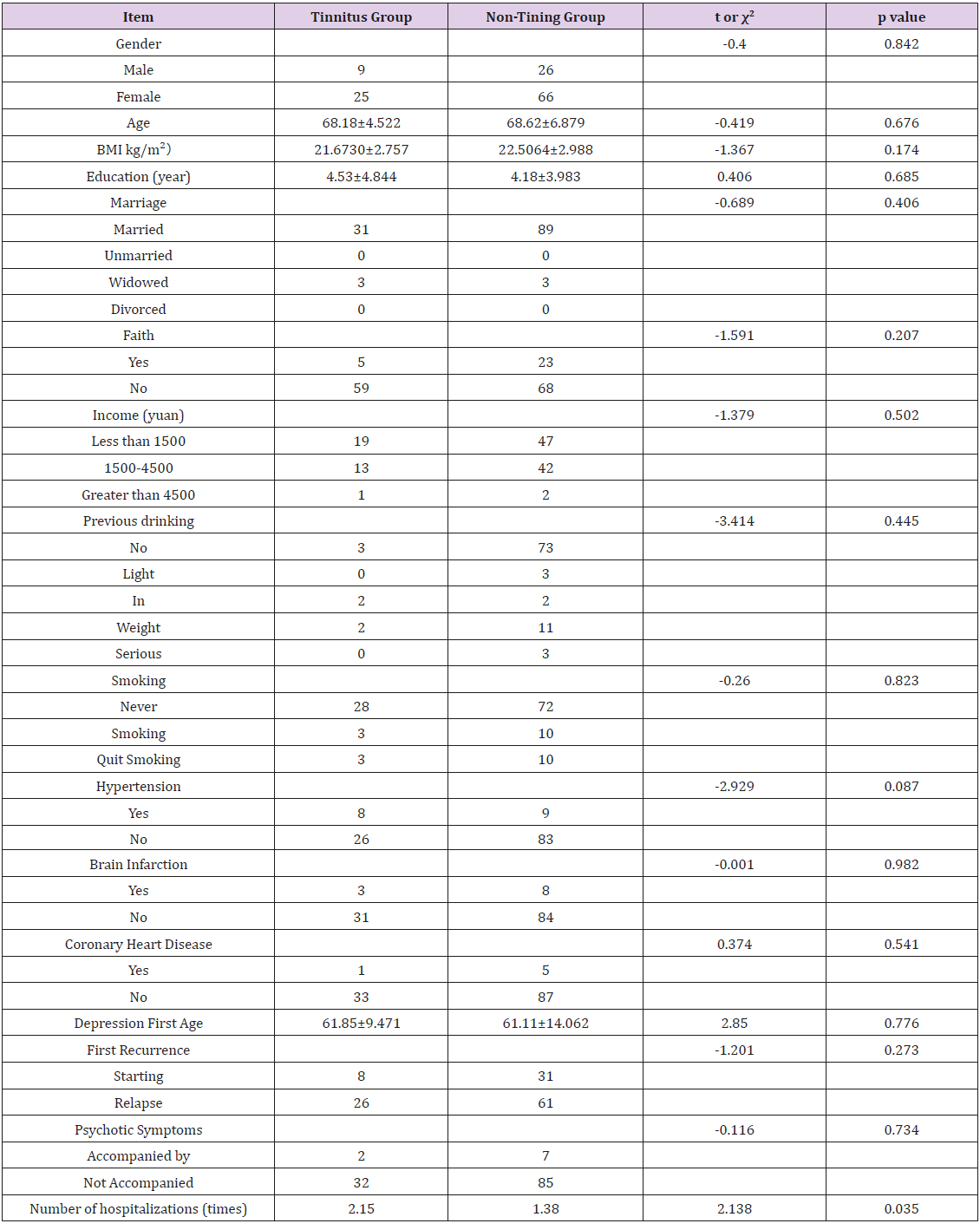 Table 1: Comparison of general data and clinical data between depression and tinnitus group. 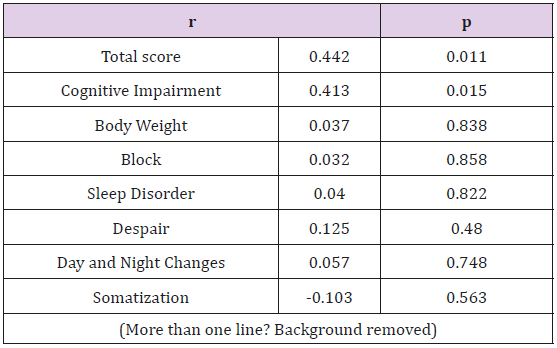 Psychiatrists are also beginning to pay attention to the physical symptoms of patients with mental disorders. An epidemiological survey in Australia showed that tinnitus had occurred in 30.3% of the elderly (age 55-99) [13]. This is consistent with the results of this study. This study found that the incidence of tinnitus in the elderly patients with depression reached 27.0%, suggesting that clinicians should pay close attention to the occurrence of tinnitus in elderly patients while treating depression in elderly patients. This study found that the total score of HAMD in the depression tinnitus group was significantly higher than that in the depression nontinnitus group, indicating that tinnitus may aggravate depressionrelated symptoms in elderly patients with depression. The specific mechanism is not clear. Studies have shown that over-activated cochlear dorsal nucleus in tinnitus may control emotional response by projecting into areas such as the blue spot, reticular structure, and nucleus of the nucleus [14]. Studies of neuroendocrine function have shown that tinnitus may induce an exacerbation of depressive symptoms by modulating the function of the HPA axis [15].

Animal studies have found that hippocampal damage in tinnitus model rats may be associated with depression performance [16]. The above mechanism studies and the results of this paper suggest that tinnitus may be a potential indicator for judging the severity of depression in the elderly, that is, when the patient has tinnitus symptoms, it may indicate more serious depressive symptoms. Reports at home and abroad suggest a link between tinnitus and depression. Tinnitus can induce and aggravate the occurrence of depression [12,17], while adverse emotions such as depression and anxiety can also cause or aggravate tinnitus [18]. Consistent with previous studies [13,19], this study found a positive correlation between the level of tinnitus disability and the degree of depression. Analysis of the reasons may be related to the mechanism of tinnitus and depression. The current medical opinion is that tinnitus originates from the cochlea and forms in the center. The occurrence and development of tinnitus are closely related to the central nervous system. Previous studies have suggested that the occurrence of tinnitus is likely to be related to serotonin (5-HT) and glutamic acid in the central nervous system. Dysfunction and disorders of limbic system function [20-22], while the limbic system and neurotransmitters such as 5-HT and glutamate play an important role in the pathogenesis of depression [23].

In addition, the “gating” system of tinnitus [24] is thought to be a key factor in the comorbid mechanism of tinnitus and depression. On the one hand, the weakening and destruction of the system’s function is related to tinnitus symptoms [25]. On the other hand, the system is susceptible to emotions, and negative emotions can reduce its function [26]. Human genomics studies suggest that brain neurotrophic factor (BNF) gene mutations may be a common susceptibility to both diseases [27]. In this study, Pearson correlation analysis showed a positive correlation between THI total score and cognitive impairment factor scores. Similarly, studies have shown that cognitive decline such as “short-term memory”, “attention ability” and “directed ability” are the main clinical features of cognitive impairment in patients with chronic subjective tinnitus [28]. In view of the close relationship between the ventromedial cortex of the prefrontal cortex and cognitive functions such as attention and memory [29], Leaver et al. believe that the abnormality of the ventromedial cortex in the prefrontal cortex of tinnitus patients may be the cause of cognitive impairment in patients [30].

The Main Disadvantages of this Study are:
1) This study is a cross-sectional study. It can only analyze the relationship between tinnitus and depression and clinical features. It is impossible to infer the causal relationship between depression and tinnitus, and it is necessary to continue the prospect of strict design. Sexual research;
2) Enrolled patients were from the Fourth People’s Hospital of Hefei City, with limited representation, especially 34 patients with tinnitus, more sample, a larger range of studies will help reduce research bias;
3) Depression and Tinnitus is closely related, but the hearing indicators of tinnitus patients are not detected in this study, so further research is needed to explore.
4) This study is only a current survey, and the exact relationship between tinnitus and depression needs further explanation from the etiology. The next work will further explain the interaction between the nervous system structure and EEG to more Good guidance for clinical work.

In short, tinnitus is a common clinical symptom. Psychiatric patients, especially those with depression in the elderly, have a high incidence. It seriously affects the physical and mental health of patients. Because the pathogenesis of tinnitus is still unclear, the lack of treatment methods and evaluation criteria is difficult to cause symptoms. Relieve, bring a serious psychological burden to patients, then further explore the relationship between the two to help to better understand the pathogenesis of depression, while in the clinical discovery of depression with tinnitus patients, while paying attention to depression, the concern for tinnitus cannot be ignored.

Key research and development project of Anhui provincial science and technology department (201904a0702009) (consistent with Chinese).