Heterocyclic amines (HCA’s) are various molecules that’s common feature is containing a nitrogen (or another non-carbon) atom in their aromatic cyclic structure. This group contains some basic molecules, for example pyridine or imidazole, but also harmful ones. The World Health Organization’s International Agency for Research on Cancer (IARC) created a five-scale list about the carcinogenicity of materials and activities. On the list, some HCA’s are classified in group 2A (probable human carcinogens) or 2B (possibly human carcinogens), because their epoxide metabolites can adduct with the DNA. These molecules are the IQ-type (or thermic) HCA’s that are formed over 150°C from amino acids, reducer sugars and creatine or creatinine. The most frequent thermic HCA’s are 2-amino-3-methylimidazo[4,5-f]quinoline (IQ), 2-amino-3,4-dimethyl-imidazo[4,5-f]quinoline (MeIQ), 2-amino- -3,8-dimethyl-imidazo[4,5-f]quinoxaline (MeIQx), 2-Amino-3,7,- 8-trimethylimidazo(4,5-f)quinoxaline (4,8-DiMeIQx) and 2-amino- -1-methyl-6-phenylimidazo[4,5-b]pyridine (PhIP) (Figure 1). 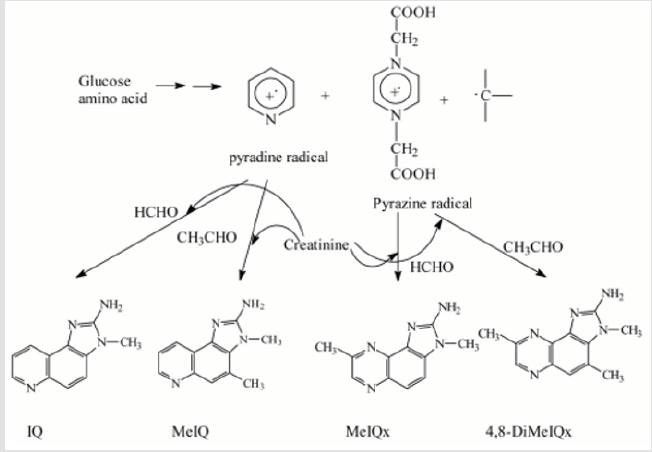 The other important group of HCA’s includes are the pyrolytic (non-IQ-type) HCA’s, such as harman or norharman. They are not cancinogenic on their own, but they can strengthen other carcinogenic agents’ impact, so they are co-carcinogens. Pyrolytic HCA’s are formed during the pyrolysis of amino acids and proteins over 300 °C. The pyrolytic type of HCA’s can be formed in any kind of protein- containing heat treated foodstuffs but the thermic ones’ most probable occurrance is the cooked muscle meat and meat products due to their high creatine/creatinine content. During the processing of meat products, the surface temperature can easily reach 150 or even 300°C and this is even more possible in the case of unattended home cooking. That’s how carcinogenic HCA’s can be formed and so the consumers may be at risk of ingestion carcinogenic agents with their food. The IARC classified red mammal meat into group 2A and red meat products into group 1 (carcinogenic to humans), because of the risk they can cause. However, the same HCA substrate compounds are available in poultry meat and fish, as well.

There are some data on the presence of potentially carcinogenic HCA’s in heat treated poultry meat from the studies of different authors in the topic that are summarized as follows (Table 1). As these data clearly show, these compounds may be present in different concentrations in the poultry meat, as well. However, more examination is needed on the consumers’ cooking habits as main influencing factors in order to reduce the level of these harmful, mostly carcinogenic compounds as much as possible. 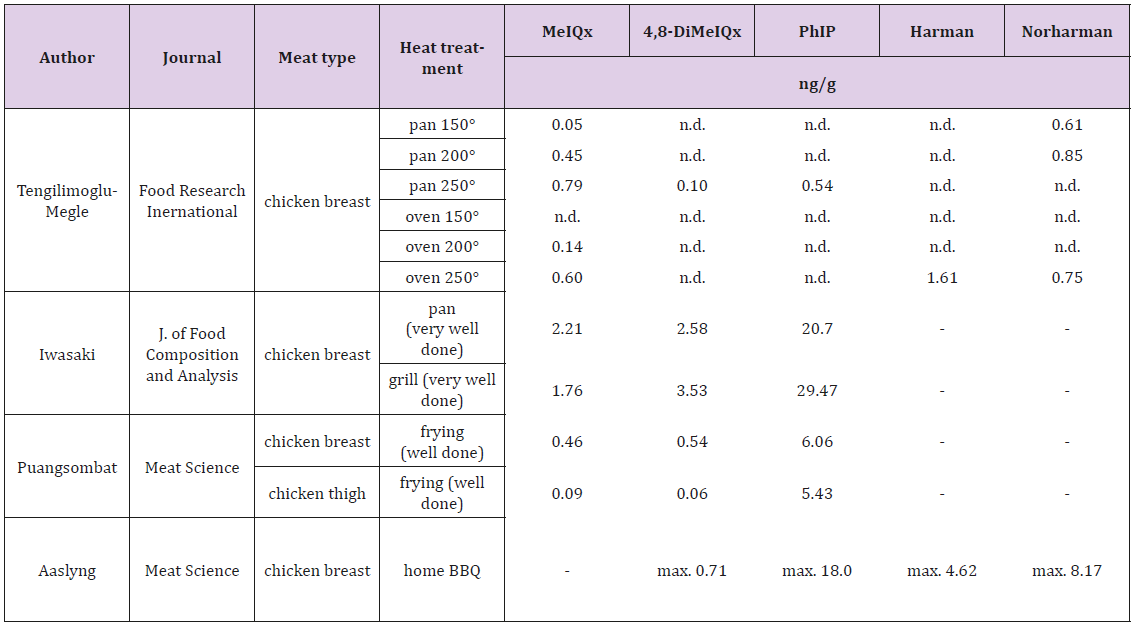 The Project is supported by the European Union and co-financed by the European Social Fund (grant agreement no. EFOP-3.6.2- 16- 2017-00012, project title: Development of a product chain model for functional, healthy and safe foods from farm to fork based on a thematic research network)”