#Contributed equally to this work.

Objectives: To explore the relationship between lipoprotein a (Lp (a)), glycosylated hemoglobin (HbA1c) and coronary stenosis in patients with non - diabetic coronary heart diseases. Methods: A total of 302 patients with non-diabetic coronary heart disease were randomly selected from January 2018 to February 2019 in the department of cardiology of our hospital according to the random number table method. Biochemical, electrocardiogram and other relevant test results as well as general characteristics such as address, sex and age of the selected patients were recorded .Serum levels of Lp (a) and HbA1c were determinate and analyzed by One-way Anova to explore the correlation between them and the degree of coronary artery diseases.

A total of 302 patients with non-diabetic coronary heart disease were admitted to the department of cardiology of our hospital from January 2018 to February 2019. According to the American Diabetes Association (ADA) diagnostic criteria for DMs in 2016:

a) The level of fasting blood glucose is higher than 7.0 mmol/L;
b) The level of blood glucose is higher than 11.1 mmol/L two hours after OGTT test;
c) HbA1c is greater than or equal to 6.5%;
d) The typical symptoms of hyperglycemia, the risk of hyperglycemia and the patients with blood glucose greater than or equal to 11.1 mmol/L at random time;
e) The patients with glucose before OGTT test. Urinary history is currently under dietary control and drug treatment.
Anyone who meets any of the above criteria can diagnose DM is excluded from the study. Exclusion criteria: a) Patients diagnosed with recurrent myocardial infarction.
b) Patients who had undergone coronary stent implantation.
c) Patients diagnosed with malignant tumors.
d) There are liver and kidney damage, such as elevated ALT elevations, elevated CREA, BUN, Cyc, rise).
e) Patients with other diseases affecting lipid metabolism, such as thyroid disease, nephrotic syndrome, etc.
f) Patients who have taken lipid-lowering drugs (Statins, etc.) for lipid-lowering treatment.

Such as sex, age, history of hypertension, smoking history, etc.

Coronary angiography shall be performed by senior physicians or above; The radial artery puncture approach was performed under local anesthesia, and the optimal exposure position was selected for examination under the guidance of digital angiography machine (Axiom Artis FA, Siemens, Germany). All patients underwent angiography of right coronary artery, left main artery, left circumflex artery and left anterior descending artery.

According to the results of angiography, all coronary arteries and their branches were quantitatively assessed by Gensini score criteria:

a) According to the degree of stenosis, 1%-25% was 1 point, 26%-50% was 2 points, 51%-75% was 4 points, 76%-90% was 8 points, 91%-99% was 16 points and 100% was 32 points.
b) Coefficient of lesion location: left main coronary artery * 5; proximal anterior descending branch * 2.5, middle * 1.5; apical branch and first diagonal branch * 1, second diagonal branch * 0.5; proximal circumflex branch * 2.5, blunt marginal branch, distal circumflex branch and posterior descending branch * 1, posterior branch * 0.5; proximal, middle and distal right coronary artery * 1 and posterior descending branch * 1.
c) The lesion score = the score of each coronary artery * the coefficient of the lesion site. If the patient has multiple vascular lesions, the total score of each lesion is the total score of the severity of coronary lesions.

SPSS 21.0 software was used for statistical analysis. For measurement data, homogeneity test of variance and normality test were carried out. Data with homogeneity of variance and normal distribution among groups were presented as mean ± sd. The differences of data among groups were compared by oneway Anova. For data that do not conform to normal distribution, the median (quartile spacing) is presented, and kruskal-wallis test is adopted. For counting data, chi-square test is used. Spearman correlation analysis was used to analyze the relationship between Lp(a) and HbA1c coronary artery stenosis. The difference was statistically significant with P < 0.05.

Comparison of Clinical Data between Groups with Different Lp(a) Levels

There was no statistically significant difference in the clinical data of the three groups, such as age, smoking history, hypertension history, blood lipid and fasting blood glucose (P > 0.05). The mean Gensini score in serum Lp(a) group was higher than that in serum Lp(a) group (P < 0.001) (Table 1).

Comparison of Gensini Scores between Groups with Different Lp(a) Levels

Comparison of Clinical Data between Groups with Different HbA1c Levels 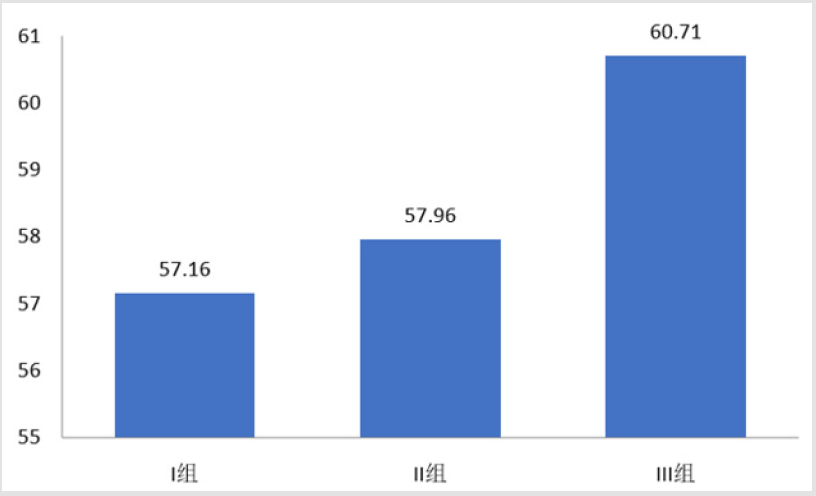 The Relationship between HbA1c and the Degree of Coronary Artery Stenosis

After adjusting for age, gender, hypertension history, smoking history, TC, TG,HDL-C, LDL-C, FBG, Lp(a) and other factors, there was no significant relationship between HbA1c level and Gensini score (Table 3).

Table 3: Relationship between HbA1c and degree of coronary artery stenosis.

Relative Analysis of Lp(a) Level and HbA1c Level in Patients

Coronary heart disease (CHD) is a stenosis or occlusion of vascular lumen caused by embolism and inflammation. It is often divided into acute coronary syndrome (ACS) and stable coronary heart disease (SCD). In recent years, due to the change of people’s living habits and the aging of the population, the incidence of coronary heart disease has increased year by year. At present, the number of coronary heart disease deaths in China has risen to the second place in the world, seriously threatening Chinese health and even life. However, the etiology is still unclear. Most studies believe that it is caused by multiple genetic and environmental factors, including age, sex, smoking, hyperlipidemia, hypertension, diabetes and impaired glucose tolerance, unhealthy diet, lack of exercise, life stress, genetic factors and so on [7]. Meanwhile, a large number of studies have found that some new factors seem to be related to the occurrence and development of coronary artery diseases, including hemoglobin a1c (HbA1c), lipoprotein a(Lp(a)), bilirubin (TBIL), fibrinogen (Fbg), homocysteine (Hcy), serum uric acid and c-reactive protein (CRP).

Lipoprotein a (Lp(a)) was first discovered and named by the Norwegian scientist Berg et al. [8] in 1963. It is a special lipoprotein synthesized by the liver, mainly composed of LDL and Apo(a),which both through disulfide bond covalency connection. LDL components mainly including cholesterol, phospholipids and ApoB - 100. Apart from genetic factors, they are almost independent of factors such as age, sex, smoking, diet, lipid metabolism, drugs, and environment. Some studies at home and abroad have confirmed that elevated Lp (a) is closely related to coronary heart disease and is considered as a risk factor for coronary heart disease [9]. The pathogenic mechanism mainly has the following several points.

(1) Lp(a) is highly similar to plasmin (Pg) in structure, and binds fibrin competitively with plasmin, thereby inhibiting the hydrolysis of fibrin and increasing fibrin in plasma. Meanwhile, Lp(a) promotes the formation of thrombosis by inhibiting the activation of t-PA to Pg [10].
(2) Lp (a) contributes to atherosclerosis through regulating the aggregation of single nuclei,activating complement and participating in inflammation.
(3) Lp (a) adheres to vascular endothelial cells, causing endothelial dysfunction, endothelial cell apoptosis, participating in the proliferation of vascular endothelial smooth muscle cells, and leading to the occurrence and development of atherosclerosis.
(4) Lp (a) can pass through the vascular endothelium, deposit in the intima, and combine with the matrix components, thereby resulting in secondary peroxidation.

Chemically modified Lp (a) can enter macrophages, and then transform into foam cells to promote the occurrence and development of AS plaques and thrombosis [11]. A domestic study on the relationship between various factors of blood lipid and atherosclerosis [12] showed that Lp (a) > TG > LDL-C > TC > HDL > apoB > apoA1, suggesting that Lp (a) is superior to other blood lipid indicators in predicting AS and coronary heart disease. This study found that serum Lp (a) level was positively correlated with coronary Gensini score, not affected by age, sex, smoking, blood pressure and other factors, but not significantly correlated with TC, TG, LDL, HDL. Therefore, Lp (a) is an independent risk factor for coronary heart disease, which can be used as a predictor of the severity of coronary artery disease. Glycosylated hemoglobin (HbA1c) is a product of continuous and irreversible non-enzymatic reaction between valine and glucose at the N-terminal of two beta chains in erythrocyte Hb in blood. It can usually reflect the control of blood sugar for nearly 2-3 months. American Diabetes Association (ADA) and World Health Organization (WHO) have recommended HbA1c content as a new diagnostic criterion for DM, and HbA1c > 6.5% as a clinical diagnostic cut-off point [13,14]. In recent years, a large number of domestic and foreign research data show that HbA1c is an independent risk factor for coronary heart disease in both diabetic and non-diabetic patients and is positively correlated with the severity of coronary artery disease.

#Contributed equally to this work.

Objectives: To explore the relationship between lipoprotein a (Lp (a)), glycosylated hemoglobin (HbA1c) and coronary stenosis in patients with non - diabetic coronary heart diseases. Methods: A total of 302 patients with non-diabetic coronary heart disease were randomly selected from January 2018 to February 2019 in the department of cardiology of our hospital according to the random number table method. Biochemical, electrocardiogram and other relevant test results as well as general characteristics such as address, sex and age of the selected patients were recorded .Serum levels of Lp (a) and HbA1c were determinate and analyzed by One-way Anova to explore the correlation between them and the degree of coronary artery diseases.