Noonan syndrome is an autosomal dominant disorder characterized by multiple symptoms including facial dysmorphism, bleeding diathesis, proportional short stature and cardiovascular abnormalities often associated with hypertrophic cardiomyopathy [1,2]. This syndrome is known as RASpathies caused by mutations in components of Ras/mitogen-activated protein kinase (MAPK) pathway such as PTPN11, BRAF, KRAS, SOS1, MAP2K1, and RAF1 etc. [3,4] Hypertrophic obstructive cardiomyopathy (HOCM) is frequently observed in patients with Noonan syndrome and also represents the major determinant of the patient’s outcome [2]. It has been reported that Noonan syndrome patients with HOCM have a worse risk profile than the isolated HCM patients [5]. Transaortic ventricular septal myectomy, also known as Morrow procedure, provides excellent outcomes for adult patients with severe HOCM, while its effectiveness in children is poorly reported [6,7]. Moreover, the reported experience of septal myectomy for infant HOCM patient is very limited worldwide. In present study, we report on a Chinese patient with severe Noonan syndrome shown as neonatal hypertrophic obstructive cardiomyopathy, and this patient received good clinical outcome after undergoing septal myectomy procedure at 8 months old. Meanwhile, we performed next-generation sequencing to identify the causative gene defect and confirmed the diagnosis of Noonan syndrome.

Seven months-old full-term female infant weighted 5800 gr was referred to our hospital for the heart murmur. He was estimated as NYHA I and was asymptomatic without respiratory distress, syncope or cyanosis. Her pulse rate was 124/min and rhythmic, blood pressure was 92/55 mmHg, and oxygen saturation was 100% in room air. Lab test showed that the NT-proBNP was 15498 pg/ml and Hb 113g/L. Some of the hepatic and renal function related parameters were abnormal such as aspartate aminotransferase (AST, 80 IU/L), alanine aminotransferase (ALT, 69 IU/L), γ-glutamyl transpeptidase (GGT, 17IU/L), and total bilirubin (8.9μmol/L), creatinine (23.9μmol/L). Echocardiography revealed left ventricular hypertrophy with severe left ventricle outflow tract (LVOT) obstruction, moderate mitral regurgitation and systolic anterior motion of the mitral valve (SAM sign). Atria septal defect was also observed under Doppler. The LVOT pressure gradient estimated by Doppler flow was 78 mmHg before surgery (Figure 1A). This patient was subjected to Morrow septal myectomy procedure under general anesthesia with low temperature extracorporeal circulation at her eight months old. The cardiopulmonary bypass time was 114 min, clamping time was 73 min. After surgery, this patient took use of breath machine for 18 h, and stayed in ICU for 2 days. She successfully discharged from hospital 13 days after surgery without severe comorbidity.

Figure 1: Echocardiography imaging of the patient before
(A) and after
(B) surgery

Figure 1B presented the echocardiography of the patient after surgery, which showed obstructive septum was relieved. After surgery, the LVOT gradient immediately returned to normal as 14 mmHg at rest. This patient was also strictly followed up by echocardiography until last month, and the LVOT gradient maintained 14~16mmHg in the subsequent 2 years (Figure 2). This patient is also well growth and development during the followup. Family screening shows that this patient’s parents are normal without any Noonan syndrome or related heart disease. There is also no Noonan syndrome or congenital heart disease case among their cascade families within three generations. In order to identify the potential causative mutations for this severe case, we collected the peripheral blood from the patient and her parents (Figure 3A) and performed next-generation panel sequencing containing 1876 cardiovascular related genes. A rare mutation PTPN11 c.1528C>G (p.Q510E) is identified from the proband (Figure 3B), while the parents do not carry this variant (Figure 3C & 3D). This means that this is a de-novo variant. Base on previous literatures, we found that PTPN11 c.1528C>G was firstly identified in a patient with Noonan syndrome in 2005 by Takahashi and colleagues [8], and also reported in two patients with LEOPARD syndrome [9]. This variant is annotated as ‘pathogenic’ in both HGMD and Clin Var databases. And thus, we can conclude that this progressive neonatal HOCM patient is attribute to the PTPN11 c.1528C>G mutation, which also confirms the diagnosis of Noonan syndrome. 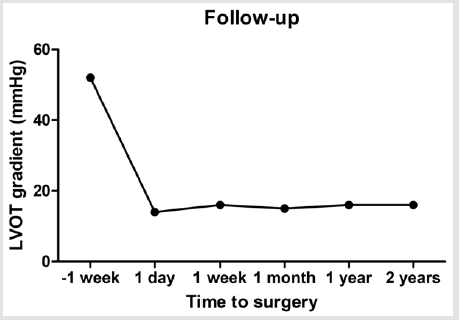 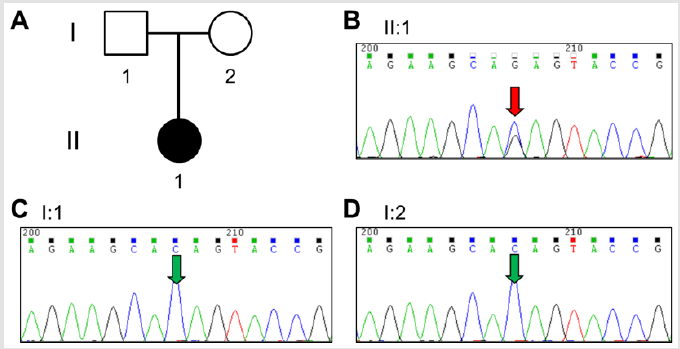 Figure 3: Genetic screening of the patient
(A) Family pedigree tree;
(B) Sanger sequencing result for proband and
(C,D) her parents.

In present study, we report on a 7-month-old girl affected with Noonan syndrome and neonatal HOCM. The clinical presentation included facial dysmorphism, cutaneous abnormalities and HCM with LVOT obstruction. These clinical features were suggestive of Noonan syndrome. We performed septal myectomy procedure for this patient, and her LVOT obstruction was relieved with LVOT gradient from 78mmHg down to 13mmHg after surgery. This patient also showed good outcome after 3 years follow-up. The treatment of septal myectomy surgery for adult HOCM patient showed excited outcomes after mid- or long-term follow-up in previous studies [10], but its application in pediatric patients were only reported by several centers such as Mayo clinic [6,7,11,12]. A recent study from Germany reported the clinical outcome of septal myectomy for 12 infant HOCM patients under 1 year of age from 1978 to 2015 including 6 Noonan syndromes [13]. They also confirmed this surgery can be performed safely during infancy with favorable perioperative result and long-term clinical outcome at a mean time period of 8.9 years after surgery [13]. The surgery team from Mayo Clinic also reported the outcome of 7 septal myectomy surgery in patients with Noonan syndrome from 1999 to 2015 [14], which also proved a reasonable and acceptable early outcome for these patients. Although there were several reports on the surgery for Noonan syndrome, the sample size is all so small that this surgery is still under exploration. Our group is the first team to perform septal myectomy surgery for infant patients in China, and this is also the first case reported from Chinse hospital. And it is worthy to be confirmed that the septal myectomy surgery for Noonan syndrome patients with HOCM is scalable with substantial benefit for patients.